As keen as we are on affordable phones, the Nokia 2.1's performance tests your patience too much.

The Nokia 2.1 is one of the most affordable Nokia smartphones on the market. And it looks far less like a budget device than the Nokia 1.

For your money you get a large screen and a pleasant minimalist design. However, with the Moto G6 Play available for only around £30 more, we’d urge you to spend the extra.

Limited storage means the Nokia 2.1 can’t hold many apps, games or photos. And even if you need only the basics, a slow CPU and scant RAM results in even simple actions feeling laboured.

However, those with low expectations may find that the decent battery life is enough to keep them happy. 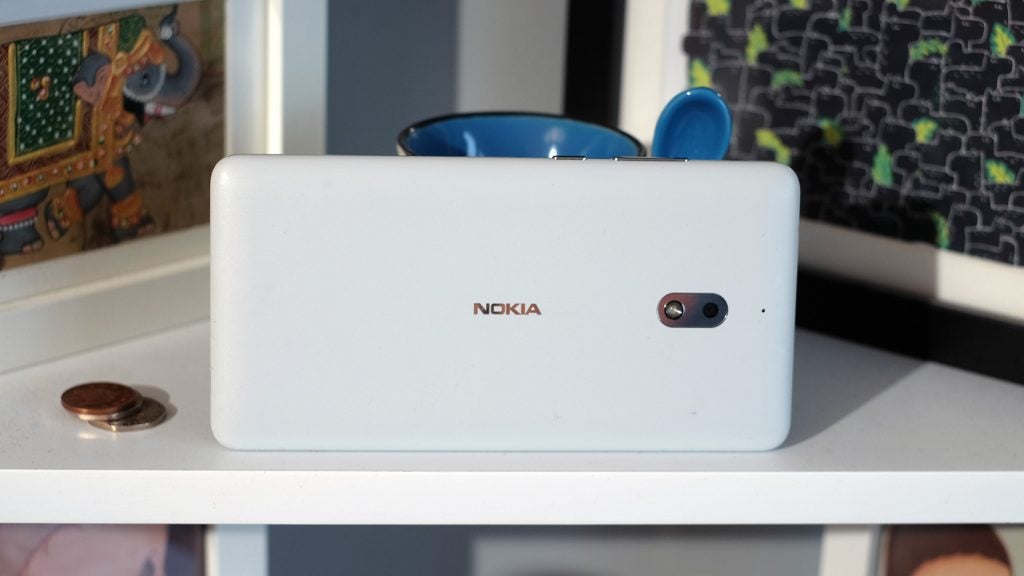 Phones as affordable as £150 – the Honor 9 Lite, for example – now use glass-heavy designs. Drop down to the Nokia 2.1’s price, however, and you downgrade to a plastic shell. The Nokia 2.1 neither looks nor feels refined.

As was possible with smartphones of old, it is possible to pop off the Nokia 2.1’s rear. The battery is locked in, but you can buy an aftermarket backplate if it ends up looking a little pocket-scarred.

Almost all of the Nokia is 2.1 plastic, aside from the volume and power buttons, and this includes the silvery band around its middle.

The handset is quite large, which ensures it doesn’t look too cheap and basic a phone from arm’s length. This isn’t simply a handset for calls, texts and the bare app essentials – that’s the Nokia 1’s job. 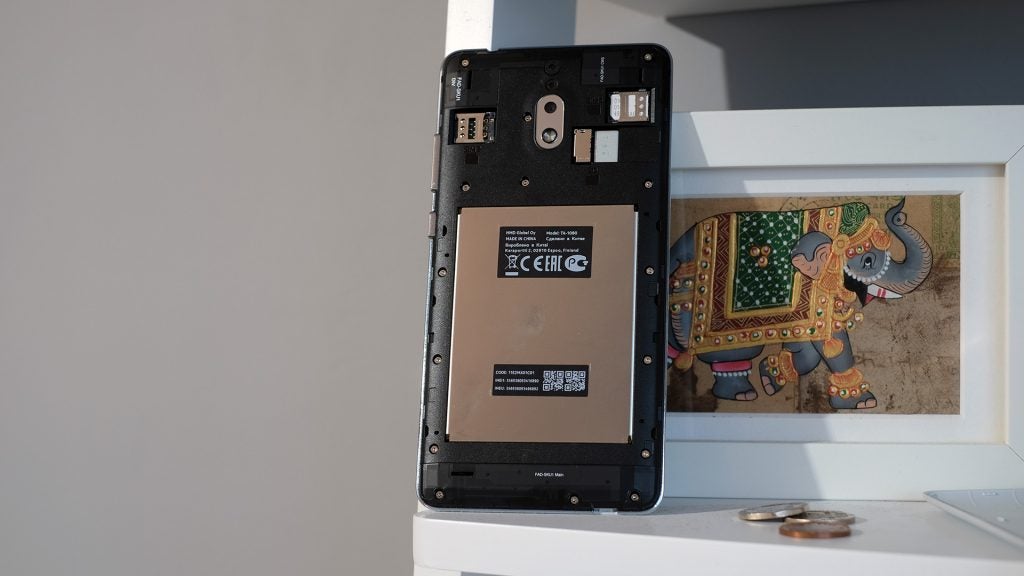 The 2.1 is a great device for watching YouTube or Netflix, or for reading books on your phone. Bear in mind the Nokia 2.1 is reasonably large, though. It’s almost the same width as the iPhone XS Max, and may be a bit much for the small-handers out there.

If you want a tiny phone the Nokia 1 is, again, the model to check out. Or one of the even simpler Nokias, such as the Nokia 8110.

Aside from large size, the Nokia 2.1 is still fairly simple. There’s no fingerprint scanner or water resistance rating, and the charge port is a microUSB rather than the newer USB-C style. This is still the standard for sub-£100 phones, though.

The Nokia 2.1’s speakers are surprisingly solid. There’s zero bass, but there are two drivers on the front, for stereo sound. 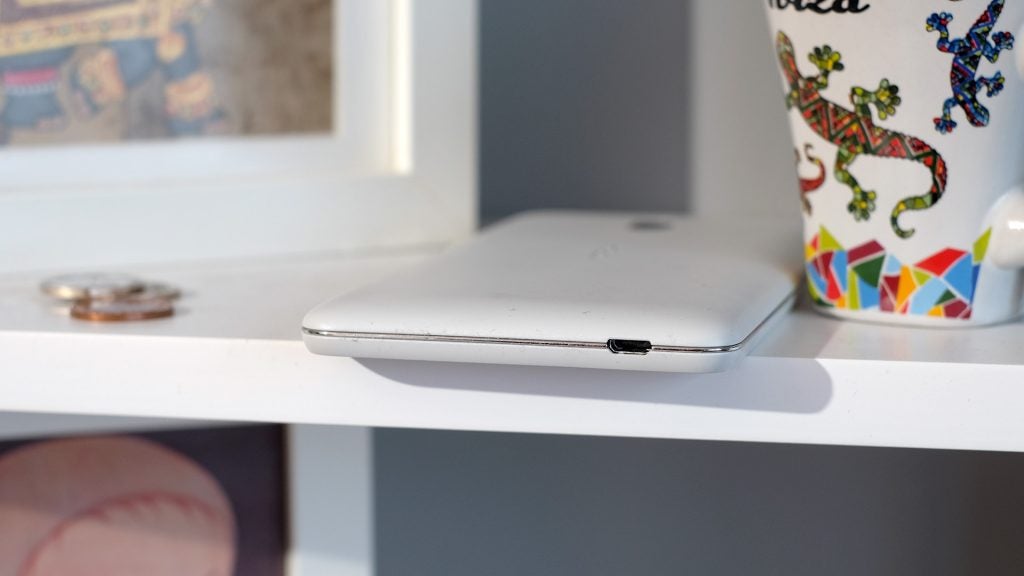 The Nokia 2.1 has two main features to show off. One is its large battery, the other its large screen.

It’s a 5.5-inch IPS LCD. And as this is of the older 16:9 size rather than the more elongated style almost all more expensive phones have, it’s actually equivalent to roughly six inches in that format.

There’s a lot of room. Resolution is a relatively low 1280 x 720 pixels, but it’s sharp enough to make games and movies look good. 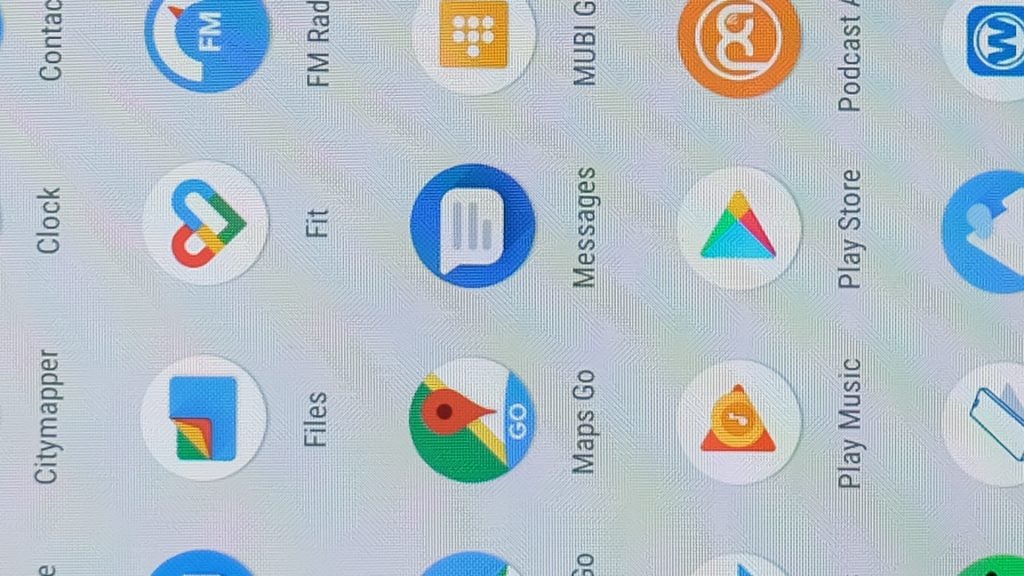 There are other compromises, of course. Colour is much less saturated than most phones a tier above, and while contrast is good there’s a slight blue hint to the blacks. This screen does not let the Nokia 2.1 down.

An upgrade to the Nokia 3.1 does get you a more robust display design, though. The Nokia 2.1 has an “unbranded” tempered glass screen, not Gorilla Glass. Press down firmly and you can make the image distort slightly. However, you can do the same with some entirely flat Gorilla Glass screens.

The Nokia 2.1 has an oleophobic screen too, making fingerprints less noticeable. 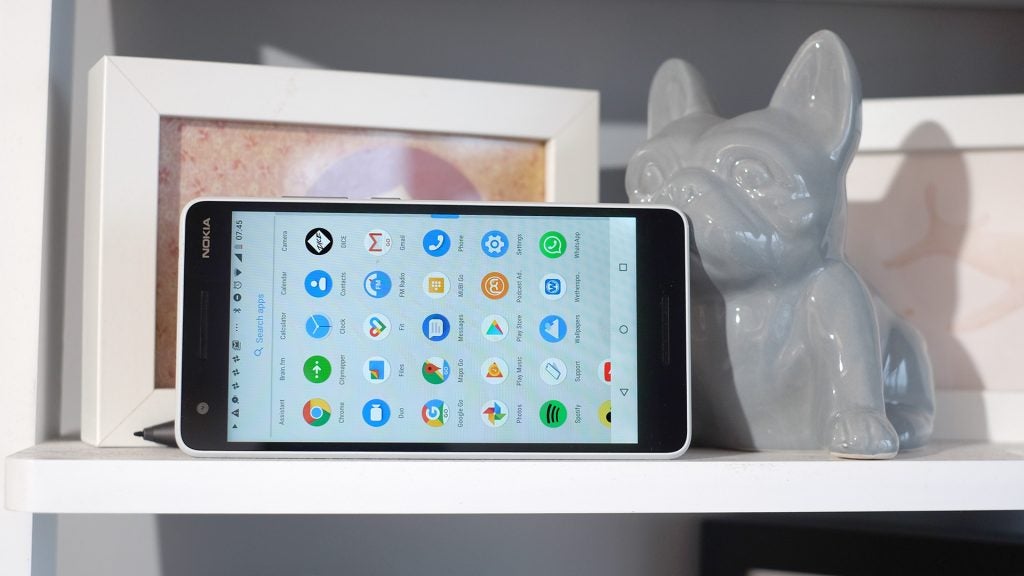 The Nokia 2.1 runs Android Go, a version of the mobile system made for low-end phones. It needs less RAM, uses less storage, effectively turning the system requirements into those of the core Android system several years ago.

You won’t notice huge visual differences between this and the other vanilla versions of Android. Go looks clean, and still has some transparency animations when you flick between the apps menu and home screens.

The versions of Google services on offer are the biggest alterations. Assistant, Gmail, Maps and the Google app are all “Go” versions. For the most part these look and feel very similar to the standard ones. Maps does lack a few very useful extras, though, including saving areas for offline use. 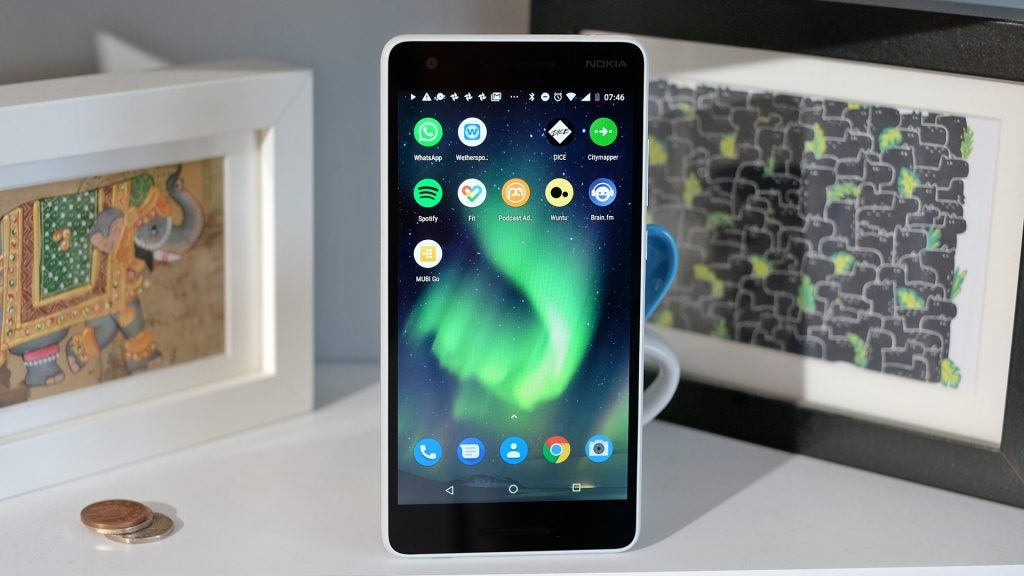 Android Go is, just as promised, like normal Andorid but uses less space.

You are still extremely limited when using the Nokia 2.1, though, because of the low storage. The phone has 8GB. This would be borderline unusable with standard Android. Here, you can install Asphalt 8 and have just under 1.4GB left.

You have enough room for one large game and a bunch of photos. But unless you install virtually no apps, and take barely any photos, you will run out of space quite quickly. The Moto E5 also has double the storage, a much more comfortable amount if you actually want to do anything active with your mobile.

As the phone only has 1GB RAM, multi-tasking is poor too. Most Androids do not use the same kind of side-by-side multi-tasking as a Windows computer. Instead, apps are held in a frozen state when you leave them, and are brought back to life in-tact when you open them back up. However, this requires RAM. With only 1GB these apps are quickly closed fully.

It will even close down apps with “active” background processes. For example, during one weekend with the phone I listened to a podcast using Podcast Addict and used TripAdvisor find somewhere to have lunch. The Nokia 2.1 has so little spare RAM it closed down the podcast app, cutting out the audio just because another app was running. Annoying, right? 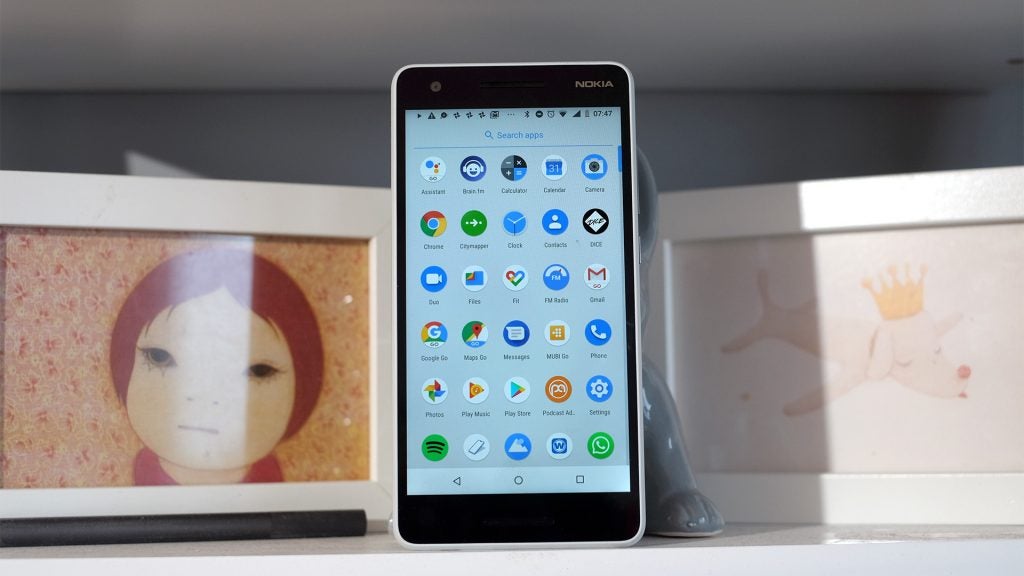 General performance is limited too, and becomes almost unbearable as you get close to running out of storage space. The Nokia 2.1 has a Snapdragon 425 CPU, a quad-core processor, where some phones just a little more expensive have eight cores.

This phone isn’t initially annoyingly slow like some even cheaper models. Apps do take a little while to load, though, the virtual keyboard often pops-up more slowly. There’s a certain lethargy with which phones of this level of power operate. And you have to flush out storage fairly regularly to stop it from all-but grinding to a halt.

To get away from this treacle glaze, consider an upgrade to the excellent Motorola Moto G6 Play.

There’s a slightly surprising side to the Nokia 2.1 performance too, though. It can handle some good-looking games reasonably well. Asphalt 8 is enjoyable at “mid” graphics, just not “high”. The game still looks great at the lower setting. Casual games? No problem, as long as you don’t play a title like Egg Inc where small armies of objects end up on the screen as you progress.

Storage is the main block to the Nokia 2.1’s hopes as a gaming phone. It just doesn’t have the room for enough stuff.

The Nokia 2.1 has a basic 8-megapixel rear camera. It offers just what we would expect from a basic sensor. 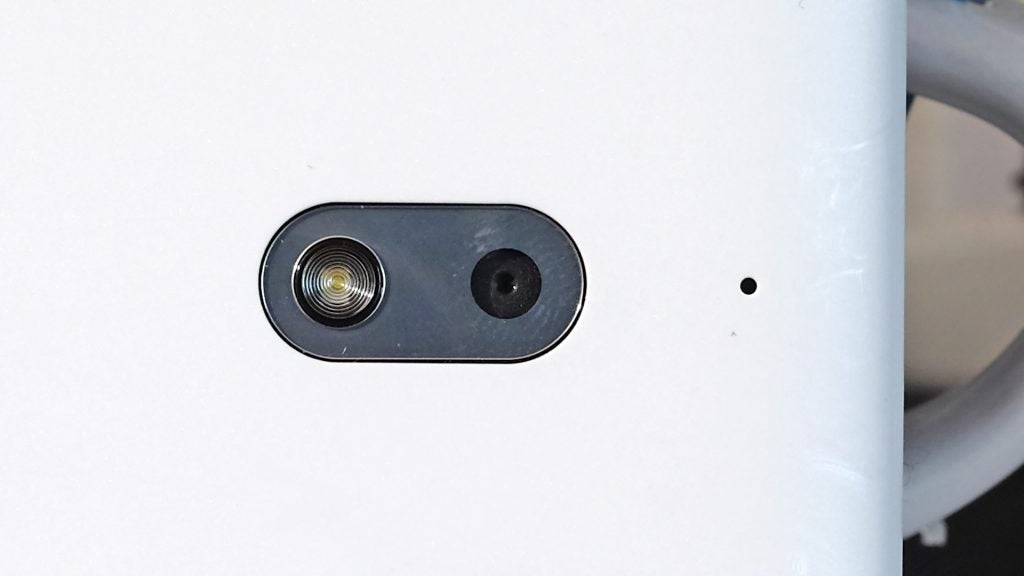 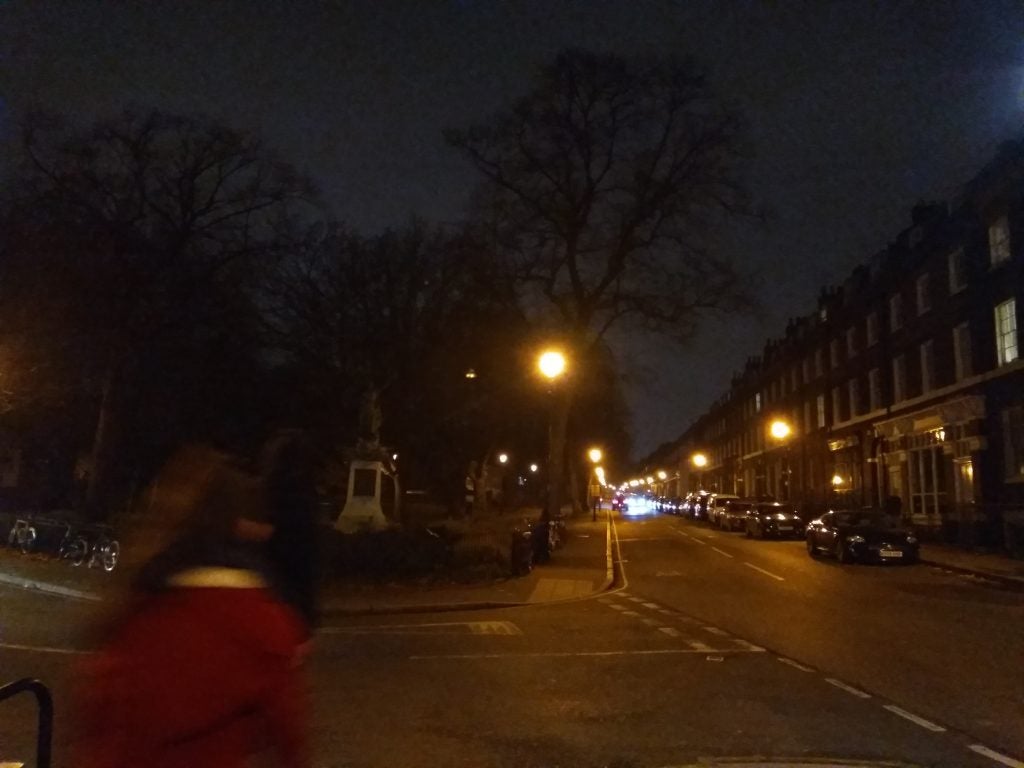 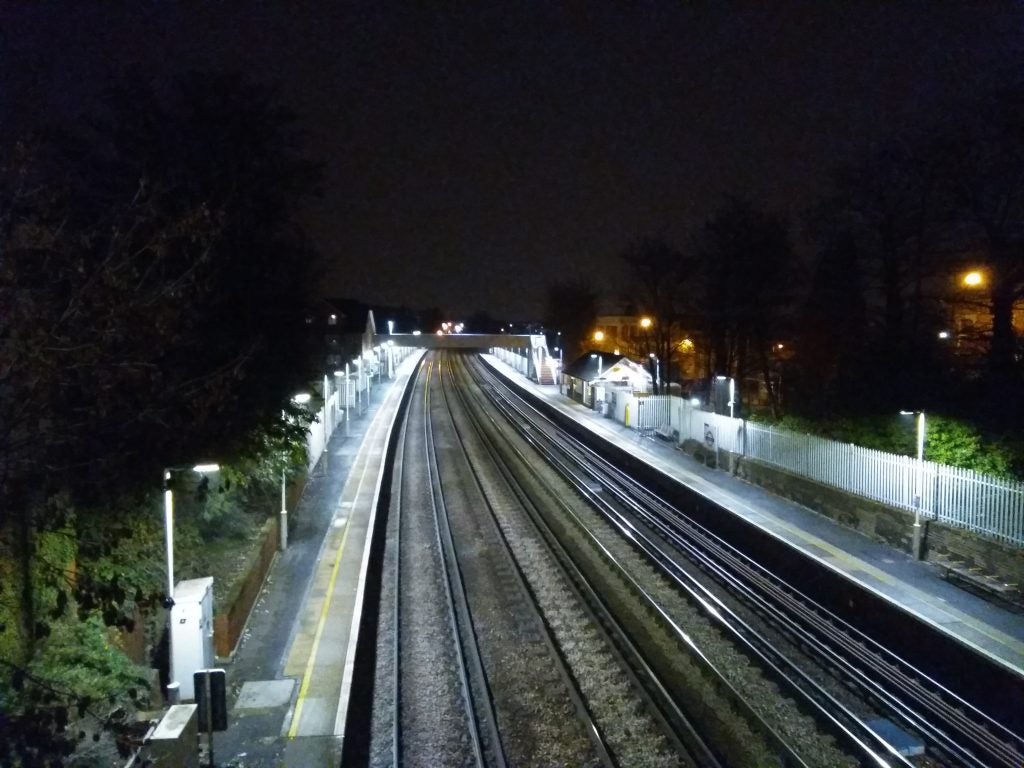 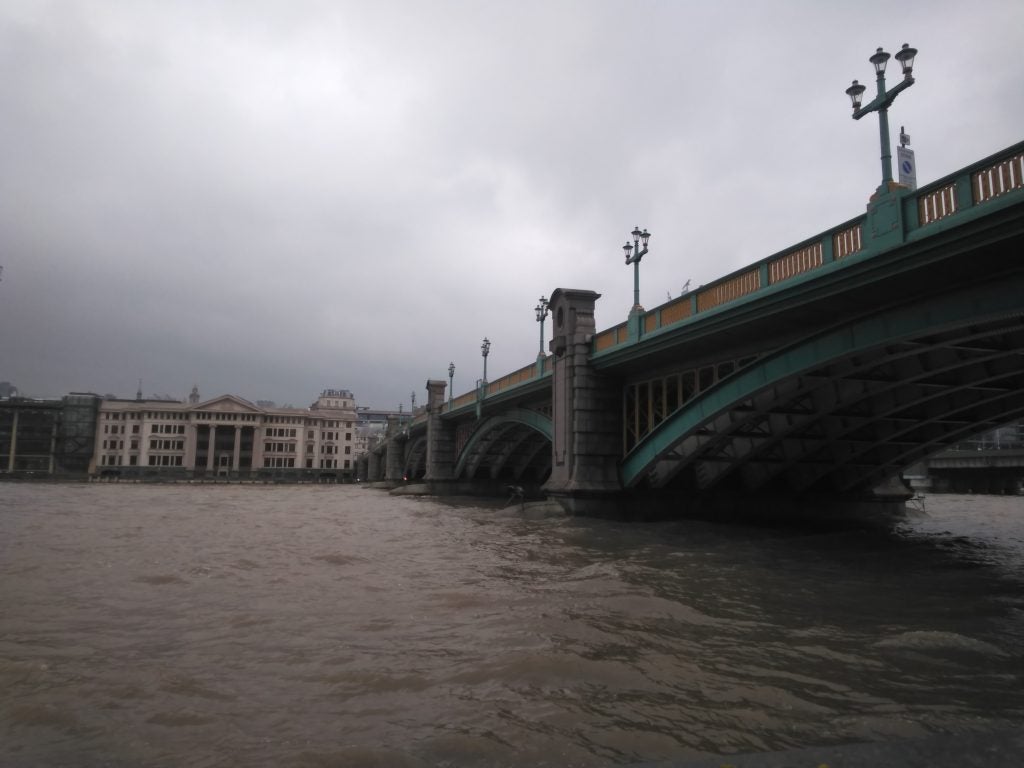 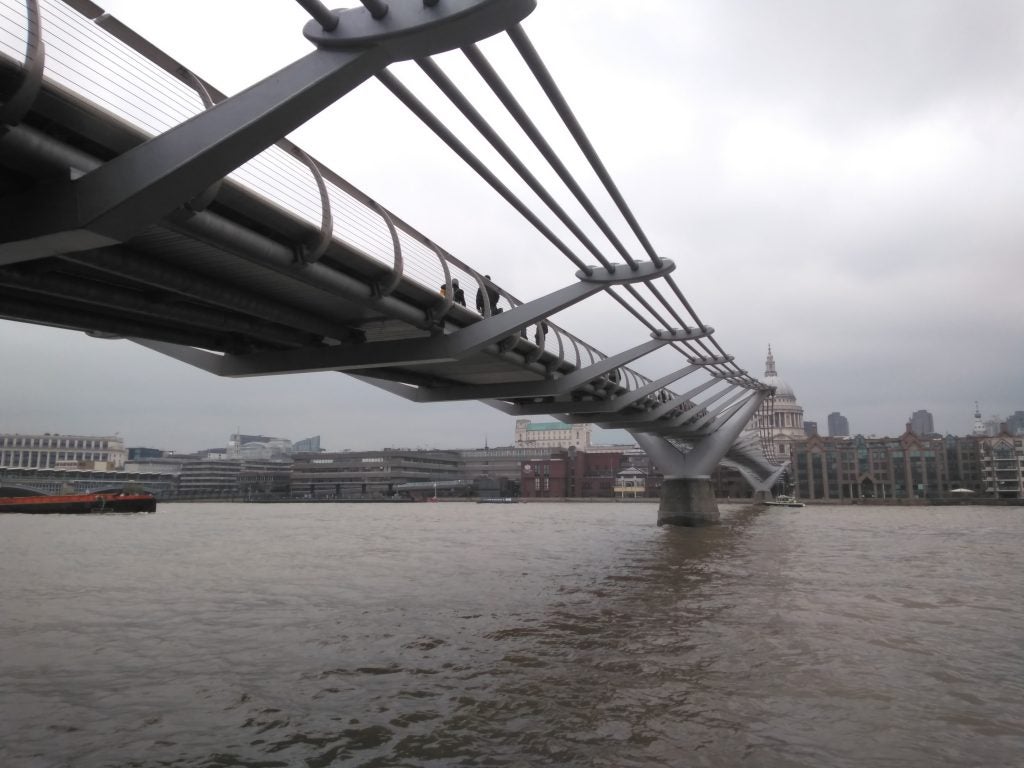 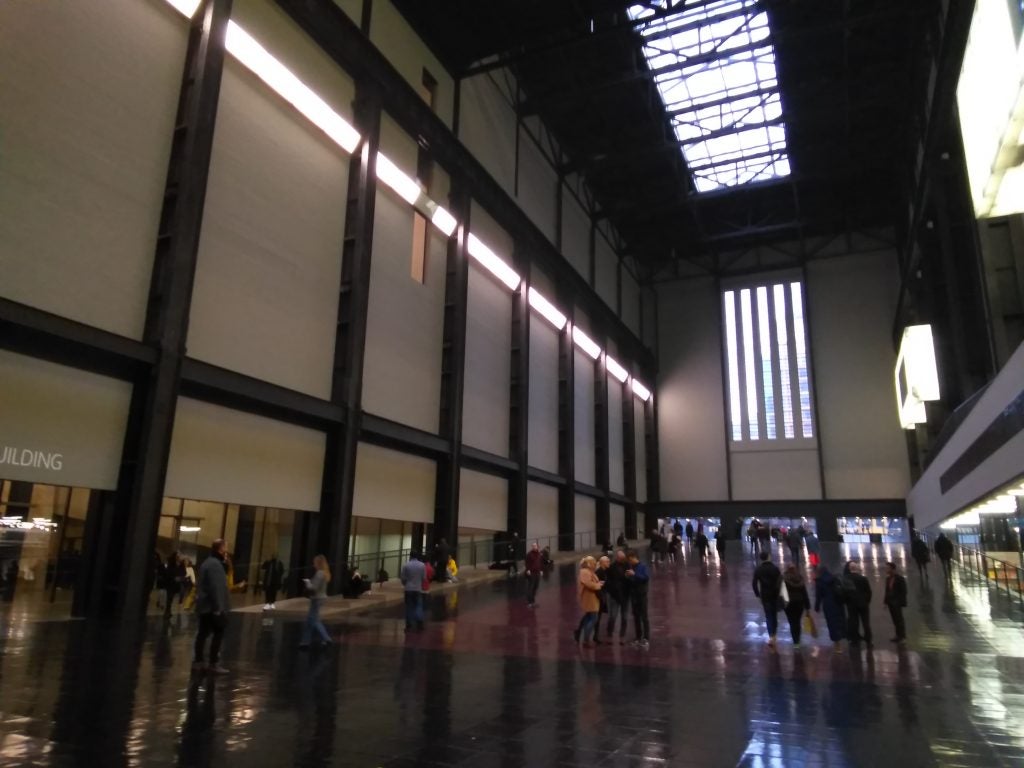 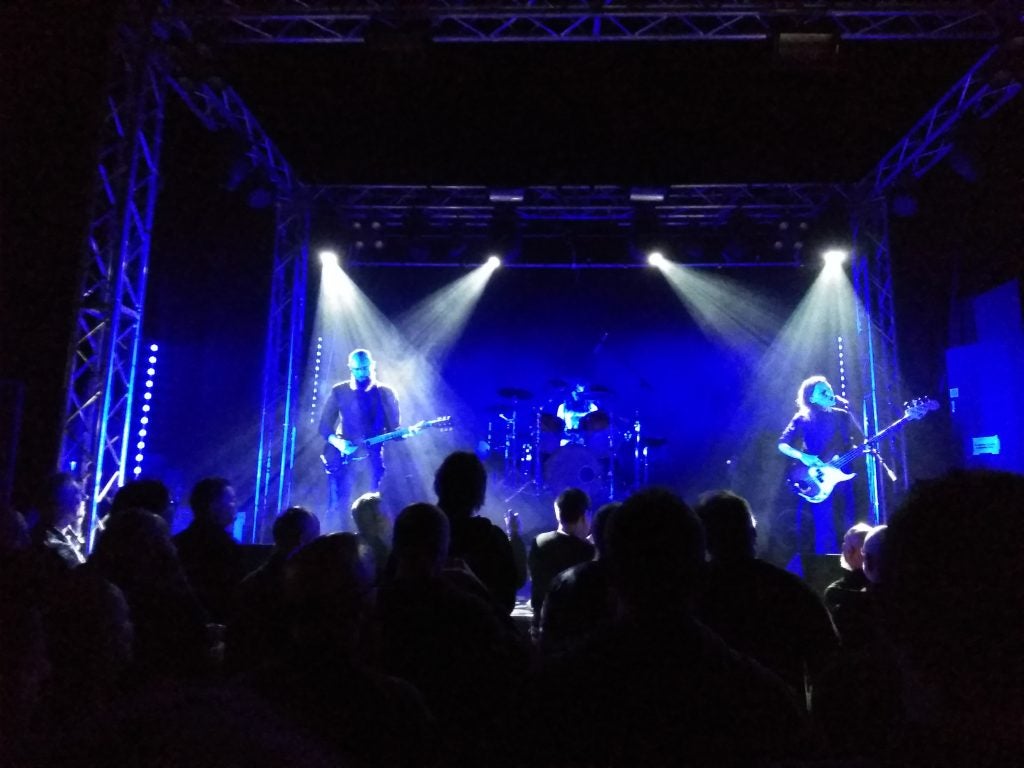 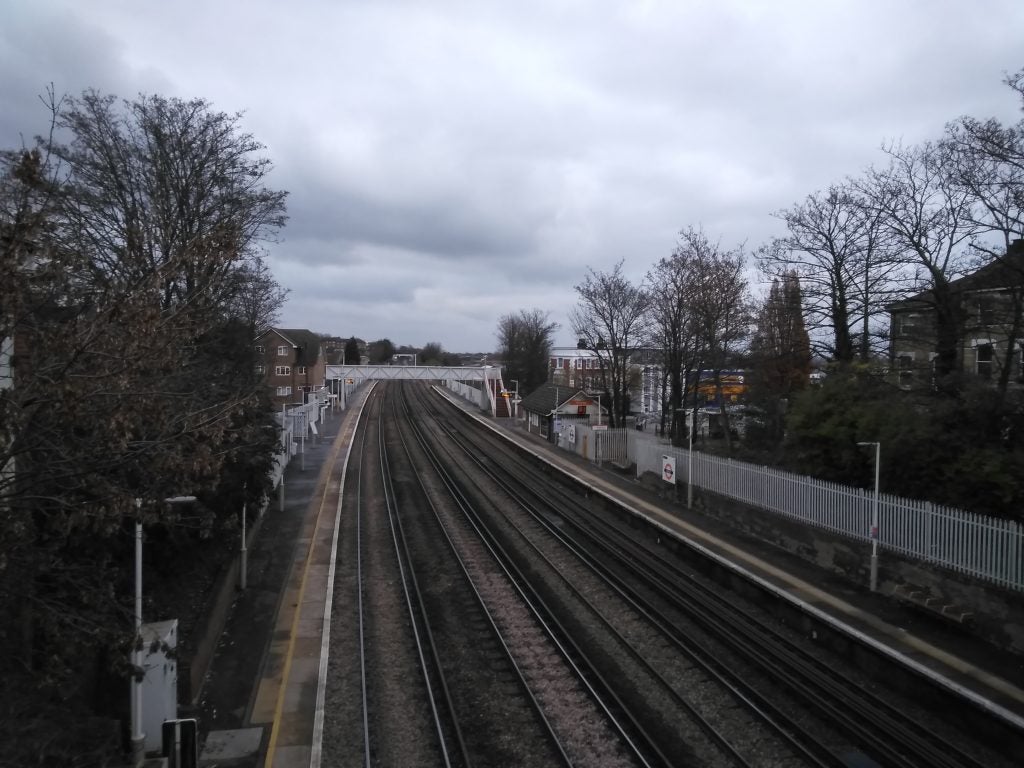 There is an Auto HDR mode, which is a pleasant surprise in a phone with such a basic camera. However, use it and you can see why Nokia decided not to activate it as standard.

Shooting speed with standard non-HDR shots is good, but a lengthy pause is introduced whenever you use HDR. This is because all the processing is done in a serial manner. The Nokia 2.1 finishes compiling the HDR image before you can shoot another, where other phones beaver away in the background, letting you carry on shooting.

Is this more-or-less the kind of experience we expected from a phone with bottom-rung camera hardware? Yes. Adjust your expectations similarly.

The front camera is feels quick and responsive, but again image quality is not great. Selfies often have a milky quality and fine detail is indistinct.

Both cameras can shoot video at up to 1080p, but there’s no software stabilisation so you can add a juddery look to uninspiring image quality.

Cameras are clearly not a focus of the Nokia 2.1. Battery life is. The phone has a 4000mAh cell, following the Moto E5 and Moto G6 Play by aiming for two days of real-world use.

This is perhaps the best choice Nokia made with this phone. Battery life is excellent. The Nokia 2.1 outlasts almost every phone in every single price class, right up to models ten times the price.

Like almost any high-capacity phone, you’ll only get two days’ use if you are not a heavy user, though. I stream a lot of audio, and watch the odd YouTube video. The Nokia 2.1 lasts around a day and half with this sort of use.

There’s no fast charging or, obviously, wireless charging. The Nokia 2.1 is a phone you’ll want to charge overnight. 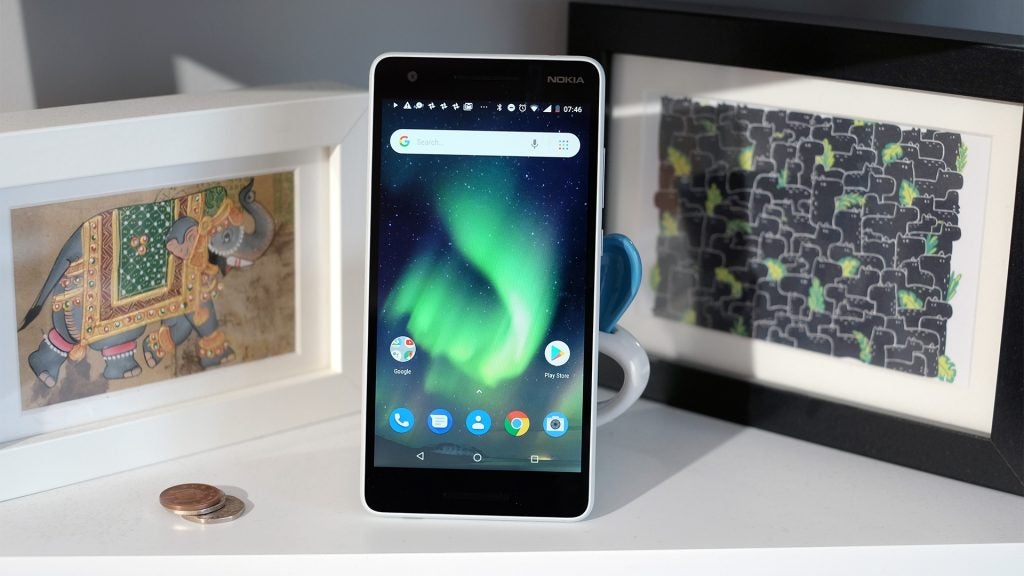 The Nokia 2.1 has a good screen and a large battery, which will last two days for some people. However, it’s only a sensible buy for someone who only uses a couple of apps, and has never experienced a good recent phone.

If you’re buying for a relative still using a feature phone, or an Android so out of date it seems from a different era, the Nokia 2.1 makes sense. However, much as we’re completely on-board with the concept of a mobile “for the basics”, the general sluggish response to actions and extremely limited storage mean it’s still tough to recommend at £100.

Fill up the storage and the situation worsens, making the Nokia 2.1 borderline unusable. For just a little more the Moto G6 Play is a radically better phone.

As keen as we are on affordable phones, the Nokia 2.1’s performance tests your patience too much.