What is the Nokia 2?

The Nokia 2 is a new entry point in the resurgent Finnish brand’s smartphone range, slotting below last year’s Nokia 3 both in terms of price and spec.

This compact 5-inch phone will set you back just £99 up-front. This puts it well below what we’ve come to consider a ‘budget’ phone – the £150 Moto G5, for example. Even the cheap and cheerful Moto E4 currently costs around £120.

Take a look at our advice concerning the best budget phones that money can buy and a simple, brutal truth reveals itself. If you want a decent experience, you’ll have to spend more than £100.

Until now, it’s been a case of diminishing returns the further you drop below that £150 mark. Unfortunately, the Nokia 2 doesn’t quite do enough to reverse that trend – although it makes a fair fist of it in a couple of notable areas.

Perhaps the best thing I can say about the Nokia 2’s design is that it looks and feels like a Nokia phone. Prior to selling its phone business off to Microsoft a few years back, Nokia was better than anyone else at making an affordable phone feel premium.

Pick up the Nokia 2 for the first time and you probably won’t think this is a £100 phone. Weighing in at 163g and measuring 9.3mm thick, it has the heft and solidity of a phone going for two to three times the price.

An aluminium frame ensures minimal flexing, but the truly classic Nokia touch here is a removable plastic back that feels neither cheap nor nasty. It grants access to the SIM and microSD slots, but not to a removable battery. That really isn’t an issue, as I’ll go on to explain later. 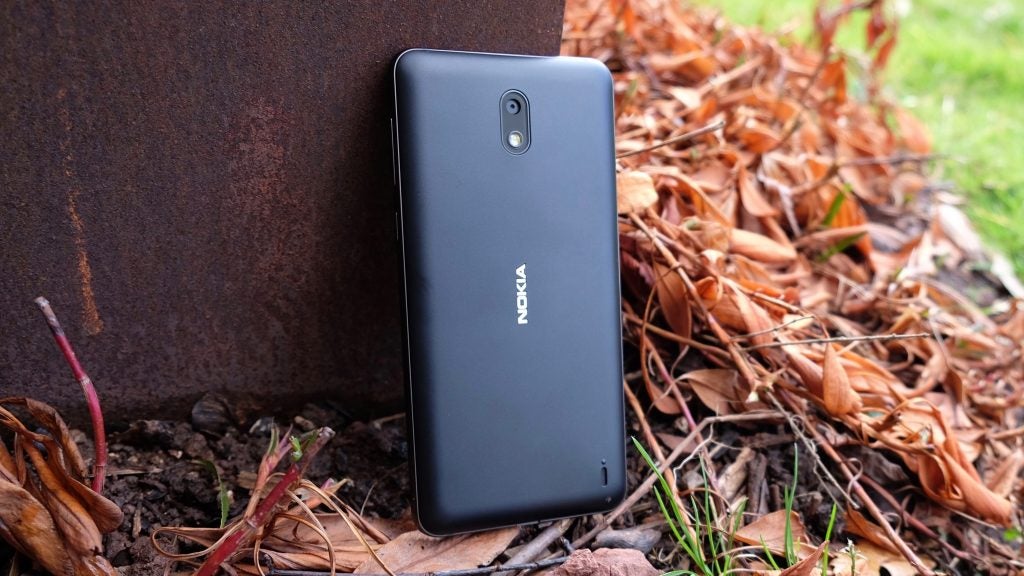 The power and volume buttons, meanwhile, are pleasantly clicky – although some might have preferred a little more travel.

The Nokia 2 is, quite frankly, a thoroughly pleasant phone to hold – which is far from a given at this bargain-basement price point. There are a few design features that immediately point to a cheaper phone, however.

One is its chunky bezels, with a particularly sizeable forehead and chin. The Honor 9 Lite showed that cheaper phones needn’t skip the reduced bezel revolution, so the Nokia 2 could end up looking awfully dated rather quickly.

The presence of micro-USB rather than USB-C for charging purposes is another telltale sign that we’re in budget territory.

Finally, there’s the complete omission of a fingerprint sensor. We’ve grown accustomed to seeing this component in the majority of phones above £100, and it’s a little jarring having to go back to Android’s laborious PIN entry system here.

I can’t really fault the Nokia 2’s display. Sure, it’s a smaller-than-average 5-inch unit with a sub-HD 720p resolution, and it’s LCD rather than AMOLED. But for this phone’s low price it provides more-than-adequate colour accuracy, sharpness and viewing angles, doubtless thanks to the use of an LTPS IPS panel. Meanwhile, that 720p resolution is just fine given the compact size of the display, packing in a perfectly respectable 294ppi.

Brightness is on point for indoor and night-time usage, and the picture remains visible – if, admittedly, rather washed out – when you take it out into the daylight. 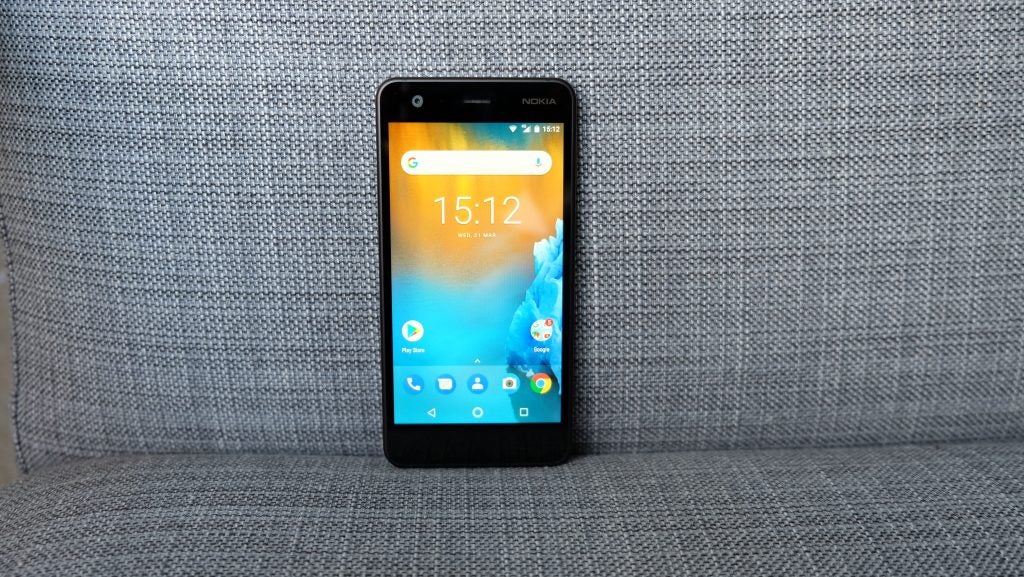 It isn’t an absolute stunner by any means, but the Nokia 2’s all-round decent display performance isn’t something you can take for granted at £100.

One of the major reasons affordable phones have grown so appealing in recent years has been the rapid improvement in processor technology, resulting in a much better user experience for those on a budget.

Unfortunately, the Nokia 2’s specs and performance seem to belong to the dark old days of severe compromise. Everything here – from incidental menu animations to app switching to surfing the web – seems to happen in slow-motion. And not the super-smooth slow motion that modern cameras can capture either.

Simply using the Nokia 2 for general everyday tasks proves to be a sluggish, stuttering, deeply frustrating experience. It’s something you simply don’t get from the likes of the Moto G5 and it peers a little further up the price scale.

At the heart of this shonky performance is an underpowered Snapdragon 212 processor and, critically, just 1GB of RAM. We’ve said it before, but 2GB is the bare minimum you’d want for a decent Android experience.

Sure enough, a woeful Geekbench 4 multi-core score of 1140 is less than half the figure attained by the EE Hawk, which scored 2545 and currently sells for just £120. 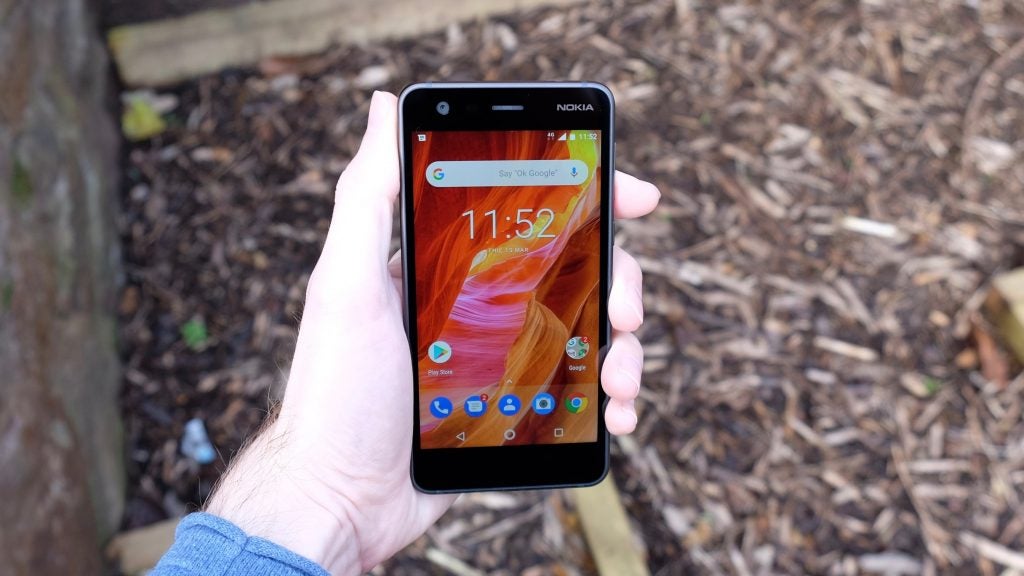 The result of this performance shortfall was clear to see when I attempted a spot of gaming. Regular 2D fare such as Wayward Souls played perfectly well, as did the simple 3D platforming of Super Mario Run. However, fast-paced online FPS Guns of Boom was borderline unplayable – and this is one of the better-optimised 3D games on the Google Play Store.

You might argue that expectations need to be lowered in line with the Nokia 2’s price tag, but when you can get fluid gaming performance from a phone at £20 to £50 more, that suggestion becomes tougher to swallow.

Elsewhere, a scant 8GB of expandable internal storage further reflects the phone’s sub-£100 price point. Just like the RAM allotment, this is arguably below the acceptable threshold for an Android phone as we move deeper into 2018 – especially with the Android OS itself taking up more than half of that 8GB.

Yes, you can always expand that storage allowance through the included microSD slot. But if you’re willing to spend extra on such a component, you might as well put the money towards a better phone with more internal storage.

Since its return to the smartphone-making fold, Nokia and hardware partner HMD Global have stuck admirably close to the Google software playbook.

The Nokia 2 continues the brand’s recent trend of running nigh-on stock Android, which makes for a thoroughly pleasant experience – provided you’re sufficiently patient with those sluggish performance issues, of course.

This isn’t the very latest version of Android, however. The Nokia 2 runs on Android 7.1.1 out of the box, with an update to Android 8.0 Oreo said to be in the works. Still, the basics are all present and accounted for. You get the kind of pure Android experience you don’t often find outside of a Pixel device, with a heavy reliance on Google’s own fine suite of apps and absolutely no duplicates.

So, it’s Google Photos for photo management, Chrome for web browsing, Google Calendar for scheduling, Play Music for audio playback, and Gmail for email. If you want an alternative, the Play Store is right there for you. 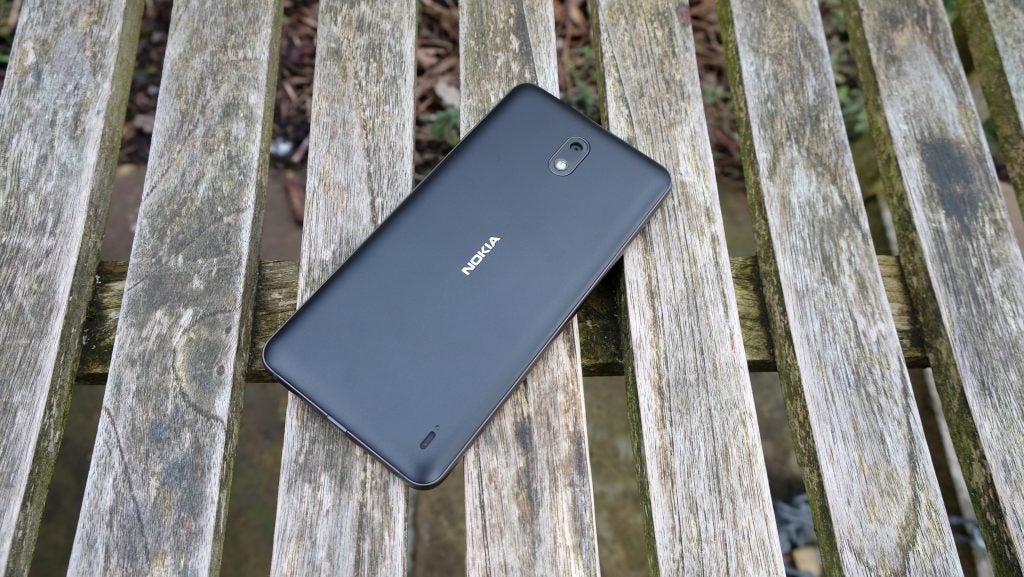 You also get the Pixel Launcher, which freshens up the homescreen in an officially endorsed way, with a drag-up app tray and crisp circular app and folder icons.

Swipe right to access Google Now – still handy after all these years and appearing with a reliable stutter here on the Nokia 2 – and bark ‘OK Google’ to activate Google Assistant. It’s Android as Google intended for just £100. Or, at least it would have been if the phone didn’t run like it does.

It would be nigh-on miraculous if any sub-£100 phone managed to produce a decent camera experience, and the Nokia 2 barely threatens to pull off an upset.

The phone has a few things going for it in this respect, including a nicely laid out camera UI, an HDR mode that’s set to auto by default, and a respectable-looking 8-megapixel main and 5-megapixel front camera setup. These aren’t attributes you’d necessarily associate with bargain-basement phones.

But it’s the shooting experience that matters, and the photographic results I achieved with the Nokia 2 were almost universally poor.

In strong day time lighting I found that the sky would tend to be overexposed, while forcing the HDR mode on produced a weird otherworldly glow, like some kind of cheap Instagram filter. Meanwhile, in anything less than ideal lighting the results were murky, noisy and indistinct.

Frame a shot just right – with plenty of natural ambient lighting and no bright skies or extreme shade – and the Nokia 2 can capture a reasonably accurate approximation of the scene. But such shots are both rare and frequently dull, and you’ll pick up lots of noise the minute you start looking closely regardless. 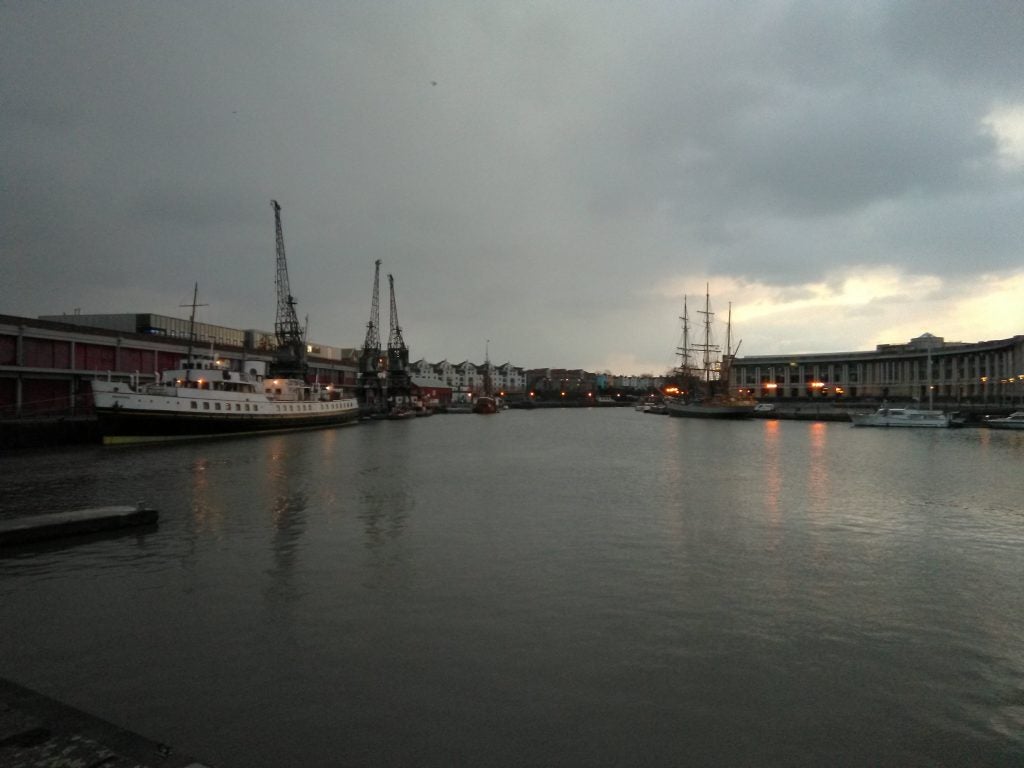 In less than optimal lighting, the results are murky 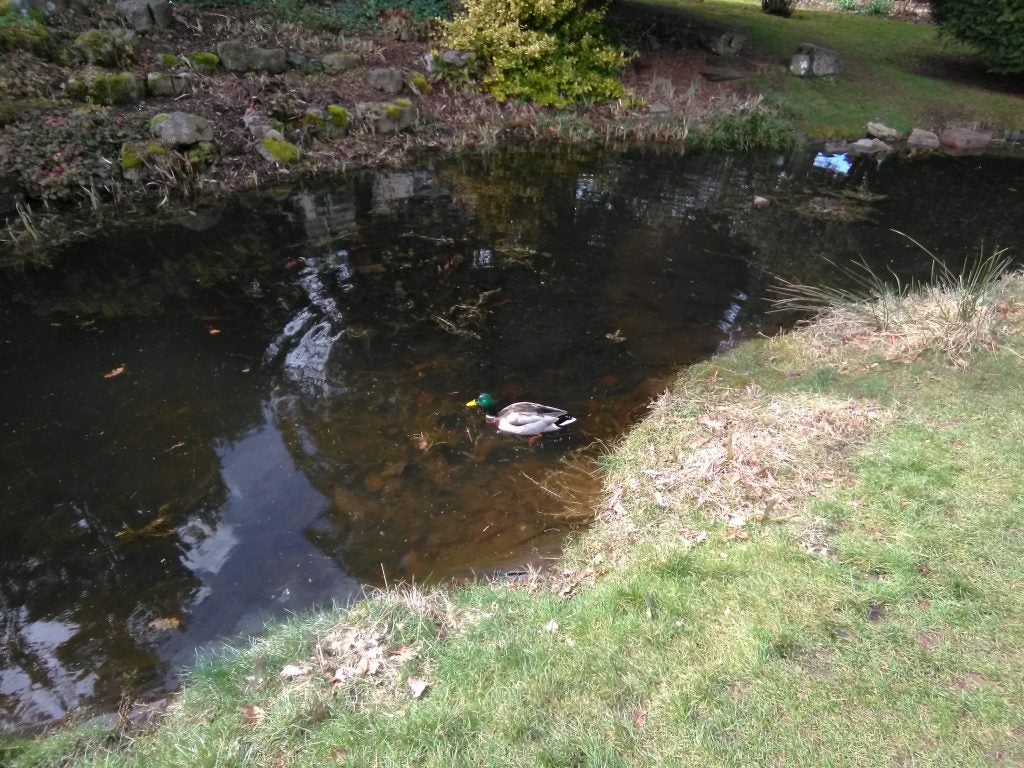 The duck is reasonably sharp and in focus; the rest not so much 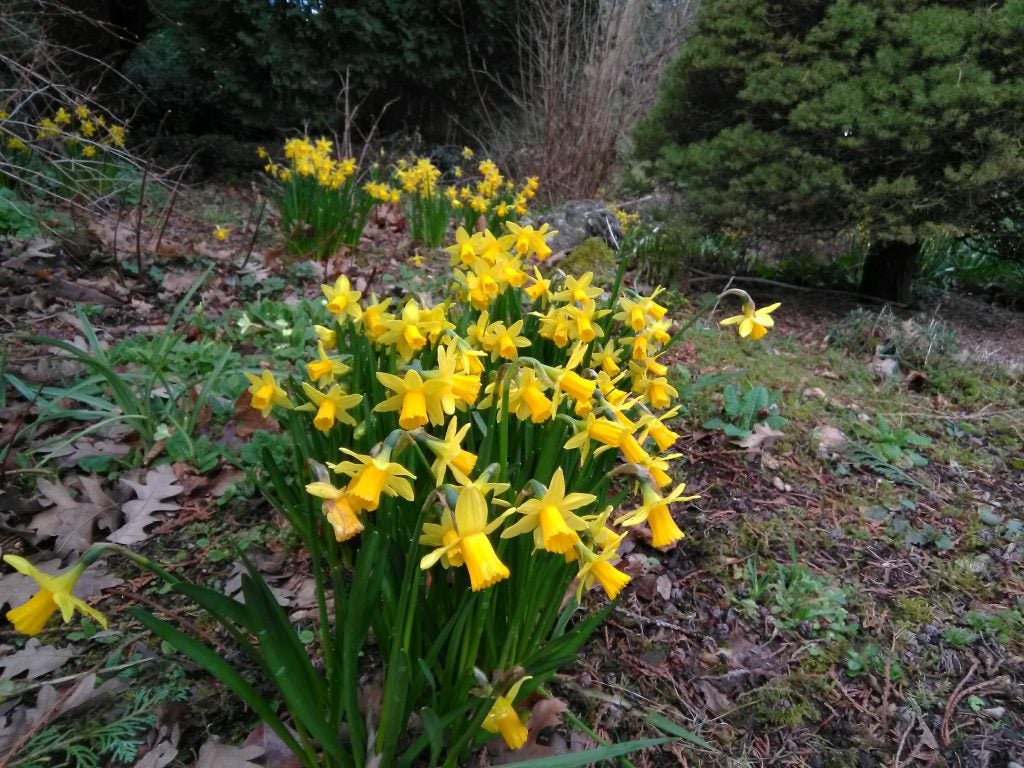 Another murky shot lacking in detail 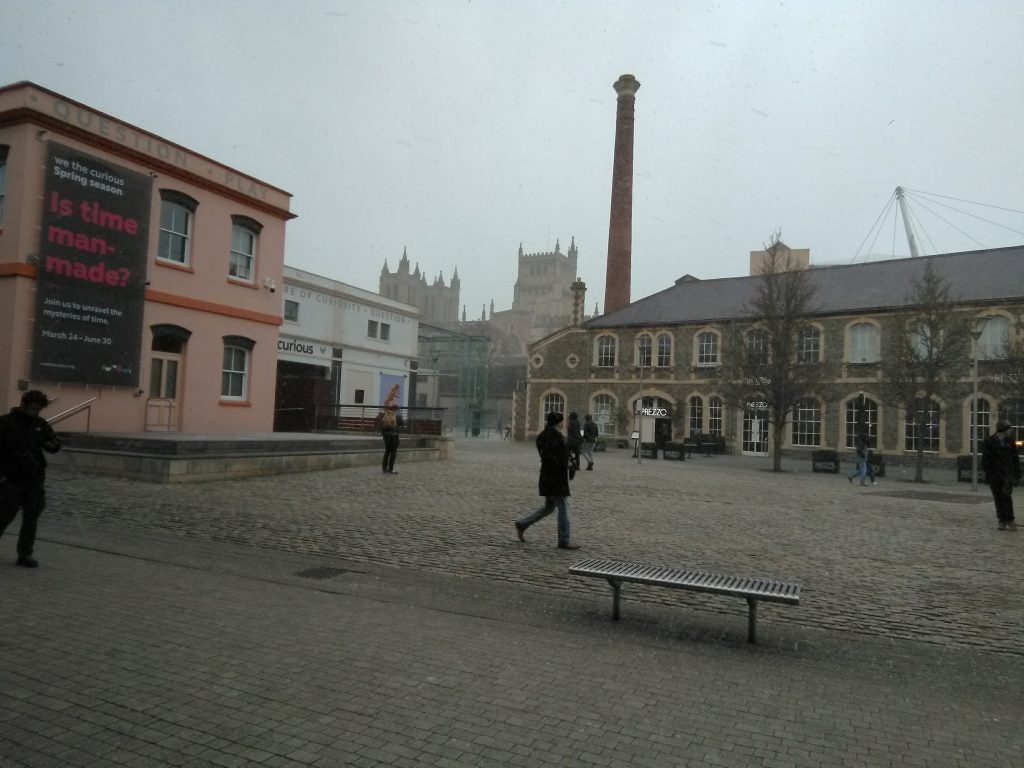 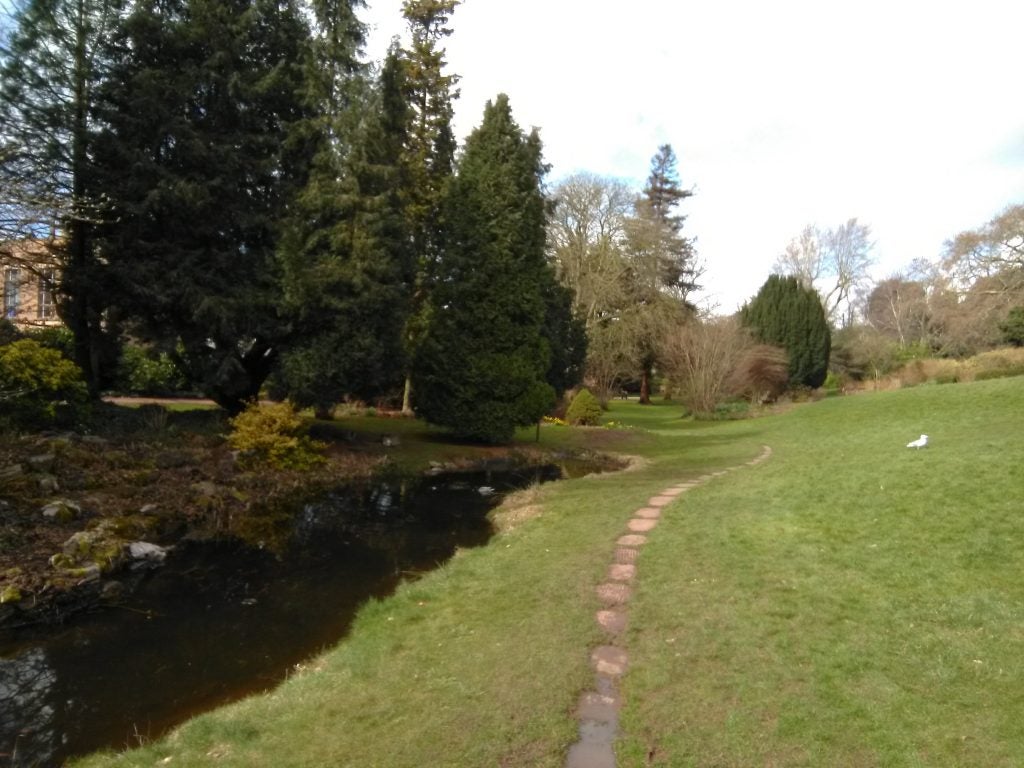 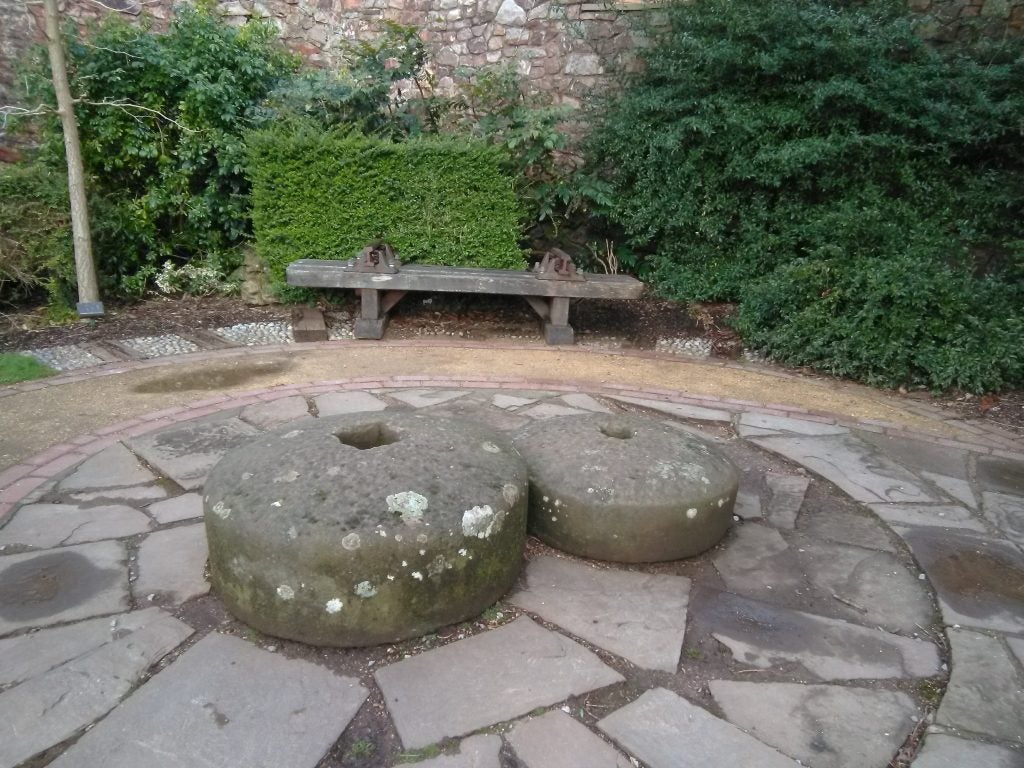 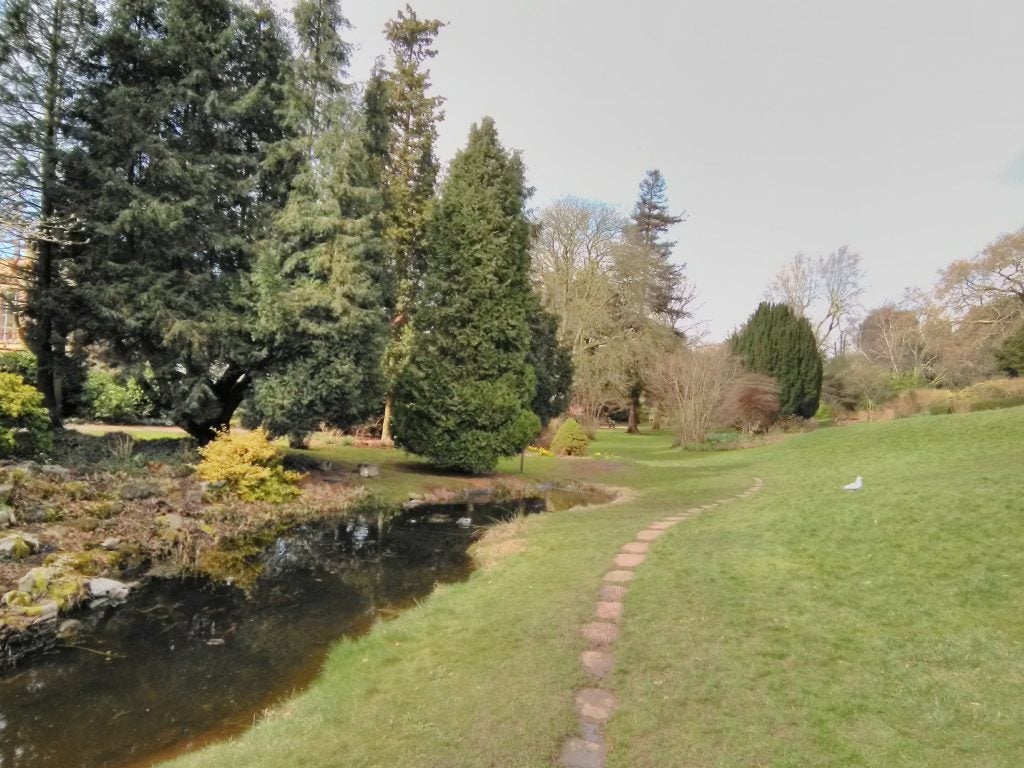 If the Nokia 2 is making any great play, other than with its pocket-friendly price, it’s with regard to its freakish stamina.

The phone’s 4100mAh battery would be noteworthily big in a power-hungry flagship phone. Here, on a phone with a tiny screen and a puny processor, it almost feels like overkill.

Needless to say, the results are pretty special. You’ll be able to clear at least two days with moderate usage, and quite probably longer. 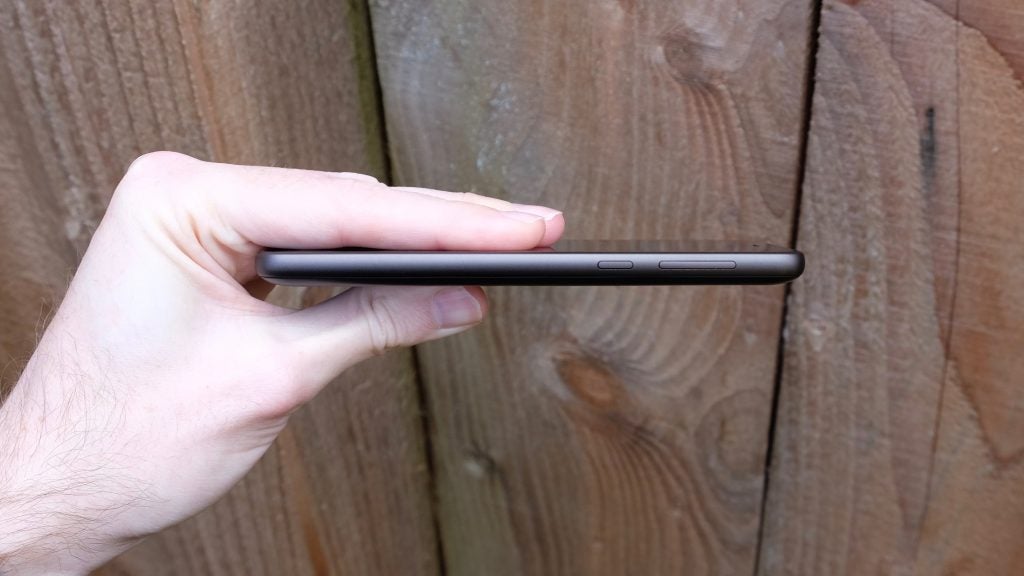 In terms of specific tasks, the Nokia 2 lost just 7% of its battery life after a 50-minute downloaded TV show with the screen brightness cranked up to full. To place that in some sort of context, the Honor 9 Lite lost 14% in identical conditions.

When it comes to a gaming stress test – arguably the ultimate battery drained – I’ve already mentioned that the Nokia 2 struggled to run Guns of Boom well. Despite this fact, it lost a commendably small 3% after 15 minutes’ play with the screen brightness set to half. Again, that’s half the loss of the average-performing Honor 9 Lite.

Why buy the Nokia 2?

The Nokia 2 is an immediately inviting phone that looks and feels far more expensive than it actually is. Its decent 5-inch screen and clean Android software only add to that feeling.

However, its £100 price tag only impresses up until the moment you start to use the phone. The Nokia 2’s general performance is simply far too sluggish and compromised for a modern smartphone, regardless of the price.

It’s a shame, because the device’s stamina is a cut above the vast majority of phones on the market. But the fact that it can’t even do the basics without a lengthy pause should make any potential buyer consider spending just a little extra.

The Nokia 2 is another cheap, well-built handset from the resurgent Finnish brand, but it simply doesn’t achieve the minimum level of performance that we expect from a modern phone.