Many of the best headphones you’ve never heard of come from Sweden. Jays and Nocs produce some of the most attractive mid-range and high-end hearphones you could clap eyes on – but because they hardly ever grace high street shelves, they mostly go unnoticed. The metal-bodied Nocs NS400 are earphones that deserve better treatment than this.

With buds made of titanium, they differentiate themselves from most sub-£100 earphones instantly. They’re a dead ringer for the Ultimate Ears UE700 (and UE400vi) and reminiscent of the Jays q-JAYS, but both of those pairs tend to sell for well over a hundred pounds. One point to Nocs.

Nocs has also lightly textured the surface of the titanium to avoid the slightly gaudy ultra-shiny look some metal earphones adopt, and – unlike the UE700 – the whole of the body is made of metal. They look fantastic; simple, not too showy (even the Nocs logo is very low-key) but with a design that clearly cares a lot about aesthetics. Unlike, say, Sennheiser’s IE 6. They are painfully, clearly aimed at the Apple crowd though, thanks to the exclusive use of white and metallic finishes. However, Nocs does offer a snazzy-looking black edition if you’re an iPhobe.

We imagine that many Nocs NS400 buyers will use at least one kind of Apple device, because they come complete with a remote control and mic housing designed for use with iPods, iPhones and iPads. It’s a stylish traffic light-style three-button affair that lets you switch tracks and change volume while listening to music, and take calls. It sits around 15cm from the right earpiece.

The housing and the metal build of the NS400 do not have a negative impact on weight, helped by the tiny size of the buds themselves. Bundled with a pretty generous six pairs of soft silicone tips, it’s easy to find a pair that provides a good fit. We felt no ear fatigue from these earphones, and happily wore them all day without discomfort. Another point for team Nocs.

The slightly rubberised and averagely thin cable isn’t particularly remarkable in look or feel. However, it has been reinforced with Kevlar to make it more durable. It’s non-removable, and while such a feature is far from the norm at the price, sets like the Shure SE215 are starting to introduce it to sub-£100 earphones. It’s 1.2m long and intended to fall down straight from your ears, rather than to trail over them. They will fit comfortably worn over your ears but the remote housing will hang just a bit below your earlobe, like a dangly earring – probably not a good look.

Thanks to the noise isolating design, these phones could be prone to microphonics – especially if you plan to go running wearing them – but the cable itself is not particularly prone to creating these annoying rumbles. Also, as a last resort, wearing them over your ears will reduce microphonics even further. A belt clip is included alongside the rubber tips, but you don’t get a case. The sound more than makes up for it, though.

The Nocs NS400 use 8mm dynamic drivers. At around £70, they sit at a price where the most tenacious headphone manufacturers start to move to balanced armature drivers – Phonak’s 012 use this kind of driver.

Balanced armature drivers tend to offer greater accuracy, making them a good choice for earphones that strive for a highly-detailed analytical sound. Dynamic drivers are renowned for their meaty bass performance. The Nocs NS400 prove that the kind of driver used doesn’t have to dictate sonic personality to the letter.

These earphones are highly detailed, with a prominent treble that once again reminds of the immensely revealing Ultimate Ears UE700. The high-end is less intense than that dual-driver model, but among dynamic driver buds of its class, the NS400 is one of the brightest. Aiming for a bright sound signature is as dangerous as focusing on bass (which can result in a boomy mess), with a high risk of sibilance and harshness. That deadly duo can make listening at a decent volume tiring or, at worst, outright painful.

We subjected the NS400 to dozens of tracks prone to sparking off sibilance and found that they performed extremely well, with adequate treble resolution to render bright material without any nasty effects. The tone of the high-end is uncoloured too, making them some of the best trebly earphones you can get for under £100. This is a definite improvement over some previous Nocs models, which over-did the top-end resulting in an unbalanced listen.

UPDATE: Further burn–in has resulted in an increase in bass response that has somewhat unbalanced the sound. Non-bassheads beware. As a result, we’ve dropped a point off the score.

Bass performance is also very good. It has the generous spatial volume associated with dynamic drivers, but doesn’t over-do it. The Ultimate Ears 400 offer greater low-end power, but the balance here is better, fitting in more convincingly with the rest of the output. Those willing to spend more (as in over £100) will be able to enjoy tighter, deeper, faster bass, but they’re commendable nevertheless. 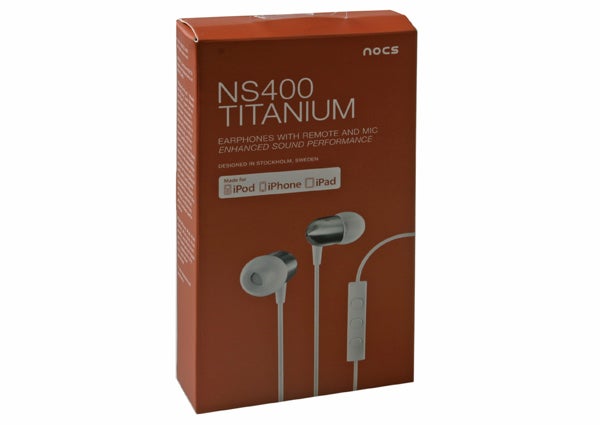 What we’d really like to hear from the NS400 is a little bit more mid-range texture and detail, to complement the top-end. However, if it managed this they’d be able to compete admirably with earphones costing a lot, lot more. Fingers crossed this is exactly what the dual-driver NS800 will offer.

If you don’t want to spend more than £70 on tiny little ear speakers, though, the Nocs NS400 are fantastic, offering more detail than the Jays a-JAYS Four and a sound signature with a high-end style that won’t tire your ears. We won’t be knocking Nocs any time soon but if you don’t care too much about looks the Phonak 012 offer better mid-range performance and slightly higher fidelity sound.

An attractive pair of earphones made using quality materials, the Nocs NS400 deserve more attention than they’ll probably get. Crucially, though, they sound great too, with performance that matches the very best available at the price. Plenty of detail, without trading in bass clout as a result.