Some of the best things come from Sweden – ABBA, Volvo estate cars and meatballs. Okay, so perhaps Sweden’s exports leave most things to be desired, but its Nocs earphones deserve to be heard. The Nocs NS200 sell for under £50, are made of tough aluminium and have a sound to compete with the best at the price.

The Nocs NS200 are innocuous in the best way. They use a matt black finish and a smoothly-curved bullet-style design. However, rather than coming across as drab and boring, the buds look pure and carefully deliberated-upon. It’s partly down to the hard metal construction, partly the smooth and perfect finish and partly how the Nocs logo has been daubed-on – subtly.

Their little metal bodies are much more likely to survive being trodden-on than a lesser plastic pair, but otherwise construction is entirely standard. The cable in non-removable and of standard thickness – although reinforced with Kevlar to up its chances against the world and its less hospitable pockets.  At the end of the cable sits a slim straight 3.5mm jack – not conspicuously ruggedised, but as such it’s in-keeping with the unadulterated look of the buds.

The rather spare Nocs style reminds of Apple’s official accessories, but in a good way – not being overpriced or brimming with self-congratulatory ego. Included accessories are minimal too. There’s a shirt clip and four pairs of rubber noise isolating tips, but that’s it. No carry case and no foam tips are bundled here. But as no-one we know uses an earphone carry case, we can’t say we care.

Nocs’s most notable extra is the remote and handsfree housing. There are two version of the NS200 – one made for iOS devices and another for HTC Android and Windows 7 smartphones. We checked out the latter, always being ones to support the underdog when given half a chance.

It’s extremely light and fits-in well with the rest of the design, being matt black and very simple, but behaves a little differently from the iPhone 3-button standard. Usually, the outer buttons will control both volume and track switching, the middle button handling pause/play and taking calls. Here, the outer buttons don’t change volume, instead just changing tracks with a single tap. However, it will also take calls as normal.

Both the iPhone and HTC versions of the NS200 earphones cost the same, but – intriguingly – according to the Nocs website, they use different drivers. Underneath all that aluminium, the HTC edition uses an 8mm dynamic driver while the iPhone edition is treated to an 8.6mm driver.  We’re checking with Nocs whether this is just a typo.

The Nocs NS200 strive for a sound signature similar to that of the Nocs NS400 – which recently became one of our favourite pairs of sub-£100 earphones. This sound signature is all about supplying good high-end detail with a slight extra kick of bass, for that fun sound that goes down a treat at this mid-range price.

For the most part, they sound great. They are well-disciplined and clear, with just a slight over-emphasis down low that doesn’t muddy the sound because it doesn’t creep up into the low-mid area. It provides the satisfying thud Nocs is after without coating it in the flabby blanc mange that turns us off most basshead earphones.

The overall tone is slightly brighter-than-average, with a tame enough mid-range to leave the Nocs NS200 sounding very open and wide for a pair of in-ear headphones. There are complaints to make, though. Given the bright-ish sound signature, they could do with an extra injection of treble resolution and fidelity – something that their series brothers the NS400 do offer. As a result, they can sound a touch harsh with challenging treble-heavy music and are altogether less insightful. However, with a mostly-balanced approach, they are happy to genre-hop all day long.

While the Nocs NS200 are clearly outperformed by headphones £30 more, such as the pricier Titanium Nocs N400 and the Phonak Audeo PFE 012, we should take into account £20 is a big chunk of the £50 price of these earphones. They’re closer to the Jays a-JAYS Four in reality – sparking off a civil debate, as Jays is also a Swedish manufacturer. 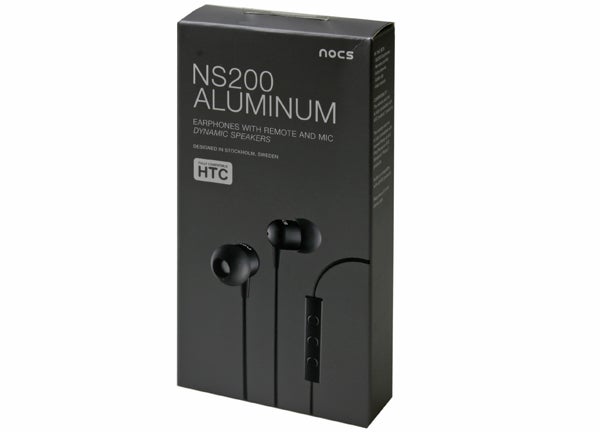 The Nocs pair offers more bite, more attack, but the comparison brings-up the slight treble deficiency of the NS200, the Jays sounding smoother and a little more refined. However, the NS200 demonstrate better control down low.

The audio pedant’s rabbit hole only gets deeper as you crawl further down it, though, and we still think the Nocs NS200 represent a great route into high-end headphones. However, if you can afford the £20 bump-up to the NS400, we’d take it – possibly even if you’re an HTC user, which the more expensive set doesn’t specifically cater for.

The Nocs NS200 are one of the few pairs of earphones to cater specifically for HTC phone users, whether running Android or Windows 7. And while the functionality on offer in the remote isn’t at iPhone level, we appreciate Nocs’s inclusive approach. Their sound quality is great too, offering well-behaved but powerful bass and good balance. Slight treble harshness stops them from netting top marks, though.