With its high-resolution screen, the Nixplay Smart Photo Frame 9.7 inch is a great way to pull out your photos from your computer or phone and put them on display. The limited (15s) video clips on a free account seems a bit of a harsh restriction, and the app can be a touch fiddly to use at times, but overall this is a neat and powerful smart photo frame that integrates with a lot of services, including Google Photos.

Digital photos frames were something of a naff trend a while ago, but thanks to improvements in screen technology, not to mention Wi-Fi, they’re starting to make a comeback.

If you’re looking for a convenient, high-resolution way to show your photos (and some videos), the Nixplay Smart Photo Frame 9.7 inch could well be for you.

Design – Looks like a photo frame, particularly if you have the silver version

There’s a choice of two versions: black or silver. Although both offer roughly the same features, there are some differences. The silver model, as I have on review here, is built to look much more like a regular photo frame and does that job well. 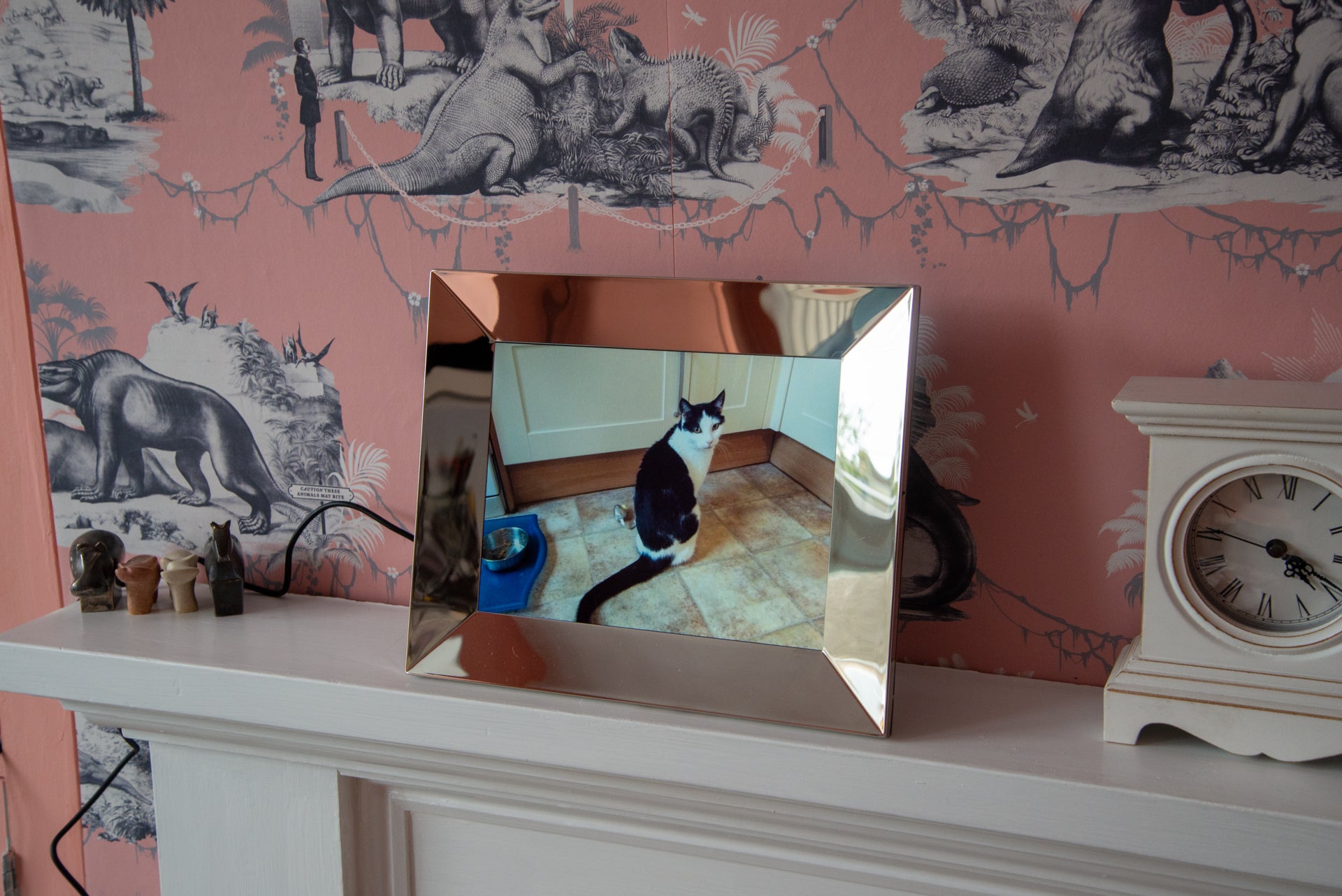 The black version with its matt black plastic frame looks a little cheaper, and it looks far more like a tech product particularly with the two cutaways for the motion sensor (the silver version doesn’t have the motion sensor).

Otherwise, both versions are the same, with a neat patterned back that you’ll never see, and a clever bendable stand that doubles as the power input. This flexible stand lets you set the photo frame in landscape or portrait modes easily. 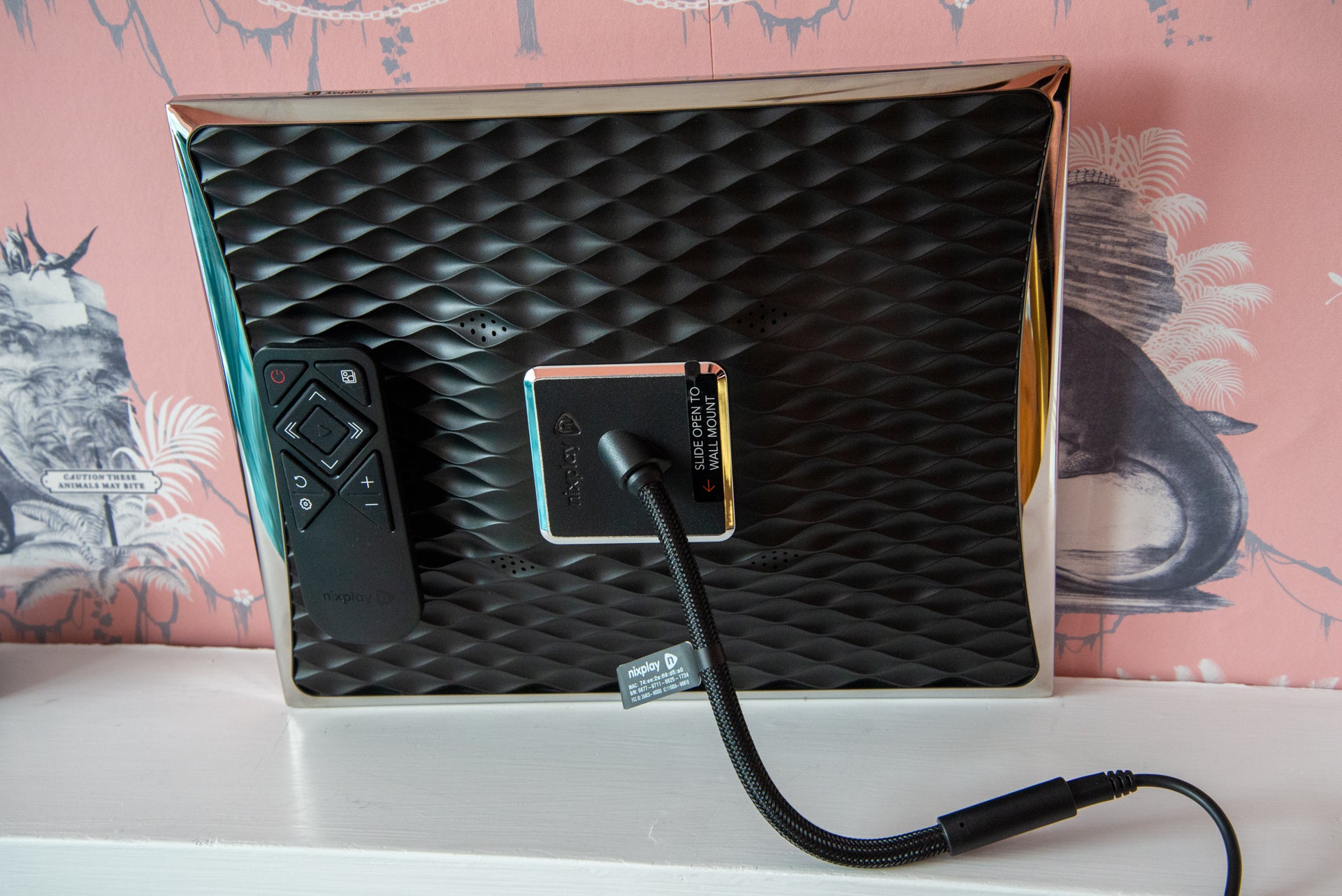 You can also slide the stand off and wall-mount the photo frame, although you’ll need to choose the orientation you want it in. Of course, there’s a cable to hide, as with other digital photo frames, but it’s not too hard to keep this out of sight in most installations.

Although the Smart Photo Frame can be controlled via the app, there’s also a remote control that magnetically attaches to the rear of the frame to keep it out of sight. It’s handy to have this, letting you change what you’re watching or simply for turning off the screen when you’re not using it.

As the Nixplay Smart Photo Frame 9.7 inch is all about showing off your photos, you’ll be pleased to know that there are lots of ways of getting images onto it using the app or web interface, once you’ve connected the frame to your Wi-Fi network.

Via the app, you get send photos and videos directly from your smartphone; you can use the web interface to upload photos directly, too. You get 10GB of cloud storage for free, although the service will automatically resize images to fit the device that you’re using to save on-device space. 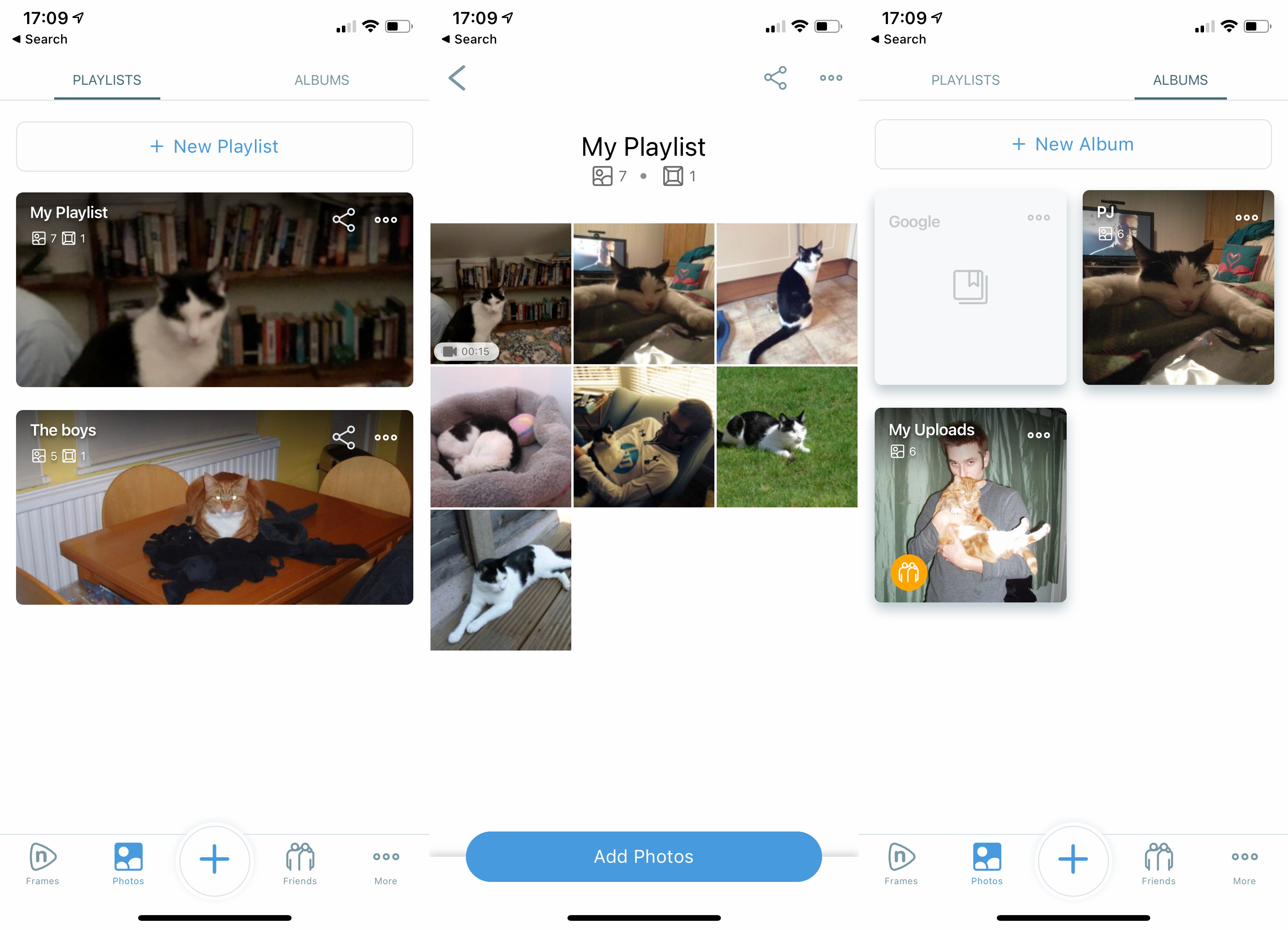 The Nixplay Smart Photo Frame 9.7 inch comes with 8GB of storage onboard, which acts as a cache for online photos; in most cases, then, if your frame goes offline, you’ll find that you’ve still got your current set of images. You can’t upload images directly to the frame and there’s no microSD card slot or USB port for local images, either.

How you play photos is a little confusing. As you upload photos, you can put them into albums, but you can’t play an album on the Photo Frame. Instead, you have to create a playlist and then choose photos from multiple albums. In effect, you may find yourself doing the same thing twice.

One easier way to get around this is to create a dynamic playlist that uses Google Photos. Doing this, Nixplay will pull in photos from the chosen Google Photos Album, updating automatically as you add and remove images. 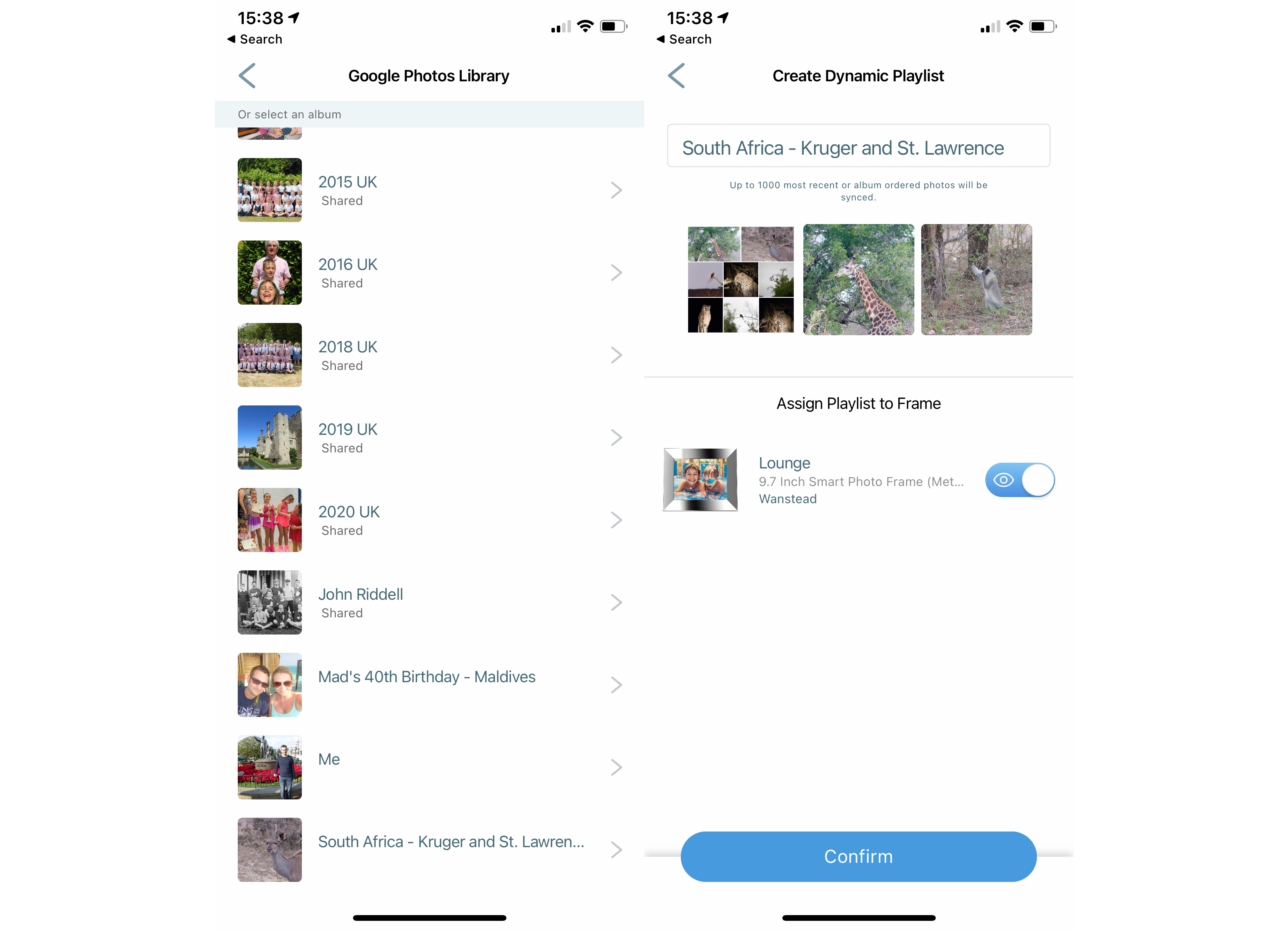 Google Photos can be used through the app, but if you use the web interface you can also pull in images from Facebook, Instagram, Dropbox, Flickr and (US only) Verizon Cloud.

You’re not limited to photos either, as you can add videos to the frame, complete with audio delivered via the basic speakers. The standard account only works with 15s clips (you can choose where to trim longer clips), and you need to upgrade to Nixplay Plus (£4.99 a month or £49.99 a year) to get longer video clips, plus 50GB of cloud storage and support for 10 frames (up from five on a free account).

As this is purely a frame for your photos, you can’t pull in other images or paintings from elsewhere, as you can with the rival Netgear Meural system.

Once you have your playlists set up you can use the app or remote to choose the one to play, or simply play them all. Just be careful when using the remote, as the default option seems to be playing all photos from all playlists, and you have to switch to a different screen to play a single playlist. 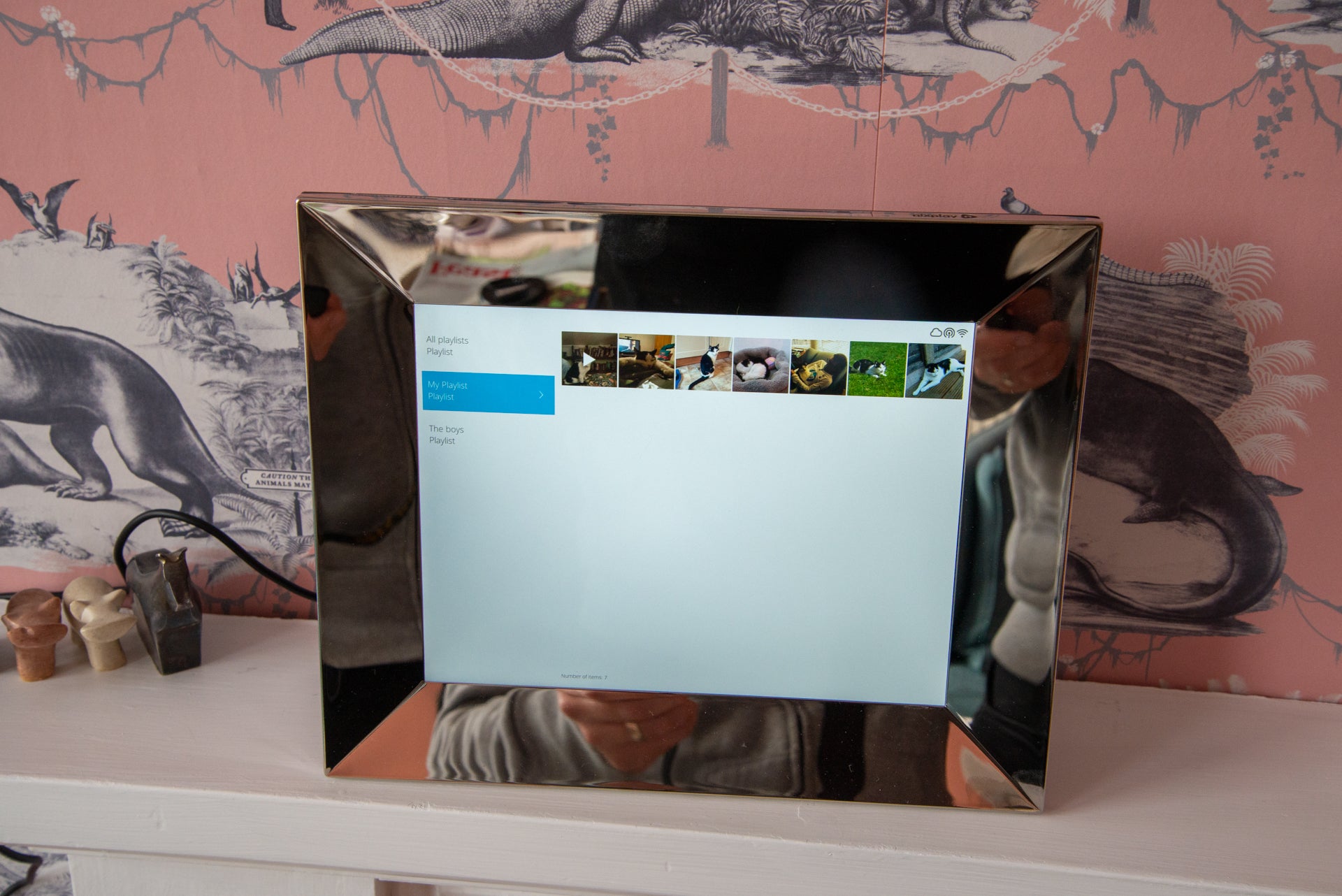 Once you’ve got a playlist on your Photo Frame, the images will change automatically. Using the app or remote, you can shuffle the images, and you can change the interval (between 5 seconds and 1 hour), as well as the transition used. Nixplay uses random transitions as default, shuffling between them, but some can be distracting as they catch your eye, so you may want to pick one style. It’s a shame that there’s not just an option to switch photos without using a transition effect at all, though.

Nixplay will adjust images to fit the orientation of the screen, but it’s a shame that you can’t limit what’s displayed, blocking landscape images from being shown in portrait mode, for example. This kind of option would give you the best overall image quality for those that want it.

To save power, you can turn the frame off manually when you’re not using it, or schedule when it’s active. You can also have the frame respond automatically. With the silver version, there’s an Activity Sensor, which listens out for noise, and shuts the frame down when it’s quiet. There’s a sensitivity setting, but I found that the Nixplay Smart Photo Frame 9.7 inch would sometimes sleep when I was just sat there quietly, so it’s worth adjusting sensitivity to get the best setting for your home. The Black version has a motion sensor, which is more accurate.

Nixplay has used a matte non-reflective screen in this photo frame, and it’s very impressive. Look at it in bright sunlight and you don’t get a reflection and can see exactly what’s going on. Stand too far to the side of the frame, and you lose a bit of colour accuracy and the silver frame tends to reflect a bit of light onto the screen. My advice is to place the frame, so that it’s hard to stand to the side of it.

The screen used on the Netgear Meural Canvas II, is also matte, but this one has been built specifically for showing artwork and photos. While the Nixplay Smart Photo Frame 9.7 inch looks more like you’re looking at photos on a screen, the Canvas’ screen looks like paper and you’d be hard-pressed to see that it’s digital. 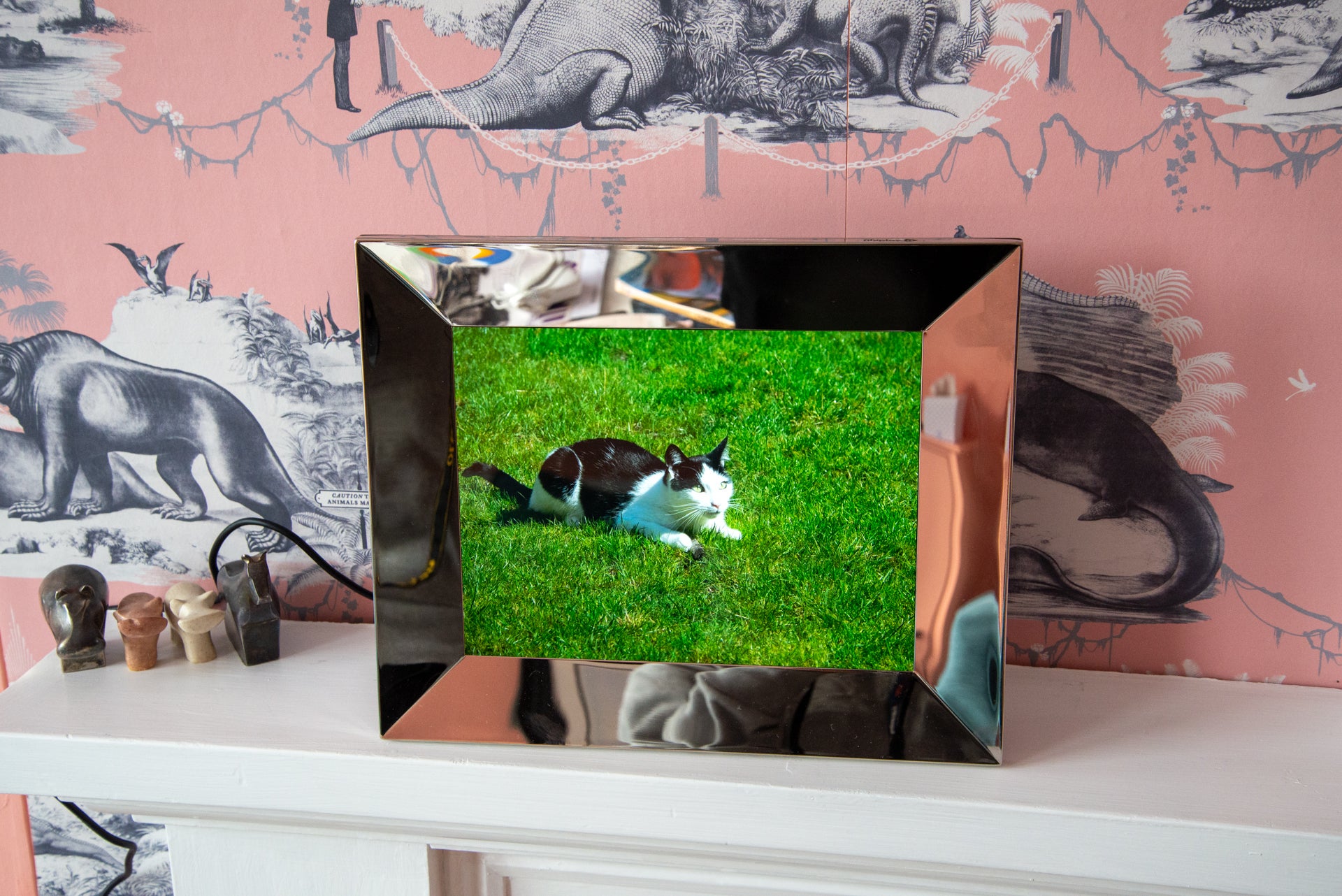 That said, the Nixplay Smart Photo Frame 9.7 inch has the advantage that it can play smooth video, as well as photos, with excellent results. This photo frame is a little quiet, and you can’t hear it over a TV, but audio is a nice touch to have for some videos. Of course, you can mute the screen if you don’t want any disturbances.

With the screen’s high resolution of 2048 x 1536, images are sharp and detailed. Colours are excellent, too, with sharp and vibrant images, although blacks can look a little washed out under some lights.

Overall, it’s a balance. With the Nixplay Smart Photo Frame 9.7 inch you get a sharp and detailed image that’s great for photos and videos, although it still always looks like you’re viewing a display; with the Meural Canvas, the image is more natural and looks like you’ve printed out a photo on high-quality paper, but you can’t do video, and the resolution is lower.

Should I buy the Nixplay Smart Photo Frame 9.7 inch?

What do you want a smart display for? If you like the idea of looking at thousands of pieces of famous artwork plus new designs by new artists, then the Meural Canvas II is better thanks to its store in the background. The Canvas also has a better display overall for photos and artwork, and you’d never guess that you were looking at a screen. The trade-off is a higher price.

If you want to just show off your own photos, and want video, then the Nixplay Smart Photo Frame 9.7 inch is for you. You can still tell that you’re looking at a screen, but the anti-glare coating is impressive and you can see this screen under full daylight, and photos and videos do look sharp and vibrant. Overall, this is a great way to release photos stored on your phone or computer so that you can actually get to see them.