What is the Nixon Mission?

Nixon’s idea is to create something a bit different – an Android Wear watch with features designed specifically for surf and ski fans. The most important extra hardware addition is GPS. Android Wear watches with this can be counted on one hand.

It’s not a great alternative to the Garmin Fenix 3 for those excited by the idea of a GPS-tracking watch, though, as it just doesn’t last that long between battery charges. 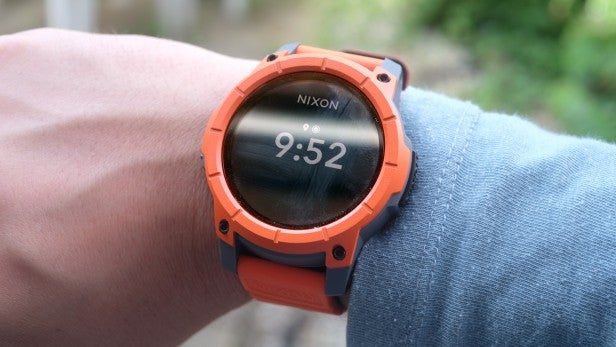 The Nixon Mission is a huge watch. It doesn’t just look chunky; it is chunky. It’s much closer in size to the Garmin Fenix 3 than almost any other Android Wear watch.

Some of this is in aid of the rugged look, but the Nixon Misson also has the best water resistance of any Android Wear watch. Where most ‘waterproof’ smartwatches advise not actually submerging them in water deliberately, this one is certified to 10 atmospheres of pressure underwater, or 100m in depth.

It needs proper water resistance to fulfil its premise, though, because the Nixon Mission is a watch meant primarily for surfers and skiers. Its native environment is around water, in liquid form or otherwise. 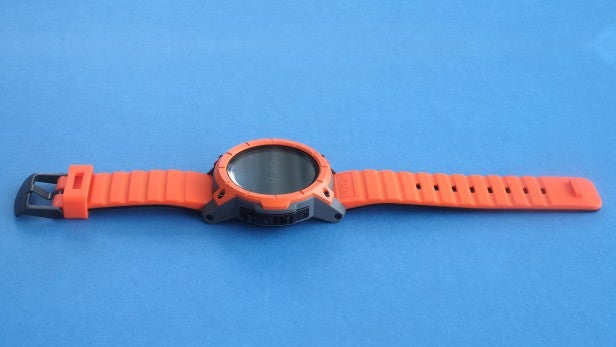 To break down the build further, the sides of the Mission are tough polycarbonate plastic, but the bezel and case back are 316L steel. The bezel is raised above the Gorilla Glass covering the display. 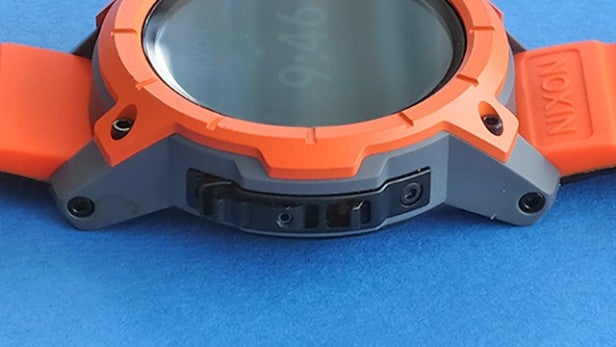 The toughness of the Nixon Mission is why it needs the odd-looking flap on its left side. This is a locking cover for the microphone, which by design has to make a hole in the hardy shell of the watch: not water resistance-friendly. It’s the one part you need to remember to flick over before getting anywhere near water.

Being so big comes with downsides. When working I’ve taken it off a lot of the time so it doesn’t get in the way, and you may earn a little ridicule at first for wearing the Nixon Mission unless you’re already known as “the token sporty one”.

However, it’s fairly comfortable given its bulk. That mixed polycarbonate and steel construction means it’s far lighter than one of those all-steel diving watches worn as status symbols, and the silicone strap hasn’t casued a rash or any skin discomfort. 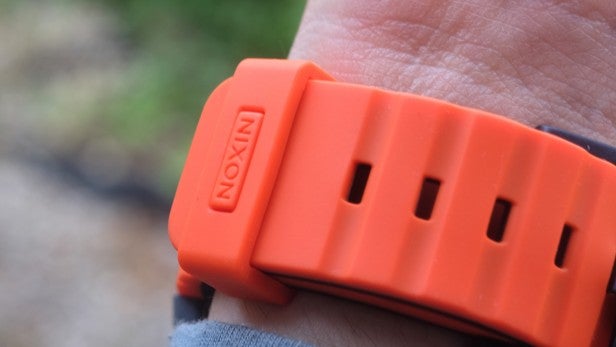 In other respects the Nixon Mission feels like a standard Android Wear watch, though. You connect it to your phone using Bluetooth and the Android Wear app, although like the more expensive Wear models it also has Wi-Fi to let it receive certain notifications when not connected.

Wondering how a “new name” in smartwatches has managed to come up with an accomplished design on its first attempt? Nixon is actually a fairly well-known watch maker that’s been around since the ’90s and is renowned for some of its more outlandish designs, such as the Rotolog and Dictator, although it also makes semi-smart tide-graph watches for surfers. 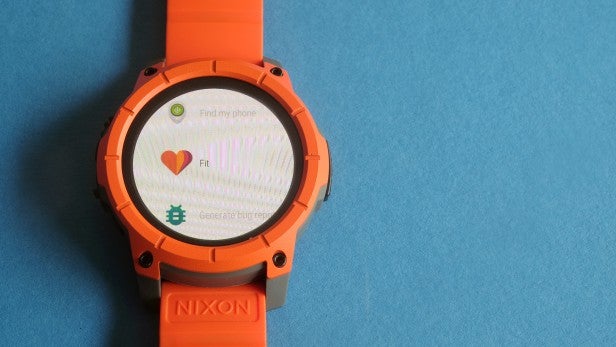 Nixon sells the Mission as an “action sports” smartwatch, quite distinct from a normal Wear watch or even a fitness-leaning one like the Motorola Moto 360 Sport. In hardware terms, this involves adding GPS.

Very few Android Wear watches have this, the Sony SWR50 and the Moto 360 Sport being the two so far. Add this to the excellent waterproofing and a couple of custom software bits and bobs, and the Nixon Mission roundly fulfils its promise.

The idea is that you’ll wear the Nixon Mission while skiing, snowboarding or surfing. Because there are so few Android Wear fitness apps designed to use ‘native’ GPS rather than piggy-backing your phone’s location data, Nixon has had to sort out its own. 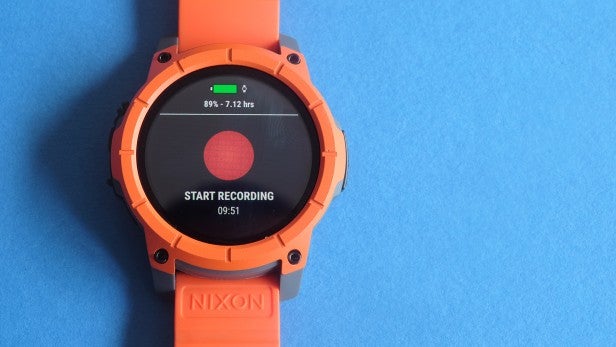 Nixon has partnered up with a few different companies to add a bespoke action sport watch face and a pair of apps designed for skiing and surfing.

Let’s start with the watch face. You set your location to a popular beach area or ski resort in the Nixon app and the watch will tell you the conditions right there on the face, along with the time. 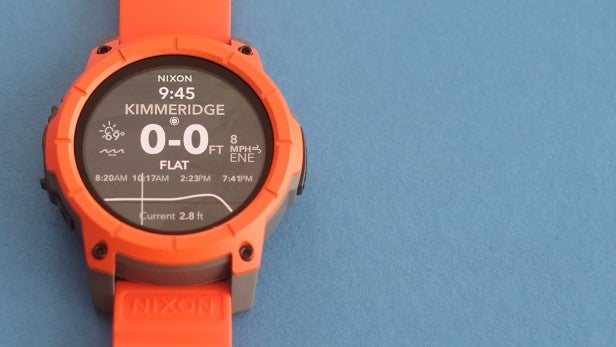 Other metrics the watch face displays include temperature and wind speed. The data is provided by Surfline and Snocountry.

The custom watch face is about the quickest way imaginable to see if it’s worth heading to the slopes or beach, short of camping out on them.

The main reason to buy the Nixon Mission, though, is the pair of apps that track your surfing and skiing, Trace Surf and Trace Snow. They’re quite simple, and similar to the kind of screen you might see while tracking a run with a Garmin watch. Only the fields differ between the surf/ski apps. 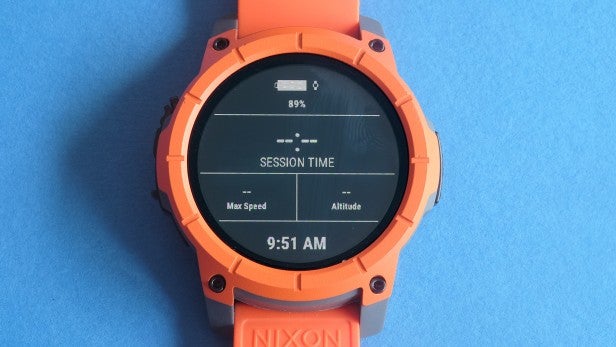 With the skiing app you see your top speed and altitude, while the surfing app displays your top speed and distance travelled. The idea seems to be that you can roughly check on your progress during any stops, and then check out exactly how fast you went at the end.

This data can then zapped over to the Trace Surf phone app. However, there’s not a great deal of depth to the tracking compared with what you get with, for example, a high-end runner’s watch.

You don’t get to see a map a mountain or beach with your route etched across it, or detailed speed and altitude graphs. There’s potential for this being added in the future, but don’t bank on it. 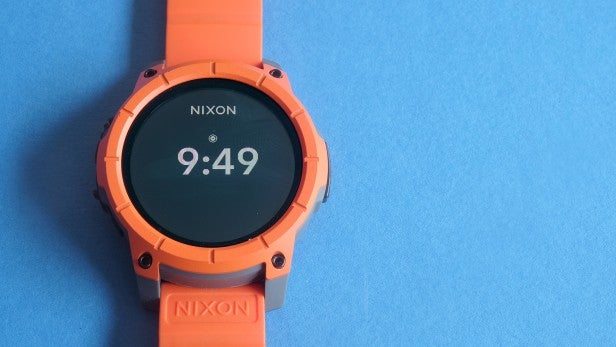 There’s some suggestion it may, though. The company Nixon worked with on these apps, Trace, makes exactly such a tracker. The Trace tracker is a GPS module you attach to your surfboard, snowboard or skiis to track your every move.

Even if the Mission ends up with this level of tracking, the Trace will still be superior because it tracks the movement of your board, not the waggling of your arms.

Right now the Nixon Mission is a fun tracker, perfect if you’re a gadget-loving hobbyist who skis or surfs for fun. Its abilities are bang on target for that sort of crowd. However, it doesn’t really give you the insight needed to improve technique.

There’s no heart rate monitor either, although all Android Wear wrist HRMs to date are almost useless during vigorous exercise. 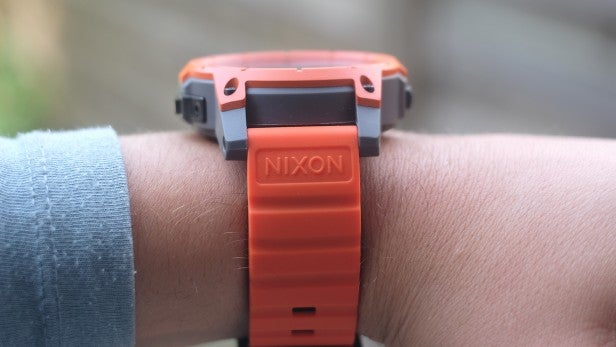 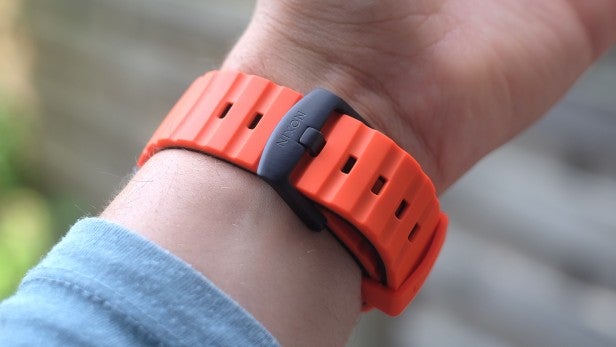 Despite the thoroughly sporty design, the Nixon Mission is largely an Android Wear watch with some fun extra abilities packed in. I have a feeling some of you are hoping for a little more than that.

Battery life is no better than the Android Wear average, too. Track an activity for 30 minutes with GPS activated and the Mission will last a day. It lasts for around four hours of GPS tracking total in my experience with the watch, and the battery is a 400mAh unit. Surprisingly enough, the second Apple Watch lasts a chunk longer using GPS.

Bizarre as it seems, the Apple Watch has the potential to become a better ski tracker in some ways if devs embrace the idea. It won’t take punishment anywhere near as well, though. 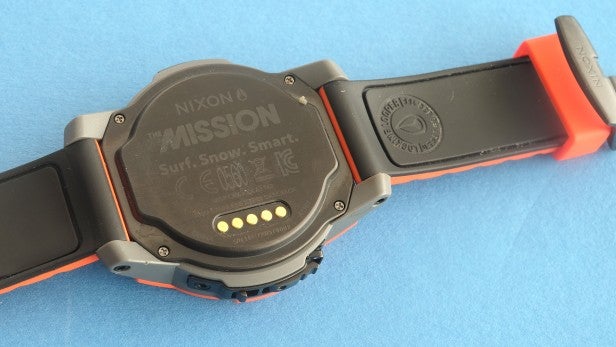 Used as a plain smartwatch, the Nixon Mission lasts around a day and a third. You’ll need to charge it every day. Consistent with the rugged style, the watch doesn’t use a show-off wireless charger, but a clip-in charging cable that connects with a series of metal contacts on the back. It’s similar to the one Garmin uses in its running watches.

Recharging takes a couple of hours too, so you’ll need to plan when to give it a juice-up rather than giving it a blast before you head out.

I’d hoped to see better performance here given the design, but inside the Nixon Mission is really quite conventional. It uses a Snapdragon 2100 chipset, a quad-core Cortex-A7 CPU that clearly doesn’t make great strides in real-life battery efficiency despite Qualcomm’s claims. 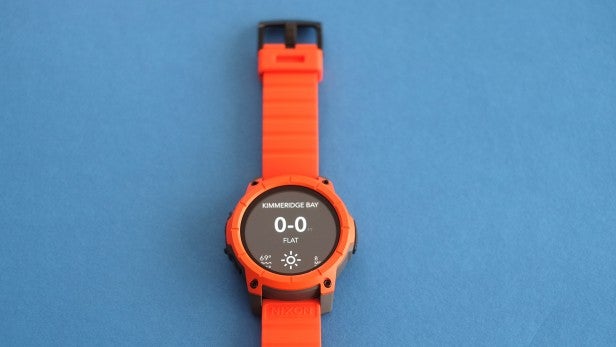 It’s no great surprise when you look at the CPU’s cores. 28nm Cortex-A7 brains are really quite dated compared with the 14nm and 16nm ones many phones use today. This figure indicates the size of a processor’s transistors: the smaller they are, the greater potential for efficiency savings.

That’s quite large and fairly sharp. However, it’s not necessarily the best choice for a watch you’re going to want to glance at on bright, sunny days.

Like any Android Wear watch with an always-on screen function, the display dims when not in use, then brightens up when used more actively. There’s an ambient light sensor that scales the brightness to suit the day, but it’s not instant. Like other smartwatches, you’ll be left waiting a few seconds. 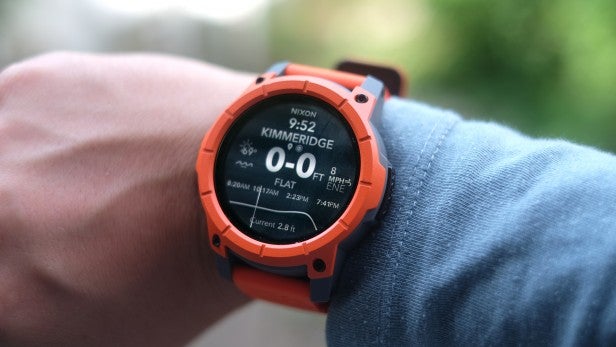 I find this grating in a sport watch, and tend to prefer display types that feed off ambient light rather than fighting it. You’ll find these kind of screens in Pebble smartwatches and most runner’s watches. They don’t look as snazzy, with dimmer, lower-fidelity (if any) colour, but the information you’re after will be right there on the screen, clear as day, when you need it.

It has a ‘unique’ angle, but this is really just a twist on a fairly normal Android Wear watch. Make sure you’re OK with that. 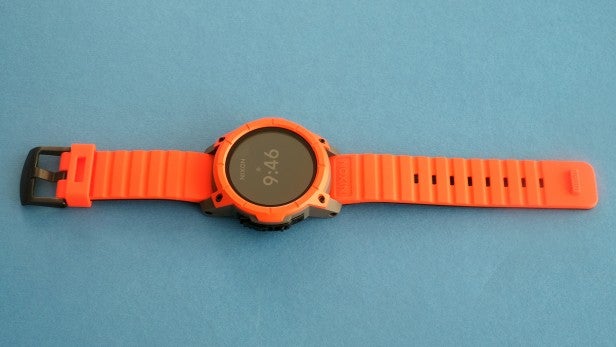 Android Wear’s core interface hasn’t really changed enough in the two-plus years since it was introduced. It’s an all-touchscreen system that can feel awkward, often lacking a clear view of what it’s trying to achieve.

Very few third-party apps make use of the Nixon Mission’s GPS too. While all the big running and cycling apps have Android Wear ‘second screen’ watch apps, none of the biggest names are designed for use with built-in GPS. Runkeeper, for example, only tracks if your phone is connected.

There is one that does work, though. Ghostracer can leech off the Mission’s own GPS. It’s made by an indie dev, but works well and can sync with Strava to make your data more shareable.

To re-iterate: make sure you’re aware of the limits here, and the research you’ll have to do to squeeze the most out of an Android Wear device. 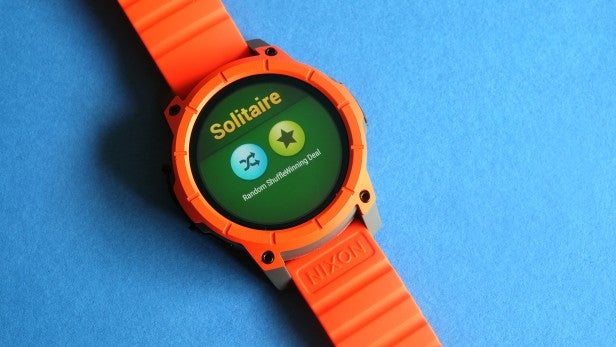 Should I buy the Nixon Mission?

The Nixon Mission is a great piece of watch hardware constrained by the usual Android Wear problems, and by the fact that Nixon doesn’t have the cash equivalent of a small country’s GDP to develop its software.

Nixon has made some sensible deals with third parties to make the most of existing work, but the depth of what you end up with doesn’t compare to what’s on offer from long-standing running watch makers like Garmin and Polar.

You may argue that’s not fair when this is something new, and a little different. But we shouldn’t have to compromise too much when we’re paying £339 for a smartwatch. There’s no like-for-like rival for the Mission, but if you’re very serious about surfing or snowboarding, you may be better off with a Trace tracker.

A tough-as-nails smartwatch with many of the same software and hardware problems as other Wear watches.