New Super Mario Bros U might be the Wii U’s flagship title, but Nintendo Land is its showcase – its Wii Sports – a fact made clear by its inclusion in the Wii U Premium Pack. It’s a game that’s been designed as much to demonstrate as to be played, and it’s also that most detestable of things: a mini-games compilation. The good news is that, despite any misgivings this might cause, it’s actually a lot of fun to play. 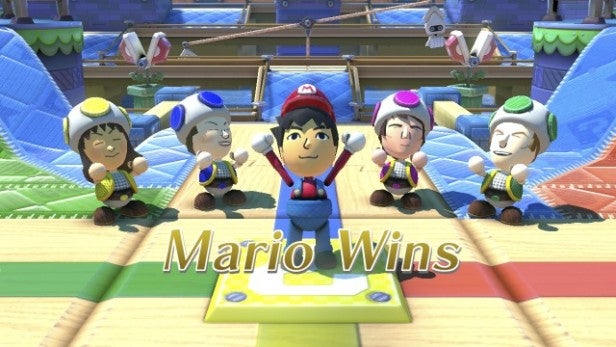 It’s themed around a slightly surreal Nintendo Theme Park, based around a circular plaza, and with gates leading off to the twelve different attractions. There’s a kind-of central reward structure in place, with you earning coins in the games which can be converted – through an oddball coin-drop game – into adornments for the park, while a train soon appears enabling multi-game tours of the different mini-games. This really isn’t much of a focus. With Nintendo Land, it’s all about the individual experiences, and how they’re played. Nintendo divides them into three categories: single-player games, team games and competitive games, but there’s actually a degree of crossover between the last two.

Solo Games
The Solo games are all designed to showcase some aspect of the Wii U Pad controller, and while they look very nice and generally play very well, there’s often a little niggle in the back of the mind that you could be playing a decent iPad game. Takamaru’s Ninja Castle is probably the best; a touchscreen-enhanced variant on the classic Operation Wolf/Virtua Cop laser-gun game, where you point the Wii U Pad at the screen and flick ninja stars from its surface at the oncoming ninjas. It’s easy-to-pick up, fast-paced and fun, with some scope for show-off skill moves and some really nice, stylised Oriental visuals. 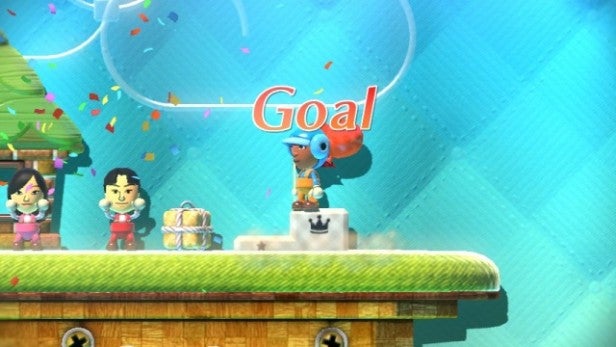 Balloon Trip Breeze is another keeper, dangling your Mii from a bunch of balloons, and expecting you to guide him or her through a series of obstacles, collecting balloons and delivering mail while making sure you float safely above the sea. You swipe the touchscreen to blow your balloonist in the right direction, and it all works very well, with tight controls and a steady increase in the level of challenge.

In the first, you have to get a mine kart through a twisting Donkey Kong track layout, using the tilt controls to tilt the track to the left or right, using the shoulder buttons to flip switches and rotating the left and right sticks to shift certain portions of track.

In the last, you’re playing a simplified F-Zero from a top-down viewpoint, completing short checkpoint races while avoiding various impediments and hitting boosts. Of the two, Crash Course is the most successful, with a little of that Trials Evolution addictive puzzle vibe. Twister Race starts off very slow and grows a little repetitive; it’s not easy enough to make a great family game, but not interesting enough to engage more serious gamers. 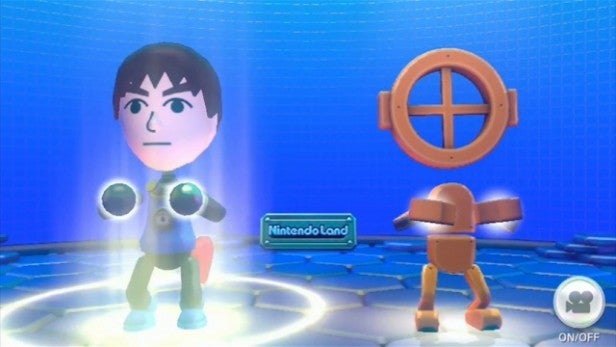 The last two are a little weird. Yoshi’s Fruit Cart is effectively a puzzle game, where you have to draw a route on the Wii U GamePad screen so that a little Yoshi car can gobble various fruit items on the way to an exit. The challenge lies in that you have to draw on the Wii U Pad, but the fruits and and obstacles are only visible on the TV. It’s a curio, but a surprisingly entertaining one, with a real ‘just one more go’ factor.

Octopus Dance, meanwhile, is a Simon Says style dance game, where you use the analogue sticks to replicate the moves being demonstrated by your robotic dance instructor. The clever bits come in the form of some nice, shake-activated special moves, and in the fact that your instructor occasionally pushes you so that you’re facing the front of the screen. As the TV shows the opposite viewpoint, this means you have to shift from looking at the Wii U Pad to looking at the TV, or get hopelessly confused. It’s cooler and more fun than it actually sounds, and should go down a storm with younger players.

Team Games
The team games give Nintendo Land its first chance to put Nintendo’s asymmetric multiplayer gaming concepts to the test, and the results are very entertaining. Some might be disappointed to find that Legend of Zelda: Battle Quest is an on-rails shooter/slicer, but the actual gameplay, with up to four players fighting with sword and shield while a Wii U Pad player provides support with bow and arrow, is pretty good.

The action takes you through a series of classic Zelda scenarios, and the Wii U Pad controls, which combine motion-controlled aiming with more conventional thumbstick view controls, are surprisingly intuitive and accurate. High-score charts and collectibles mean there’s a little replay value, and the difficulty level gets surprisingly high on later levels, keeping everyone on their toes. Some might even find the going a little too tough. 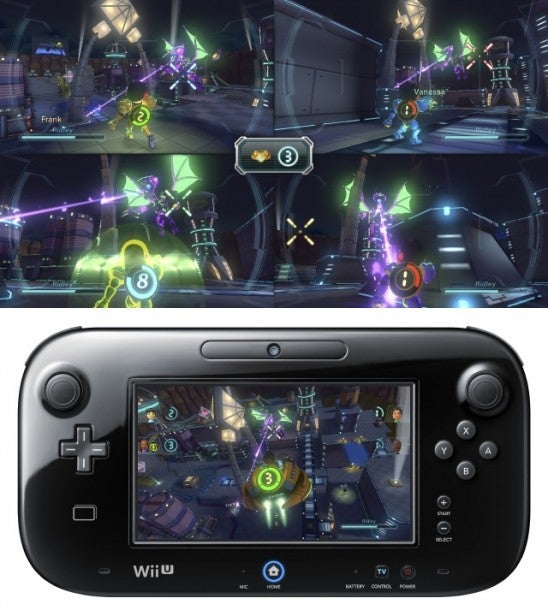 Metroid Blast is more challenging still: a five-player, first-person shooter than can be tackled in either competitive or cooperative modes. In either case, up to four players fight on foot, using a Wii remote to aim and shoot and the nunchuck controller to move, while a fifth on the Wii U Pad flies around in a nippy spacecraft, firing cannons and missiles at their foes. If you’ve played a few Wii shooters you won’t have any problems with the foot controls, but newbies might struggle for a while. The ship, is even more demanding, requiring you to move and strafe with the left stick while changing altitude with the right stick and rotating the view by physically moving the Wii U Pad. It becomes natural with time, but it makes Metroid Blast one of the harder games to get a handle on. And while the co-op mode, which sees players working together to tackle waves of monsters, is fun, it’s a disappointment to see such basic-looking enemies – we’d like a glimpse of what next-gen Metroid enemies might look like.

The star of the Team Games, however, is undoubtedly Pikmin Adventure. Beneath its cute exterior it’s actually a streamlined Diablo clone, with Captain Olimar and up to four giant Pikmin chums tackling outdoor dungeons, clearing them of insect enemies and bosses. There’s even a simple levelling mechanic, with both the Pikmin and Olimar consuming nectar to build experience levels, giving Olimar more tiny Pikmin to hurl at foes, and the giant Pikmin more resilience and damage. Each level adds new twists, like special jump pads, time limits, bombs or tricky adversaries, and with a good number of levels to work through it’s a surprisingly meaty effort that you’ll be happy to come back to again and again. 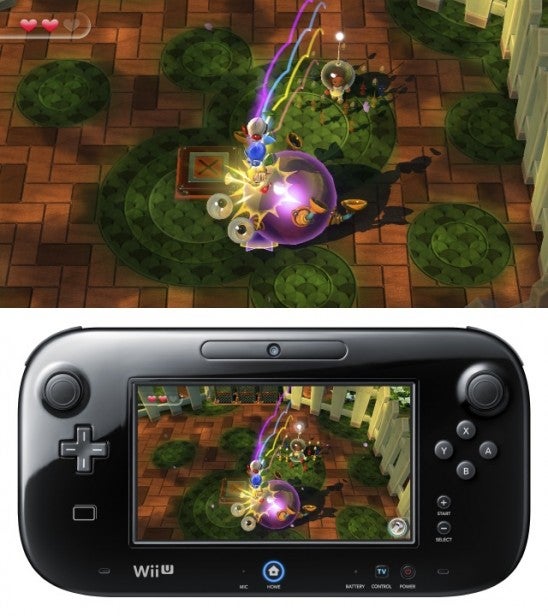 Competitive Games
It’s with the competitive attractions that things get really clever, with games that focus on the way the Wii U Pad allows one player to see things that aren’t visible to those playing with the Wii remotes. In Animal Crossing: Sweet Day, the Wii Remote players gather and eat sweets while being chased by guards controlled on the Wii U Pad (though there is another variation for two players where it’s all about collecting and depositing the sugary bounty).

In Luigi’s Ghost Mansion, one player plays a ghost, creeping up on up to four ghost hunters who can wear down the ghost’s energy levels with their torches. The ghost can see the hunters, but the hunters can’t see the ghost unless the unlucky spirit is in their torchlight. Otherwise, the only clue is a rumble that increases as the ghost gets nearer. This puts the emphasis on teamwork. Coordinate, and you can deal with the ghost. Fail to coordinate, and the ghost can pick you off one by one. Spooking family members has never been so much fun. 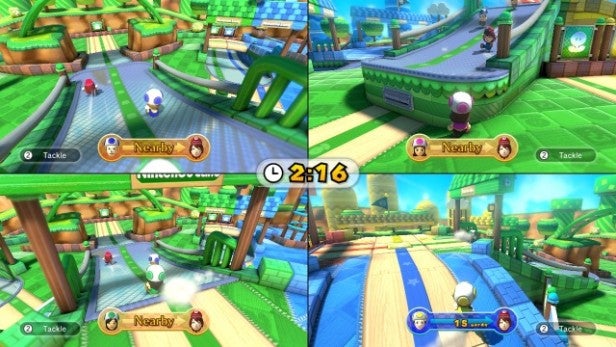 The best of the competitive games is the simple, stupid and utterly lovable Mario Chase. It’s basically hide-and-seek, with four players on remotes chasing one dressed up as Mario, who races around maze-like levels trying to avoid them. The Mario player can see the map and all the player’s positions on the Wii U Pad’s screen, but the players can only see him when he’s close, again pushing teamwork and communication as the key to victory. Different ground types and obstacles make the game more challenging beyond the first map, and it’s a perfect example of what Nintendo does best: a game so simple that your eighty-year-old gran could pick it up and play it, and so addictive that you won’t get her off it. We love it to bits.

Graphics and Sound
While Nintendo Land is a stirling showcase of the Wii U Pad and its varying capabilities, it’s not the place to come if you want a powerhouse demonstration of the Wii U’s graphical prowess. Pikmin Adventure aside, the art style is very much in the flat, stylised mould of Wii Sports, Wii Fit and Wii Play, though with richer textures and more exotic effects and lighting. The soundtrack is typically Nintendo, with jolly music and a range of classic themes. If only it didn’t also contain the mutterings of your annoying compere, Monita. 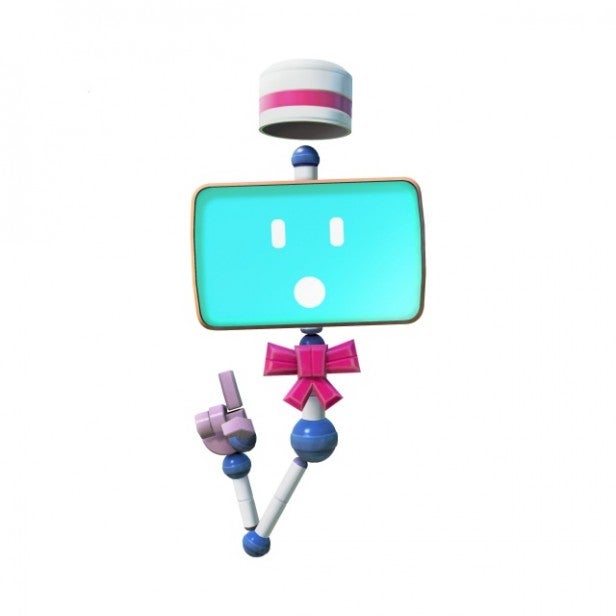 There’s Something about Monita
If there’s one thing we don’t like about Nintendo Land, it’s Monita. A robotic guide who introduces the attractions and explains the workings of each game, she’s a dull, wordy personality with an intensely irritating high-pitched robotic voice, and this is a game that explains everything so much, in such simple terms, that you’ll have to endure an awful lot of her. You’re tempted to skip, but then you know that if you do so you’ll miss some vital instruction, or have to explain the whole game yourself. Prepare to see younger members of your household – the ones who will love Nintendo Land most – finding their patience getting stretched very thinly indeed.

Verdict
Monita aside, Nintendo Land is a delight. Mini-game compilations usually struggle with a lack of meat and a dubious strike rate, but here the attractions are almost all enjoyable, and a few are downright compulsive. Most of all, it’s a game that demonstrates how Wii U can get groups of people playing together in a whole new way, and having a good time while they do it. It makes you smile. It makes you laugh. It makes you cackle maniacally as your nearest and dearest succumb to ghost attacks or get floored by a flying tackle. It makes you feel like a team of heroes. At its worst, it’s just another bunch of mini-games, but at its best, it’s absolutely magic.