Amiibo is Nintendo’s take on the whole toys to life games craze, as started by Activision with its huge-selling Skylanders, then copied by Disney with its equally popular Infinity range. Being Nintendo, however, it works a little differently. Skylanders are tied into a specific franchise, while Disney sees Infinity as a platform for creative gaming where the individual toy packs and playsets slot into place. Amiibo, however, is a sort of complement to Nintendo’s game systems and franchises, where you can buy one toy and have it work across a range of different games, both on the Wii U and on the new Nintendo 3DS (note, the one that launches here after Christmas).

The figures themselves are nicely crafted chunks of plastic roughly 75mm to 90mm high and reasonably solid. In terms of finesse and detail they’re a good deal better than the early Skylanders and more than a match for the more recent Skylanders Trap Team and Disney Infinity 2.0 figures. Some flash storage (Nintendo doesn’t say how much) is embedded in the base along with an NFC chip, which communicates with the NFC reader/writer built into the Wii U Pad or the new 3DS.

So what do they do? Well, it depends on the game. In Mario Kart 8, for example, putting Link or Mario on the pad unlocks a special Link or Mario costume for your Mii driver. In Hyrule Warriors, meanwhile, each Amiibo figure provides one perk or bonus item per day. 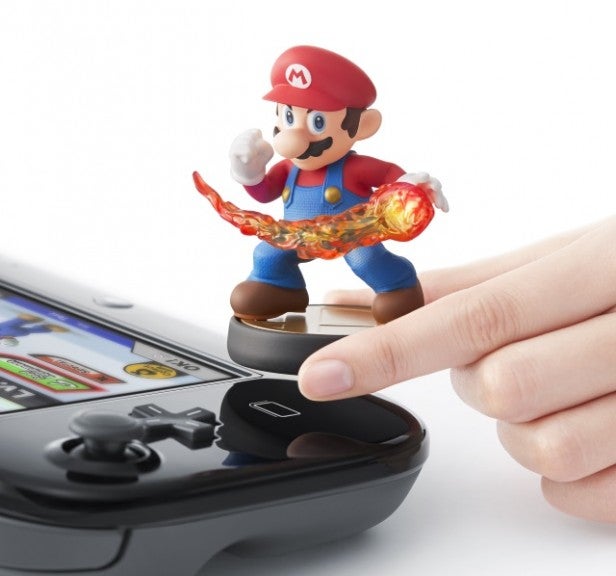 That’s all very nice, but not the sort of thing that gets you collecting plastic figures. To really see the potential of Amiibo, you need to try it with Super Smash Bros for Wii U. Here, going to the Amiibo mode and tapping an Amiibo on the pad unlocks a specific version of the character portrayed within the game. You can customise this version’s costume and give them a name, customise their special moves then feed the ‘effects’ to boost their offensive and defensive stats. These effects always have a negative side, so you need to balance them carefully, but it’s possible to tweak and customise your Amiibo fighter to give them a different style of play.

Surprisingly, you don’t actually play them yourself. Instead, they take the place of CPU-controlled fighters in the game, learning from you and from the other human and CPU players and steadily levelling up. The more you battle them, the better they get. Our own Mario-clone, Mortadella, actually became a bit too good for our liking. Luckily, you can also pit them against each other, seeing which Amiibo is the toughest. 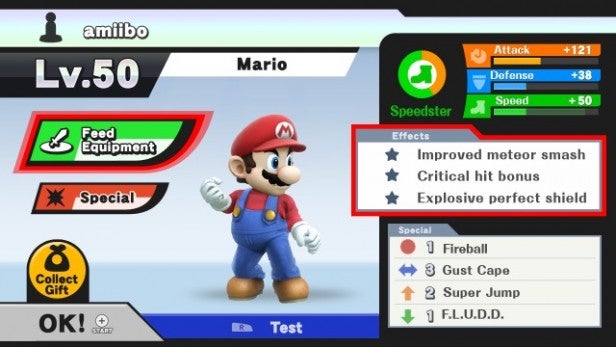 This adds a new dimension to the game; you can nurture your Amiibo, take them to a friend’s house, then pit them against your mate or their Amiibos. It transforms you from a fighter into a kind of coach, managing your stable of Amiibos, then taking them in for the win.

It’s fun, and we’ll be interested to see how other Amiibo titles work out, with Captain Toad: Treasure Tracker, Yoshi’s Epic Yarn and the next Kirby game all due to use the figures in the next few months.

The only downside is that only one lot of save data can be applied to one Amiibo at a time, This isn’t a problem for games which only read the figure to unlock something, as in Mario Kart 8 and Hyrule Warriors. It is, however, for games which save data to the figure. If you’ve stored Smash Bros. data on an Amiibo, for example, you’ll need to delete it before you can use that figure with another game that saves. We can see this causing confusion and even tantrums amongst younger games (and some old ones, too).

Is it worth it? Well, the figures come in at a pretty whacking £10 each and only really make sense as an accessory for Super Smash Bros. in the right here and now. Basically, then, you need to think how much you like the idea of training fighters and sending them to battle, and work out if it’s worth a tenner to you. There’s certainly potential here, but we need to see it used in more games. It would also be an easier recommendation were the single save restriction not in place.

Verdict
There’s a lot to like about Amiibo and the way that Nintendo hasn’t greedily made it an integral part of any one game, but made it a way to unlock new modes and features within a range of titles. The figures are hardly essential in Hyrule Warriors or Mario Kart, but they do add an extra dimension to Super Smash Bros. All the same, they are expensive and the one save per figure restriction could become frustrating. We like Amiibo, but Nintendo’s toys to life offering stil has a lot to prove.