The Ninja Ultimate Chopper, Blender & Mini Food Processor NN100UK is a machine designed to handle everyday food prep tasks alongside more familiar fruit and veg-blitzing, all in a conveniently-sized package that can happily be accommodated in even a tiny kitchen.

Despite its size, it still manages to fit in a powerful motor, 10 Auto iQ one-touch programmes and a boost button for some added clout. The latter moves the blades at up to 20,000rpm in the cups and 4000rpm in the Nutri bowl. 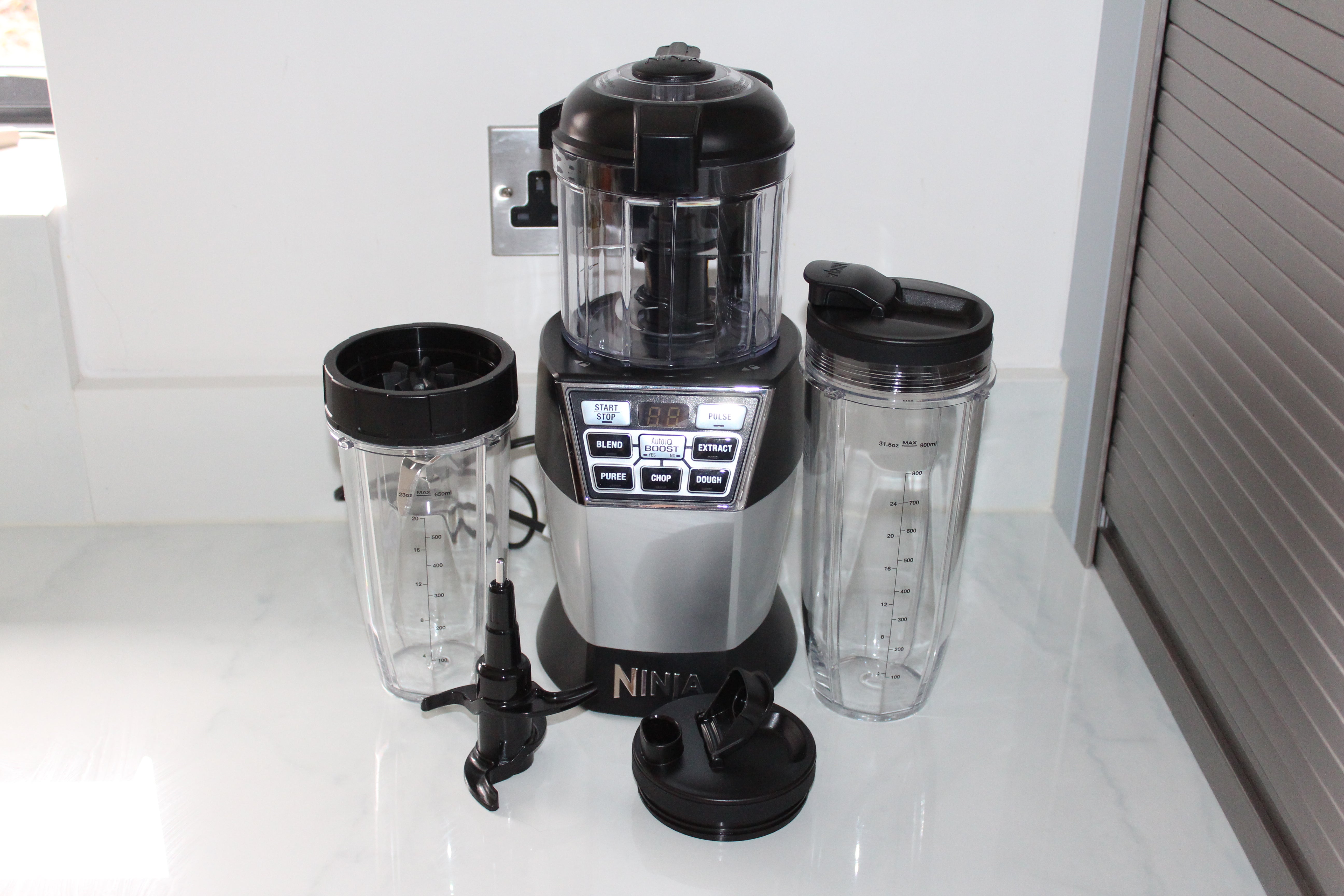 The NN100UK has making smoothies down to a fine art. There are two large BPA-free Tritan cups from which longer smoothies can be sipped all day. Each has a lid with a spout that flips 180 degrees, so that it won’t get in the way of your nose as you enjoy those last remaining drops.

There are a choice of programmes for smoothies – Blend or Extract with the option of boost – to tackle fibrous food as efficiently as nuts, seeds and ice. The Pro Extractor blades simply screw into the cup, which is inverted before being locked into the base; then you simply hit your button of choice. The Nutri bowl works much like a sized-down food processor, with a dough blade for mixing and kneading, a stacked four-knived Precision Prep blade assembly for chopping and puréeing, and a lid with a drizzle hole, so you can add liquids or oils as the machine runs – which is great for making mayonnaise and dips.

Here you get Dough, Purée and Chop programmes, plus the option of boost. There’s also a Pulse button and Start/Stop for manual control and strong sucker feet to keep it planted on the worktop.

Ninja Ultimate Chopper NN100UK – What’s it like to use?

Not sure what you can make with the Ultimate? Its recipe book has almost everything you could think of, from soups and smoothies to marinades, ice pops, salads, burgers, desserts, breads and cookies. Some of these are Americanised, calling for ingredients such as a stick of butter rather than an amount in grams. There’s also a handy quick-assembly guide for anyone feeling overwhelmed with the amount of kit.

I started by making a pineapple and spinach smoothie in the large cup, using the Extract programme plus boost to tackle chunks of the fibrous fruit. This involved a sequence of blitzing and pauses that was very noisy, but it was reassuring to see the base stay steady on the worktop. The flip-top lid provided easy access to drink, and the resulting smoothie was well-blended with a consistent texture without any lumps. Next, I filled the smaller cup with ingredients for the Morning Berry recipe, which included honey and flaxseed along with frozen berries. I used the Blend programme plus boost, which followed a similar pattern to Extract.

Both smoothie programmes took one minute and counted down as they blended. The berry recipe wasn’t quite as smooth as expected and some traces of flaxseed remained, while a lump of honey stuck to the side of the cup remained unmixed. Fortunately, the manual mode helped to increase the blending time for a smoother result. Switching to the Nutri bowl and the stacked blade, I added two carrots. As the bowl was quite small, these needed to be chopped into chunks so that I could secure the lid. I opted for the Chop programme without a boost. This consisted of two quick pulses, which mostly did the job although some larger pieces of carrot remained. The bowl doesn’t have a handle, which made scraping out the contents a little tricky with nothing to hold on to. 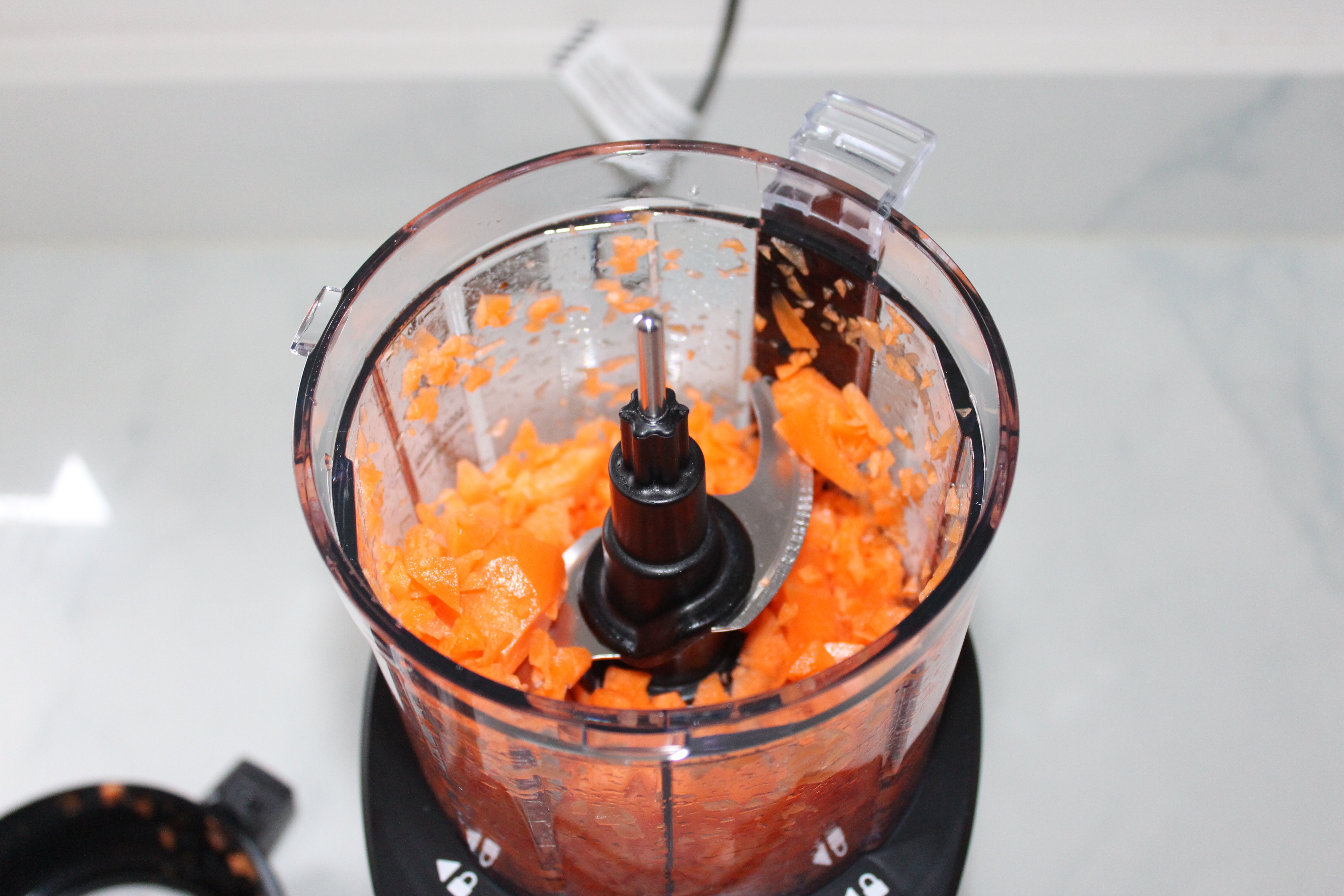 Finally, I used the dough blade to make breadsticks. The bowl isn’t large enough to accommodate enough flour for even a small loaf, but it can make other bread-based recipes. This version used 125g of flour and 100ml water, which almost half-filled the bowl.

Using the Dough programme, the ingredients were combined in around 10 seconds although the machine didn’t knead the mixture. The breadsticks proved and rose well following a small amount of manual kneading.

Clean-up was simple since all the parts of the Ninja Ultimate Chopper are dishwasher-safe. However, the stacked blade was awkward and hazardous to clean by hand; it’s design would be better with more of a spindle to hold on to while washing.

While it’s never going to be able to replace a full-sized food processor, where the NN100UK excels is in ticking off small tasks for which you’d be reluctant to haul an appliance out of the cupboard – chopping a couple of vegetables or whipping up a quick dip, for example.

However, it remains more a smoothie maker with extra functionality, making it good for solo households and couples rather than big families and keen cooks who are likely to struggle with its processing size. Note that it’s especially noisy, and the handleless bowl hampers its use – but you can’t beat it for sheer versatility.

A sure-fire solution for space-poor kitchens and smoothie lovers alike.