A brilliant way to blend smoothies with more substance.

What is the Ninja Smart Screen Food Processor with FreshVac Technology CT670UKV?

FreshVac technology might sound like something you’d use to clean a carpet, but working in combination with Ninja’s 3-in-1 Smart Screen, it’s an interesting new way to make drinks.

While traditional blending incorporates oxygen, leading to discolouration and separation of fruit and vegetable drinks, the Smart Screen comes with a FreshVac Pump. This draws out the oxygen, vacuum-sealing the contents before blending begins, so drinks remain brighter, with less foam and separation. As such, you can make a smoothie in its cups or pitcher, leave, and return to something that still resembles a healthy drink.

The Ninja Smart Screen is a multi-functional whizz, working as a food processor too, so you can create sauces, dips, desserts and even fishcakes, burgers, dough and cake batter in one machine. In terms of basic design, the Smart Screen isn’t dissimilar to previous Ninja blenders, such as the Ninja Multi-Serve Touchscreen Blender CT610UK. However, extra functions equal additional kit, so you may need to clear some cupboard space.

Vacuum-blending works by attaching the pump to the top of a cup or pitcher to remove as much air as possible before starting the machine. From there on, everything is straightforward, with LED touchscreen presets for Smoothie, Ice cream, Purée, Extract, Chop and Frozen drink (depending on whether you’re processing or blending) – or High, Low and Pulse buttons. A powerful 1100W motor means the Ninja can take on tough ingredients such as fibrous fruit and veg, nuts, seeds and ice.

Ninja Smart Screen Food Processor with FreshVac Technology CT670UKV – What’s it like to use?

A key part of getting the most of out of the machine is its recipe booklet, which is packed with ideas for drinks and dishes. There’s also a quick start guide. What’s especially clever is that the touchscreen shows programme options only once a container has been attached, which reduces any uncertainty. The automatic programmes count down time, while the continuous manual modes count up.

I started by blending a smoothie with the jug, using fibrous pineapple, spinach and ice. Once I’d attached the lid, I placed the vacuum pump on it and pressed the power button. As it worked I could see bubbles of air being sucked out of the water. The pump stopped automatically once the machine had finished, which took about a minute. While the pump doesn’t lock into the lid, once a vacuum has been formed, it’s stuck, so there’s also a release button. There was no option for Extract, so I chose the Smoothie programme. This was 70 seconds of pulsed blending followed by constant with two pauses. It was very loud during operation. 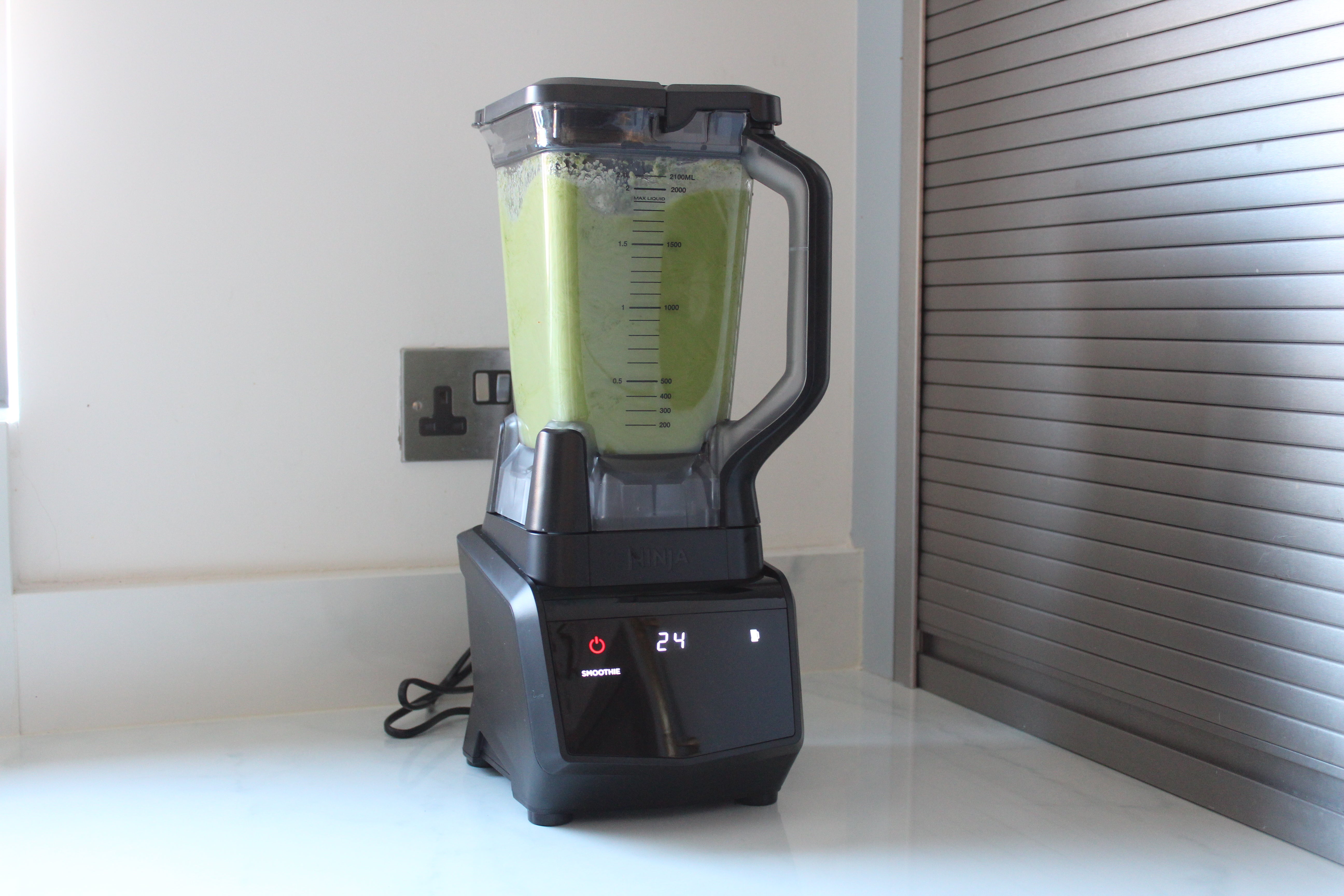 The finished smoothie looked foamy. There’s a tab in the lid to release the vacuum, which hissed when lifted. The smoothie started to settle and took on a more vivid colour. No traces of pineapple remained but there were a few specks of leaves and residue. Next, I made a Berry almond smoothie in a cup with the screw-in blades. This took around 20 seconds to seal with the vacuum pump before blending using Extract for 70 seconds. Thereafter, I decided to store the smoothie overnight, to see if it would retain its bright purple colour and consistency. As the blades can’t be left in the cup, it was necessary to release the vacuum before storing with the lid screwed on. The next morning, the smoothie had separated. However, once shaken, it returned to its former colour and tasted freshly made. The lid was also easy to drink from as it swivelled back completely. 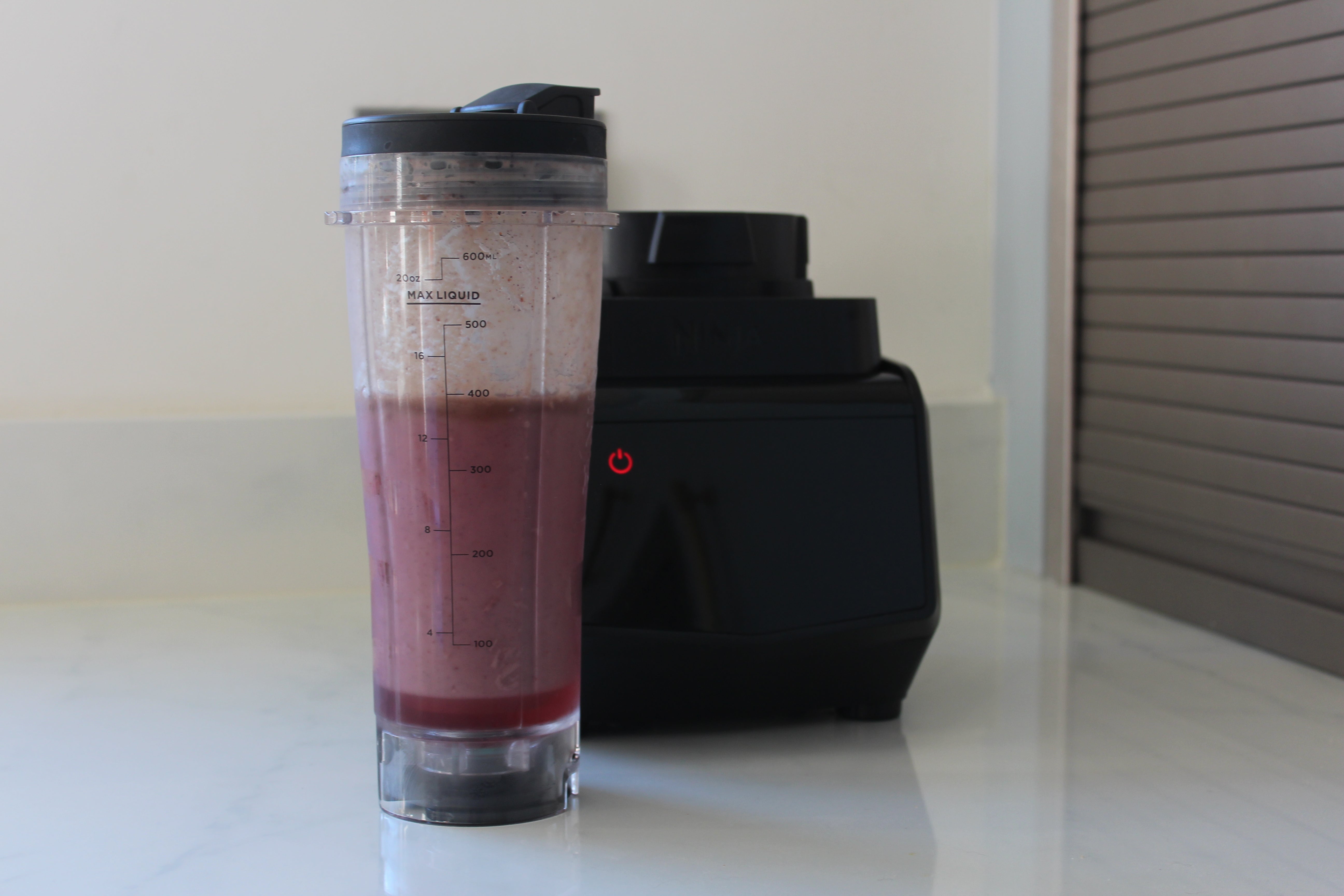 Moving on to the processor, I used it to make bread dough with the hook. There weren’t any recipes included using this attachment, or much guidance. 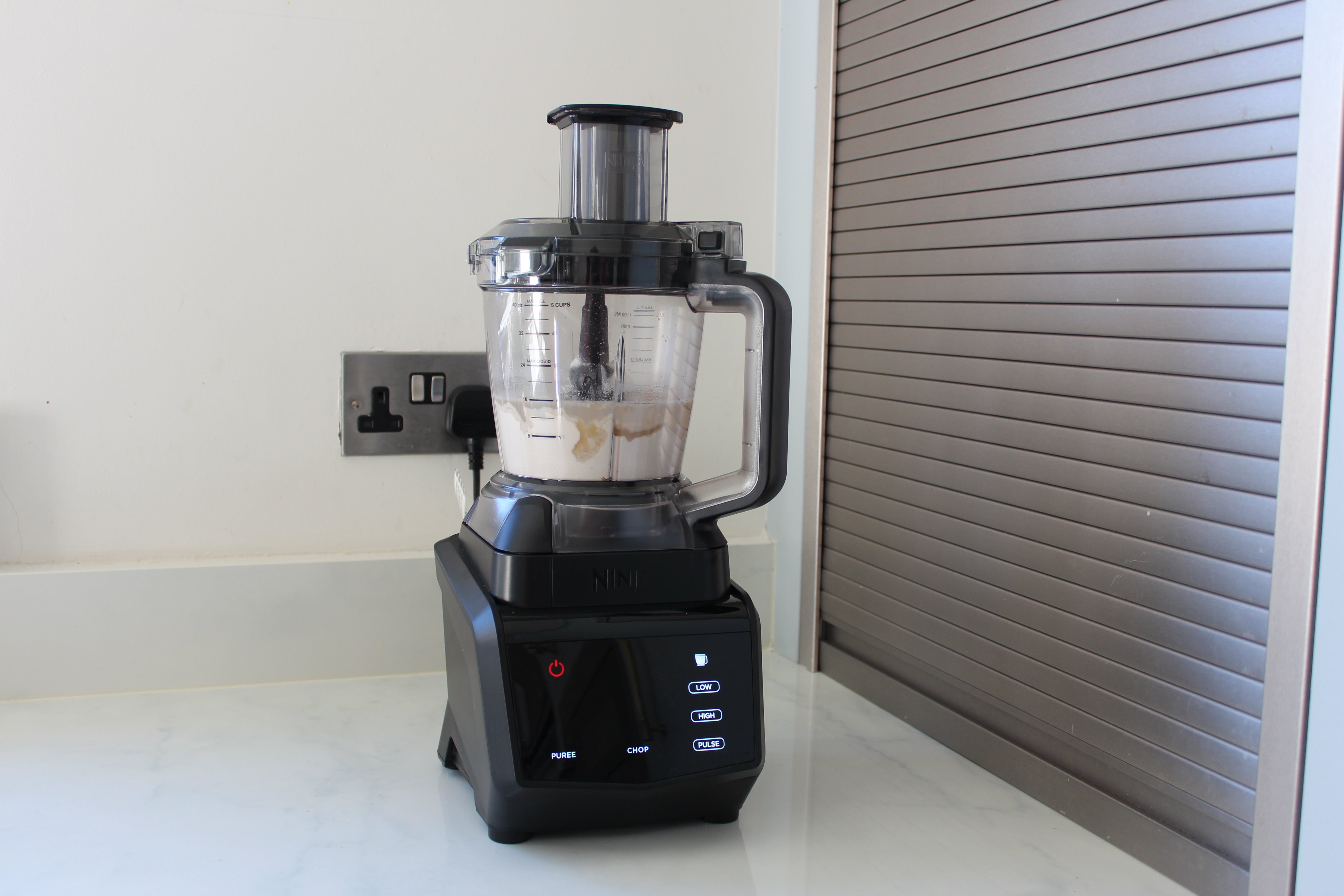 I used the low speed to combine and knead the ingredients, which created a soft, springy dough. It was tricky to remove from around the tool, plus the limited size of the bowl means that this method would be better for small amounts. Manual kneading was required; however, it baked well.

Next, I used the disc to slice carrots. 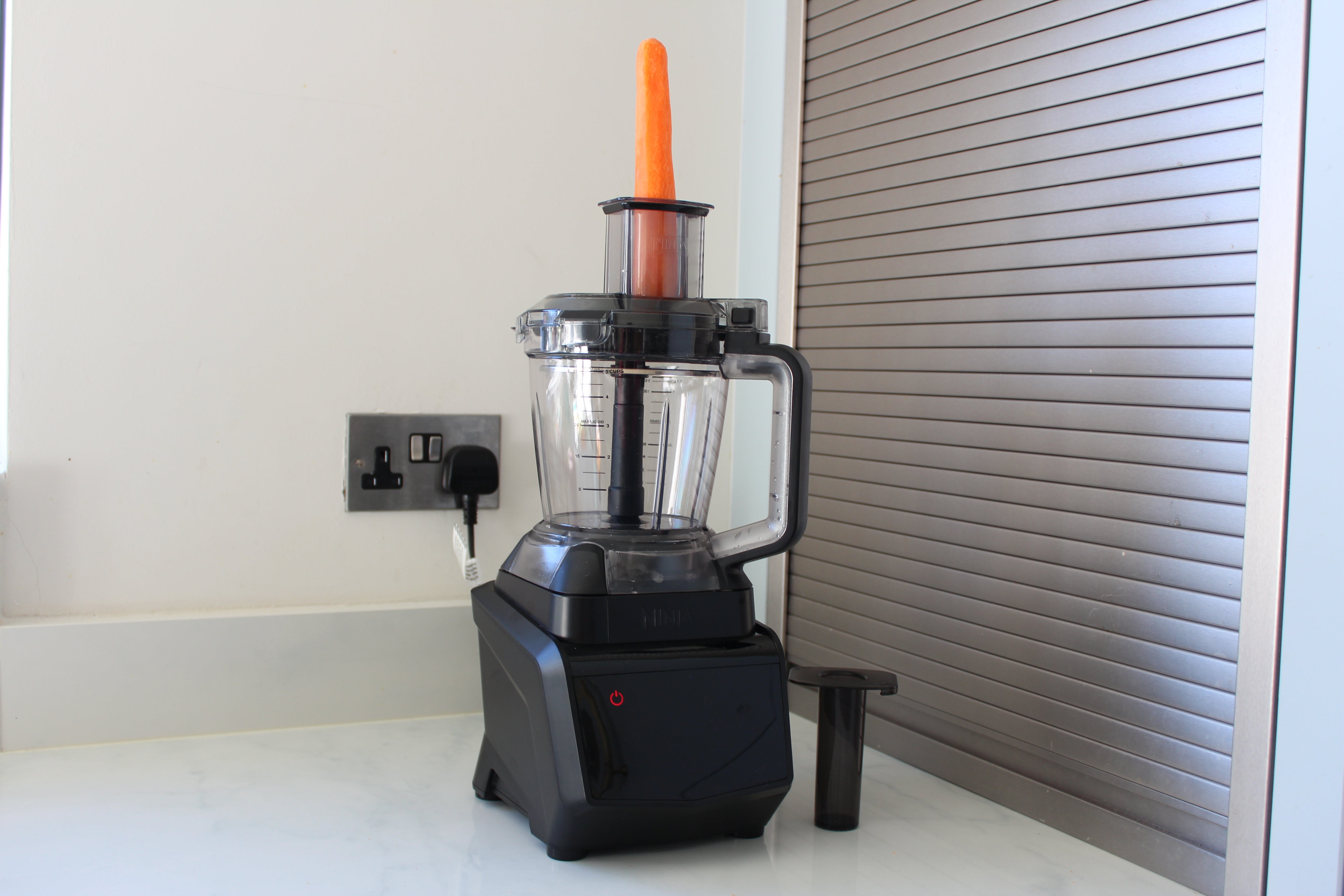 I ran it on low but found that the results varied in thickness. Changing the disc for the chopping blade, I used the Chop programme to make chicken burgers. 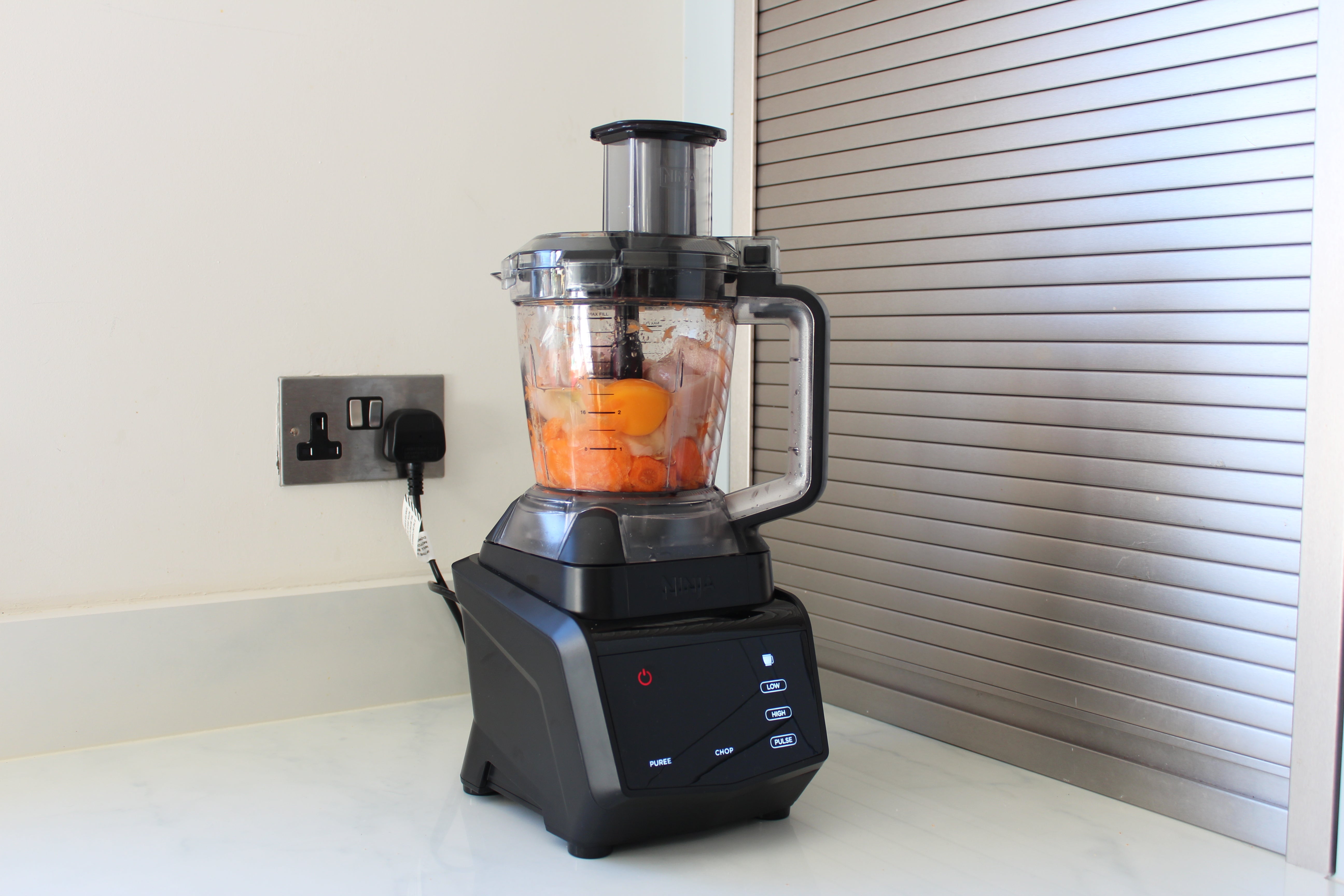 This required the programme to be run repeatedly since it was only 11 seconds long. Some scraping down was required to nudge the ingredients towards the blades, which were efficient but limited by the capacity of the bowl.

The burgers cooked evenly but the meat was over-processed. 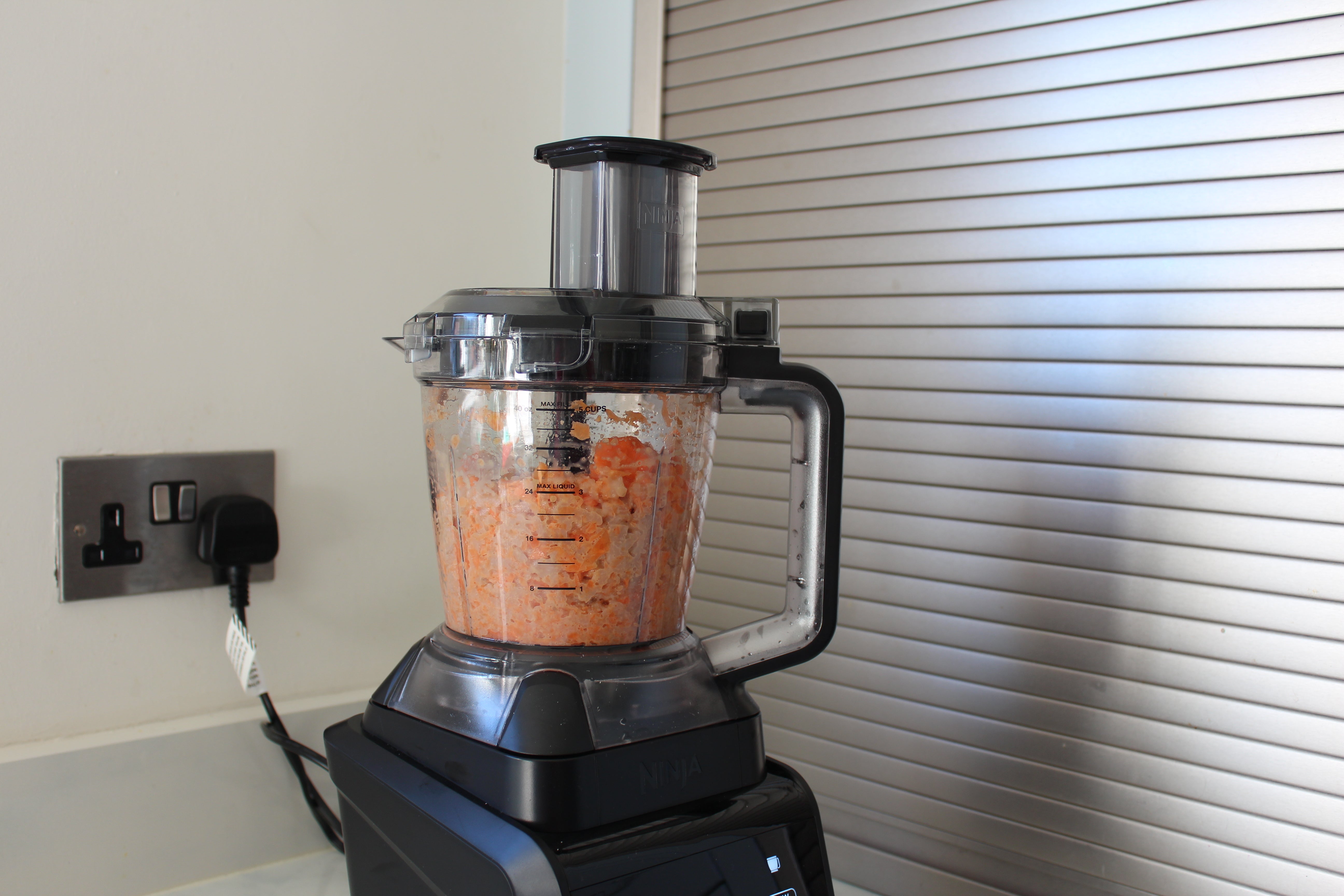 All the parts that come into contact with food are dishwasher safe, although there are nooks where debris could start to gather. Washing the stacked blades by hand was hazardous as they’re sharp. A dedicated brush would have been handy.

Vacuum-sealing adds an extra step to your morning routine, but if you’re serious about smoothies then the pay-off may be worth it. It’s handy if you want to blitz ingredients the night before but are put off by discolouration, or are keen to maximise the health benefits of every fruit and vegetable in the mix.

For others, the vacuum pump may be gimmicky, and one more thing to store in a drawer – and a traditional food processor will do a better job. Look beyond the pump, though, and the Smart Screen is still a versatile three-in-one blending machine, which could justify the £200-plus price on its own.