“You are dead. Do you wish to continue.”


No. I don’t wish to continue. I wish to fly over to Tecmo’s office and scream in the face of whoever thought the difficulty level on this game was fair and reasonable. I wish to hurl my joypad at the screen, tear the disc out of my console and jump up and down on it until it’s a mass of shattered plastic on the carpet. At the very least, I wish to take the disc out, put it back in the box, scoop up something nasty from the nappy my daughter filled this morning and post the whole, evil-smelling mess back to the people responsible for developing it. No. I do not wish to continue at all. 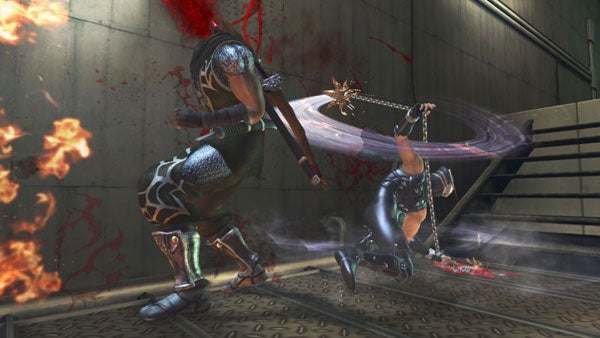 Difficulty is the defining issue for Ninja Gaiden 2. Despite the introduction of a kinder, gentler acolyte level and the removal of the whole, mildly humiliating Ninja Dog routine – which implied you weren’t much of a man if you can’t cope with the harsh way of the true ninja – Ninja Gaiden 2 is still a hardcore game. Even the most average section of the game is ripe with opportunities to die; with scores of enemy ninjas who are perfectly capable of ripping a newbie player to shreds in seconds. It’s a game of skill, not just basic level button-mashing. If you can’t get your head around a fairly complex system of attacks, blocks, evasive manoeuvres and counters, then you won’t get past the second level. You might not even make it past the first. 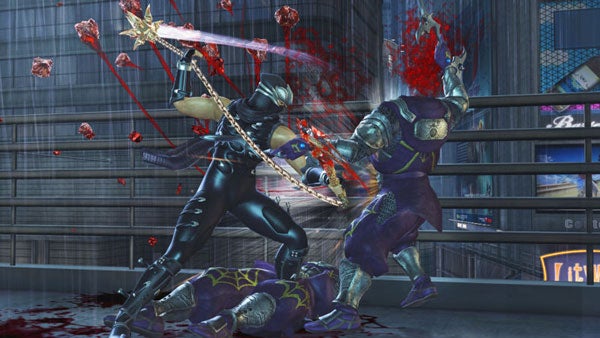 At its best, Ninja Gaiden 2 does close combat as well as – if not better than – any other game you can mention. The weapons, whether the legendary Dragon Sword, the fiendish ninja claws or the brutal Lunar Staff, are terrific, creating sweeping arcs of bloody destruction everywhere you look. The controls are speedy, responsive and remarkably sensitive to timing. The moves are frequently spectacular, and slicing, slashing and bludgeoning through a group of flabby demons or rival ninjas never gets tired. Of all the action games I can think of, only the God of War games and Devil May Cry 3 and 4 can even hope to surpass Ninja Gaiden 2 when it comes to close-up violence, and for sheer pulse-pounding brutality, only Sony’s Greek myth epics provide an ample comparison.

On screen, Ninja Gaiden 2 stands as a new benchmark for video-game bloodshed. The red stuff isn’t merely hinted at; it’s splashed around by the bathload, as torsos and arteries are slashed open, and limbs and heads removed forcibly. If you winced, whooped and hollered your way through the ‘House of Blue Leaves’ scene in Kill Bill Volume 1, then you’ll be glad to see that the guys at Team Ninja have done their best to exceed it. Hysterically, many of your maimed opponents will even limp or crawl their way towards you for more of the same treatment, doing their best to grapple you to the ground and explode in a last-breath gesture of revenge. 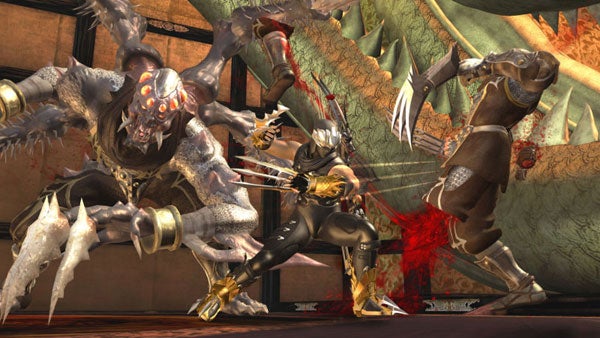 When you’re not fighting, Ninja Gaiden 2 still goes big on Prince of Persia-style acrobatics. Our ninja hero, Ryu Hayabusa, can still be found racing across walls, wall-jumping his way up elevator shafts and even cheerfully trotting across water. He’s still a master of the flagpole swing and the backflip, and he can still employ a range of cool ninja manoeuvres that help him whisk through a crowd of foes whilst in combat.


And this is – without any doubt – a stunning-looking game. Being picky, I’d say that it doesn’t have the jaw dropping sense of scale that made God of War 1 and 2 so special. Nor can it match Devil May Cry 4 for its beautiful, baroque background scenery. In fact, at times there’s something a little sterile, a bit last-generation about the rather basic environments. However, when you throw in scores of enemies, the beautiful animation, some gorgeous lighting effects and all that spraying claret, Ninja Gaiden 2 looks simply amazing. The levels set in a storm-battered, fiend-infested New York are just an early highlight, as the rain pours down and waves batter the harbour while Ryu scraps with sorcerers and demons in the unnatural glow of neon signs. 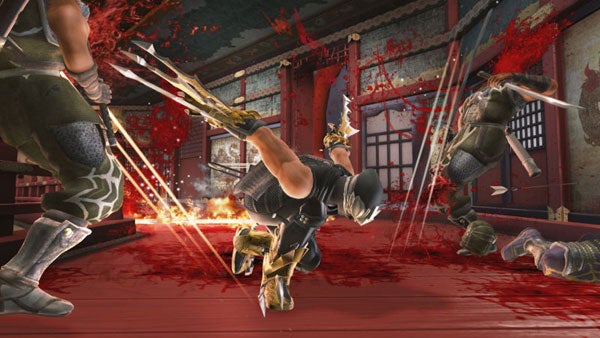 This is a wonderful game to behold, and it should be a wonderful game to play. But it isn’t. Well, not all of the time, and not always for everyone, anyway. If you’re a huge fan of Ninja Gaiden, Ninja Gaiden Black or Ninja Gaiden Sigma, then you already know what to expect, and you’ll be prepared for it: the long stretches where you’ll batter your way through hordes of ninjas only to get felled by a small collection of double-hard bastards with the power to knock you down in seconds; the sections where you’ll be under attack by a bewildering number of foes while archers snipe at you from positions high above; those bits where you just about make it through an epic brawl only to have one guy get in with a cheap, high-powered attack at the very last second. Some people take this stuff on the chin, time and time again, and come back saying ‘I just wasn’t good enough’ or ‘I failed that time, I won’t fail now.’ Others start wondering whether there might be something more rewarding we can do with our time. In this way, Ninja Gaiden 2 cuts its potential audience right down the middle. You either take the (appallingly) rough with the (brilliantly) smooth, or you get very, very annoyed and give up.

I think the bosses will be the sticking point for a lot of people. They are do-able (just), but – blimey – they’re hard work. At times you’ll find yourself on the wrong end of such a brutal and remorseless wave of attacks that you’ll barely have time to use a health potion. On occasion, you’ll spend thirty minutes or more desperately trying to work out how you can make the next attempt successful when your opponent seems to offer no realistic opportunity for defeating them. It can be hugely dispiriting, not least because these are some of the most brilliantly designed and impressively fiendish bosses we’ve seen outside Devil May Cry 4. But is it a good thing that they leave you wanting to throw in the towel? 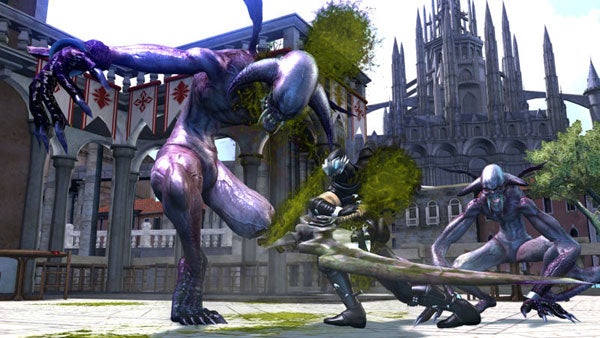 And there are times when Ninja Gaiden 2 just doesn’t play fair; times when you enter a new area to be immediately and unavoidably set upon by a bunch of thugs who wipe out half your health bar in an instant; times when enemies come seemingly from nowhere to open a can of whup-ass on you, without any hope of evading or hitting them beforehand. These problems are made worse by an infuriating camera that does its best to ensure that you can’t see the guy who’s pounding on you or the archer who’s shooting at you or the three huge demons who’re just about to grab you and try you as a snack. The boss battles are again, the low points here. For instance, is it too much to ask that when I run away from a boss then turn swiftly towards him, hoping to aim one of my arrows, the camera actually point in the direction I’m facing and not in the direction opposite? Talk about making a difficult task nigh impossible. 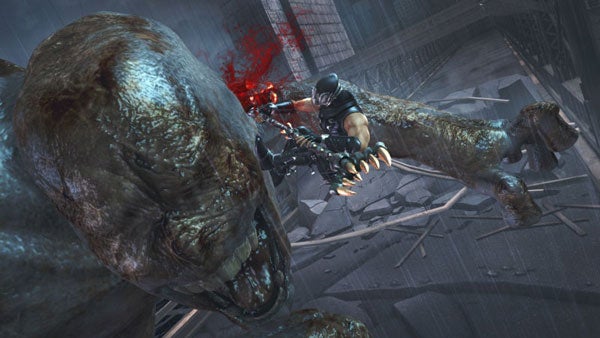 What’s more, some of the gameplay is surprisingly old-fashioned. The path through levels is shockingly linear, ludicrously artificial barriers are everywhere, and there’s little in the way of adaptive gameplay or real enemy intelligence. It’s a bigger, bolder Ninja Gaiden, but is it a noticeable step forward from the first? Not from what I’ve seen. 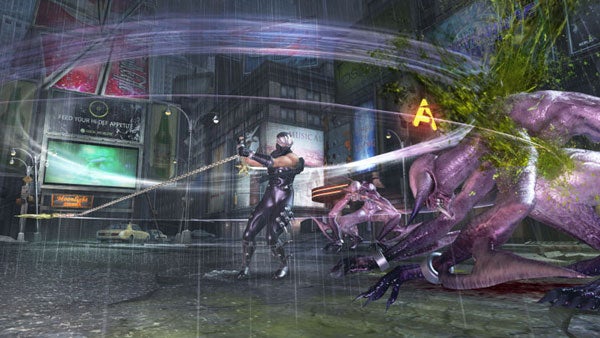 Despite all this, there are times when I love Ninja Gaiden 2. Sometimes the combat is so exhilarating and the flow of action from fight to acrobatic sequence to fight so satisfying that I start to hope that this could be the game for me, after all. Admittedly I’m not a big fan of Team Ninja’s increasingly ridiculous storylines, with their complete disregard for cause/effect or motivation and their rather cringe-worthy obsession with breasts, slime and gore (preferably all three, at once), but even I can’t deny the appeal of Ninja Gaiden 2’s crazily gung-ho approach. I can even see that, with increased numbers of checkpoints and the new difficulty mode, Team Ninja has at least tried to reach out to a wider audience. This only makes it more of a shame that they failed. I can’t help finding Ninja Gaiden 2 a hugely frustrating, mindlessly aggravating pursuit much of the time. It’s not that I’m a complete wuss, it’s just that – for me – Devil May Cry 4 and God of War 2 always stayed on the right side of ‘too bloody difficult to bother with.’ Ninja Gaiden 2 does not. 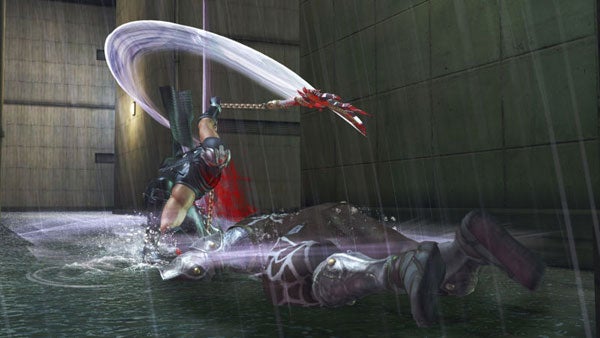 That doesn’t mean it’s a bad game or that you won’t like it. Go on. If you consider yourself a hardcore gamer and you really loved the first Ninja Gaiden (in one of its forms) then you can happily add 1 or 2 to my score and spend the next few weeks working your way through it on the various difficulty levels, finding every secret, unlocking every bonus and posting videos of your triumphs on YouTube. There’s nothing wrong with that at all. If, however, you don’t consider yourself a hardcore gamer then I’d recommend you avoid Ninja Gaiden 2. There are other, similar games – notably Devil May Cry 4 – that you’ll find more approachable and more rewarding.


A beautiful, bloodthirsty Ninja action game, but one that’s just too frustrating for the average gamer. If you can’t stand the hardcore heat, stay out of the Ninja kitchen.