The Nikon P1000 is a bridge camera, sitting in the zone between compact point-and-shoots and interchangeable lens cameras – but it’s far from your average bridge camera.

Less a superzoom than a megazoom, its standout feature is its 125x optical zoom lens, which offers a focal length range equivalent to 24-3000mm and far outreaches anything else on the market. This huge barrel of a lens dictates that the P1000 is a large camera, far bigger and heavier than most bridge models.

Other notable features include 4K video recording, an OLED viewfinder and a flip-and-twist LCD screen.

As mentioned above, this is a large camera. Even taking the lens barrel out of the equation, the rear portion of the P1000’s body is the size and shape of a full-size DSLR. Add on the giant lens and you’re left with a camera bigger than most DSLRs; you’ll likely need a good-sized camera bag to haul it safely around.

Weight-wise, however, things aren’t too awful: at around 1.4kg, it’s a lot lighter than a DSLR with a super telephoto lens attached. We found it painless enough to carry around for a few hours using the supplied camera strap. 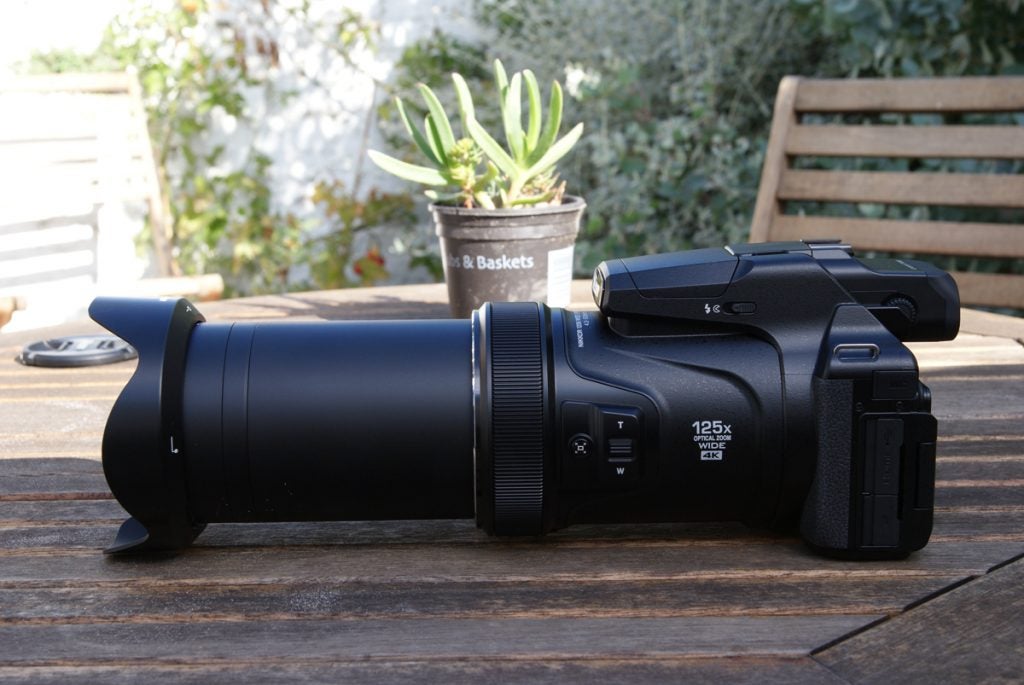 There’s also a small lens hood included in the box, which helps shield the lens from sunlight and rain. Nikon makes no claims regarding weatherproofing, though, so we wouldn’t advise pulling it out in anything more severe than a bit of light drizzle – if moisture were to get inside the lens, it could cause some major problems.

The camera features a large pop-up flash (it needs to be tall to project light over the lens), plus a hot shoe for attaching an external Nikon Speedlight flash or a microphone.

With Wi-Fi and Bluetooth inside, it’s possible to link the Nikon P1000 wirelessly to a phone or tablet running the SnapBridge app. The app lets you sync photos from camera to mobile device as you shoot using Bluetooth Low Energy, and transfer videos and geotag using your phone’s GPS via Wi-Fi.

Just underneath the hot shoe you’ll find the impressive OLED viewfinder, which switches on via a sensor when you lift the camera to your eye. It’s large and detailed, and a perfect alternative to the 3.2-inch LCD screen when it comes to composing photos on a sunny day.

Holding the camera up to your face has the added advantage of keeping it steadier too, and you’ll want every iota of stability you can grab when shooting at the full 3000mm zoom. 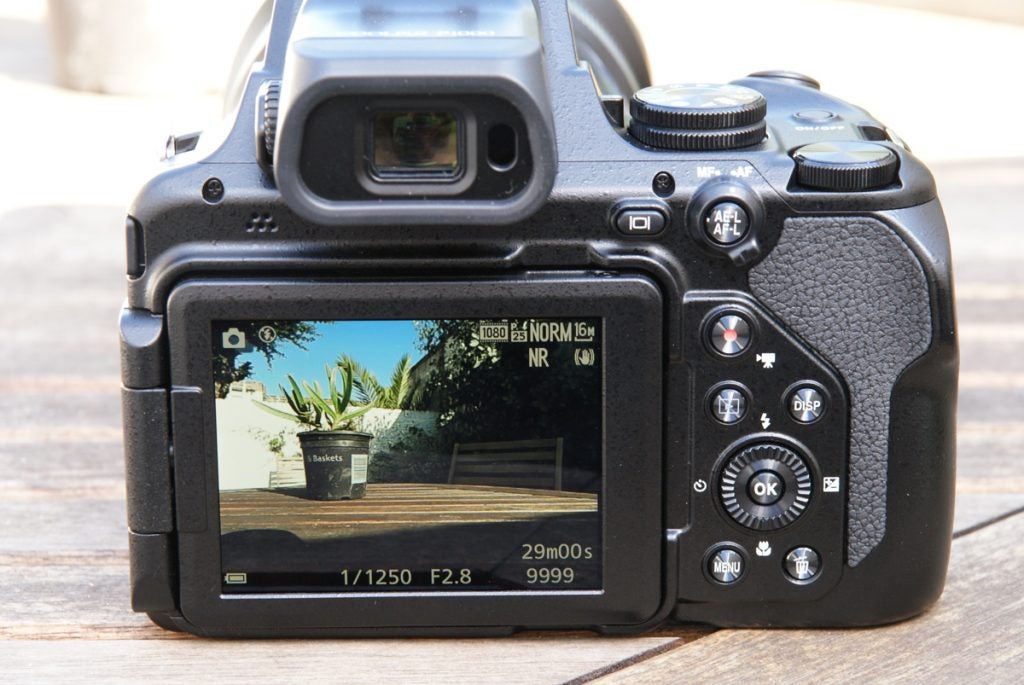 The screen itself is more than adequate, although a touchscreen would have been a useful addition, if only to help set focus points quickly. The screen can flip and tilt, and be made to face forwards if you feel like taking a selfie.

While the P1000 is bulky, it’s not particularly unwieldy. The large lens barrel and right-hand grip give you plenty to wrap your mitts around when shooting, and Nikon has placed controls in logical, well thought-out spots.

For instance, on the left of the lens barrel, where your left thumb sits, there’s a zoom rocker plus a button that toggles between whatever focal length you’ve just zoomed to and a much wider angle. The latter button is invaluable when trying to zero in on a far-off subject, as it means you don’t have to zoom all the way back to wide angle, merely tap a button to quickly snap back there instead. 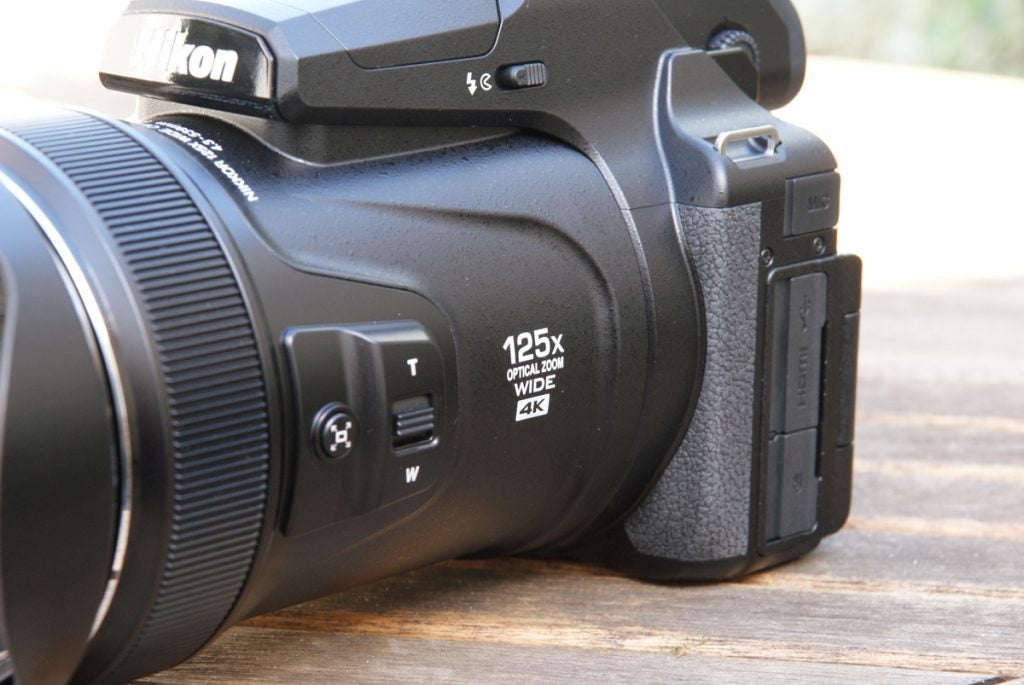 The rest of the control layout resembles a DSLR, with a mode dial on top, cursor controls and shortcut buttons on the back, plus another zoom lever around the shutter button (that’s right: you have two ways to zoom here – one for each hand). It’s a decent setup, offering users quick access to the most frequently-used settings. There’s also a huge twistable ring around the lens barrel that can be set to control exposure compensation, ISO or white balance, but curiously not manual focus – which doesn’t appear to be an option on this camera at all.

Autofocus is fairly swift and accurate, which means the loss of manual focus won’t seem a huge drawback to many users (although I find it useful for video and macro photography, where the autofocus can’t always be trusted to lock onto the spot you want it to).

Taking sharp photos at 3000mm is going to require a tripod, unless your camera has excellent image stabilisation, and we’re happy to report that Nikon has nailed the latter with the P1000’s vibration reduction tech. In decent lighting, it’s entirely possible to get sharp, steady shots at full zoom. Even videos can look fairly smooth if you manage to keep a reasonably steady hand. It’s impressive stuff, and vital, because without effective optical image stabilisation, this camera’s extreme telephoto skills would be nigh-on worthless.

Note that you’ll still need a tripod or similar support if you want to photograph the moon or stars, as the camera’s small 1/2.3-inch sensor and closed-down aperture at full zoom mean slow shutter speeds are necessary at night.

Related: Best of Photokina 2018: 10 cameras you’ll want to snap up right away

As mentioned above, despite its size the P1000 has a physically small sensor – just 1/2.3 of an inch, which is the same size you’d find on, say, a pocketable rugged point-and-shoot camera like the Nikon Coolpix W300. Small sensors aren’t a huge problem when light is plentiful, and during the daytime you can point the P1000 at pretty much anything at any focal length and get usable, sharp results. 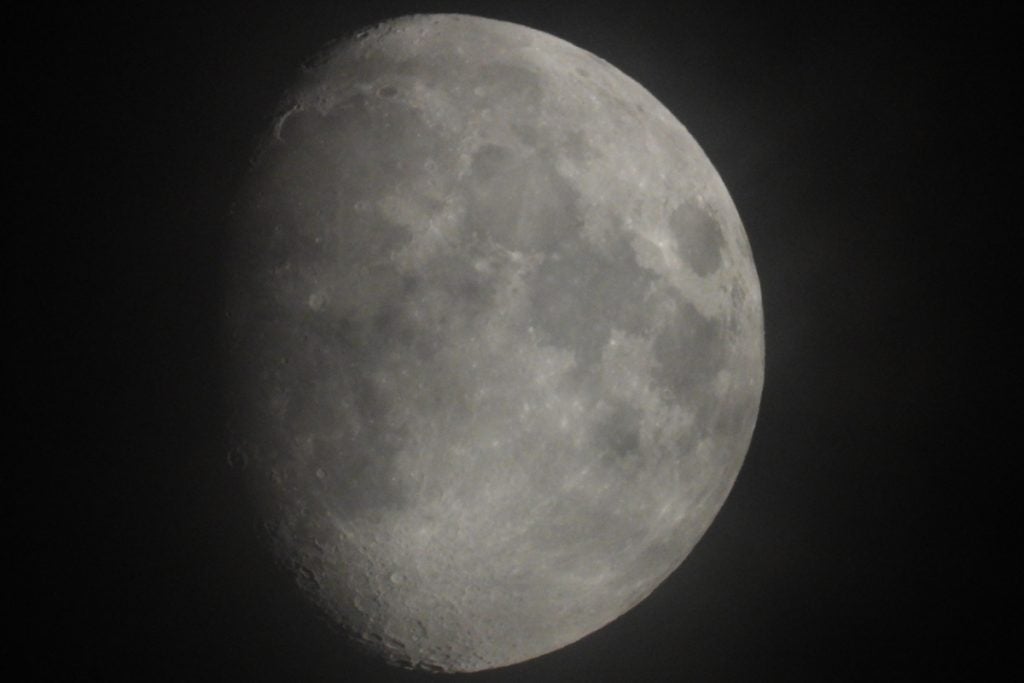 At night, or if you’re shooting something far off and in shadow, the small sensor and the smallish aperture (it goes from f/2.8 at 24mm to f/8.0 at 3000mm) make the shutter speeds a little slow. This means that capturing sharp images of, say, a duck that’s flapping about in the water can be nigh on impossible, as you’ll get blurry results every time. It’s essential to pick your battles with this camera, and know what it can and can’t do in order to avoid disappointment. I was left wondering what might have been had Nikon used a larger one-inch or even APS-C sensor; perhaps the P1000’s successor in a year or two will deliver.

I don’t want to seem too down on the image quality, though, because simply having the ability to zoom from wide angle to 3000mm is something very special indeed. It’s never been available in a camera like this before, and you can see from our test shots just how much range and reach that lens provides. With the excellent image stabilisation, it’s entirely possible to capture sharp, detailed and frame-filling photos of something so far off you can barely see it with the naked eye. 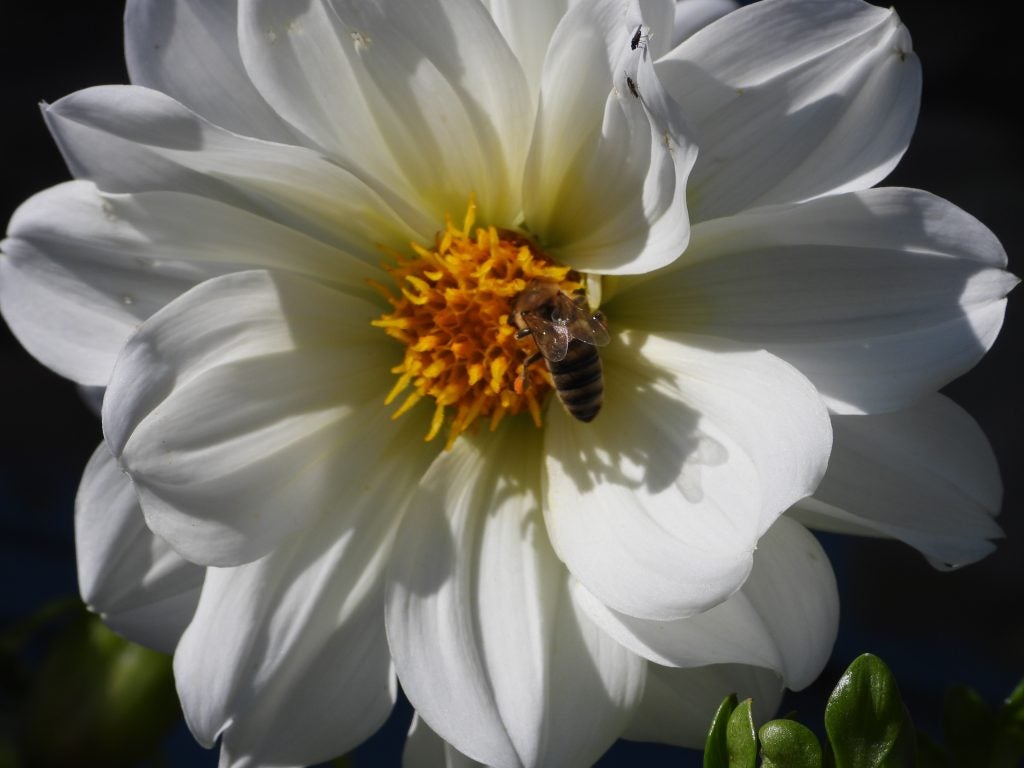 The P1000 is also surprisingly nifty at shooting things up close. Put it into macro mode and you can extend the zoom to around 135mm and get lovely sharp results of subjects just a few centimetres from the front of the lens.

The in-camera JPEGs exhibit strong colours and very little noise at low ISO settings, but you do have the option of shooting in Raw format if you want to fully process images yourself.

Finally, a word about video. The P1000 is able to shoot 4K video at 30fps, and it’s impressive. We’ve never been blown away by 4K from a small sensor like this before, but the P1000’s great optics and image stabilisation put its UHD recording skills at a much higher tier than smaller cameras with the same size sensor. There’s detail, clean colours and a nice smoothness in evidence – take a look at our samples to see for yourself.

The P1000 definitely isn’t for everyone. While it has some versatility, it’s really a camera for those who want to shoot things a long, long way away, and are willing to put up with the large size and large asking price to do so. The £1,000 asking price gets you a lot of camera these days, and we suspect that many people would get much better value by opting for an entry-level compact system camera from Panasonic, Sony or Fujifilm, plus an extra lens or two.

However, if you’re a twitcher about to embark on the birdwatching holiday of lifetime, a safari-goer, a plane-spotter or other enthusiast who values reach above all else, there’s nothing else out there like this, and certainly nothing else at this price.

Amazing reach from a relatively small camera, but it’s not without its limitations