For about two years now there has been a race going on between Canon, Pentax, Konica Minolta, Olympus and Nikon to produce the first truly mass-market digital SLR. The price point that they have all been trying to beat is £500 for a camera and a lens, and the competing models all have 6 megapixel sensors. Pentax has come close with the *ist DL plus an 18-55mm lens available for £599. Canon has come closer still, pricing the EOS 350D kit at £579, and Konica Minolta’s Dynax 5D can be found for £524.49 if you shop around. However Nikon has finally done it. You can buy a D50 complete with 18-55mm lens for just £474.94, a price which compares well to the current crop of high-end fixed lens cameras, making the D50 a real low-cost alternative to and an ideal entry-level D-SLR. That £474.94 is the High Street price; if you shop around online you can find the same package for as little as £460, although of course the usual caveats about grey imports and long delivery times apply. 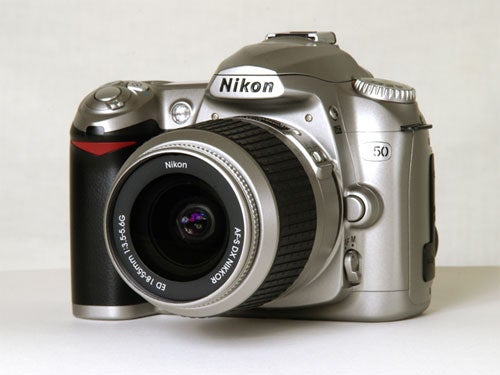 The danger when designing a cut-priced SLR is that it may end up with so many cut corners that it lacks the performance and quality that an SLR photographer is looking for. However Nikon has spent the past 50 years building a reputation for first-class SLR camera design, so one hopes that it’s not about to ruin that record by making such a significant camera as the D50 anything less than excellent.


The model I was sent for review was the silver finish version, although I personally think that black looks better. Like the silver finish on the Canon EOS 300D, it looks cheap and plasticky, while the black version looks far more business-like and professional. The D50 is quite heavy for a basic SLR, weighing 620g compared to 565g for the Pentax *ist DL and 540g for the Canon EOS 350D. However the D50 is also quite a bit larger than either of these rival cameras, so ironically it feels lighter, or at least less dense. That’s not to say that the D50 feels cheap, because as soon as you pick it up and handle it, the familiar Nikon aura of solid handling, excellent design and superb build quality becomes apparent. The D50 may be an entry-level model, but it is an entry into the most widely-used professional camera system in the world. Sorry, Canon owners, but you know it’s true. 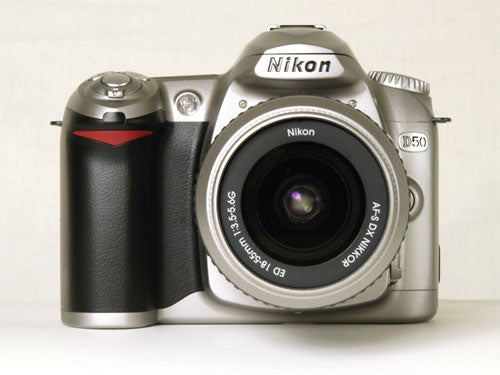 The D50 bears a strong resemblance to the D70 launched last year, but there are some obvious differences. For instance, the D70 has two input wheels whereas the D50 has only one and the D50 has no aperture preview button below the lens. More significantly the D70 stores its images on CompactFlash cards, but like the Pentax *ist DL the D50 uses SecureDigital (SD) cards, presumably because Nikon assumes that most people upgrading from a compact camera will be more likely to buy the D50 if they don’t have to replace all their memory cards as well. There are other minor cosmetic differences, but the initial impression is that the D50 is the D70’s little brother. This is somewhat misleading, because in some ways the D50 has the better specification of the two cameras. It has a slightly larger final image size, a larger LCD monitor, improved AF system, improved metering, a better built-in flash, a USB 2.0 PC connection and shoots uncompressed RAW files, which is vital for maximum picture quality. 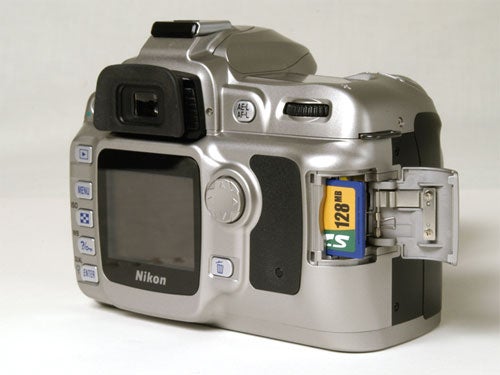 Where money has been saved is by shaving off additional features that most amateur photographers won’t even miss, such as wireless flash control, viewfinder composition grid, the backlight in the LCD display, and the ability to fine-tune white balance settings. The result is a camera that is much easier to use. There have been a few minor performance sacrifices, for instance the D50 has a maximum shutter speed of 1/4000th sec, against the D70’s 1/8000th, and a continuous shooting mode that fires 2.5 frames a second as opposed to the D70’s 3fps, but even so it is no way inadequate. Any keen amateur photographer will find that the D50 can provide all the creative control they are looking for.


Of course the real test of an entry-level camera is not its appeal to professional photographers, but how accessible it is for someone coming from a background in compact snapshot cameras, and here the D50 scores highly. 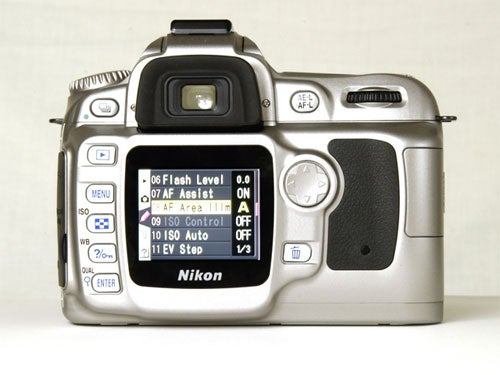 The main shooting control is the big mode dial on the left of the top plate, which includes such familiar options as full auto, portrait, landscape, child portrait, sports/action, macro and night scene. If anyone is unfamiliar with these options, there is a ‘help’ button on the back, which presents a brief description of each mode and what it is used for. As well as these options, there is of course the full range of manual exposure settings: full manual, aperture or shutter priority and program auto mode. The program mode can be biased by turning the input dial.

The other controls are just as accessible, with exposure compensation, drive mode, flash mode, ISO setting, white balance and image quality all requiring nothing more than the press of a button and a turn of the input dial. The only time you need to go into the menu is to make a set up adjustment, such as manual flash power, colour space, exposure compensation interval etc. If anything the D50 is actually easier to use than many fixed-lens cameras. 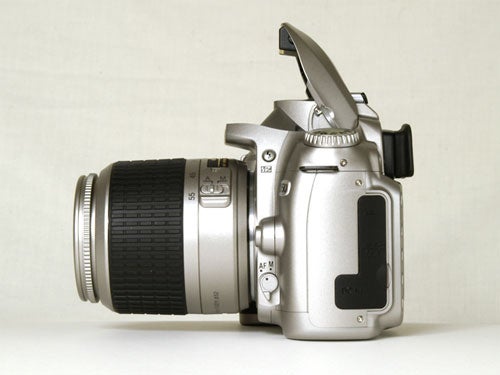 It’s all about the picture quality at the end of the day, and unfortunately here’s where it all goes horribly wrong somehow. The lens sold with the D50, an 18-55mm F3.5-5.6 G ED DX, is not one of Nikon’s proudest achievements. Compared to the solid high-performance optics that have made the company famous, this is a nasty plastic tube that feels cheap and actually rattles when shaken. It suffers from problems normally associated with compact zoom lenses, specifically barrel distortion and slight blurring in the corners of the frame at wide angle.


Added to this, the D50’s auto white balance seemed to have a bit of a problem shooting on an overcast day, producing a significant blue cast over many images. I also discovered some nasty purple fringes on high-contrast edges in several shots, which is not something I’d have expected from a Nikon SLR. Although level of detail in the centre of the frame was good, focusing was very quick and accurate, and noise control at high ISO settings is among the best I’ve seen, I have to say that even considering the lousy weather I was rather disappointed with the overall image quality, especially considering the good things I’ve read about it on other review sites.


The D50 kit is a mixed bag. On the one hand it is a truly affordable, easy-to-use digital SLR that offers an entry point into the huge Nikon system. It is well designed, well made and performs admirably. On the other hand it has a sub-par lens and some problems with image quality. Maybe the D50 would be better with a more expensive lens, but there’s no denying that at under £500, it is going to be found under a lot of trees this Christmas. 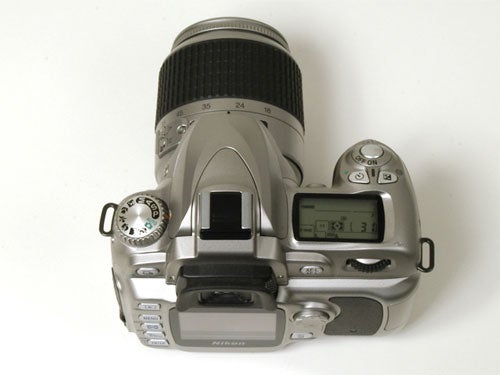 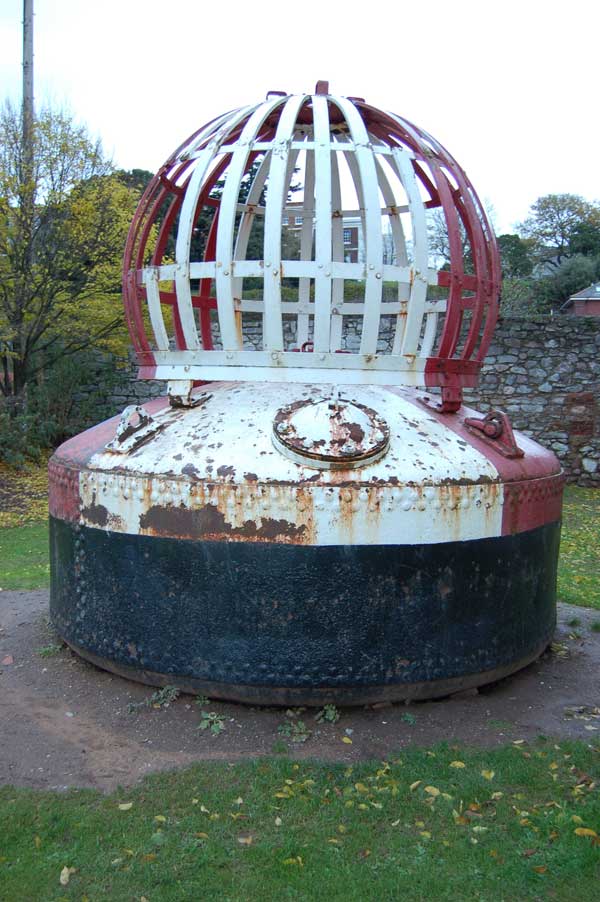 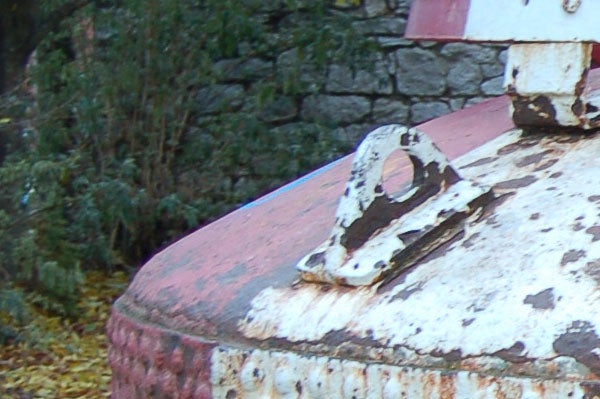 There is a small amount of motion blur in this shot, taken at 1/25th sec at the minimum 200 ISO setting, but no image noise. 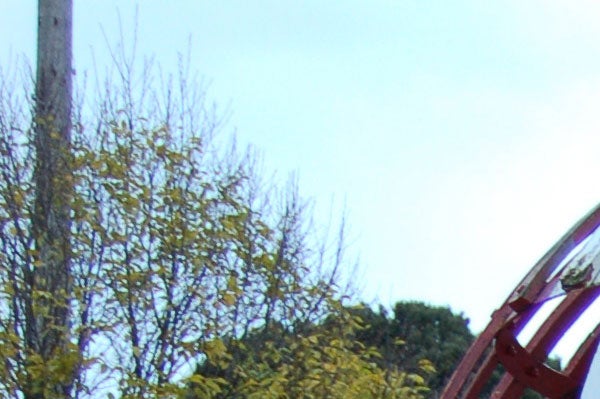 A slightly sharper shot at 1/50th sec and 400 ISO. There is still no noise, but there is some purple fringing at the top of the frame. 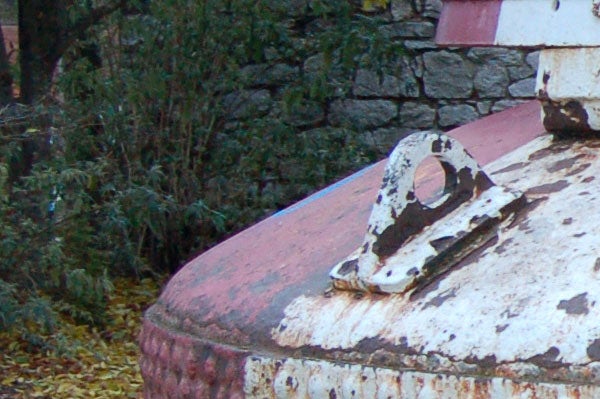 At 800 ISO there is still no image noise at all, which is highly unusual. 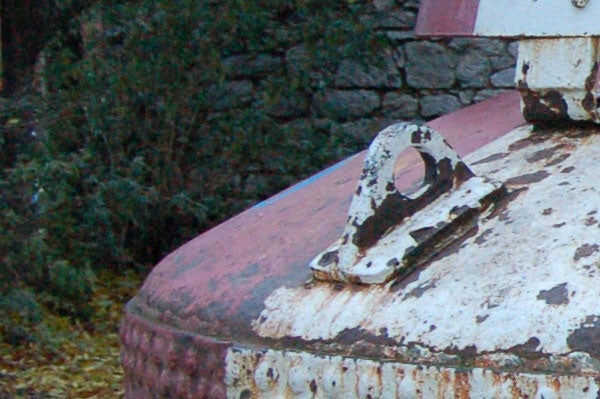 At 1600 ISO there is some colour speckling on the darker portions of the frame, but overall noise control is excellent. 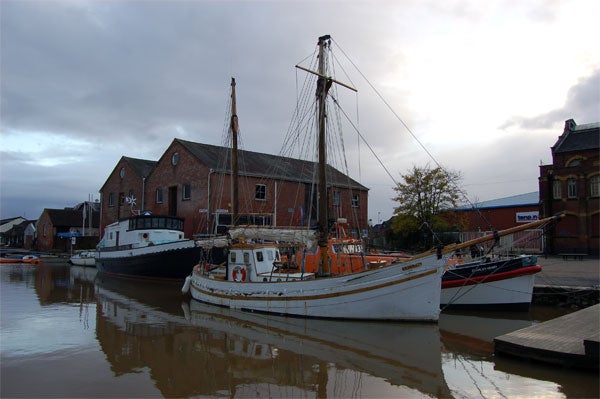 Unfortunately this was the best weather we’ve had all week here in sunny Devon. The D50’s exposure meter copes OK, but the picture is still very dull 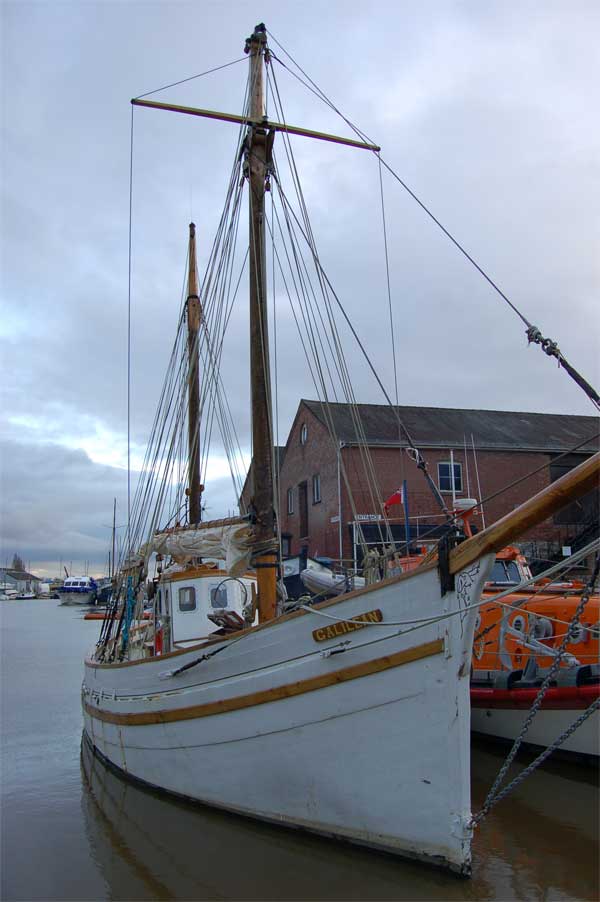 The lens supplied with the D50 is not particularly good. In this shot you can see the effects of barrel distortion at the wide angle setting 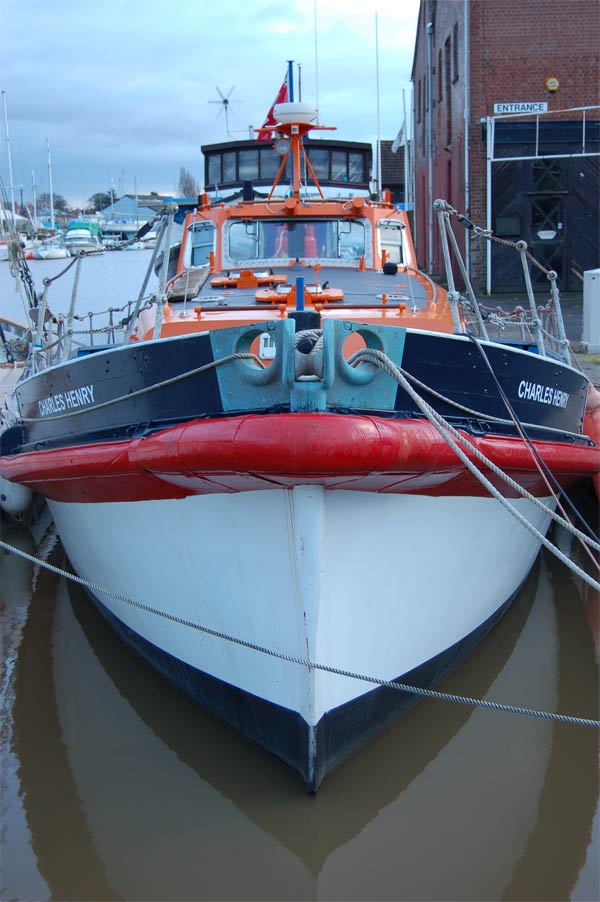 The overcast conditions seem to have confused the automatic white balance, causing a blue colour cast on this shot. The hull of the boat should be white. 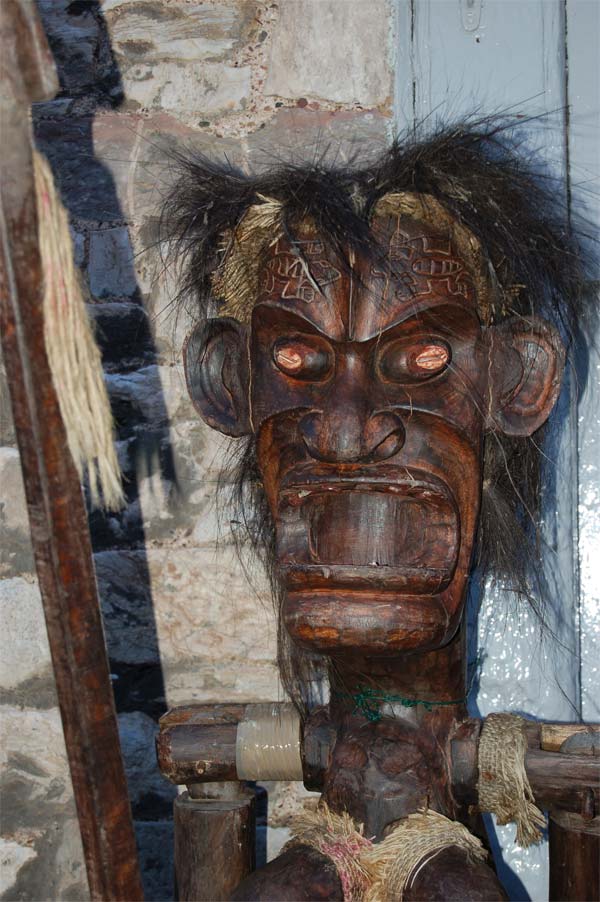 The built-in flash on the D50 has slightly more wide coverage than that on the D70. With TTL metering it produces good exposures indoors at close range. 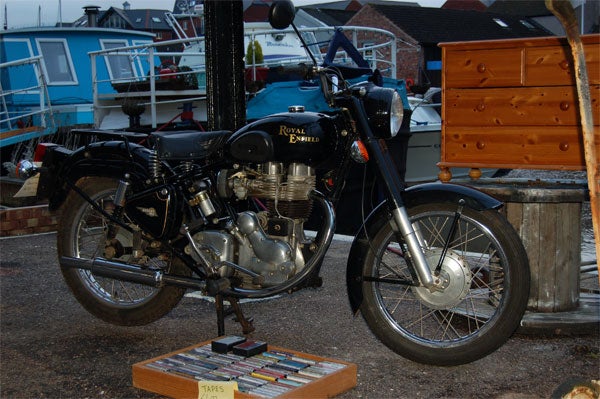 Balancing the flash against the ambient light produces a nice effect with this bizarre collection of objects.