Last month I reviewed the Nikon CoolPix S600, a high-spec 10-megapixel ultra-compact camera near the top of Nikon’s premium S series. Today I’m looking at the next model down in the line-up, the S550. Although it looks very similar and also has a 10-megapixel sensor, it is a very different camera in a number of ways. 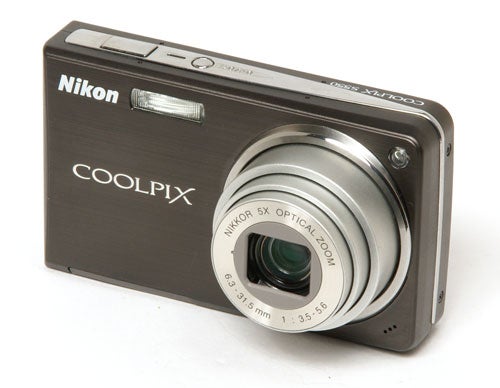 The CoolPix S550 is one of a new generation of Nikon premium ultra-compacts that started with the launch of the S500 in June last year. The range, denoted by triple-digit numbers, now stands at eight models, ranging from the ultra-slim 7.1-megapixel S200 to the 12.1-megapixel S700. The S550 is toward the top end of the range in terms of specification. As well as its 10.0-megapixel 1/2.3-inch sensor it features a 5x optical zoom lens with a focal length range equivalent to 36-180mm, a 2.5-inch 230k wide-view monitor and electronic image stabilisation at slow shutter speeds. Additional features include face detection and the new must-have, smile detection shutter release. 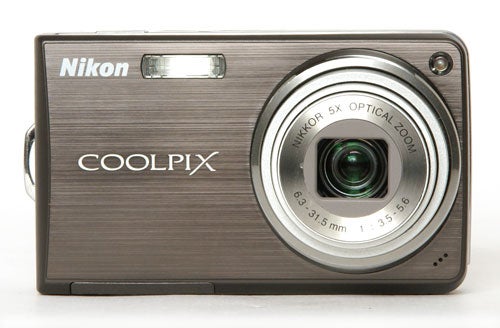 High-spec ultra-compact cameras with longer zoom lenses are becoming a lot more popular of late, and the S550 has to compete with the likes of the new Casio Exilim EX-Z100, another 10MP camera which has a 4x zoom with 28mm wide-angle (£170), the impressive-looking Sony Cyber-shot DSC-W170, which has 10.1 megapixels, 5x zoom with 28mm wide-angle and optical image stabilisation (£170), the even more daunting Panasonic Lumix DMC-FX500, which has 10MP, a 5x zoom Leica lens with 25mm wide-angle and optical image stabilisation (£240), and of course the 10MP 5x zoom Canon IXUS 970 IS (£230). The CoolPix S550 is priced at around £200 on the high street, but can be found for as little as £160 by shopping around online, which sounds a bit more reasonable, even though it lacks mechanical image stabilisation.

While trying to decide on how best to describe the S550, the word that kept coming to mind was “likeable”. It’s a relatively simple camera, and the design reflects this. The overall style is very unassuming, a simple rectangular shape with a minimum of extraneous decoration. The body is made of aluminium, and finished in a pleasant brushed texture. It is available in silver, dark blue or the gunmetal colour of my review sample. It is a very small camera, measuring just 90 x 53.5 x 22 mm, and weighs only 135g including the battery.


The control layout is very simple, with just a D-pad and four buttons on the back panel. Thankfully Nikon has opted for a normal four-way pad this time, rather than the unwieldy rotary control found on the S600 and S500. It is a lot less fiddly and frustrating to use than either of those models, and despite the small size it is very comfortable and easy to hold. Another welcome difference to some of the other S-series models is that the S550 has shooting priority, which means that half-pressing the shutter button cancels the menu and returns the camera to shooting mode, so you’re far less likely to miss a spur-of-the-moment shot. 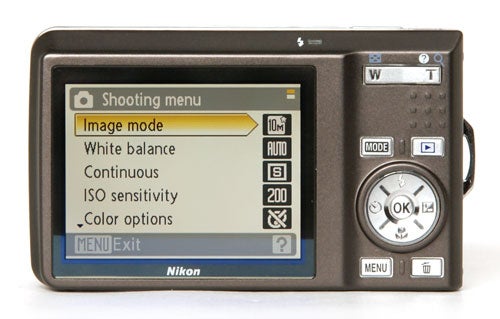 The controls are also quite straightforward, with a Mode button that selects between the various basic shooting options, including the smile-detection shutter, a high-ISO mode, movie mode, sound recording and a 15-program scene mode, as well as the basic set-up mode.


The main shooting menu is also very simple, with only seven entries over two pages, but it does include some useful and novel items, such as an interval timer, manual focus point selection, and a new feature called Distortion Control, which digitally corrects lens distortion at wide-angle zoom settings. I’ve seen this before on a couple of camera, particularly some recent Fujifilm models, but it’s new to Nikon. Unfortunately it doesn’t appear to work terribly well in this instance, over-correcting wide-angle barrel distortion at close range and producing pincushion distortion instead. 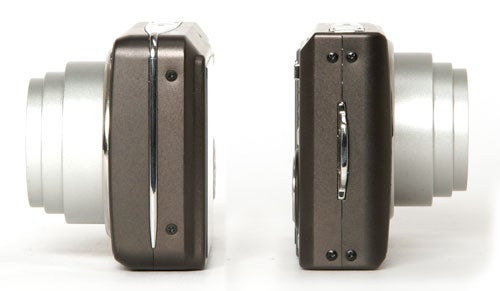 The Electronic Vibration Reduction system on the other hand works extremely well. This is a genuine digital image stabilisation system, rather than other “digital shake reduction” modes which just increase the ISO setting. Similar systems have been used on digital cameras for a while now, and the technology is quite well developed. It does result in a slight reduction in overall image quality and slower performance, but I found I was able to take blur-free shots at some very slow shutter speeds, as low as 1/15th of a second even at longer focal lengths.

The S550’s overall performance is a bit disappointing. It takes just under three seconds to start up and around two and a half to shut down again, which is rather slow by premium compact standards. In single-shot mode the shot-to-shot cycle time is approximately three seconds with the vibration reduction turned on, and approximately two seconds with it turned off. The delay appears to be in writing to the memory card, however reducing the image quality to normal rather than fine did nothing to improve this. In continuous shooting mode it can manage one shot a second for the first ten frames, but then slows down considerably. 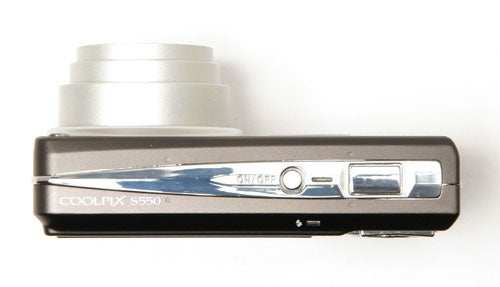 The autofocus system appears to be the same one as the S600. It is reasonably quick in good light, but slows down noticeably in lower light conditions, and sometimes fails to focus even in light you can read by. However it is a lot less hesitant at longer zoom settings than some previous Nikon compact camera AF systems, and it will focus darkness at close range thanks to a good AF assist lamp.


When I saw the size of the tiny 680mAh Li-ion battery that powers the S550 I was concerned that it would have a very poor duration. Nikon claims a duration of 200 shots, but in fact I was able to shoot well over 200 photos, many of them with flash, over the course of a week before the battery indicator dropped to one bar.


The flash is a bit weak and noticeably darker in the corners of the frame, but it has very good exposure metering even at very close range, and charges quickly enough to keep up in most social situations.


The S550’s final image quality has its ups and downs. Exposure metering is very good, striking a nice balance between shadow and highlight detail. Unlike some other recent compacts the S550 has no facility to boost dynamic range, but nevertheless it coped well with high-contrast situations. Colour rendition is very good, with rich natural tones and plenty of detail in highly saturated areas. One weak point however is the lens, which is rather soft right across the frame and especially in the corners, which rather lets down the potential quality of the sensor. It also produces a lot of uneven distortion at the wide-angle end, and the Distortion Control feature doesn’t help much.


Image noise is also a bit of a problem, with some colour mottling even at the minimum ISO setting, and significant loss of detail at 400 ISO. As is usually the case the very highest ISO settings – 1600 and 2000 – produce very poor results, with major loss of detail and distorted colour balance. 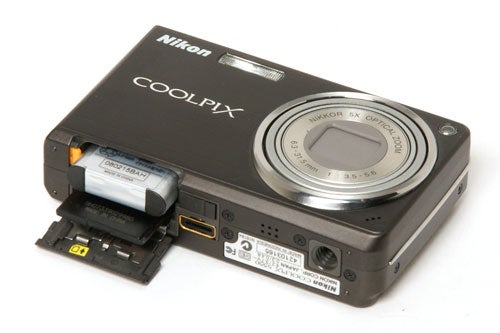 The CoolPix S550 is a likeable little camera, very simple to operate and producing good results in most normal situations. It is solidly made and sensibly designed, and has very good handling despite its small size. The 5x zoom range gives it greater versatility than typical pocket compacts, and the electronic vibration reduction helps to cope with the longer telephoto end. Overall performance is a bit slow by current standards, and final picture quality has a few problems, but on the whole it acquits itself reasonably well. The only question is how will it measures up to its recent competitors. 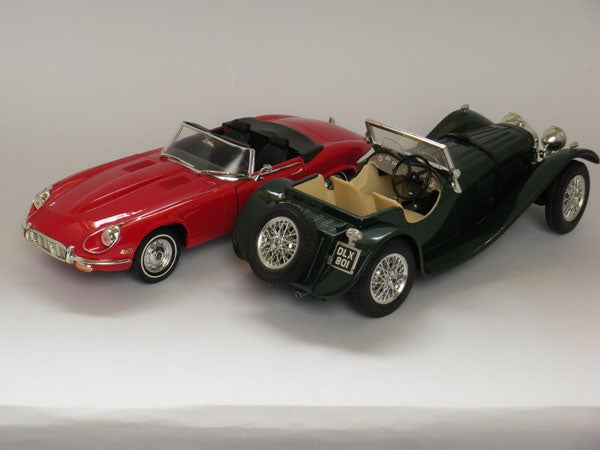 This is a full-frame image at the minimum sensitivity of 64 ISO. 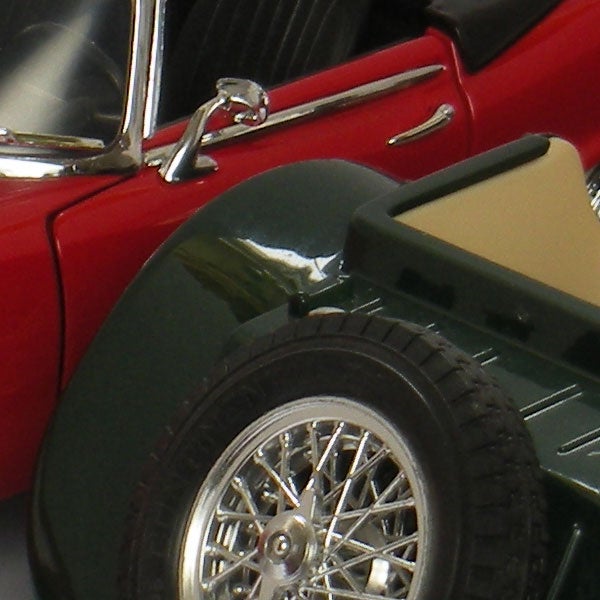 There are some signs of image noise even at 64 ISO. 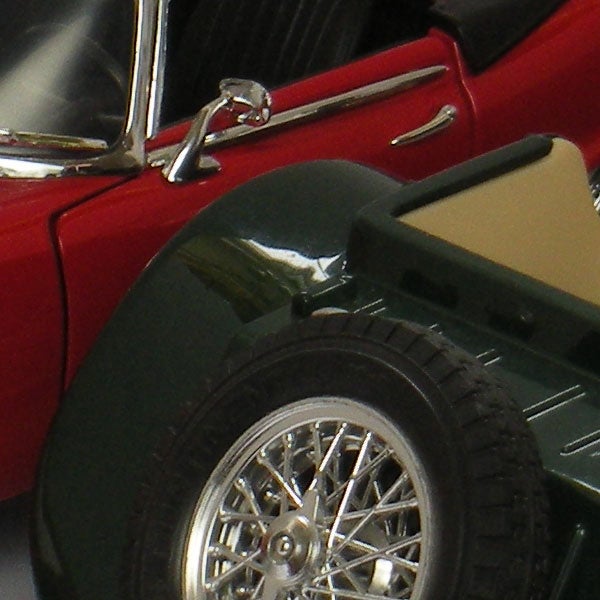 Slightly more noise in the red channel at 100 ISO. 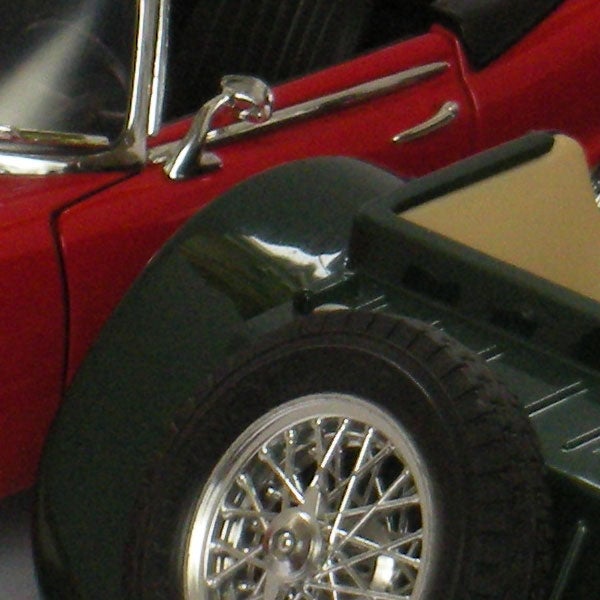 Some detail is starting to fade at 200 ISO. 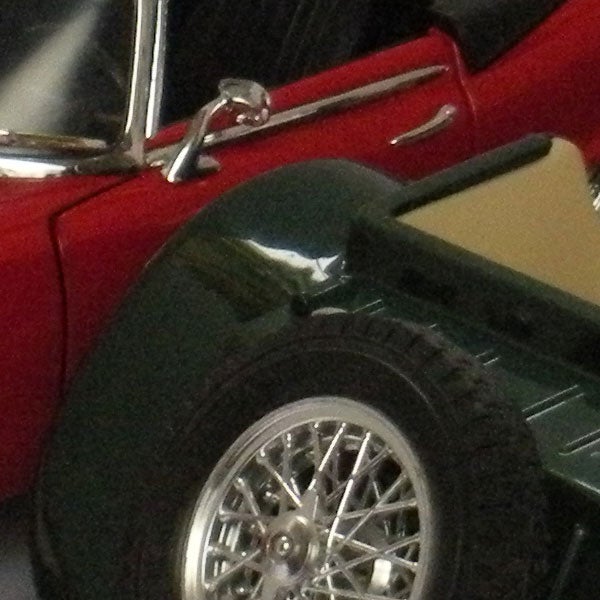 There is a notable reduction in image quality at 400 ISO. 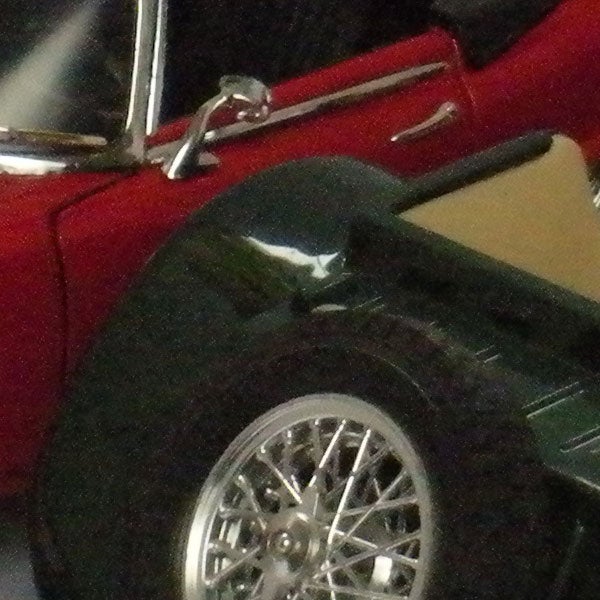 Image noise is much worse at 800 ISO, with almost no fine detail left. 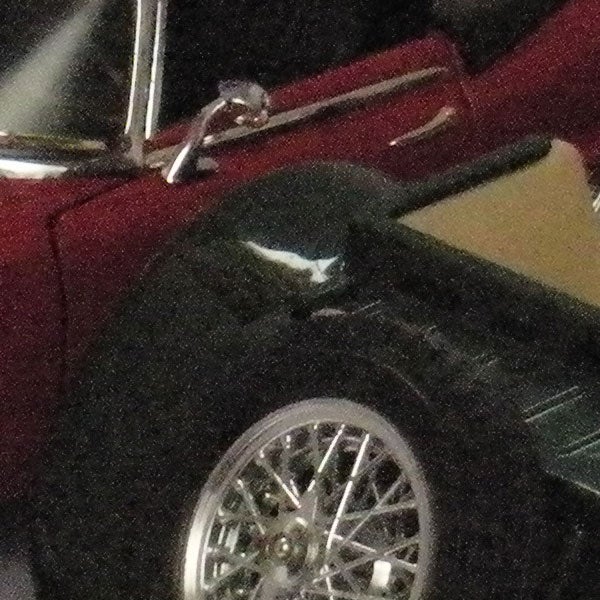 At 1600 ISO colour balance is way off and image noise is everywhere. 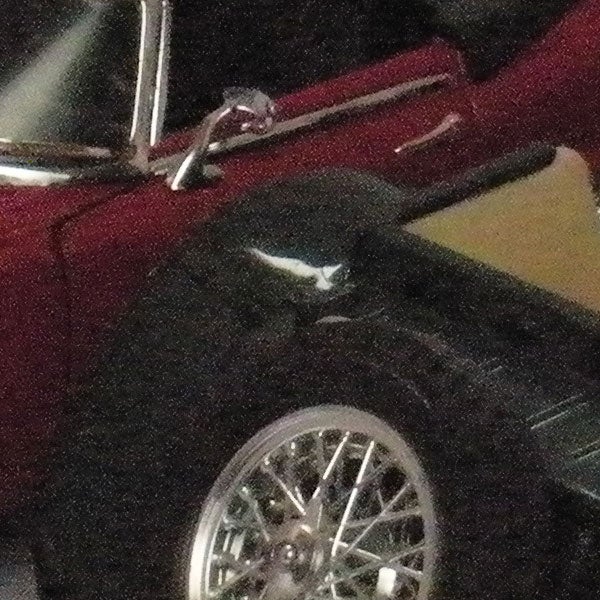 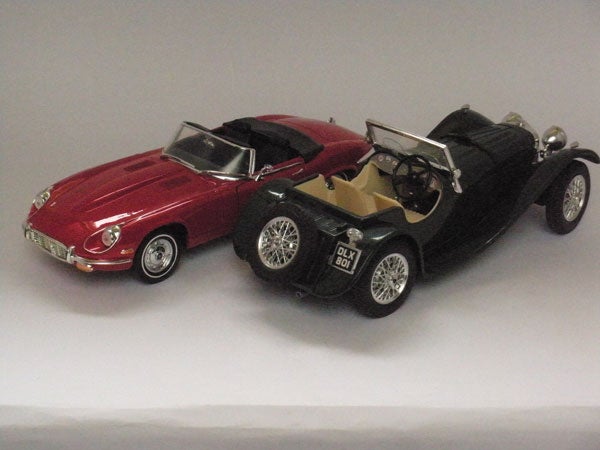 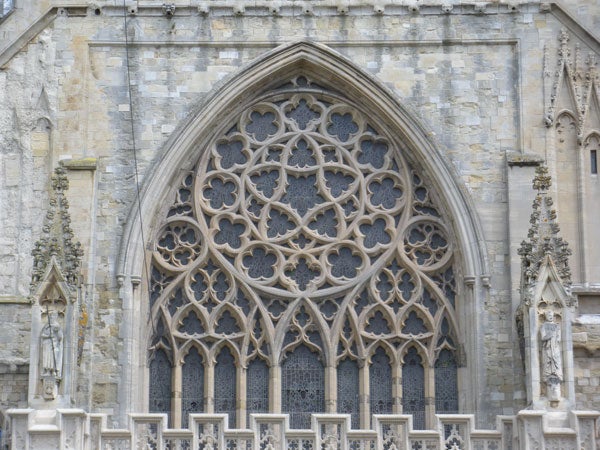 The level of detail could be better. The lens is a bit soft and blurs out the finer points. 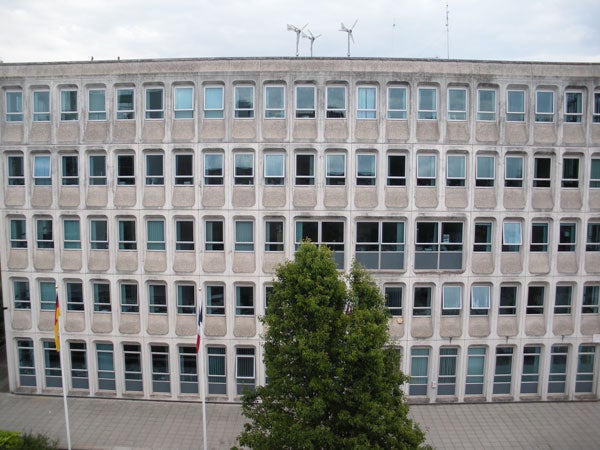 The lens also produces a lot of distortion at wide angle. 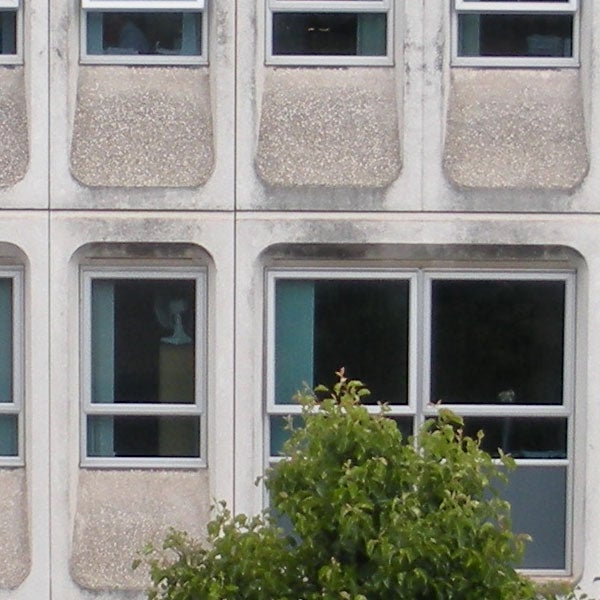 Centre sharpness is not as good as some competitor models. 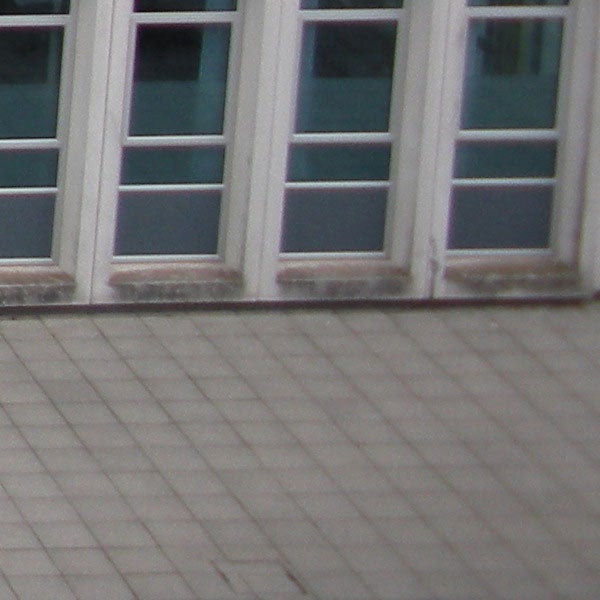 The corners of the frame are very blurred. 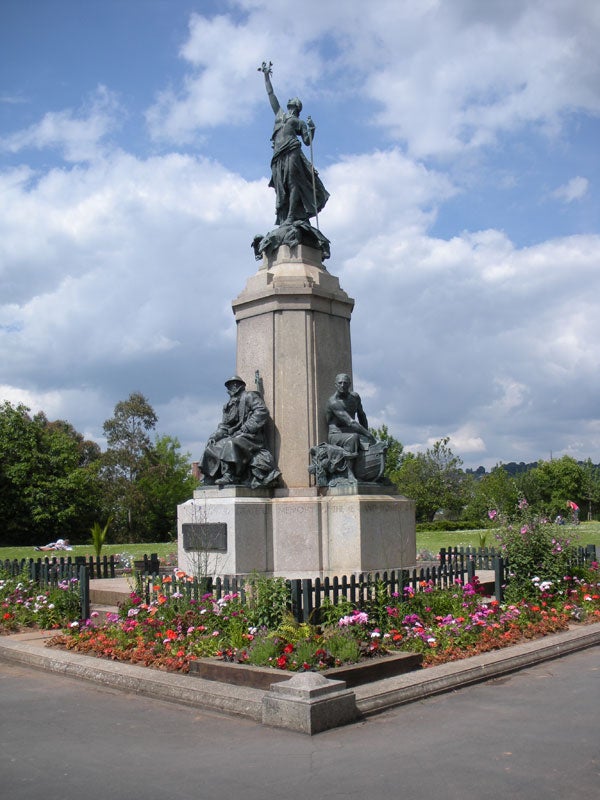 The wide angle is equivalent to 36mm. In good light the S550 produces excellent pictures. 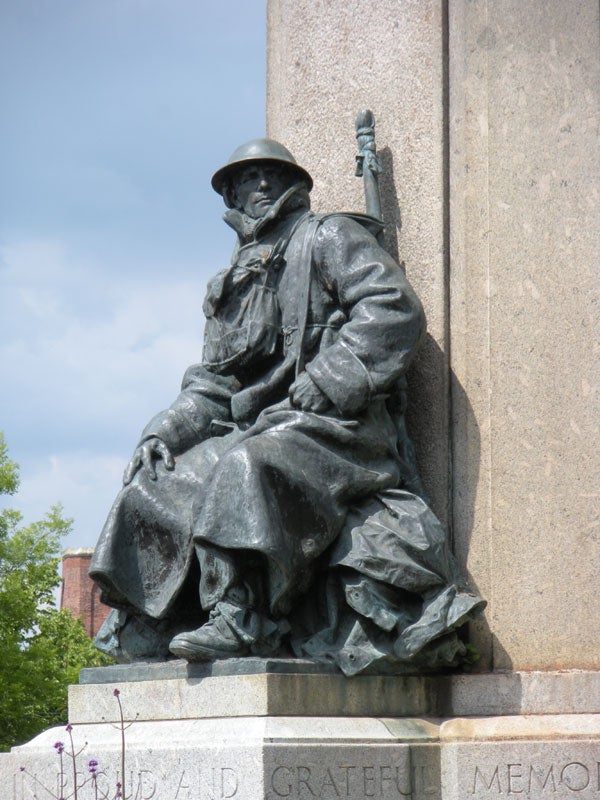 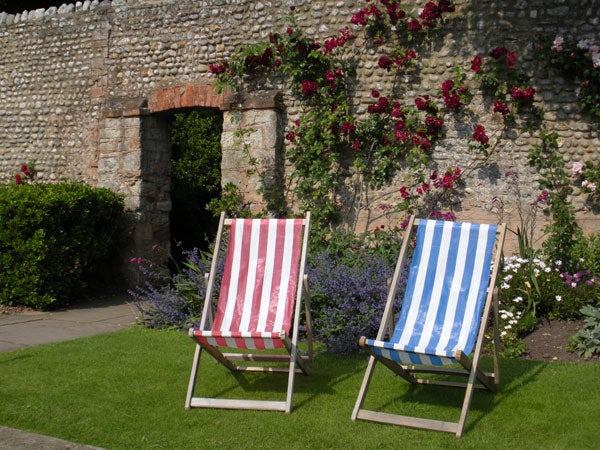 Colour reproduction is pretty much perfect. 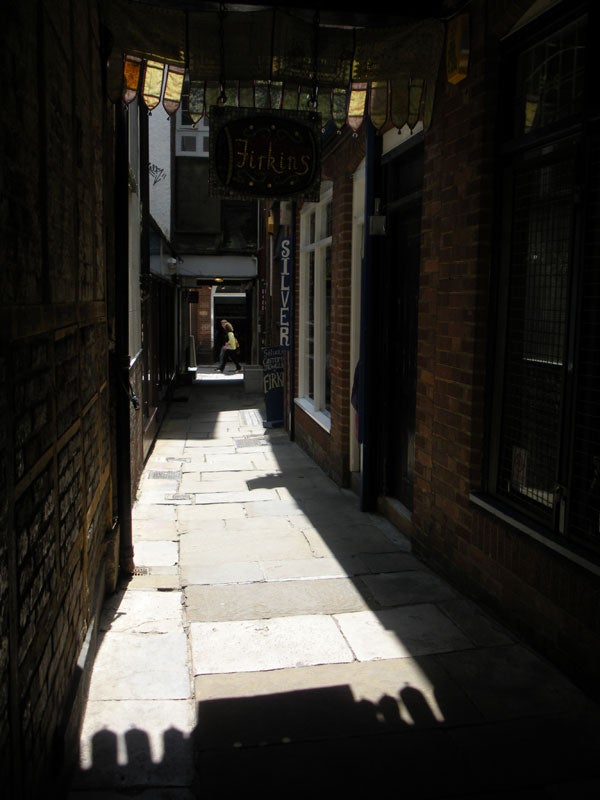 The exposure metering strikes a good balance between highlight and shadow detail. 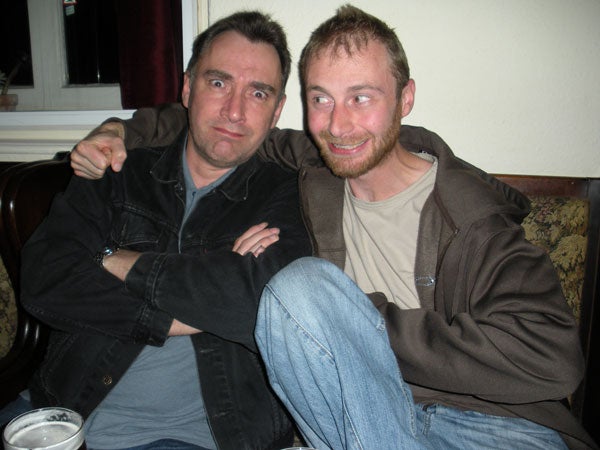 The flash is a bit weak, and doesn’t quite cover the corners of the frame, but exposure is very good.