In recent months Nikon has been rejuvenating its compact camera range, some parts of which had been looking a bit stale, with some interesting and adventurous new models. Perhaps the kindest thing I can say about them is that some have been more successful than others. For example the CoolPix P5000 that I reviewed last month is a good mid-range enthusiasts camera that should compete well with Canon’s A-series. Others, such as the CoolPix S10 don’t really fit into the market anywhere, and also have some serious technical issues to boot. Nikon already has some very good budget and high-end compacts, such as the CoolPix L6 and P4, but one area where it has been sorely lacking is in the ultra-compact market, where cameras such as Canon’s popular Digital Ixus range and Casio’s Exilim models compete. It’s probably no surprise to anyone then that one of the new models is the S500, an extremely sleek and stylish ultra compact launched in February. 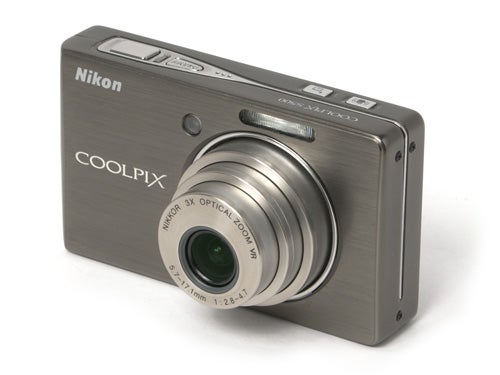 When looking for competing models with which to compare the S500 I didn’t have to look very far. It is so similar to the Canon Digital Ixus 70 that they could have been twins separated at birth. Announced within two days of each other, both are 7.1-megapixel ultra-compacts with 1/2.5-in sensors, 3x zoom, 35-105mm-equivalent, f/2.8 lenses and 2.5-in, 230k anti-glare LCD monitors. In appearance as well the two cameras are very similar. Both are very rectangular in shape, and only a couple of millimetres separate them in size. The Nikon is slightly longer (88 x 51 x 22 mm), while the Canon is marginally thinner (85.9 x 53.5 x 19.4). At 135g dry the Nikon is the heavier of the two by 10g.


There’s also little to separate the two cameras on price. The Nikon S500 is currently retailing at around £170, while the Canon Ixus 70 is available for about £163, which with the variation in prices between various retailers is a close as makes no odds. 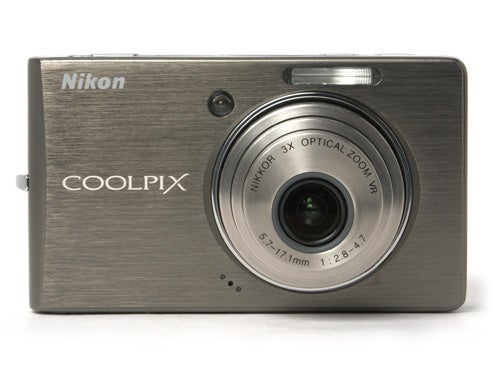 In terms of design and build quality the S500 is a match for the Canon too, with a strong all-metal body available in either silver or a sort of dark metallic bronze colour, both finished in a brushed metal texture. The control layout looks fairly conventional, but in fact the D-pad also rotates for fast scrolling through menus and recorded images, a feature that you’ll either love or hate. I have to admit I’m not too keen on it. The dial is very loose and turns far too freely, and it is very easy to accidentally change settings unintentionally. The conventional D-pad works perfectly well, so I don’t see the point of changing it to make it worse.

So how is one to choose between such similar cameras? Well for starters the S500 has one very useful feature that the Ixus 70 lacks: optical image stabilisation. It is equipped with Nikon’s own moving-lens anti-shake system that provides a two-stop advantage when shooting hand-held in low light situations. It is the smallest camera I’ve seen with such technology. It also has a maximum ISO setting of 2000, trumping the Canon’s ISO 1600, but as we’ll see this isn’t that much of an advantage. As with most modern compacts the S500 also features a face-detection portrait mode, which is less useful but can still provide an advantage under some circumstances. 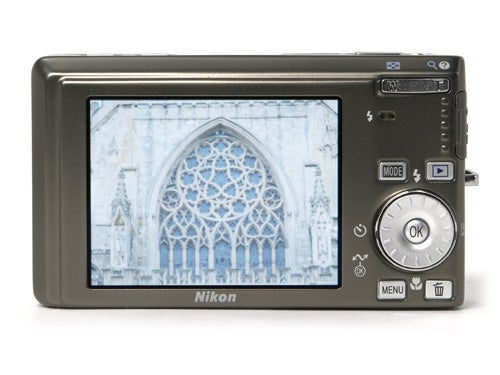 As a pocket snapshot camera the S500 isn’t overburdened with other features, but it does sport the usual selection of scene modes, including portrait, landscape, sports, night portrait etc. It has 15 in all, but there are no real surprises. As well as these, it has a program auto mode in which menu options such as Nikon’s useful Best Shot Selector are available. This is a good mode for beginners, since it warns you if a shot is blurred and asks if you want to keep it. There aren’t many more options on the menu, apart from a limited range of pre-set colour modes, AF area selection, white balance image quality and drive mode. 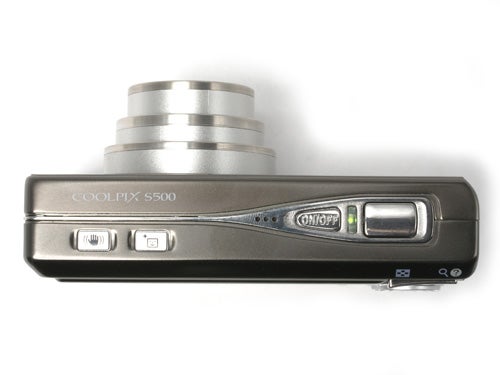 There is one “feature” of the S500 that I absolutely hate. On the top panel is a button labelled with the ‘Shaky hand’ icon that seems to have become the standard for Anti-shake systems, although in this case the Skull-&-crossbones symbol for poison might have been more appropriate. Pressing it, unsurprisingly, enters the Anti-shake mode, but this should be avoided at all costs. It activates the optical image stabilisation system, which is fine, and switches on the BSS mode, which is also good, but it also over-rides any manual ISO setting, instead setting it to the maximum of 2000, which is an utterly terrible idea. The S500 suffers from very bad image noise at 2000 ISO, so it’s like having a button on the camera to automatically ruin all your pictures. Since the image stabilisation system can be switched on permanently in the set-up menu and used at any ISO setting, I really don’t see the point of this button at all.

General performance is also somewhat questionable, but it does have a couple of good points. It starts up quickly in just under two seconds, although it takes about three seconds to shut down again. It has a very strange continuous shooting mode, in which it focuses, shoots three frames in about four seconds, then pauses, focuses again and shoots another three frames, and so on. Like most recent Nikon compacts focusing is reliable, but quite slow even in bright daylight, since it seems to hunt from one extreme to the other with every attempt, and it gets even slower in low light. The camera has an AF assist lamp, but it has very limited range and doesn’t seem to help much. I found that it often took two or three tries to focus even in restaurant lighting. 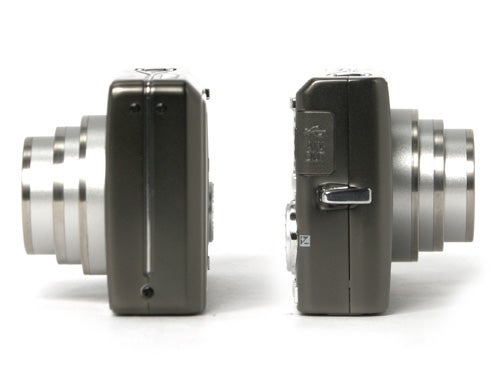 Picture quality is, on the whole, not bad. The Nikkor lens produces pretty good centre sharpness, and this only really drops off in the extreme corners at wide angle. Spherical distortion at wide angle is noticeable, but no more so than with most 3x zoom compacts. Although the sensor produces good detail and dynamic range considering its small size, I did notice that the light meter tended to under-expose by about a stop, which caused heavy shadows and muted colours. Image compression is also a problem. For a 7MP camera, the average of 2MP per image at maximum quality is very small. The image noise reduction system is also very heavy-handed at 200 ISO and above, seriously reducing image quality. Despite this, image noise is a major problem at 800 ISO and above. 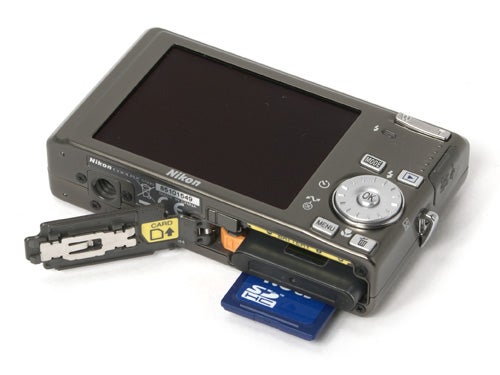 All things considered, I’d have to say that if the CoolPix S500 is Nikon’s attempt to beat Canon at the ultra-compact game then it isn’t entirely successful. While the inclusion of optical image stabilisation in such a small camera is an achievement, and the build quality and appearance of the camera are excellent, the image noise problems, slow focusing and poor low-light performance are major handicaps. If I was looking to buy a 7MP ultra-compact, I don’t think it would be this one. 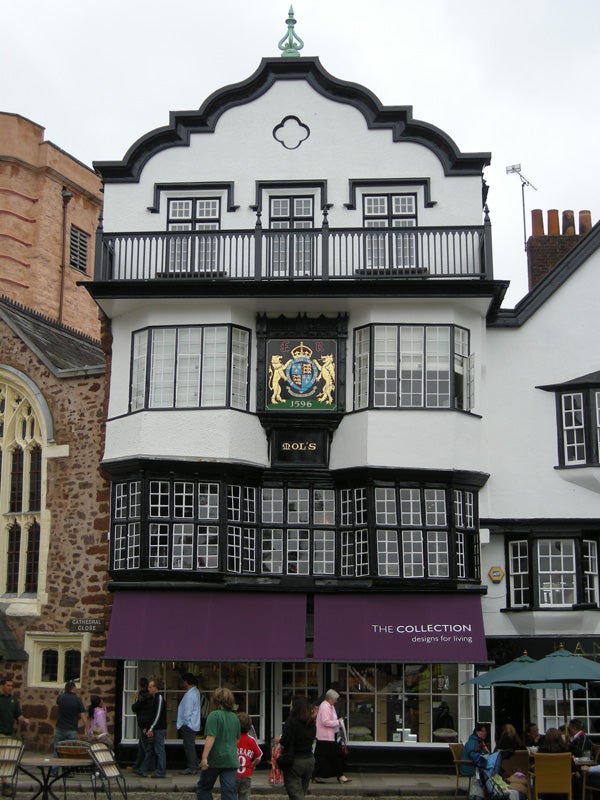 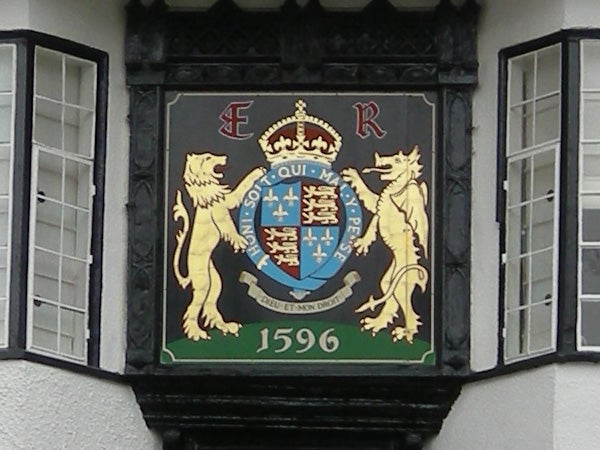 At the minimum 50 ISO the picture quality is very good. 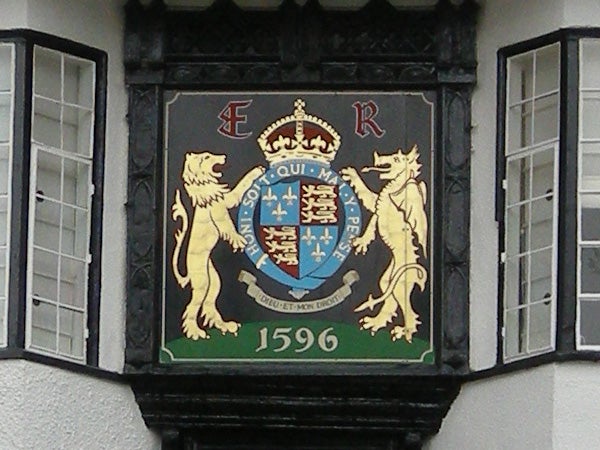 Likewise at 100 ISO there are no problems. 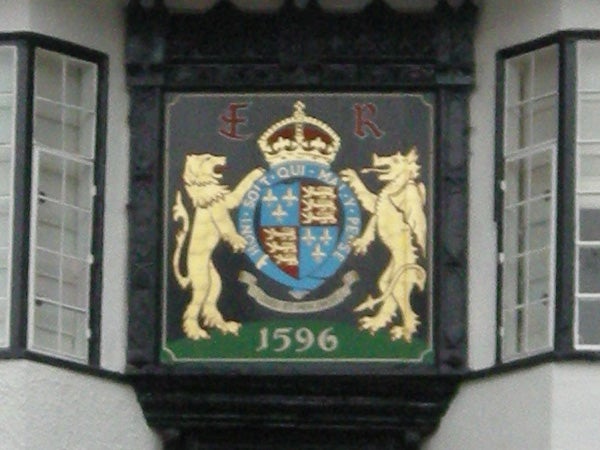 At 200 ISO however there is a sudden reduction in image quality. 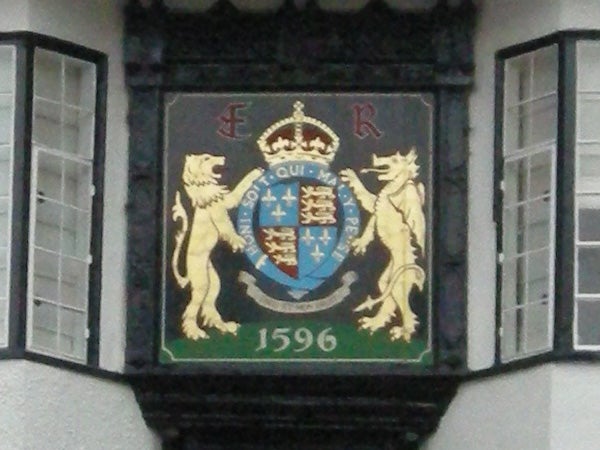 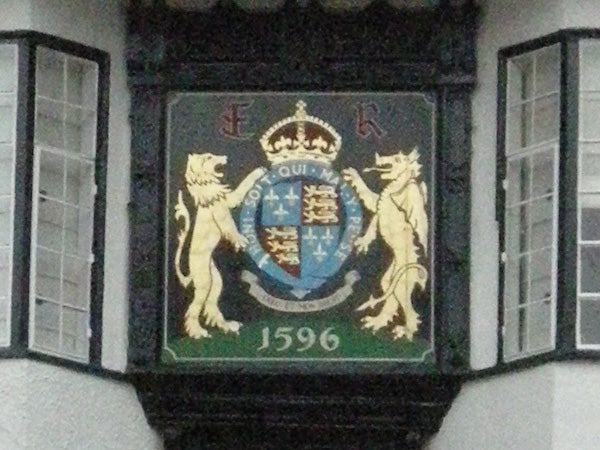 At 800 ISO there is image noise across the whole frame. 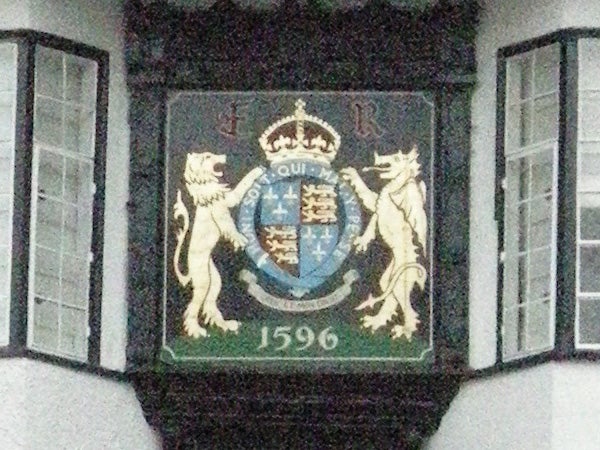 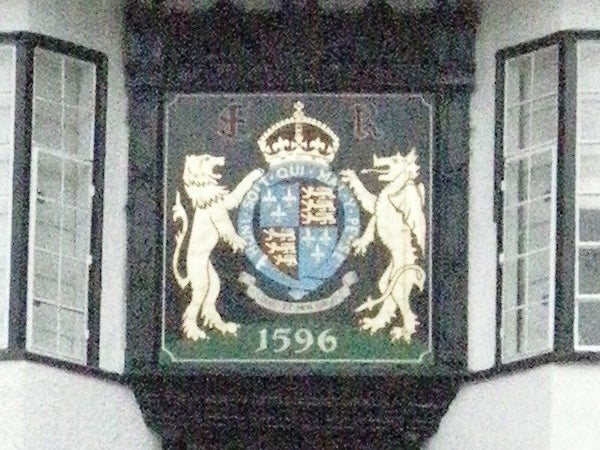 At the maximum 2000 ISO the image is all but useless. 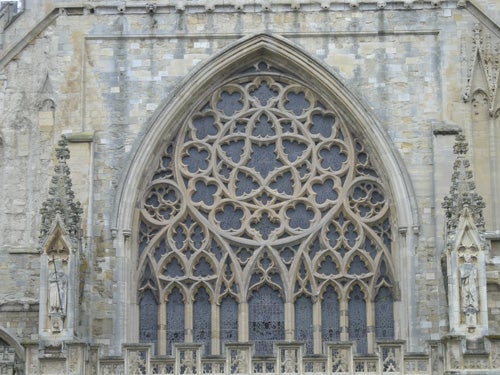 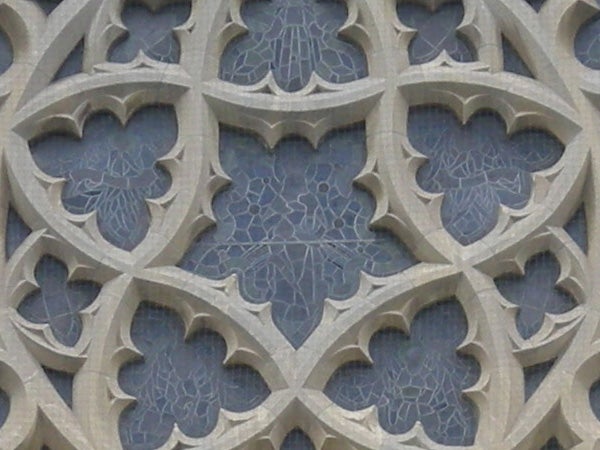 This was taken on a dull day, but the level of detail is only about average for a 7MP camera. 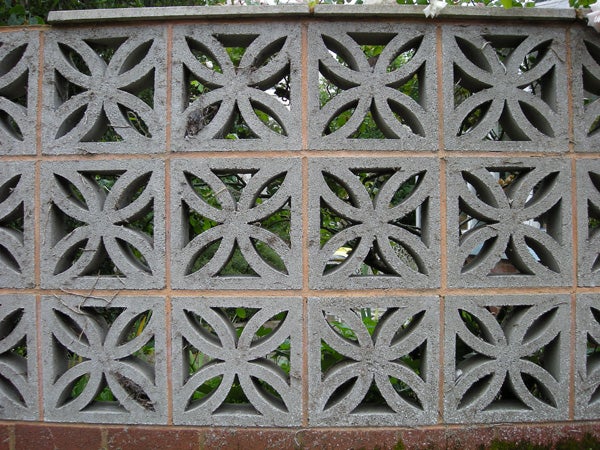 The Nikkor lens produces some distortion at wide angle, but not too much. 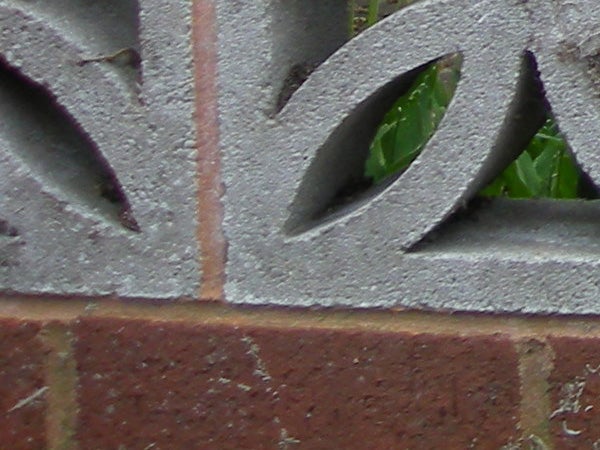 This corner crop from the above image shows the level of corner detail. It’s about average for a 3x zoom compact. 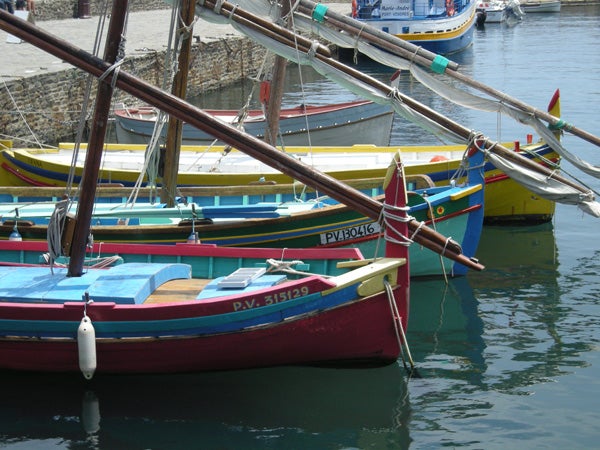 Colour rendition is slightly muted due to under-exposure. 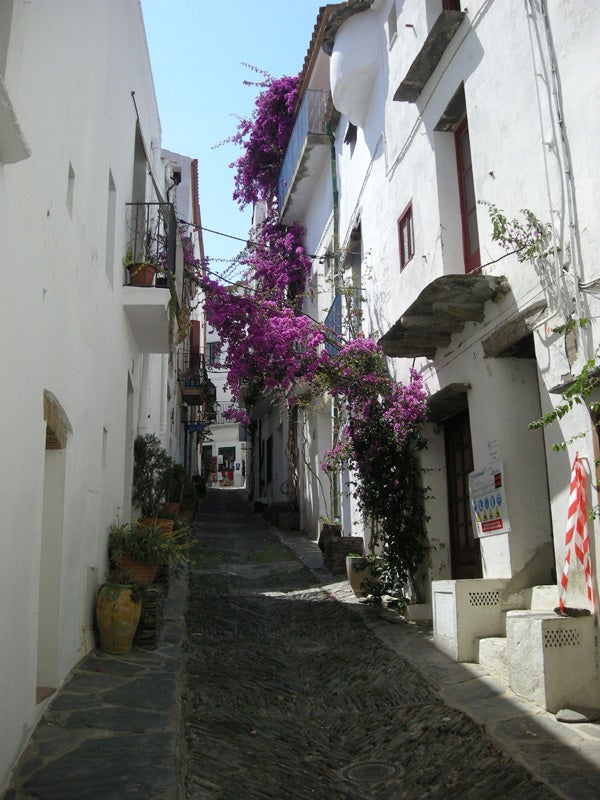 Contrast and dynamic range are pretty good though.