Available in a pair of loud colours, and featuring an eye-catching sliding shutter cover design, the Nikon COOLPIX S100 is certainly pitched at the more style conscious. That isn’t to say, however, that substance has gone by the wayside – the S100 in fact features several elements of is specification that are worthy of more serious shooters.

In keeping with the sleek first impression of the S100, the model features a large touch screen occupying most of the rear of the camera. The screen itself measures in at 3.5in and is of the high-resolution and cutting edge OLED variety, with a resolution of 819k-dot it promises a bright resolution and accurate colour rendition. The screen also features capacitive technology meaning it supports multi-touch interaction. 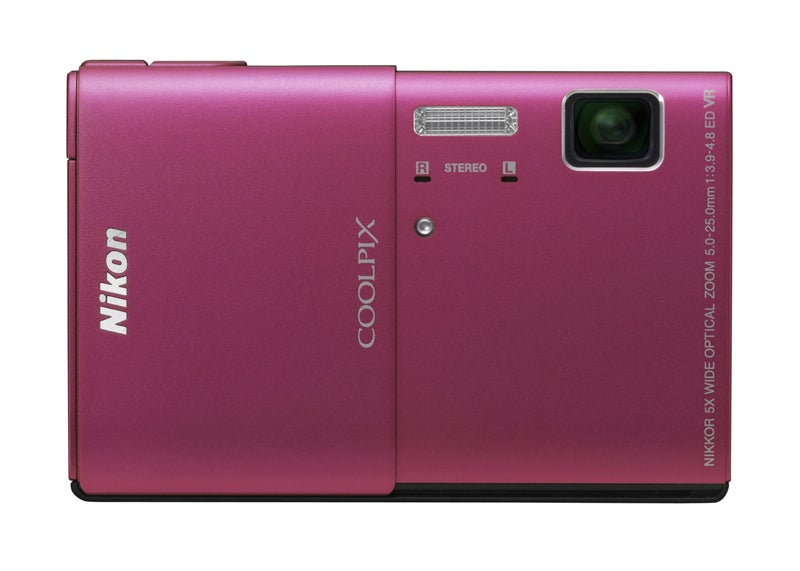 The core of the COOLPIX S100 houses a 16MP back illuminated CMOS sensor, a technology which, Nikon claims, increases the amount of light each pixel receives and therefore reduces image noise. The sensor itself is supported with Nikon’s EXPEED C2 image processor, which helps with image processing and general performance. Despite featuring a slim line sliding cover design, the Nikon COOLPIX S100 still houses a 5x optical zoom covering a focal distance of 28 – 140mm in equivalent terms. The lens itself is supported by a Hybrid VR system, combining Lens Shift and Electronic Vibration Reduction, to ensure sharp images, while the model’s ISO range extends up to ISO 3200 for low light work.

The usual range of shooting modes feature on the Nikon COOLPIX S100 – an ‘Easy Auto’ mode is present to take care of the majority of shooting controls for you should you so wish, while those looking for further control over settings only have the aforementioned scene modes to choose from. Interestingly, the S100 also now features a range of ‘dedicated light modes’ optimised for good results in difficult lighting conditions, while a new 3D still image capture mode also features.

As mentioned, the COOLPIX S100 features a sliding shutter cover that also serves as the models power control. As a result, the compact has a sleek, almost cigarette box feel to it and will no doubt sit well in the pocket. The rear of the camera is occupied in its entirety by the S100’s impressive 3.5in OLED LCD screen, and as a result the only button adoring the body is the shutter release on the top of the camera – certainly one for those of a minimalist bent.

The model’s touchscreen performs well in use, no doubt assisted by the option of multi-touch functionality. Menus are easily negotiated and several usability tweaks, such as touch shutter release and pinch zoom, will no doubt be familiar to those who have become accustomed to shooting with their touch screen smart phones. The camera’s focus system is also impressive, with the aforementioned touch screen offering touch to focus and pinch zoom functionality that aids this performance. One slight curiosity with regards to the performance in use is the camera’s white balance – shifts are noticeable between warm and cool temperatures when moving the focal point through the scene, although having said that the right results are normally met once the shutter button is released. Image quality is generally reliable. Colours display a pleasingly natural palette, one that is aided by reliable white balance at the point of capture. However, noise can prove a touch problematic on higher ISO settings, hampering fine detail, while there is a slight softening towards the edge of the frame throughout the focal range. Exposure is generally reliable, with the COOLPIX S100 capturing an even tonal range with a lack of clipping at either highlight or shadow, therefore giving photographers room to edit images in post production, should they so require.

It’s clear from the first time you lay your hands on the COOLPIX S100 that it’s a striking compact designed with the stylish compact user in mind. The good news is that it’s not solely style over substance, as the S100 has a specification to match its looks and delivers good results. The 3.5in OLED touch screen is impressive and facilitates some excellent video capture, while the multi-touch functionality is a welcome addition. The price tag, however, is certainly one stumbling block and, whilst images are generally good, there are some issues that one wouldn’t expect from a compact of this price tag. With regards to a stylish, slime line compact, the S100 is certainly one to consider