Nikon has hit all the necessary specs with the P100, as it offers an impressive 26x optical zoom as well as Full HD movies. The specs don’t always translate into decent image quality though, and with a bridge camera this is all the more important. It’s a rarity that a camera capable of magnifying an object so closely can maintain any form of decent image quality at the narrow end of the zoom, making the gigantic figures pointless. The P100 has a few tricks up it’s sleeve to try and counteract this though, giving it a genuine chance of delivering on the promises of the specsheet. 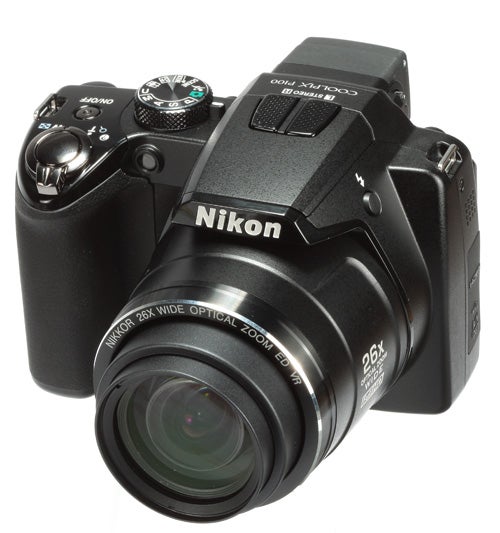 Nikon has sensibly added sensor-shift stabilisation to counteract vibration at the top end of the zoom, as well as the ability to go as far as ISO 3200. Both of these factors should give the P100 an amount assistance when the user wants to hit the dizzy heights of the 26x magnification, making it far easier to focus accurately.


For low and high angle shooting the 3” LCD screen has a vari-angle hinge, which is able to swing through 90 degrees. Once at a right angle from the body the screen can then tilt through a further 180 degrees, making the likes of macro photography and shooting over the heads of a crowd far easier. To aid with the low light capabilities the P100 also has backlit sensor, which means the camera needs far less light to expose an image. This should, in theory at least, make the appearance of noise far less obvious. The 1080p video also adds an element of versatility for anyone wanting to shoot movie clips.

Being a superzoom, or bridge camera, means the majority of the Nikon P100’s design is dictated by the large zoom barrel. There’s an element of DSLR about the form the P100, with a right hand grip and the controls being split evenly between the rear and top of the camera. The mode dial is reminiscent of a removable lens camera as well, which is by no means a surprise thanks to Nikon’s obvious pedigree in that field. 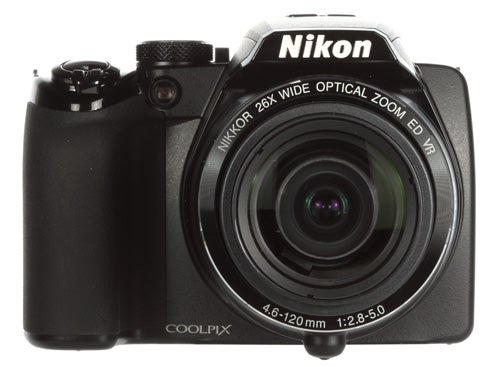 The dial is superbly sturdy and well built, moving with a satisfying amount of resistance and locating into each position cleanly. The zoom switch, on the other hand, feels light and somewhat flimsy. With such a hefty amount of magnification to temper, it’s surprising Nikon didn’t offer something sturdier. Unlike the majority of its rivals, the P100 also has an option dial to alter the likes of the shutter speed and aperture when in the relevant mode. This makes the settings far quicker to alter and the control much more natural for anyone with even a passing familiarity with a DSLR’s controls.


All round the build quality is generally impressive, even if a few of the controls are a touch flimsy. The body feels strong and sturdy, even when the hinged LCD is fully extended. Having a rotatable screen is certainly useful for those odd occasions when a more awkward angle is required to be shot from, such as close to the ground. As it’s tricky to see the screen from any other angle than straight on, being able to twist it into a viewable position is necessary rather than a novelty feature. Thankfully it’s of high enough definition to make it simple to frame up and verify the images are sharp. 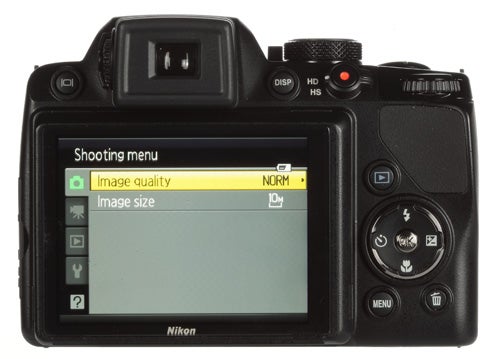 One element woefully underpowered through no fault of its own is the stabilisation. Trying to keep a 26x zoom on the straight and narrow is nigh on impossible anyway, and the sensor shift does little to remedy this. In order to have any chance to keep the images sharp as much light as possible needs to be allowed into the lens, which having a 26-678mm lens made particularly difficult. Switching to the EVF and pressing the camera up to the eye makes this slightly easier, or alternatively a tripod can be used. The 1080p HD movie mode allows for the zoom to be employed which, unsurprisingly, once again puts the focus under undue pressure. Annoyingly the P100 also takes far too long to start up, whirring and straining for a few seconds before eventually becoming active.

Much like the majority of bridge cameras the Nikon P100 has two distinct areas of performance, being at the wide end of the zoom and the narrow. At the wide end optimum light is absorbed, so shots should be well exposed and sharp. In actuality the exposure tends to leave the brighter areas without the expected level of detail, favouring the darker segments far more. 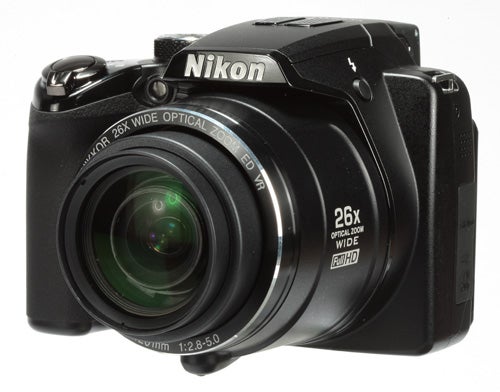 At the top end of the zoom the results are quite similar, although given a few more seconds in automatic the levels can be far more balanced, curiously. The one area to cause real concern is the colour quality, which comes out looking unrealistic. This may be to hide areas of noise, but the end product looks quite cartoony and lacking in graduation. Reds especially look almost fluorescent in places, giving a false level of vividness. In low light the noise reduction serves a far better purpose, making the higher ISO settings usable if a touch soft. 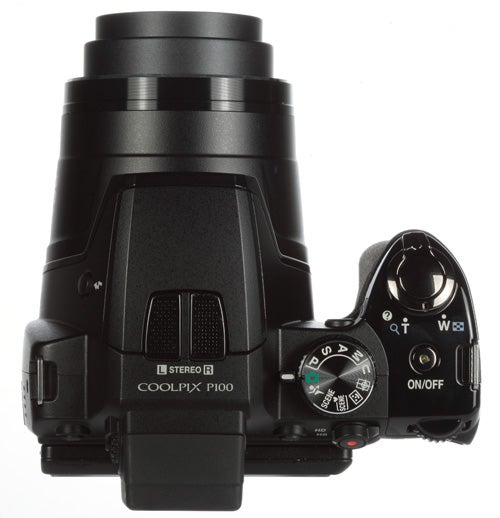 The focussing, spurred on by the huge zoom, does take a while to lock on and can be a touch temperamental. There are occasions when the sharpness is a touch too soft, although this may be due to the lack of detail in brighter areas making the camera more likely to produce haze-heavy photos.

The Nikon P100 doesn’t quite deliver on the promises of the specs, but at least manages to produce some sharp images. The colour is the main letdown, as even when altered under manual controls it appears unrealistic. 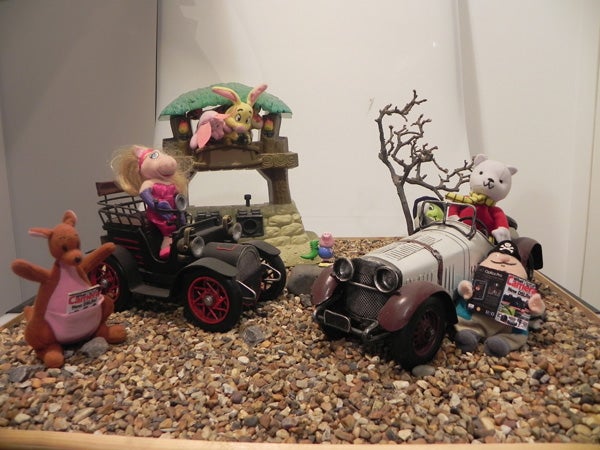 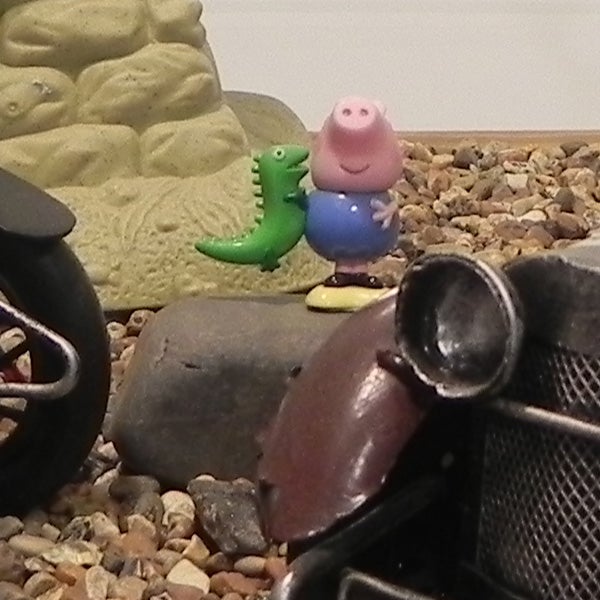 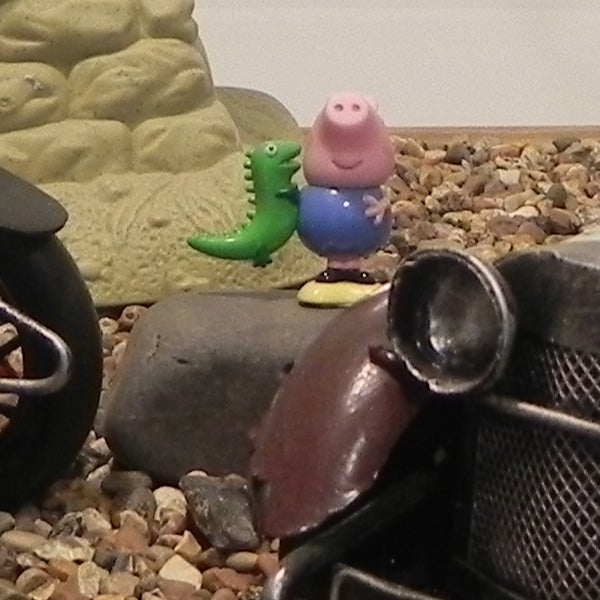 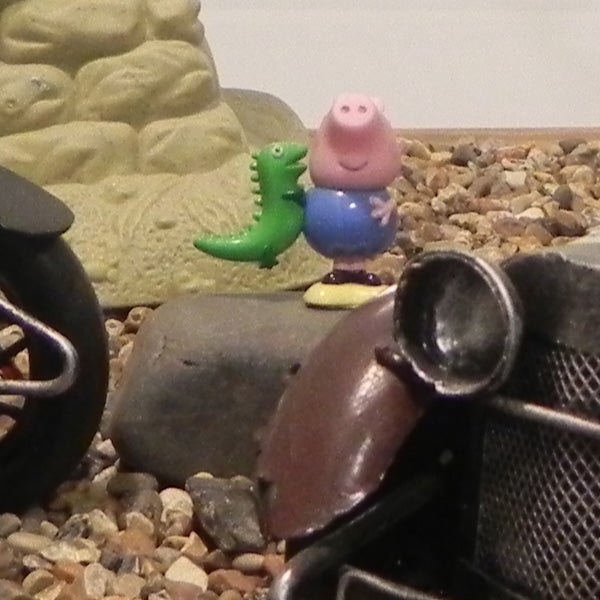 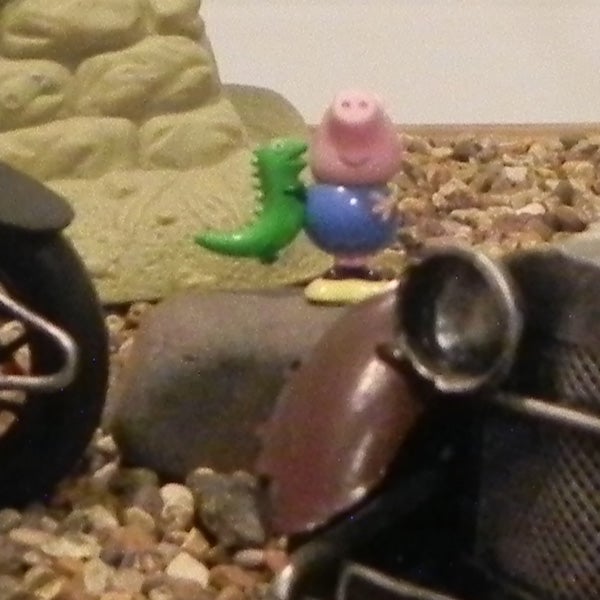 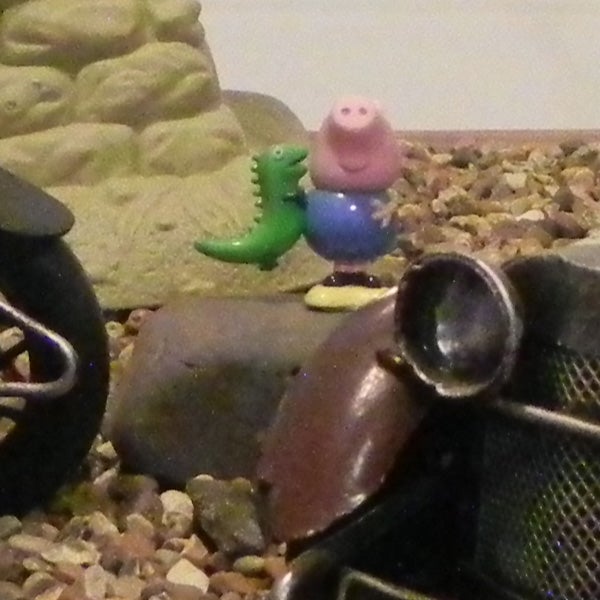 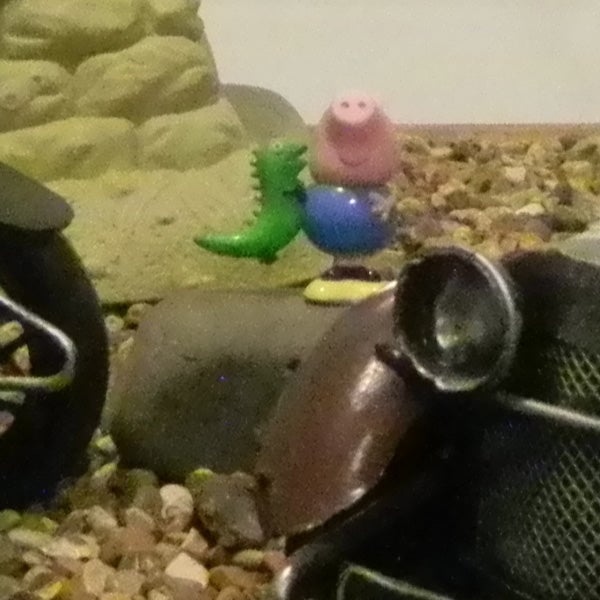 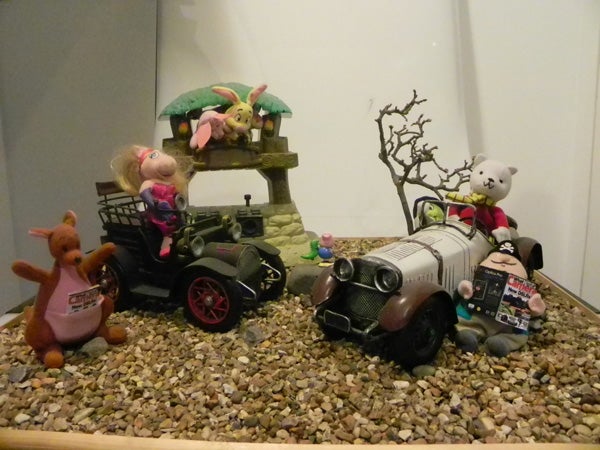 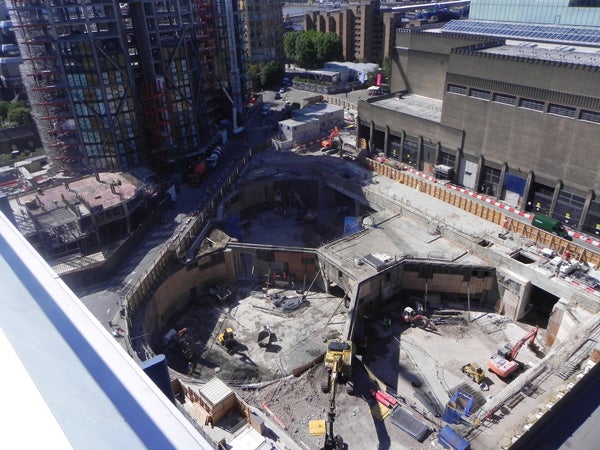 The wide angle end is equivalent to 26mm. 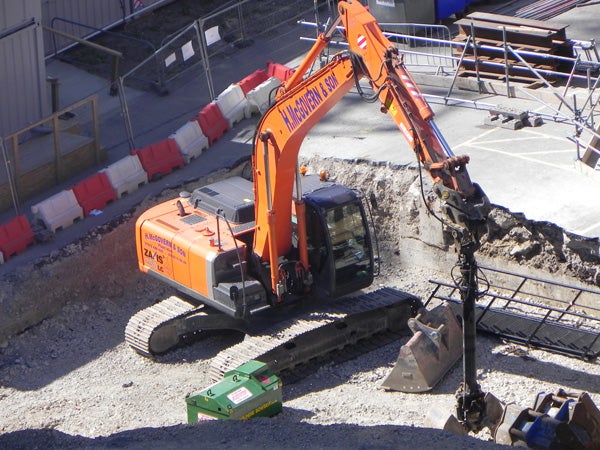 The telephoto end is equivalent to 678mm 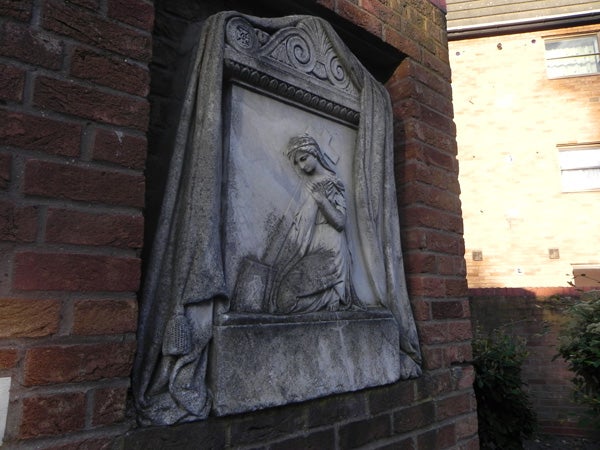 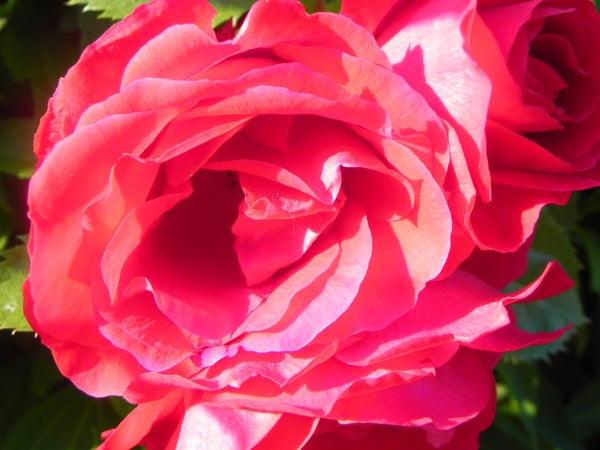