Last week I reviewed the Fujifilm FinePix A700, a camera so simple I had a hard time finding enough to write about. This week I’ve got another that is, if anything, even simpler. I’d better review another DSLR again soon or I’m going to forget how to work a real camera. 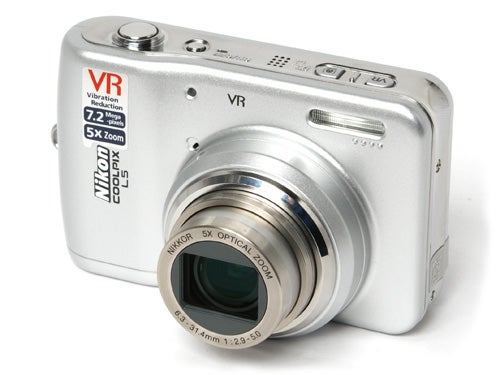 The Nikon CoolPix L5 was launched in the UK is September last year, along with the slightly more sophisticated L6, as the top end of Nikon’s CoolPix lifestyle-oriented L series of simple pocket compacts. It has an external design that bears a superficial resemblance to the budget priced 4-megapixel CoolPix L4, but the similarity is no more than skin deep. The L5 offers the advantages of a 7.2-megapixel sensor, 5x optical zoom lens, Nikon’s VR optical image stabilisation, and the current must-have gimmick, face detection technology. It’s also a lot more expensive than the L4, since it is currently available for around £152. However compared to other similarly-specified large-zoom point-and-shoot compacts such as the Kodak EasyShare C875 (£140), Olympus FE-240 (£170), Ricoh Caplio R5 (£200) and Panasonic Lumix DMC-FX07 (£220), the L5 is quite reasonably priced.


Despite having a couple of technological tricks up its sleeve, the CoolPix L5 is a very simple camera to use, designed for those people who want no bells and whistles, where all they have to do to take a picture is point it and press a button. Measuring 97 x 61 x 45mm and weighing about 220g including standard alkaline batteries it is quite large and surprisingly heavy for a compact, thanks mainly to the rather bulky 6.3 – 31.4mm (38 – 190mm equiv.) lens and the fact that it is powered by two AA cells. The lens does not retract fully into the camera body, making the camera an awkward shape to fit comfortably in your pocket. The extra size does mean that it is quite an easy camera to hold, with well-spaced controls and plenty of room to grip it both front and rear, however the slippery gloss finish and lack of any real handgrip mean that you have to keep a tight hold on it. 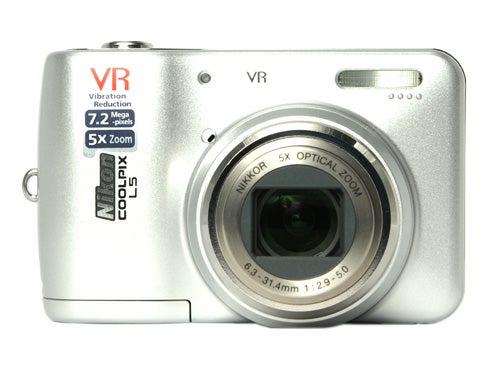 The body itself, although made largely of plastic, is strong and well constructed, and that shiny finish does help it resist marks and scratches. The controls are solidly mounted, and the battery hatch has a locking latch so it won’t come open in your pocket. This is just as well, since the batteries have no independent latch and are apt to fall out when you open it up to change the memory card.

The LCD monitor is clear and bright, with an effective anti-glare coating so it’s usable even in bright sunlight, if you can find any. With only 115K pixels it’s not particularly sharp though, and it has a fairly low refresh rate, so it can appear slow and jerky if you’re moving the camera around to follow action. 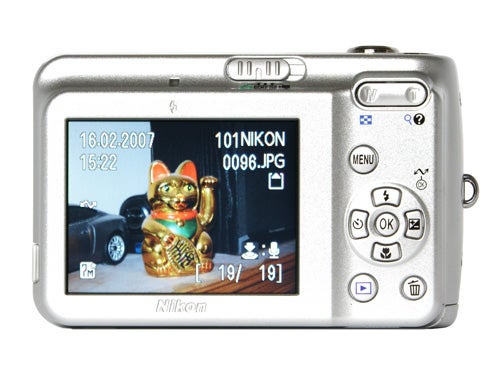 Overall performance is unimpressive. The camera takes a slow four seconds to power up to the point where it’s ready to shoot, and over 3 seconds to shut down again as the lens retracts quite slowly. The AF system is about average, taking roughly a second to lock on in most lighting conditions, although the lack of an AF illuminator limits its usefulness in low light conditions.


In continuous mode it can shoot at around one frame every one and a half seconds, which isn’t too bad for a low-cost camera, and it can keep this rate up until the memory card is full. At maximum resolution and image quality the L5 produces JPEG files that average around 2.2MB, which is very small for a 7MP camera, but does mean that a 1GB SD card is enough for approximately 282 pictures or 11 minutes 36 seconds of video footage at the highest quality setting. 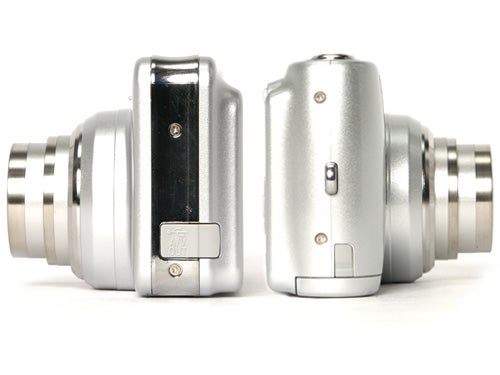 The built-in flash is nice and powerful, with a maximum range of 5.5m at wide angle and excellent frame coverage, but it does take a long time to charge between shots, frequently over eight seconds.


As I mentioned, the L5 is very short on features. It has no manual ISO setting, just an automatic adjustment with a maximum of ISO 400. Unfortunately the maximum setting is very noisy, and since there’s no way to prevent the camera from selecting it, this does mean that some low-light photos are of very poor quality.

There are no manual exposure settings of course, but the L5 does have 15 scene program settings including all the standards such as portrait, landscape, sports, night scene, beach/snow, dusk/dawn, sunset and more. There are no surprises, but there are enough choices to cope with most picture taking situations. 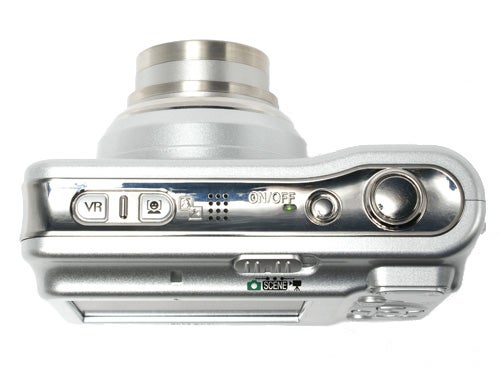 Colour adjustment is limited to the basic standard settings as well, with a high-saturation vivid mode, sepia, monochrome and the blue-tinted cyanotype option. White balance and flash modes also cover all of the usual bases, as listed in the feature table on page 4. There is a manual white balance pre-set option.


The only two unusual features are the VR (Vibration Reduction) image stabilisation and the face detection system. I have to say I was not particularly impressed by the VR. Most optical or CCD-shift IS systems provide around 2 stops of extra stability when shooting at low shutter speeds, but I found that the VR system was very inconsistent, and shots just one stop below the recommended minimum hand-held speed were often blurred. It doesn’t appear to be as effective as similar systems used by Canon or Panasonic.


Face detection is, as I’ve mentioned before, more of a gimmick than a genuinely useful feature. Although the Nikon system is as good as any, it will only recognise faces that are looking directly into the camera, and even then things like large sunglasses, broad-brimmed hats and strong side-lighting can confuse it. It’s really only useful for simple portrait shots, and even then it doesn’t make that much of a difference over standard AF and metering systems. It’s very clever technology to be sure, but it’s certainly not worth paying extra for it. 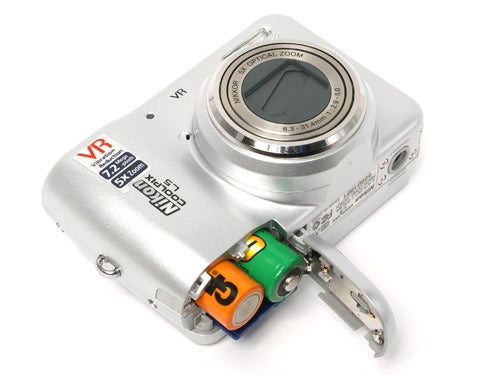 Finally we come to image quality, and here the L5 falls down badly. As I mentioned previously, even at the maximum quality setting it produces very small and highly compressed image files, and this seriously limits the picture quality. Furthermore the lens is not one of Nikon’s best, producing very noticeable barrel distortion at wide angle, with very poor edge and corner sharpness. While colour rendition and exposure were generally accurate, the level of fine detail was much lower than on most 6MP compacts that I’ve tested. One has to wonder what exactly is the point of putting a powerful 7.2 megapixel sensor in a camera it is crippled by poor noise control, high compression and a sub-standard lens?

The Nikon CoolPix L5 is something of a mixed bag. It offers a useful zoom range and resolution, easy handling and simple operation, but the slow performance, bulky appearance and poor image quality are significant disadvantages. There are better cameras available for not much more money.

”There are no ISO test shots for this review, since the CoolPix L5 has no manual ISO control. Some of these pictures can be downloaded full-size. Click on the images as indicated.” 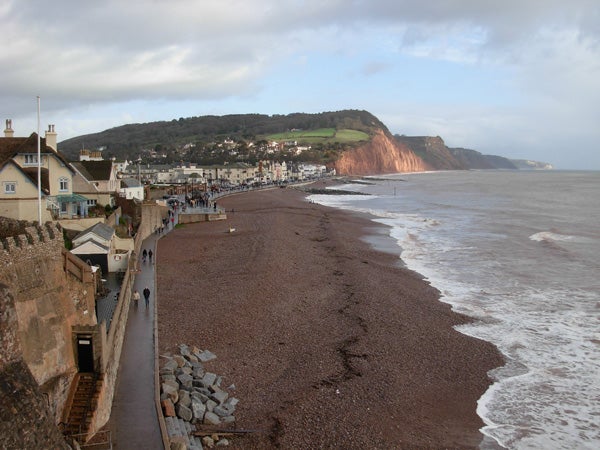 With a wide-angle end equivalent to 38mm, the L5 isn’t much good for panoramic landscapes, but it does have a panorama stitching feature. 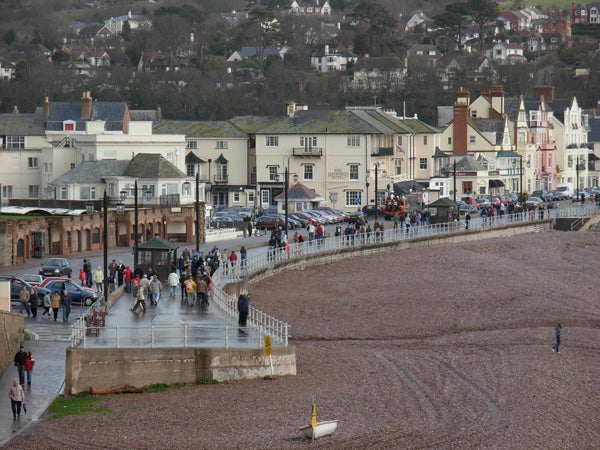 The telephoto end of the 5x optical zoom range is equivalent to 190mm, quite handy for pulling in distant details but not up to superzoom standards. 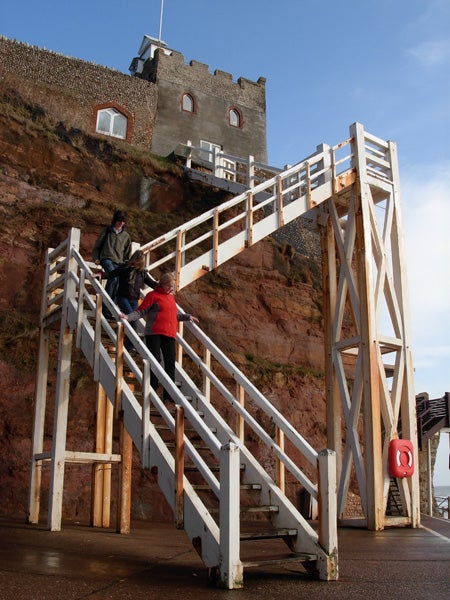 Colour rendition and exposure are good under normal lighting conditions. 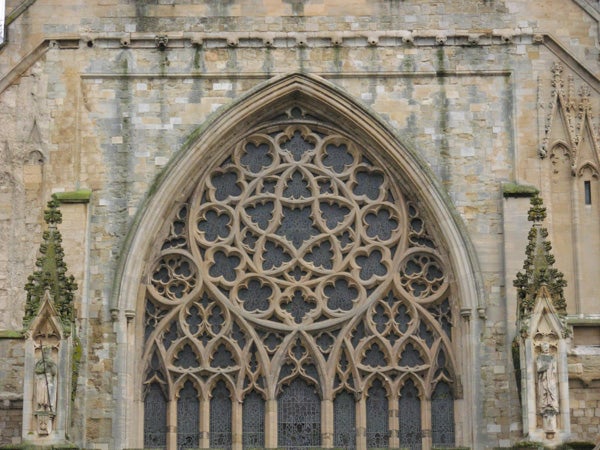 Here’s a shot of the front of Exeter Cathedral, my favourite shot for detail comparison. See below for a full-res crop of the centre of this image. 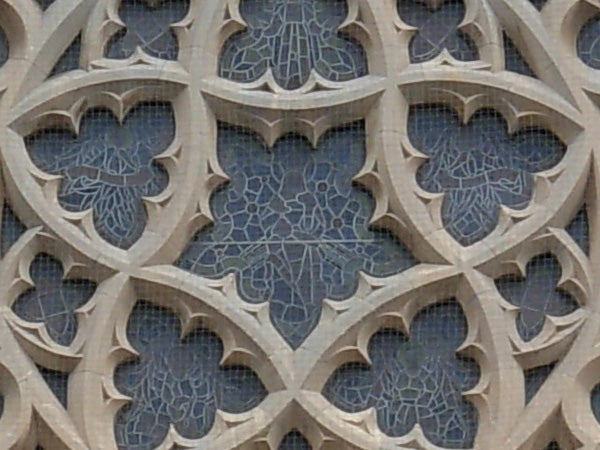 Compare the level of detail in this shot to similar pictures I’ve taken with other cameras to see how the L5 measures up. For this shot the camera’s exposure meter selected 79 ISO. I’ve seen better detail from six megapixel compacts, mostly due to the high compression of the L5’s JPEG files. 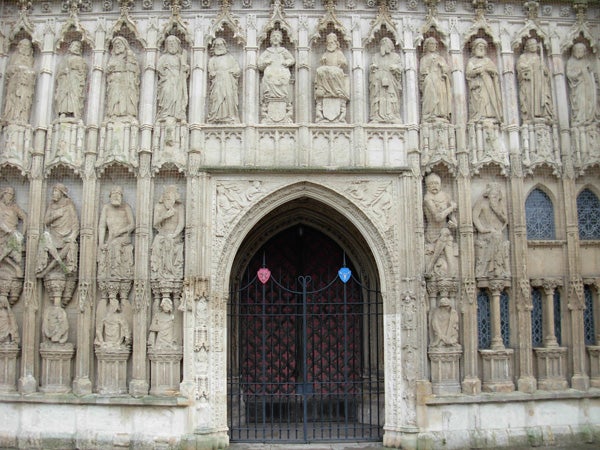 Despite only being equivalent to 38mm, the wide-angle end of the zoom range produces significant barrel distortion. 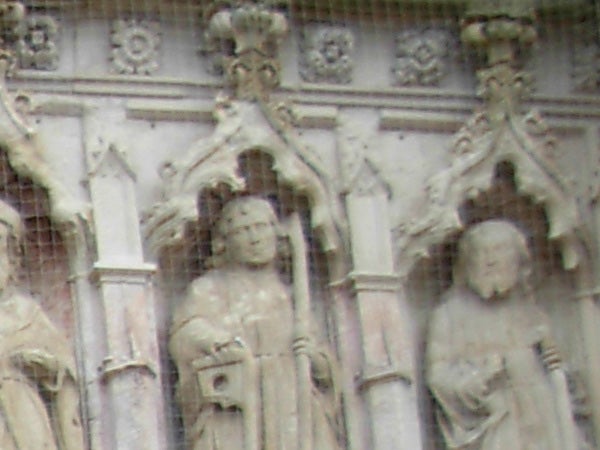 This image is cropped from the top right corner of the previous shot. As you can see the corner sharpness is very poor.