Superzoom cameras are traditionally fairly complex beasts. Often also referred to as bridge cameras, they usually represent a half-way point between simple point-and-shoot compacts and the technical complexity and creative versatility of DSLRs, with most of them sporting optional manual exposure, multiple metering and autofocus modes and other advanced features. However the popularity of long-zoom compacts or “travel cameras” such as Panasonic’s TZ range, Ricoh’s CX series, Canon’s SX series and more recently Sony’s technically impressive HX5 have shown that there is a market for easy-to-use cameras with powerful zoom lenses. It is only Nikon though that has really embraced the concept of a true superzoom camera that is as easy to operate as a snapshot compact. About this time last year it introduced the CoolPix L100, a camera with a big 15x zoom lens and the SLR-style body of a traditional superzoom, but with the simple controls and limited menu options of a point-and-shoot compact. Today I’m taking a look at that camera’s successor, the new CoolPix L110.

While the L110 succeeds the L100 it isn’t replacing it just yet, and the two models will sit side-by-side in Nikon’s line-up. While the L110 is still very easy to use it is a more advanced camera than its predecessor, offering a few more features to bring it up to date in a fast-moving market. The most obvious addition is its 720p HD video recording capability with stereo audio. Less obvious is the three-inch 460k monitor screen, double the resolution of the previous model. Inevitably the sensor resolution has also been increased from 10.1 to 12.1 megapixels. The lens is the same 15x zoom f/3.5-5.4 unit as the L100, equivalent to 28-420mm, and the camera also features sensor-shift image stabilisation, essential with a lens of this size. 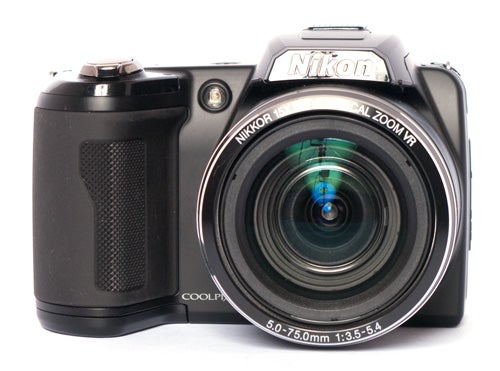 The camera body is very similar to the L100 and within a couple of millimetres of the same size, although there are a few minor differences. The body is made of plastic, but as with the rest of Nikon’s range the build quality is very good, with tight panel joins and good strong hinges on the battery/card hatch and pop-up flash. Although it’s obviously much bigger than a compact camera it’s relatively small and light for a superzoom, measuring 108.9 x 74.3 x 78.1mm and weighing approximately 406g including the memory card and four AA alkaline batteries. You could shave about 50g off that weight by using longer-lasting Lithium technology batteries instead. The body has a large handgrip with a textured grip area, and a round thumbgrip on the back. It is very comfortable to hold and easy to grip securely. It comes with a good quality neck strap.

Like the compact cameras in Nikon’s L-series, the L110 has a very limited range of features. It has five main shooting modes. The basic Auto mode provides the most versatility, but even here there are only five menu options, image size, white balance, continuous shooting, ISO and five basic colour options. 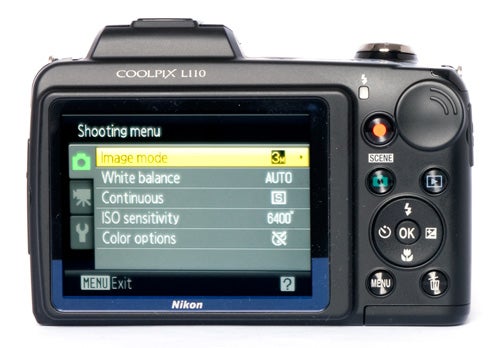 The Scene Mode offers 14 scene programs, although these are all fairly standard with settings for portrait, landscape, night portrait, parties, beach/snow, dusk/dawn etcetera. The Smart Portrait mode includes face and smile detection, while the Sport Continuous mode shoots up to 30 frames at 13fps, but only at three megapixel resolution. As well as these there is an Easy Auto mode aimed at those for whom the knapped flint hand axe represents dangerously advanced technology. In this mode all options but image size are automatic. 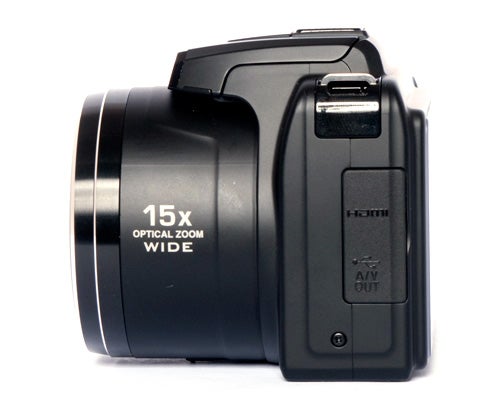 The L110 has a considerably more advanced video recording mode than the L100. It can shoot at 1280 x 720 resolution and 30fps. The autofocus can be used while shooting, as can the optical zoom, with the zoom action slowing down to a more video-friendly speed. The zoom motor is virtually silent in this mode, and cannot be heard on the audio track. Stereo audio is recorded by two small microphones mounted on the top of the camera, just behind the pop-up flash. The video quality is very good and so is the audio, but the stereo separation is almost non-existent and lacks directionality, not too surprising considering the position and close proximity of the microphones. 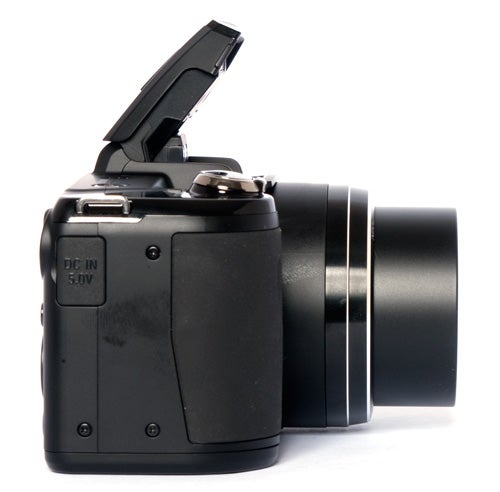 The L110 is equipped with Nikon’s sensor-shift image stabilisation system, and it is very effective. Given the lack of shutter speed control it’s hard to judge accurately, but it is capable of producing consistently sharp shots at full zoom at shutter speeds as low as 1/30th of a second, which is very impressive. There are a few features in playback mode too, including Nikon’s D-Lighting option, which boosts shadow detail when applied to high contrast shots. It is effective and produces good results, but like most such settings it doesn’t really help with burned out highlights.

In terms of overall performance the L110 is actually somewhat slower than the L100. It starts up and is ready to shoot in a little under three seconds, which is about the same as the previous model, but in single-shot mode at maximum quality it has a shot-to-shot time of approximately 2.5 seconds, which is considerably slower. The shooting speed is also inconsistent, appearing to go in three shot bursts, and will refuse to shoot or focus if it’s not ready. In continuous shooting mode it is also quite slow, shooting a frame approximately every 1.8 seconds, and as with the previous model it has no audio or visual cue to let you know when it’s shooting a frame. 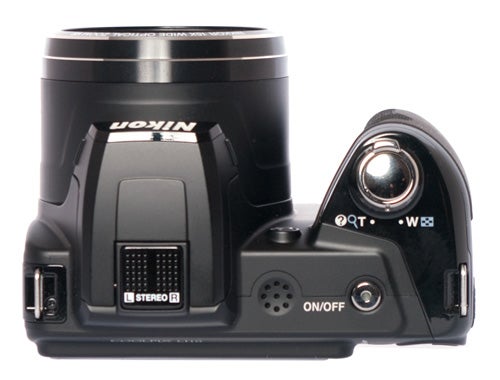 The autofocus system seems to be the same as the L100, with only centre-zone focusing, and the camera focuses quickly and accurately in good light, only slowing down a bit at longer zoom ranges and in lower light. The AF assist lamp has been greatly improved, and the camera will now focus reliably in total darkness at a range of several metres.


Overall picture quality is quite good, but there are a few problems. The lens has good edge-to-edge sharpness, but does suffer from quite noticeable chromatic aberration towards the corners of the frame, particularly in wide aperture shots. Colour rendition is bright but does tend to over-saturate reds, a problem which also present on the L100. The level of detail recorded by the 12MP sensor is impressive, but as with some other L-series cameras I’ve tried there is a general look of being over-sharpened and over-processed which robs the images of some fine detail.

Unfortunately the biggest problem is image noise, or rather noise reduction, which is very heavy-handed. There is colour distortion in the red channel even at 100 ISO, and by 400 ISO colour gradients look like complete guesswork, with very poor fine detail. Sadly this is likely the result of the tiny overcrowded 1/2.3-inch sensor, and is something we’re likely to see more often now that the main manufacturers have decided to resume pushing resolutions ever higher. Unfortunately the only way to get them to stop is to vote with your money.

The Nikon CoolPix L110 is a very unusual camera, a true superzoom that is as easy to use as a compact. It is well made, handles well and performs adequately, and the automation can be relied upon to produce decent results in a wide range of circumstances. It is let down by somewhat inferior image quality however, as usual caused by an overcrowded sensor. 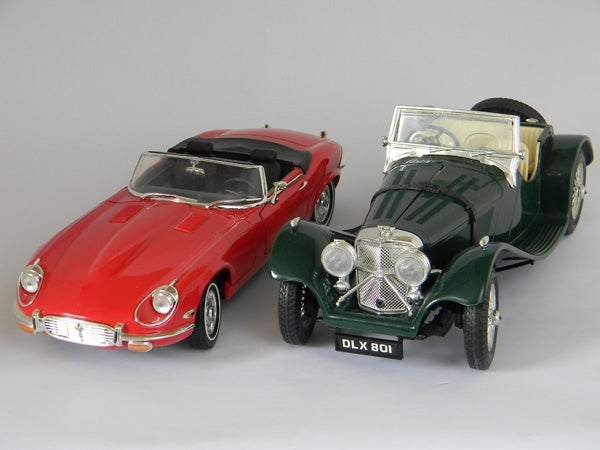 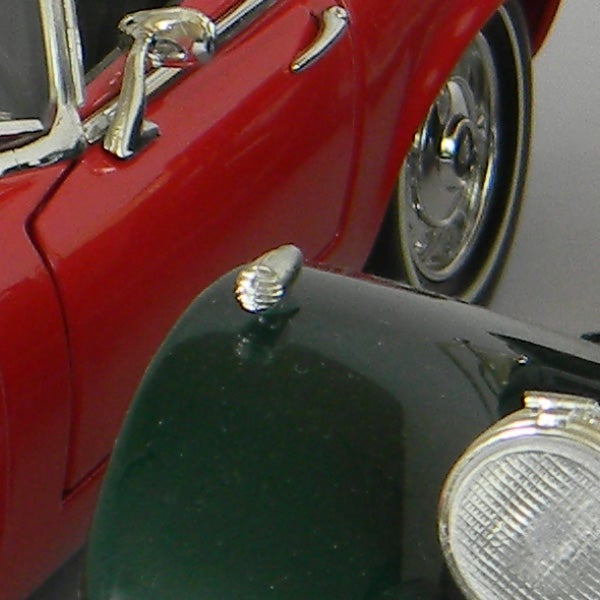 Even at 80 ISO there is a lack of really fine detail, although the white dots are dust on the car model itself, rather than noise. 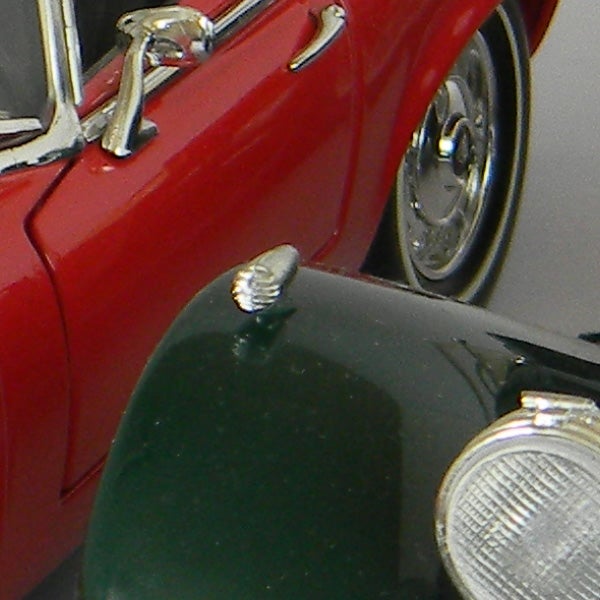 100 ISO and there is some patchy mottling on the red areas. 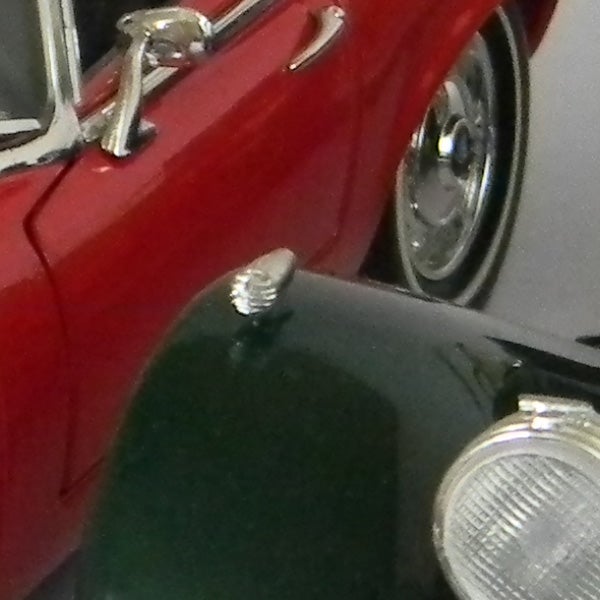 400 ISO and there is a sudden drop in colour fidelity, and the gradients look very patchy. 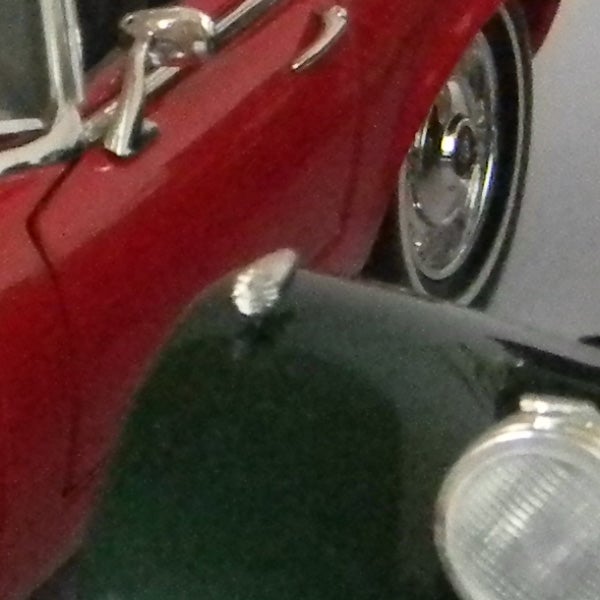 800 ISO is very noisy, a disappointing result to say the least. 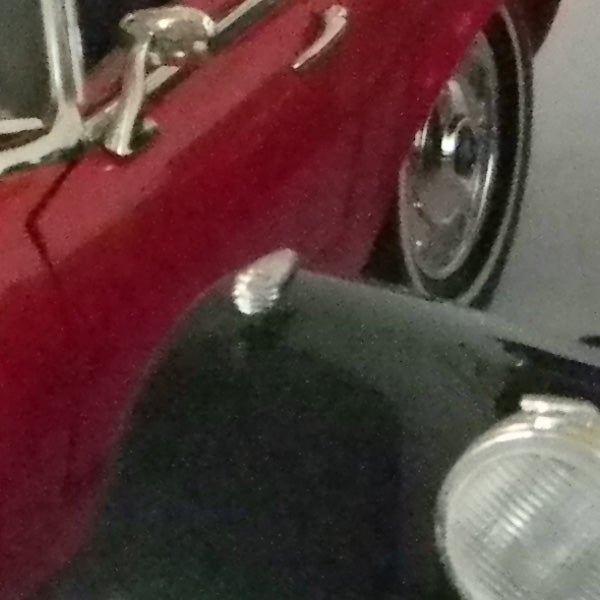 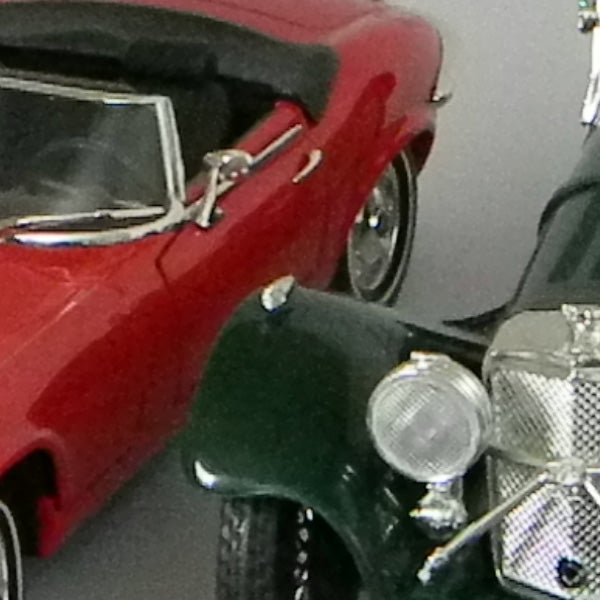 3200 ISO is available at 3MP, but the quality is web-cam standard. 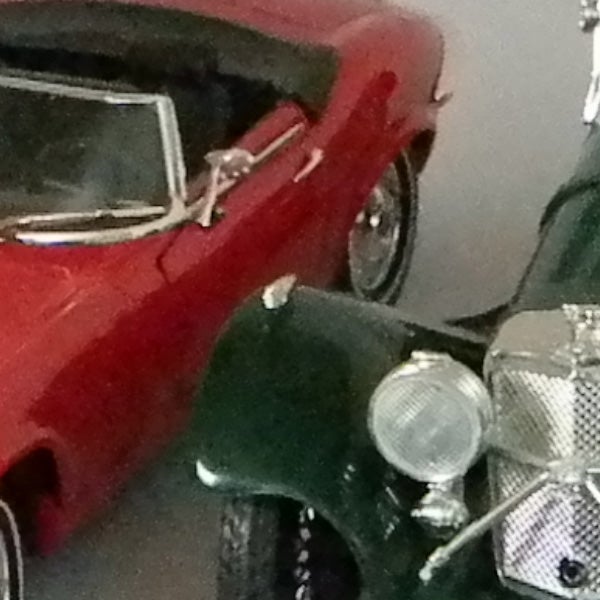 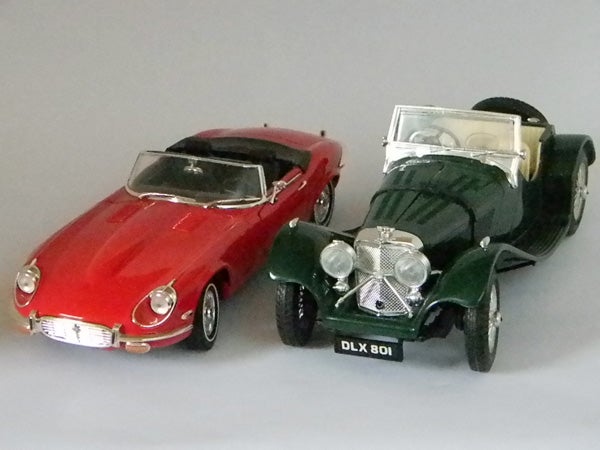 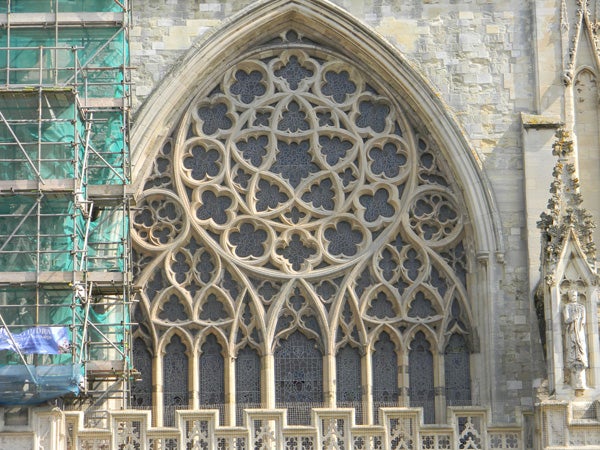 Here’s the usual detail test shot of the West Window of Exeter Cathedral, for you to compare with other cameras. See below for a full res crop, or click for the full sized image. The downloadable file is approximately 4.9MB. 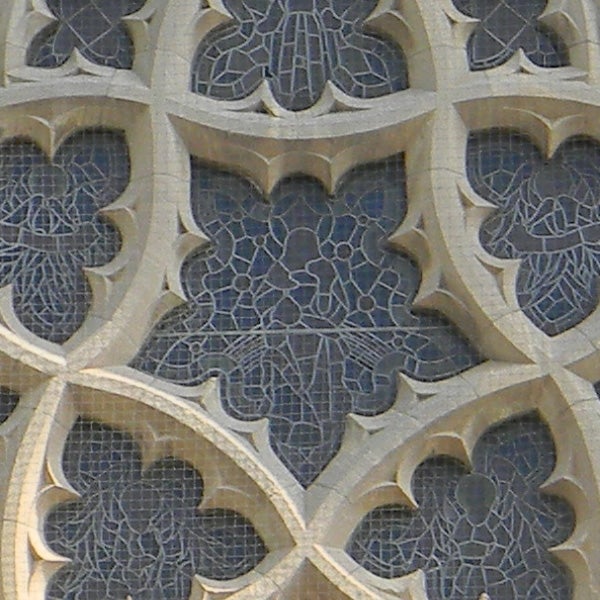 The lens captures plenty of detail, but the heavy-handed processing does it no favours. Any barrel distortion is corrected automatically in processing. 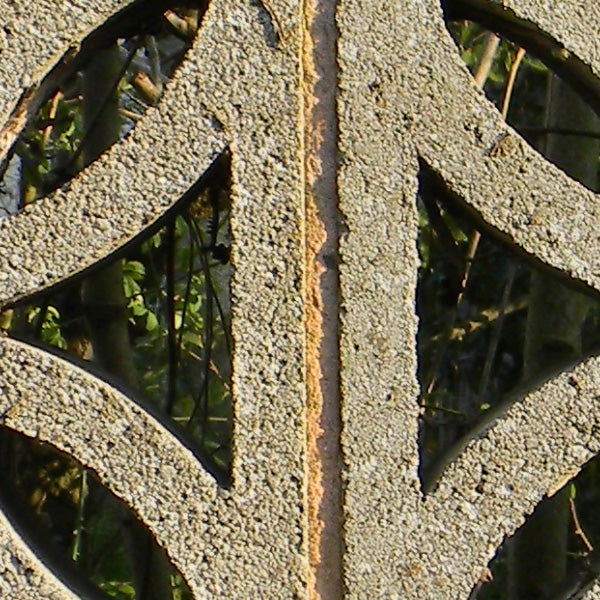 The centre sharpness is good, but the over-sharpening removes some of the finer detail. 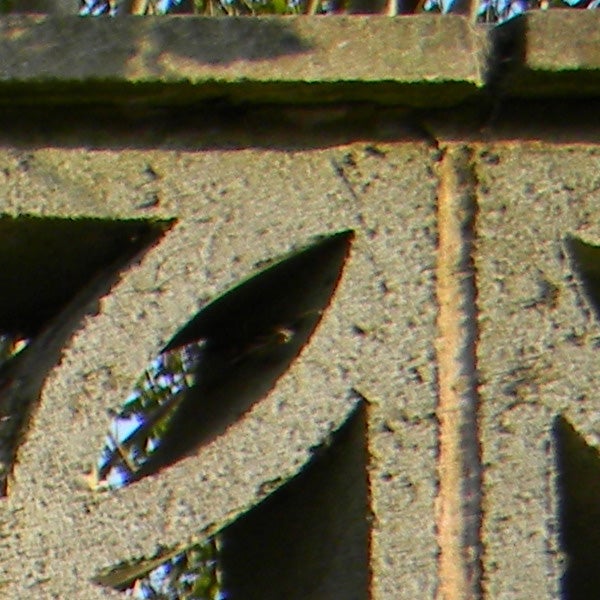 Very noticeable red-green chromatic aberration in the corners of the frame. 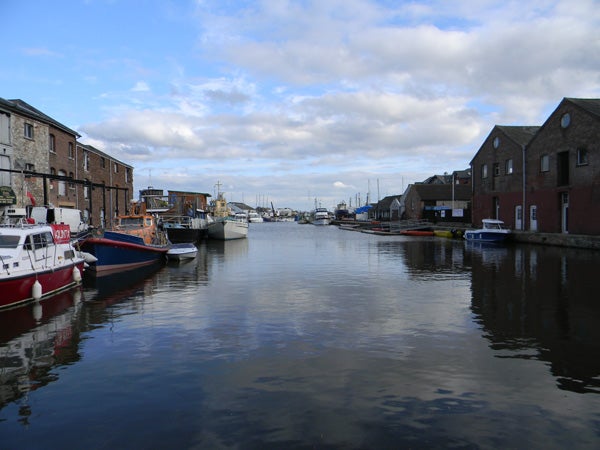 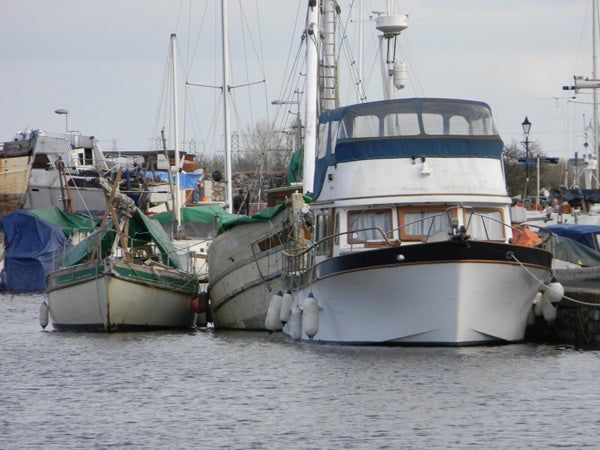 The telephoto end is equivalent to 420mm. 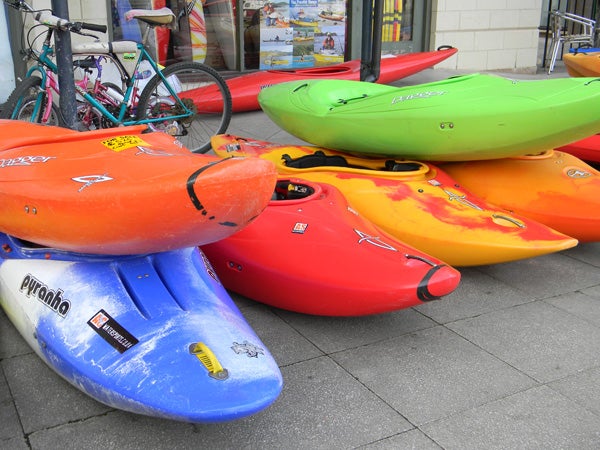 Colour rendition is somewhat over-saturated, especially on the red channel. 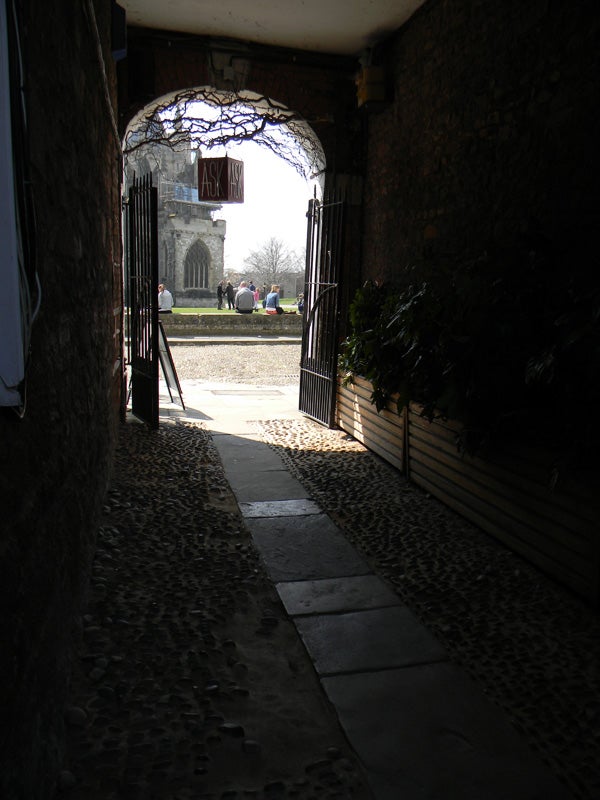 Dynamic range is limited, and there is little shadow detail in this high-contrast shot. 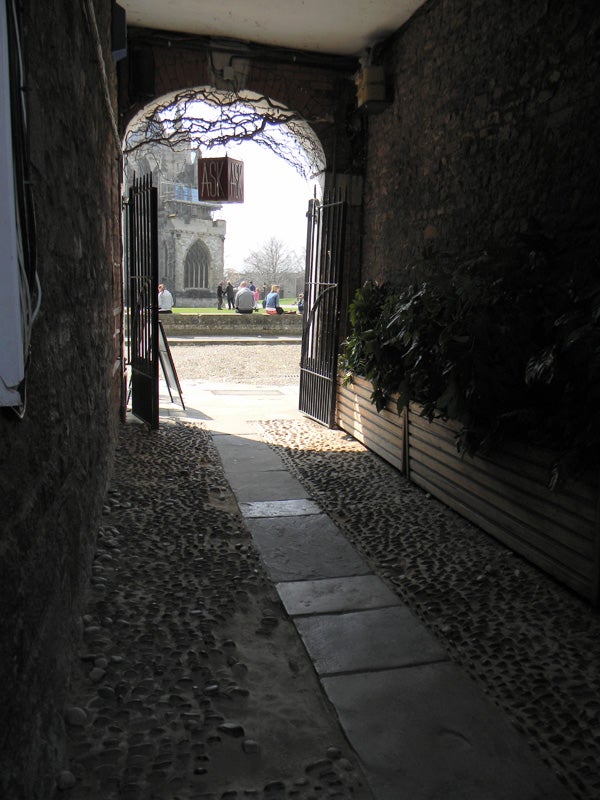