Over the past few years Nikon’s lens engineers have been a little preoccupied with their full-frame FX-format lenses, with only the odd update to existing (and it would perhaps be fair to say, often unremarkable) lenses in the DX-format line-up. While these lenses have their place, for owners of the higher end DX-format DSLRs like the D7200, this may be a little unsatisfactory. While FX lenses can be just at home on a DX body, they can be a bit of a compromise. Size can be an issue, as can the 1.5x crop factor on DX-format cameras that means wideangle coverage on zoom lenses is often sacrificed.

So if you’re in the market for a high-quality standard zoom lens for your DX-format DSLR, what are your choices? The AF-S DX Nikkor 17-55mm f/2.8G IF-ED was a pro-spec workhorse lens back in the days of the D1 and D2-series DSLRs, but it was designed in an era way before 24 million pixels, while the AF-S DX Nikkor 16-85mm f/3.5-5.6G ED VR doesn’t deliver the faster maximum aperture often desired. However, with the arrival of the AF-S DX Nikkor 16-80mm f/2.8-4E ED VR, it appears the wait for a high-quality standard zoom lens for DX-format DSLR users is over. 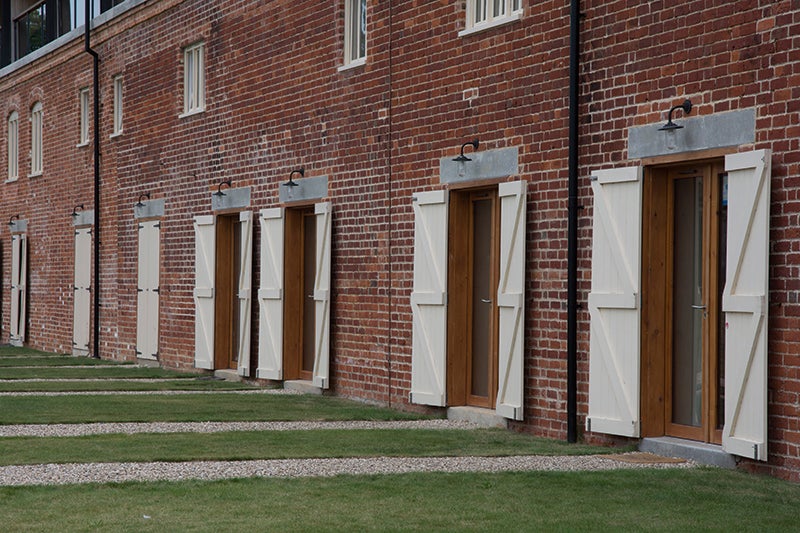 At 80mm, there is a minor pincushion distortion

Then there’s the fluorine coating that helps repel water and dirt, and makes it easier to clean the glass without damaging the front element (if you’re not using a UV or skylight filter on the front, that is).

As we’ve also seen with other recently launched Nikon lenses, the Nikkor 16-80mm f/2.8-4 features an electromagnetic diaphragm (denoted by the ‘E’ designation). This technology has been found on some of Nikon’s lenses for a while, and is designed to provide highly accurate control of the rounded diaphragm blades to ensure more consistent exposures during continuous shooting. It’s worth noting, though, that there are some compatibility issues if you’re thinking of pairing this lens with an older DSLR, including popular models like the D200 and D90.

Speaking of diaphragm blades, it’s perhaps a little disappointing to see only seven on this lens. Nine blades would have been better, as they tend to generate more pleasing bokeh thanks to the smoother circular shape they create.

Nikon’s Silent Wave Motor (AF-S) ensures that focusing noise is kept as quiet as possible, while the company’s Vibration Reduction (VR) anti-shake system is also on board, allowing up to 4 stops of compensation. There are also two modes to choose from – Normal and Active, with Active more suited to situations when you’re shooting from a moving vehicle, as the type of movement is different from that on a stable platform.

The 16-80mm focal length translates to a 35mm equivalent of 24-120mm on a DX-format DSLR, providing a broad focal range from decent wideangle coverage to moderate telephoto, making it versatile enough for a range of subjects. The maximum aperture may be variable, but it’s still a welcome f/2.8-4, which, when paired with the VR system, should deliver plenty of flexibility under varied lighting.

The lens requires a reasonably large 72mm filter thread, but the inclusion of internal focusing means your polarising or ND grad filter won’t spin round when you focus and the front element remains in a fixed position. 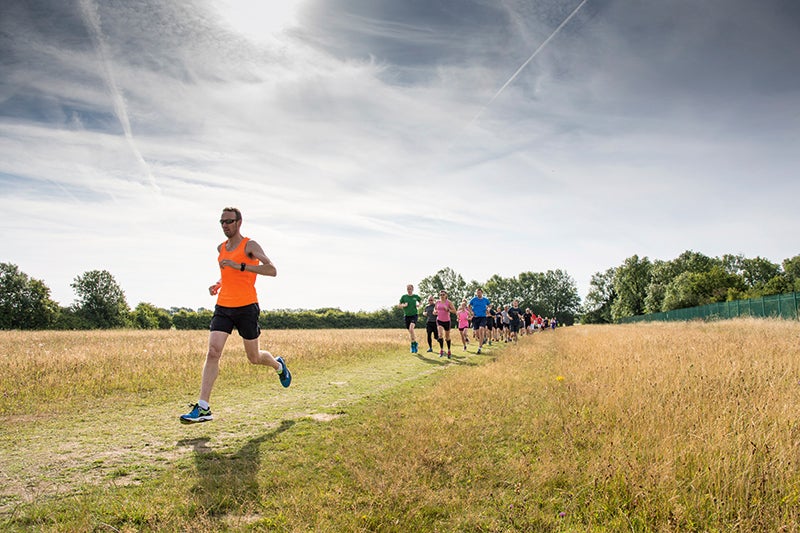 Thanks to the use of Nikon’s Silent Wave Motor, focusing noise is virtually inaudible. When partnered with a D7200, focusing speed is also nice and snappy, locking on to focus quickly and accurately under a range of conditions, from early morning landscapes to fast-paced action shots. Focusing isn’t quite as instantaneous when jumping from either extreme of the focusing range, but it’s still more than satisfactory. 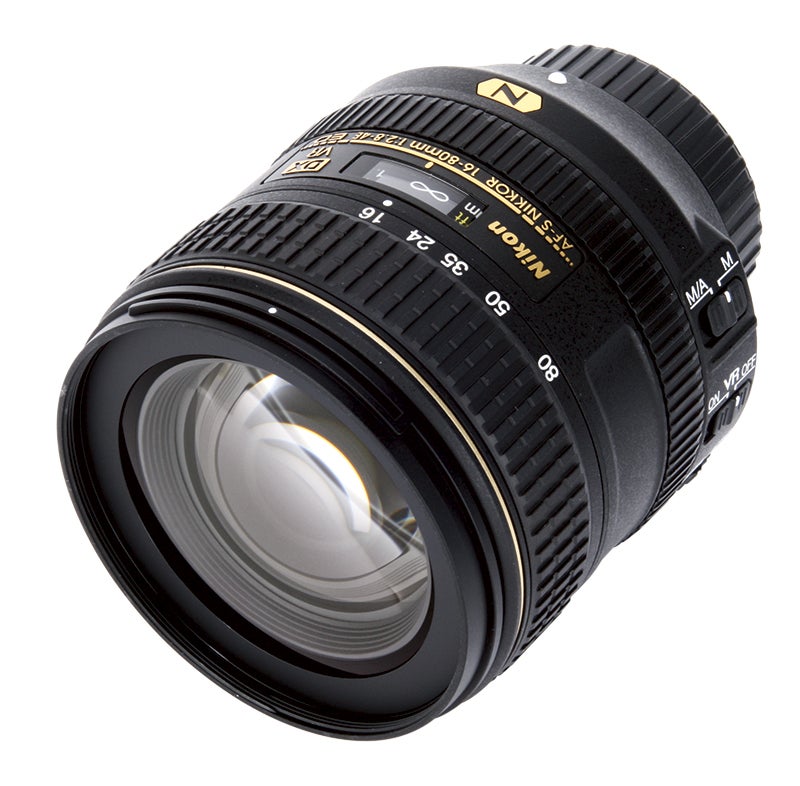 The exterior build of the Nikkor 16-80mm f/2.8-4 shies away from a metal construction in favour of high-quality plastic that is finished with a dappled texture that complements the company’s DSLRs. However, there is a metal mount at the rear, and a nice touch is the inclusion of an O-ring seal around the mount to limit dust and water entering the camera. It’s worth noting, though, that the lens doesn’t pretend to be weather-sealed.

When you consider the 5x focal length packed into this lens, it is an incredibly compact model and weighs a modest 480g. When teamed up with a D7200, the balance of body and lens in the hand is good, although on smaller DX-format DSLRs it will probably feel quite front-heavy. The compact size of the lens means there’s little space for a large zoom ring, but the one that’s fitted is adequate, and its positioning towards the front of the lens means it falls to the hand nicely. The slim manual-focus ring positioned further towards the camera body has a fine ribbed contour and rotates anti-clockwise from infinity to closest focus (0.35m), with a relatively smooth transition through the range. Between the zoom and manual-focus rings is a modest focus-distance-scale window, marked in both feet and metres.

On the side of the lens are three switches. The first is a switch that allows manual override of autofocus with minimal lag time and regardless of what AF mode you’re using. Then there’s the choice of switching the VR on or off, while the third lets you select between Normal and Active VR modes. These switches are clearly labelled, and the only issue that may arise is if you want to change one of these settings quickly with the camera raised to your eye because they are all identical. 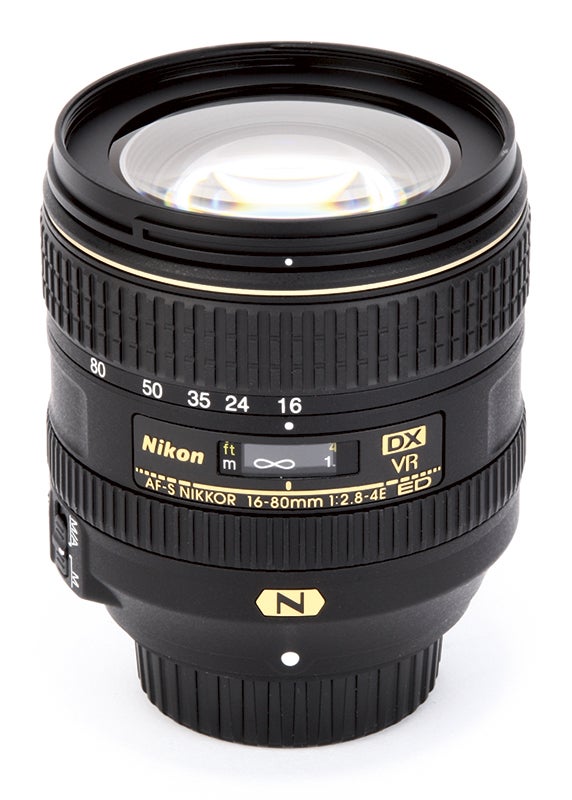 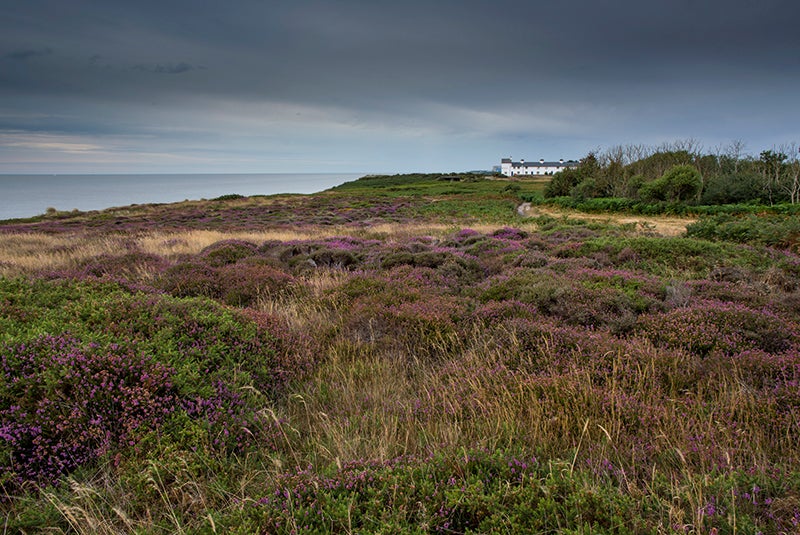 With an extensive 5x focal range running from wideangle to telephoto, there’s a reasonable amount of strain put on the optics to deliver decent results, not only through the zoom range but also through the aperture range. Despite a few small issues, though, the AF-S DX Nikkor 16-80mm f/2.8-4E ED VR lens delivers a solid performance.

It’s worth bearing in mind that when shooting subjects with critical straight lines, barrel distortion is present at 16mm. This became apparent when shooting a coastal scene, and trying to level the scene became impossible thanks to the slight bow in the horizon that was visible in the viewfinder. If you are prepared to adjust for this when shooting and then correct it in Adobe Photoshop Lightroom, then shooting at f/11, though not the sharpest aperture, still delivers nice results with decent edge-to-edge sharpness and virtually no signs of vignetting. 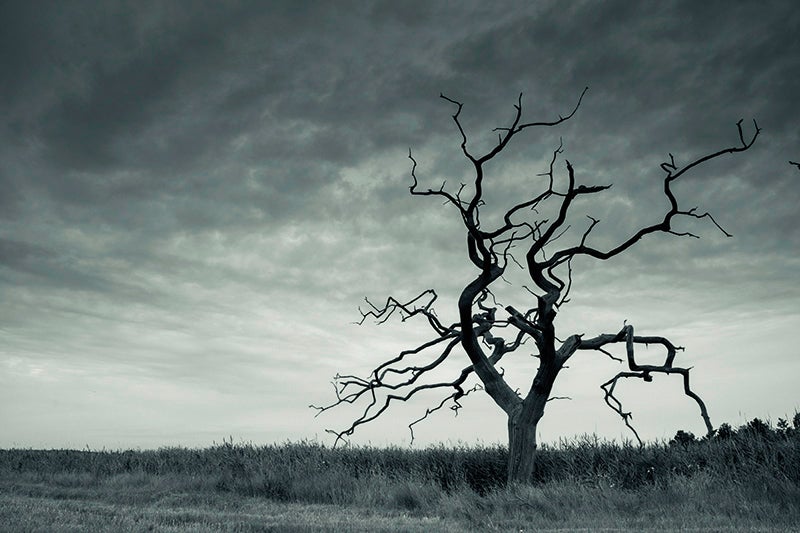 Vignetting is an issue wide open, but much better controlled as you stop the lens down

When shooting wide open at 16mm, image quality does suffer around the edges of the frame. While centre sharpness is good, there is noticeable vignetting right in the corners of the image. However, this may only really be the case at f/2.8, with things picking up as you stop down the lens.

Barrel distortion disappears as you move through the zoom range, to be replaced by only minor pincushion distortion, which is a lot better controlled. There are still issues with vignetting and edge sharpness when shooting wide open, but as I experienced at 16mm, if you stop the lens down by 1 or 2 stops things improve dramatically. 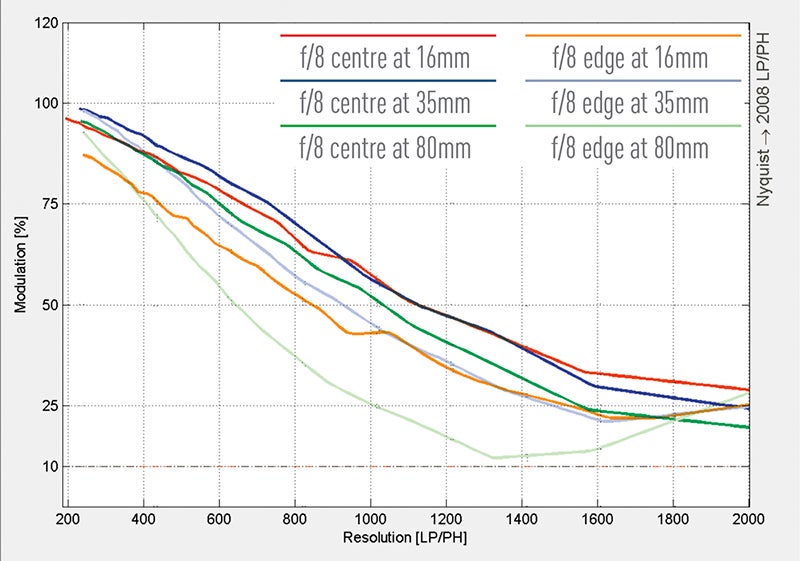 At 16mm and f/2.8, centre sharpness is good but edge sharpness does suffer. However, this improves somewhat as you stop the lens down, with around f/5.6-8 delivering the best results for centre and corner sharpness. Beyond that, diffraction starts to become an issue. At 80mm, edge sharpness at f/4 doesn’t match the centre of the frame, with f/5.6 delivering the sharpest results. 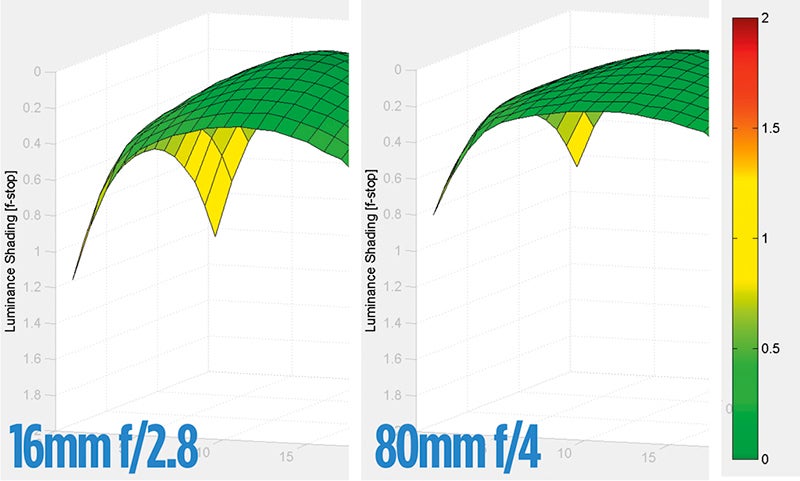 There’s severe vignetting when using the lens wide open at f/2.8 and 16mm, but it starts to disappear when stopped down a little at f/4 before being well controlled beyond that. At 80mm, vignetting is slightly better controlled at f/4, although there’s quite a drop-off at the edges of the frame. From f/8 onwards, though, things are controlled well. 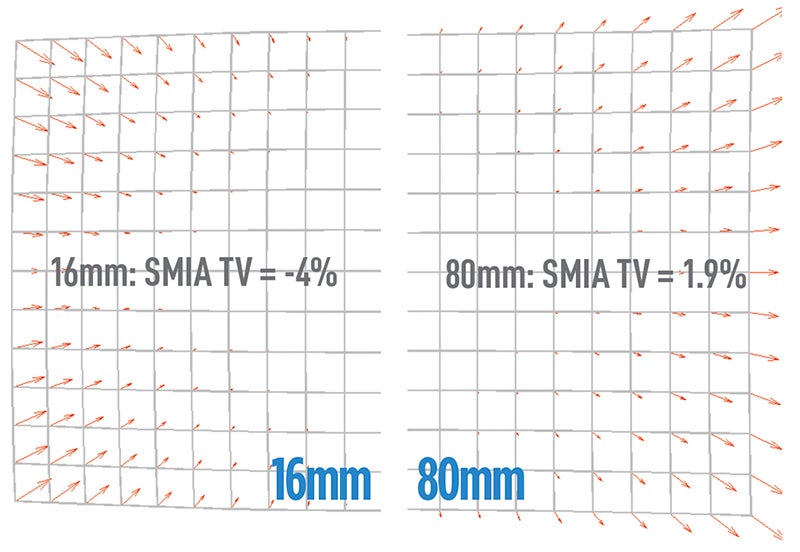 At 16mm noticeable barrel distortion can be seen in our test results, with the straight lines of our chart bowing out towards the edge of the frame. This disappears as you move through the zoom range, replaced by pincushion distortion. This is noticeable in our charts at 35mm, although it doesn’t deteriorate too much after that.

The Nikkor 16-80mm f/2.8-4 delivers some great results, and so long as you’re aware of its shortfalls you won’t be disappointed. Its overall performance is good, with dependable performances from the autofocus and Vibration Reduction. It would have been nice to have seen more metal used in the construction, but this would have added to the weight.