Since 2009 when the Panasonic Lumix G1 became the first compact system camera to reach the shelves CSC sales have exploded, with all of the major manufacturers now offering their own take on the genre. Four years on and CSCs remain the fastest growing segment of the digital camera market, and with good reason too. Consumers have been drawn in ever-greater numbers by the twin promises of DSLR-like image quality and the added flexibility of an interchangeable lens system, but without the bulk of a traditional DSLR.

Nikon was actually something of a latecomer to the market, with the first generation of Nikon 1 cameras launching at the end of 2011 in the shape of the entry-level Nikon 1 J1 and more advanced V1. Both were launched with much marketing fanfare, with Nikon particularly keen to showcase the ability of both models to begin recording images before the shutter button had been fully pressed. While this – and indeed many other elements – of the J1 and V1 impressed critics, there were also some elements that left many disappointed, not least the combination of a high price tag and the burying of manual and semi-manual exposure modes deep within the menu system rather than on a standalone mode dial as is more commonplace.

Fast forward twelve months or so and the V2 picks up where the V1 left off and although it comes with a similar feature set the body has been completely redesigned. Has Nikon seen fit to address the most common complaints with the V1 and does the V2 improve on the impressive, yet ultimately flawed V1? Let’s take a closer look and find out.

The V2 follows directly on from the V1 by employing a one-inch (13.2 x 8.8mm) CMOS sensor at its heart. Nikon refers to this size of sensor as ‘CX’ format, as opposed to it’s DX APS-C sensors and FX full-frame chips. Nikon’s decision to go with a one-inch sensor for the Nikon 1 series certainly raised a few eyebrows when the range was first announced, with many observers noting that Nikon’s CX sensor is quite a bit smaller than the Micro Four Thirds sensor used by Panasonic and Olympus CSCs, and even smaller still than the APS-C sensors favoured by other CSC manufacturers such as Canon, Sony and Samsung. That said the V2’s one-inch sensor is still around twice the size of the 1/1.7in sensors found in many advanced compacts. In turn, the 13.2 x 8.8mm CMOS sensor gives the J2 a 2.7x crop factor, which in 35mm terms turns the standard 10-20mm kit zoom into a 27-54mm lens. 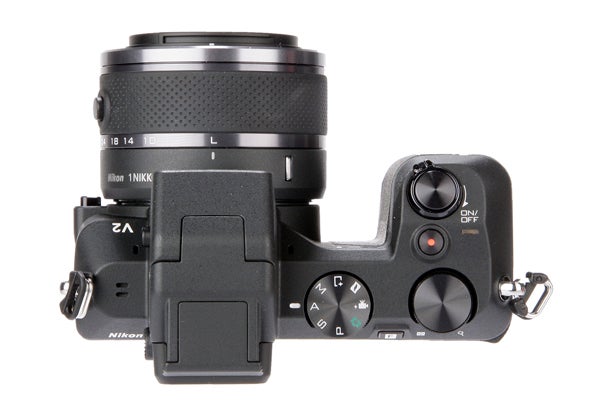 While the V2’s sensor size remains the same, resolution has been boosted to 14.2MP – a fairly sizeable increase over the 10.1MP offered by the V1. In keeping with its predecessor the V2 is able to record both lossless Raw and JPEG still images, and can also be used to capture 1080p Full HD video at 60fps. The V2 is only able to record still images in the camera’s native 3:2 aspect, although it is possible to reduce effective resolution, which could be handy if you’re shooting non-critical snapshots destined purely for the web. Sensitivity ranges between ISO 160 and 6400 – in contrast to the standard ISO 100-3200 range offered by the V1 (though it should be noted that the V1 also offers an extended ‘Hi1’ setting that equates to ISO 6400).

The V2 features the full range of Program, Aperture-priority, Shutter-priority and Manual shooting controls allowing more advanced users to take as much control over the camera as they want to. Better still, these exposure modes can now be accessed directly from the main mode dial located on the top-plate rather than having to trawl through the in-camera menu as was the case with the V1.

For less advanced users the V2 also offers a range of fully automatic exposure modes, including an Advanced Auto mode. Taking advantage of the V2’s speedy shooting abilities there are also a number of ‘Best Moment Capture’ options, including a ‘Smart Photo Selector’ feature that takes up to 20 high-resolution images and then recommends what the camera deems to be five of the best for you to keep. 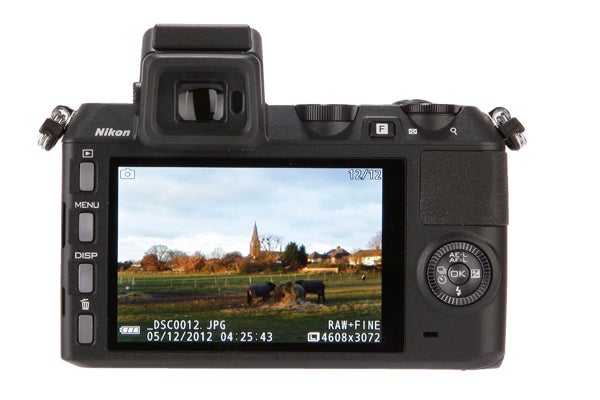 One criticism we had of the V1 was that it only offered an automatic video capture mode – thankfully the V2 now features full PASM control when shooting video. The advanced video modes found in the V1 remain, with options to shoot high-speed video (that plays back in slow motion) at either 400fps or 1200fps, the trade-off being that these play back at a reduced resolution of 640 x 240 and 320 x 120 pixels respectively.

Another area where the V2 improves on its predecessor is with the addition of a built-in, pop-up flash. The lack of one in the V1 was something that attracted some criticism – especially given how the Nikon SB-N5 flash that’s specifically designed to slot in to the V1’s proprietary ‘accessory port’ hot shoe cost in excess of £100. The V2 comes with the same hot shoe design, so owners can choose to attach the SB-N5 should they require a bit more flash power, however for less intensive requirements the V2’s built-in flash offers a good range of modes.

Elsewhere, the V2’s LCD display and viewfinder both retain the same specifications as the V1, with the 3in TFT LCD display on the back offering a useful 921k-dots for pin-sharp viewing. Above the display sits an impressive 0.47in, 1,440k-dot TFT LCD viewfinder, complete with brightness adjustment and dioptre control. 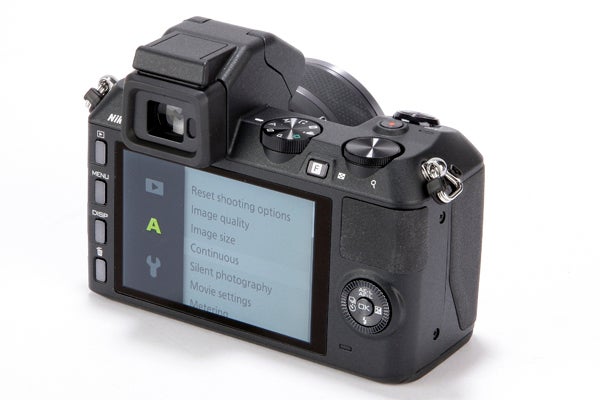