Fitness and technology have gone hand in hand since as far back as Hermes, Greek messenger of the gods who first strapped on his fabled winged boots and took to the skies. Fast forward a few thousand years and things are little different, which is why we’re reviewing the Nike SportWatch.

The SportWatch, which we first saw at CES and is made in collaboration with sat nav heavyweights TomTom, is a GPS Enabled time keeping device that tracks and stores your distance, speed, time, pace, calories burned and allows you to share details online with your friends or virtual training community. 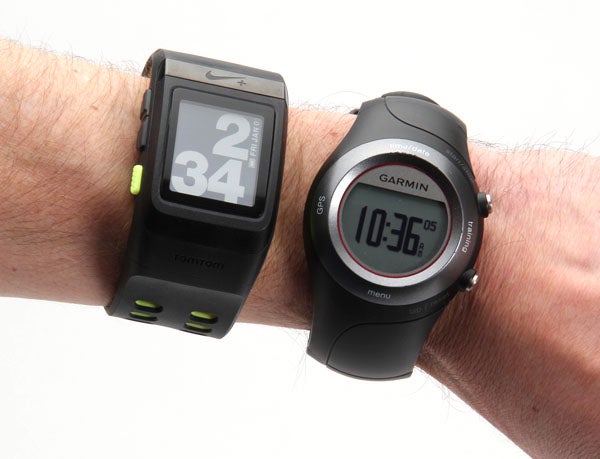 The large flat, angular base of the watch causes the watch to overhang smaller wrists slightly and it isn’t as comfortable as more recent Garmin models, but it is just as small and in our opinion more stylish in that it looks like a piece of sporting equipment – none of these such watches are really suited to everyday wearing. The replaceable strap is very secure once on the watch and it is 65 grams, 13g heavier than the Garmin 210 and 2g more than a G-Shock Classic.

The 34 x 70 x 17mm watch isn’t too large compared to GPS-enabled devices of yore and the 2.4 x 2.7 cm LCD display is the clearest we have seen on any sport watch, with white numbers and letters on a black background. 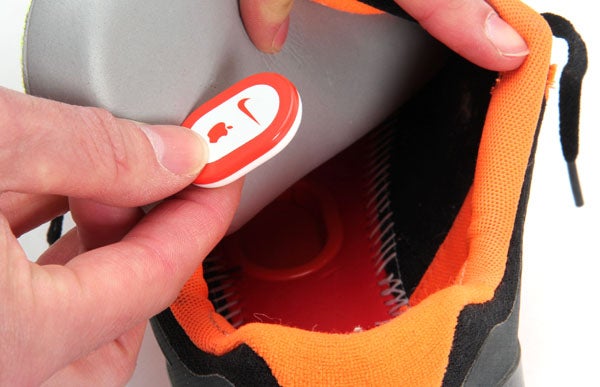 The watch also comes with a the Nike sensor ShoePod, an accelerometer which measures footfalls so runners can track their distance based on pace when they are running on a treadmill or indoors where they can’t receive a satellite signal. This can be fastened to a shoe’s laces with a small carrier or can be inserted in the sole of a Nike compatible running shoe like the LunarGlide range.

We took the SportWatch through the ultimate road test, along 26.2 miles of the Paris Marathon – see the full route here – and the ShoePod really came into its own in the runs through the underpasses along the Seine. 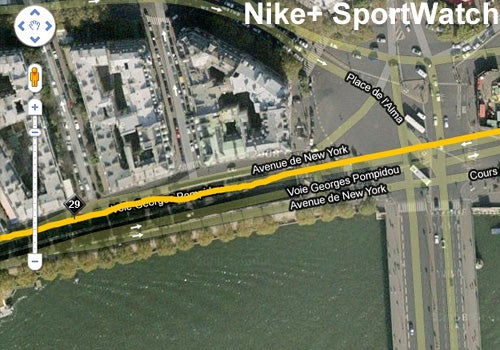 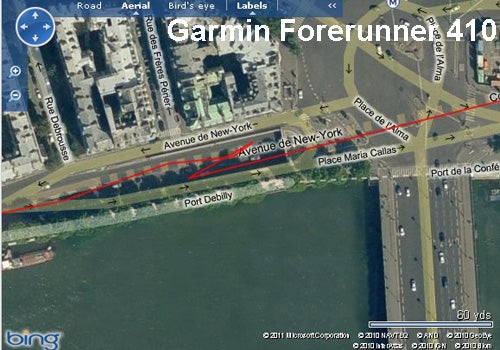 Whenever the satellite signal dropped out, the SportWatch kept on tracking the mileage via the shoe pod, unlike the Garmin Forerunner 410, which had nothing to fall back on. The SportWatch said we ran 26.52 miles, whereas the Forerunner 410 said we ran 26.41. While it is normal for marathoners to run further than the statutory distance because of taking wide bends along the route, the extra distance on the SportWatch could be down to greater accuracy afforded by the ShoePod. 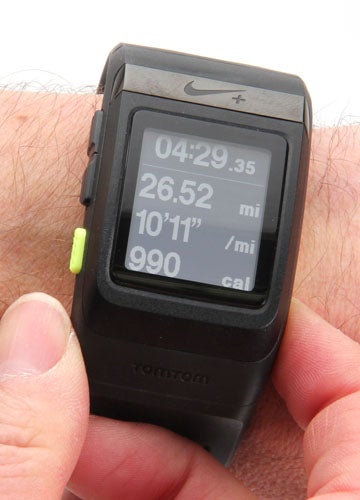 Over the course of a marathon, a runner can expect to burn anything between 2,500 to 3,500 calories, so we were disappointed that the SportWatch said we burned up 990 calories along the 4:29:37 run, whereas the Garmin said we lost 3,046 calories. This was because we had not put our weight in the Profile section of the SportWatch PC interface – ideally, like setting the time, we would have liked to be able to input user profile on the watch itself instead of via a PC with the Nike software installed on it.

Unlike other sport watches like the Garmin Forerunner 410, you aren’t able to store routes or train against a virtual partner or view your per mile splits on the watch itself, but the best thing about the SportWatch is its simplicity. 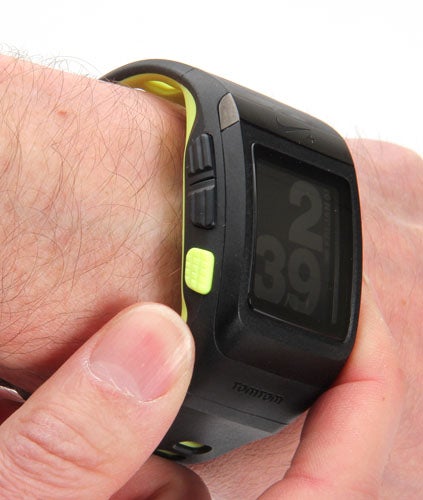 If you want to turn on the backlight, you simply tap the face of the watch. This does away with the awkward multitouch bezel seen on the Garmin Forerunner 410 and eliminates the need for an extra button that serves as nothing more than light switch.

To scroll through the control menu you don’t have to select a button that says “Menu”, you simply use the top or bottom button and the menu just appears. 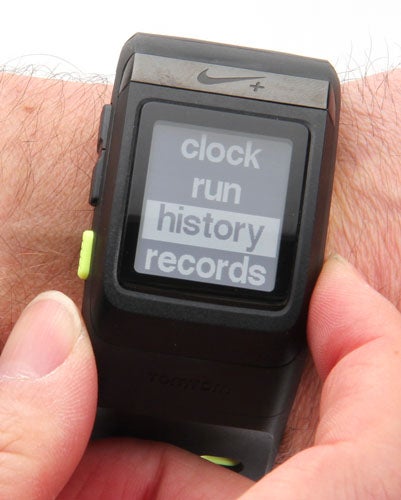 To record a run, you don’t have to go to a training menu, you just scroll to Run and the watch quickly finds a satellite signal, a ShoePod, or both and once these are locked on and you start running, you can view your distance, pace, time lapsed, current time or calories burnt. 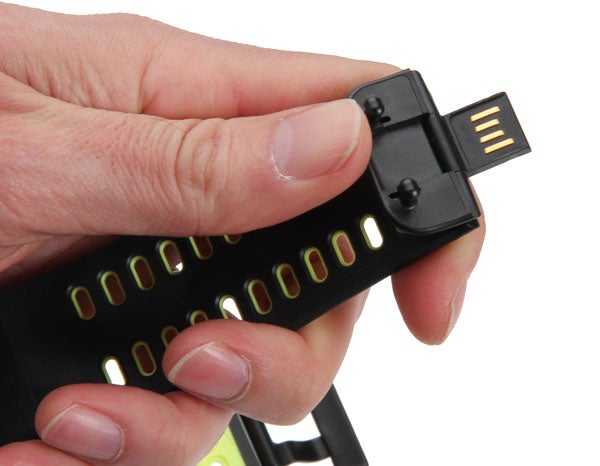 No wires or dongles are needed to sync up to the nikeplus.com running service or charge the watch as the USB connector is neatly encased in the strap itself. This saves having to carry leads around when you’re on the move and you want to add your workout to the database of more than 150 million runs logged since 2006.

The watch has some nice tricks up its sleeve as it displays your records over your whole training history of the last fifty runs. As well as total mileage, you can view your fastest mile, fastest 5k or 10k and view your longest run. If you achieve a new record after a run, you’ll be rewarded with  a congratulatory message on the watch – something Nike calls “attaboys”.

Battery life is 8 hours in workout mode and it will last 50 days as a normal watch.

The Nike SportWatch also sends run reminders if a workout has not been logged in five days – something we found a little forward after running a marathon, but you have to admire its enthusiasm. 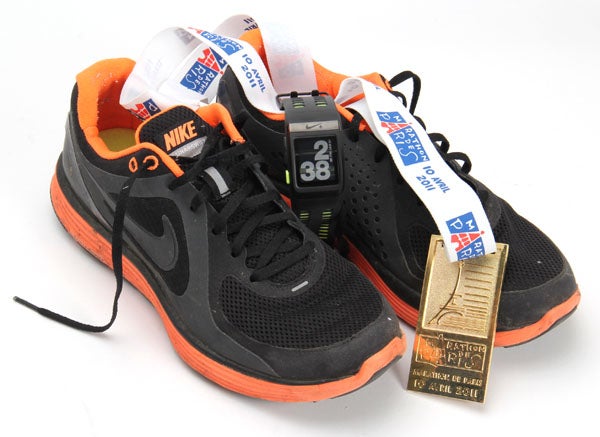 The SportWatch is not as customizable as its rivals: you can’t switch between kilometres or miles. You also can’t view your mile by mile splits after your run on watch, with the only available being distance covered, average pace, run time and calories burned, although more detailed information is available on nikeplus.com including GPS mapping, total miles, pace and elevation data.

We found a flaw in the pacing data in that it is too responsive. Whereas the Garmin Forerunner 210 and 410 smooth out the pace over a short time period to accurately relay to the runner how fast they are moving, the SportWatch provides a view of how fast you are running at that very moment. In other words, if you slow down to look at your watch, you instantly get a false reading, as every stumble, jump, sidestep and falter is recorded in real time so you’re never sure of your general progress. 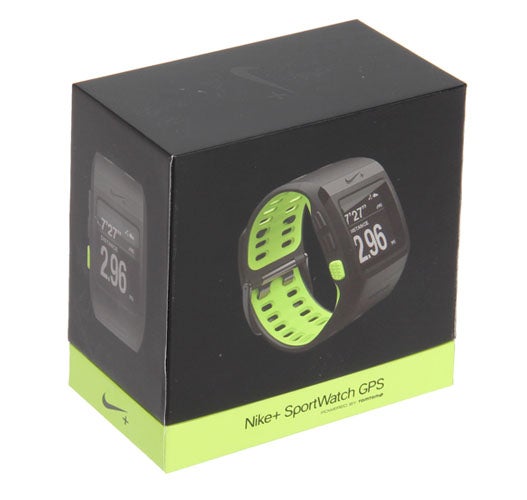 It’s also impossible to set the time without syncing to a computer, which meant we were running on UK time while in France.

While it’s not packed with features, the Nike SportWatch is reliable, easy to operate with a great display and at a relatively low price of £179 including the ShoePod, it’s a worthy addition to your fitness kit.