There’s still two ways to view progress and that’s via the Nike website and the Nike Fuelband app. It’s still iOS only so there’s still no Android love and will only work with iPhone 4S and above or a 5th generation iPod Touch running on iOS 6.01 later.

Setting up is near identical to the first generation Fuelband where there’s now more flexibility for setting the daily Fuel point goal. You can also get an idea of what similar aged users opt for if you think you are setting the bar too low. 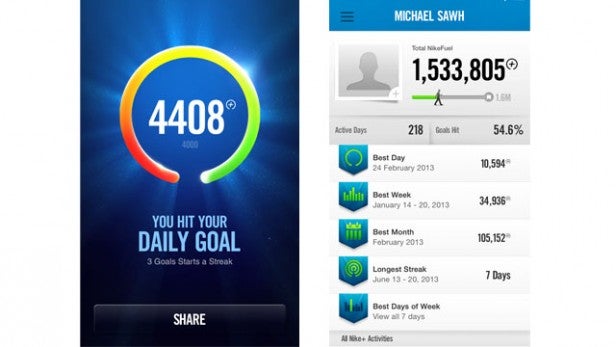 The biggest change is that the Fuelband SE has  Bluetooth 4.0, so data can be synced automatically with the app in real-time instead of having to sync manually or holding the button down. The Bluetooth standard is designed to deal with collecting information more frequently without adversely affecting the battery life.

Venturing inside the app there’s a drop down menu with Fuelband battery life, daily goal and notifications at the top. Below you can see your Nike profile, current day’s activity, along with Sessions, Trophies, Friends and Groups. Progress is presented in a series of graphs and progress power gauges to see data from days, weeks or even months. By turning the phone into landscape view there’s additional data displayed on percentage of your daily goal hit, hours won and intense minutes. 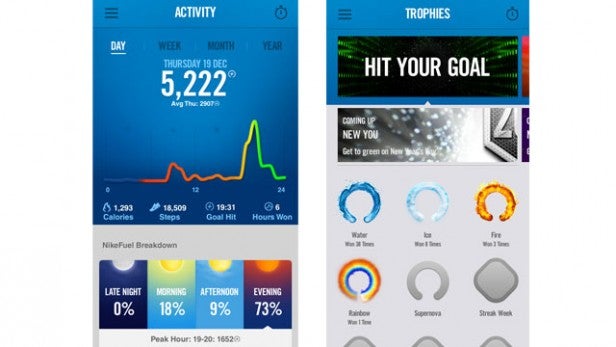 Social integration is big part of what the app is about with the ability to share progress over Facebook, Twitter and Path. If you don’t want to bombard news feeds with your physical endeavours that’s where the new Groups feature comes into play. Here you can choose to share information with select groups of people like friends and co-workers instead.

All the information is very digestible and the trophies for hitting milestones is a great way to feel like you are really making progress. It can be difficult to identify which information is the most valuable and that could be made more clear. It’s also worth noting that you can’t input food data either, something Fitbit does a really good job of and would be nice to see in a later update. 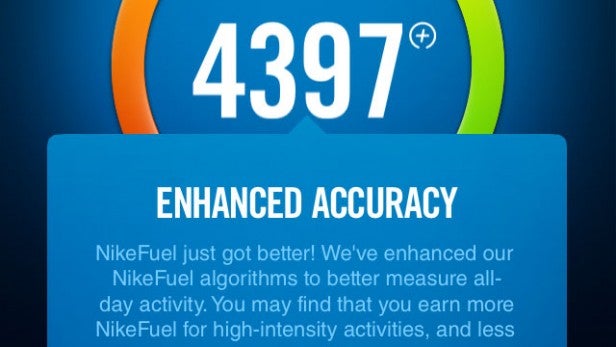 Nike says it has improved the algorithims used to track activity and stop users from simply moving their wrist up in the air while sitting on the sofa eating a burger to add more Fuel points. The Fuelband SE will be able to recognize more intensive activities and score you more Fuel points.

It’s unclear how Nike has managed to do this, but it’s clear that you can still wave around your hand for a few seconds and add 10 or so Fuel points. Cheating the system is still possible and that’s invariably something Nike is going to continually need to address.

For activities like walking and running the new Sessions mode caters for it well. Putting it up against the Nike Running app Fuel Points collected were consistent and calories burned more or less matched what was recorded on our TomTom Runner GPS sports watch.

In the gym it’s something of more frustrating experience. Riding on a stationary exercise bike will not work in the Sessions mode and we didn’t have better luck with a weights session. Again this all about applying Nike’s own metric system to an activity it can not actually accurately record.

Having the addition of a heart rate sensor and altimeter could give a more detailed picture and compensate for the Fuelband’s inability to track activities like cycling. Until then, there’s going to be some discrepancies about the accuracy of the Fuel points applied to other activities. 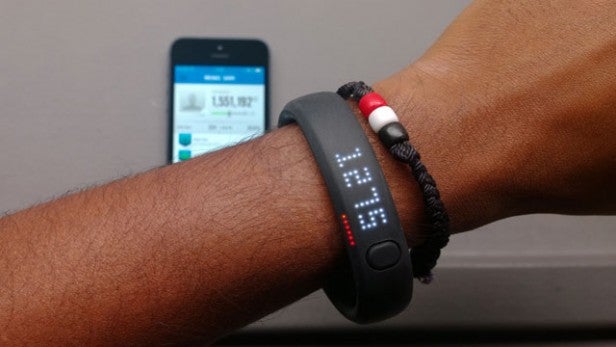 Ask anyone who owns the first generation Nike Fuelband and they will probably tell you that the most disappointing thing about about it was the battery life. At best, it lasted close to two days despite the promises to stay charged for four days.

The Fuelband SE once again includes two lithium polymer batteries with the aim of getting you through four days of Fuel point-collecting. You can still charge it via the built-in USB, although it’s recommended it’s done via the supplied USB charging adaptor.

Things have definitely improved in this department as we managed 6-7 days without requiring a charging top-up. It doesn’t match the staying power of the Fitbit trackers or Jawbone Up, but it’s definitely a step in the right direction. 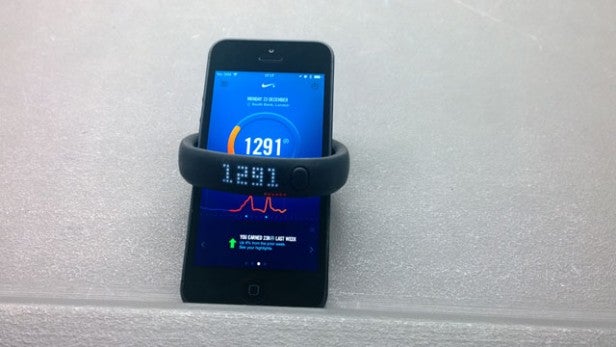 Should I buy the Nike Fuelband SE?

If you are serious into running, spend most of the time cycling and already hit the gym four or five times a week, the Nike Fuelband SE is not really aimed at you. Fitness trackers are for people trying to get fit in smaller, more gradual steps. While the Fuelband SE does a very good job of it, it’s expensive at £129.

And the competition is fierce, A device like the Withings Pulse can be bought for less than £100 and can do the same job with added features that the SE cannot currently offer like a built-in heart rate monitor. The Fitbit Flex and soon to be released Fitbit Force can track steps climbed to get richer, more valuable data. You burn more calories going up stairs and measuring heart rate gives you a clearer idea of hard you have actually worked.

If you own an iPhone 5S you could download the Nike Move app that supports the new M7 co-processor and collects similar data to the Fuelband. Some of the new features like Sessions, Win the Hour and sleep tracking are good ideas but not perfectly executed. Being waterproof is not a deal breaker, though it would be nice to have seen it added. The exclusion of Android is a continual disappointment as well.

It’s still the nicest looking of the fitness tracking bunch and that is going to be a big selling point for Nike. If you already own the first generation Nike Fuelband, the biggest advantages is really going to be the Bluetooth 4.0 syncing and battery life. A firmware update actually adds the improved algorithims so you are not missing out on that. Other than that, we’d say hold off for the third generation Nike Fuelband.

The Nike Fuelband SE is still by far the best looking fitness tracker but its rivals like Fitbit and Withings are catching up and we hope for more when the next generation Fuelband lands.