Sometimes it’s best to come straight out with it. If, like me, you’ve spent the time since 1996 eagerly awaiting a sequel for Sega’s cult classic Nights into Dreams, this is going to come as a big disappointment.


The original Nights was hopelessly equipped to do the job Sega wanted it to do – be the Saturn console’s answer to Super Mario 64 – but it’s still fondly remembered as one of the freshest, most original games of the era. In a way, it felt like an aerobatic version of the Sonic games; despite the 3D looks, the titular jester-like hero spent his time flying through a world of dreams along an essentially 2D path, speeding and looping through rings and crushing enemies using a high-speed ‘drill-dash’ attack or cool ‘paraloop’ manoeuvre. Nights didn’t have anything like Mario’s revolutionary 3D worlds or open gameplay, but it did have a mysterious main character, a quirky, dreamlike story, eccentric bosses, and – most of all – the graceful, flowing nature of its flight. On release, Nights came bundled with an all-new analogue pad, and that totally made sense. No digital D-pad could pull off such acrobatic loops and twists. 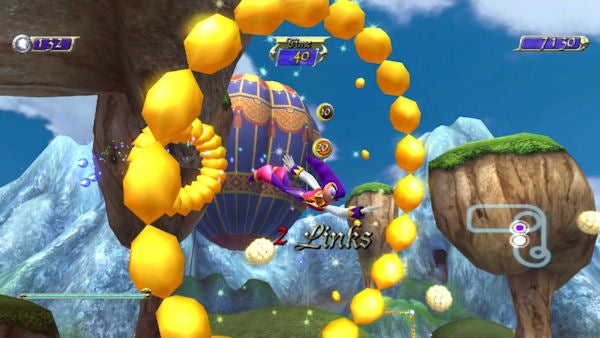 Now, you might think that, launching on the Wii, the long-awaited sequel would use the system’s innovative controller to take that feeling one stage further. Has the Wii remote been harnessed to send Nights swooping, turning and soaring, perhaps in full, free-roaming 3D this time around? In a word, no. In the flying sections of the game, Nights behaves pretty much as he always did, flying on a preset, 2D plane along a trail of rings and orbs. At times the game does take on an into-the-screen 3D view, but these work in pretty much the same way as in the 3D Sonic games – as quick, spectacular scenes that offer limited player control or scope for manoeuvre. 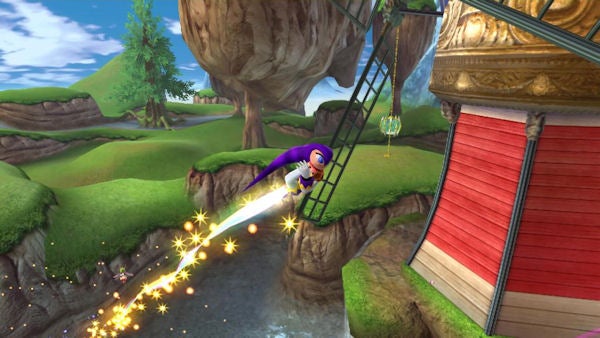 Sadly, the implementation of the Wii controller is a disaster. Using the remote as a pointer, you control a cursor on the screen which steadily drags Nights towards it when you press A. This works reasonably well when you’re just flying in a straight line, but try pulling off complex aerobatic combos or even staying on path when the camera suddenly shifts perspective – which it does – and the system simply isn’t responsive enough to cope. Anyone with any sense will rapidly switch to the Nunchuk option, which uses the analogue stick to steer and the buttons on the remote for the drill-dash. It’s a bit dull, but at least it works.

Now, let’s be clear; while it’s disappointing that Sonic Team hasn’t found any inspiration in the last decade to take the core Nights gameplay to a new dimension, the flight can still be very enjoyable. Once you’ve grasped the controls, looping and dashing in, through and around the hoops can be exhilarating, and there are sequences – like a chase through a dream-world theme park – where the game feels brimming with promise. Masks, which give Nights the ability to transform and swim underwater or ignore winds, are a nice addition, and some levels incorporate some strong ideas. If Journey of Dreams had concentrated on the flying sections, we might still have wished for something more innovative, but at least we’d have a Nights sequel that kept the faithful happy. 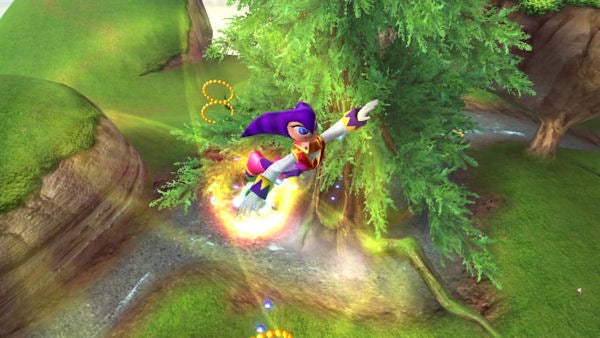 Instead, we have one that seemingly goes out of its way to spoil things for you. Some of it comes down just to characterisation – the original game also had a boy hero and a girl heroine who connected up with Nights in the world of dreams, but the new recruits, their voices and their plotlines are so hideously twee that anyone above the age of eight will gag. This might not be such an issue if only the game were not so jam-packed with endless and frequently unskippable cut-scenes. Worst of all, Nights him/her/it-self has changed, developing a preppy female voice and an irritating persona that instantly removes that air of mystery. Anyone, from six to sixty, can play Super Mario Galaxy and get won over by the game’s sheer charm. Nights: Journey of Dreams, is not a game that you, as a grown adult, want to play. 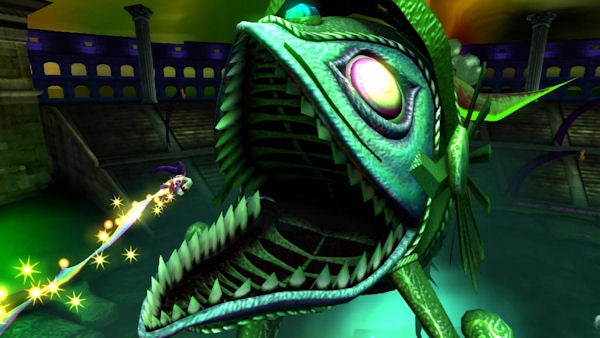 Still, it’s a good game for the kids, right? Wrong. There are structural issues at work here, too. Basically, you play through the main story from the perspectives of the two children, playing first as one and then the other through three dream worlds apiece, then meeting up for a final showdown. Each world is split into five missions, and this is where things go rapidly downhill. A world begins with a sequence where Nights must chase three flying villains to get three keys to unlock three prisons, then beat a boss battle. The boss battles are good looking and actually packed with nice ideas, but at the same time they can be, initially, very confusing. What then makes them irritating is that, should you fail them – often because you simply can’t work out what convoluted sequence of steps you’re meant to manage within a strict time limit – you then have to repeat not just them, but the whole preceding chase sequence as well. 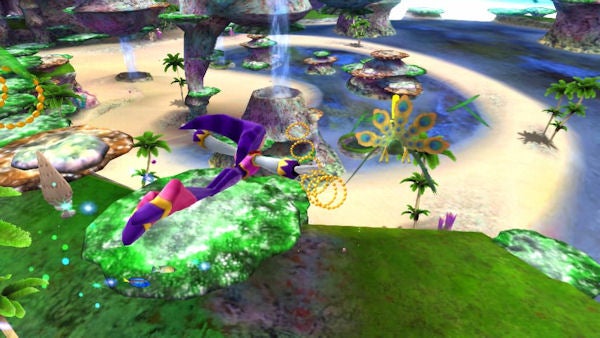 And the problems don’t end there. After completing the boss battle, you then have three missions to complete before a second and final boss battle. This is basically a more convoluted version of the first boss battle, and as such leaves you with a) a horrible feeling of deja vu and b) the knowledge that you’re going to have to follow an even more convoluted sequence this time around. 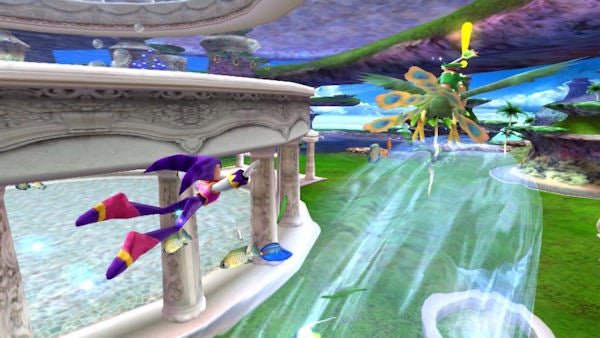 This isn’t good, but the really bad news is that the missions in between are a real mixed bag. The best feature Nights just doing what he/she/it does best – flying. The okay ones feature Nights performing some dull task -gathering bubbles or saving little critters, but at least they’re over fairly quickly. The worst feature the kids in the most tiresome platforming levels imaginable, where only the thought of having to repeat them should the time limit expire will spur you on to victory. I’m really hoping that one section in a mirror-maze will be the most depressing bit of game I play this year, because I honestly don’t think I could play through anything more glum and soul destroying. 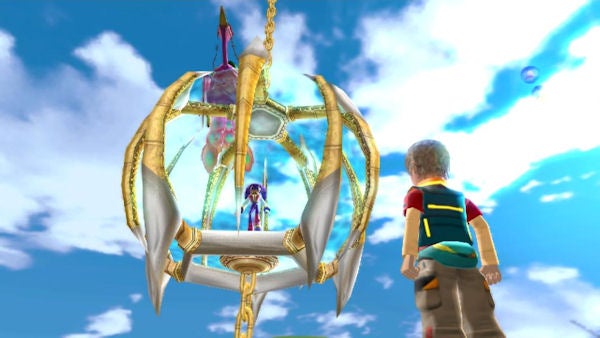 So on one level Journey of Dreams shows a worrying lack of imagination and general game design finesse. On another, it just seems hopelessly patchy. The difficulty level veers all over the place; one level you’ll crack in two minutes on your first attempt, another you could be stuck on for half an hour or more. Graphically, too, it’s inconsistent. Some of the worlds show the sort of strong colour and rich imagination that used to be a Sega hallmark, but there are times when you’ll stand aghast at the drab textures, ropey models and poorly rendered scenes that Sonic Team has shuffled out there on the screen for all to see. From the team that bought us Sonic and the Secret Rings and on a machine that can produce Super Mario Galaxy and Metroid Prime: Corruption, this simply isn’t good enough. 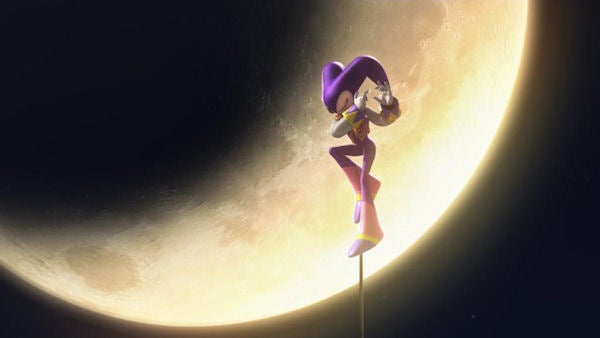 I wanted to like this game, but even the little artificial life side-games and half-baked multiplayer mode can’t bring me round. I bought the original on Japanese import before release, and Nights is one of the few good memories I have of Sega’s whole Saturn era. But the simple fact is that Journey of Dreams is a game I’ve had to push myself to play more of when my only real impulse has been to give up. It’s one thing not to be innovative, but to release a game that’s flawed, frustrating and surprisingly lacking in polish is something else. In the end, I wish Sega had just left Nights alone – and what could be sadder for a fan after eleven plus years than that?


A long-awaited sequel that’s guaranteed to disappoint the adult fans. However, even kids will get annoyed at the many flaws and frustrations found within. Avoid.