It’s a miracle how well received NieR: Automata was when it first launched for PS4 and PC in 2017. Sure, director Yoko Taro’s experimental sequel had PlatinumGames behind it, but following on from a narrative buried in heaps of additional games, drama CDs and stage plays meant that finding investment wasn’t easy.

Despite this, NieR: Automata has sold millions of copies and cemented itself as one of the generation’s finest experiences. And now, it’s come to Xbox One and looks better than ever. 4K resolution and HDR bring a shine to Automata’s world previously unseen, meaning newcomers and veterans can dive into the best console iteration out there. 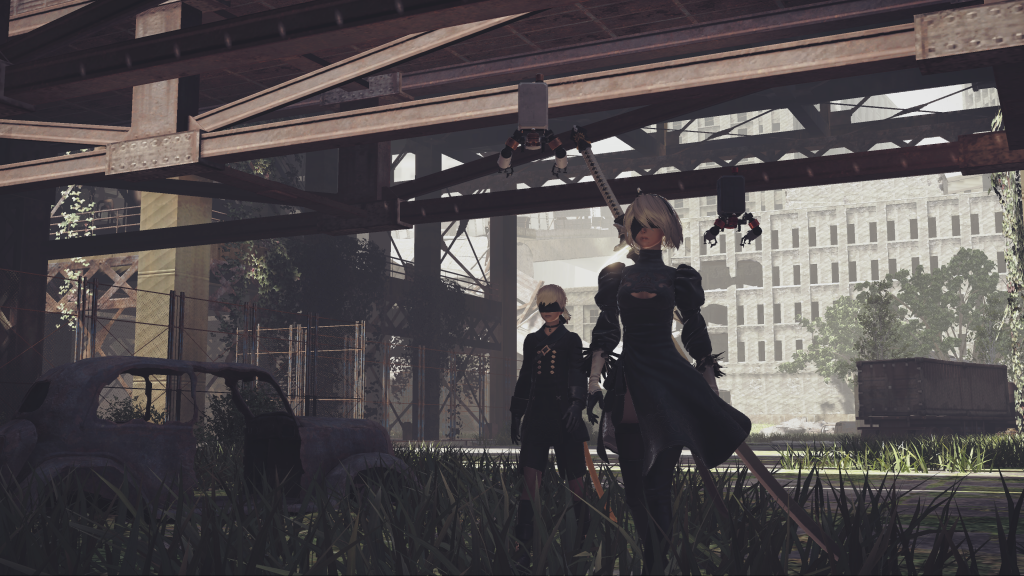 ‘Become As Gods’ Edition is the initial release, alongside a single pack of downloadable content including new combat challenges and a trio of excellent costumes. They’re difficult to obtain, purposely engineered to give endgame players a hard time with specific trials to overcome. If you’re a hardcore fan looking for more, don’t go in expecting an excess of goodies. That being said, it’s worth another playthrough regardless.

Taking place in 11945 AD, NieR: Automata presents a post-apocalyptic world where nothing is left. Humanity has long fled its broken home after a hostile alien race of machine lifeforms invaded, destroying everything in its wake. Emotionless androids have been tasked to take the planet back, and that’s where our playable characters come into the fold.

2B and 9S – lacking actual names because they’re basically cannon fodder – are entrusted with eliminating the alien threat alongside countless others, although their journey throughout NieR: Automata goes far deeper than you might expect.

A routine tale of ‘saving the world’ turns into a dark, twisted and emotionally poignant narrative that explores the nature of humankind and what it really means to feel emotions, whether you’re a machine, android or something of flesh and blood.

In short: it’s brilliant. It takes you on a journey that can only be achieved through the medium of gaming. Consider it a pilgrimage of harrowing nihilistic existentialism, as personalities you come to love must overcome the greatest of odds put against them.

It’s worth noting that NieR: Automata is split into several chapters, meaning you’ll have to play through things more than once to get the full experience. Don’t worry, though: PlatinumGames is constantly throwing exciting stuff at you, whether it be new enemies, gameplay mechanics or cut-scenes. Heck, some of the story’s most important players aren’t introduced until the 20-hour mark, so it’s essential you stick with it. 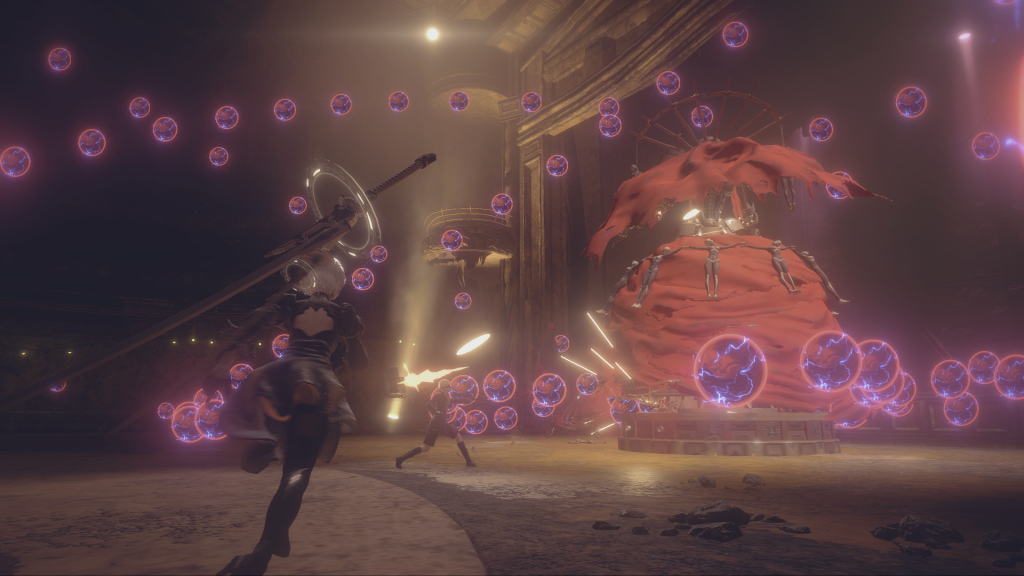 Developed by PlatinumGames, there’s a pedigree of quality we expect from the minds behind Bayonetta, Vanquish and countless other classics. The studio more than delivers, providing a fast and endlessly customisable combat system that actively rewards experimentation.

2B wields two weapons at any given time, meaning you’re free to mix up animations and combos however you like. Most attacks land with a satisfying impact, made even better by a dodge that temporarily slows time if executed correctly. 9S is less capable in scraps, but can instead hack into enemies, partaking in a retro-esque mini-game that either deals damage or brings them to your side for a spell.

A handful of sections have you piloting flight units, blasting robotic lifeforms away in action-packed set pieces that, while trivial, provide a wonderful spectacle. You could argue that these are too easy and outstay their welcome, but I found them to be both integral to the plot and a blast to fight through. On land, you can press the shoulder button at any time to blast foes with bullets, an ability which can be customised, too.

You’ll unlock additional modes of combat as things progress, but they’re so creatively implemented it would be a waste to spoil them here. Oh, and if you’re after a challenge, I’d recommend playing on a harder difficulty, as things are quite easy on the standard setting for the most part.

That aside, NieR: Automata stands proudly alongside the legends that inspired it – and, in some cases, manages to surpass them. 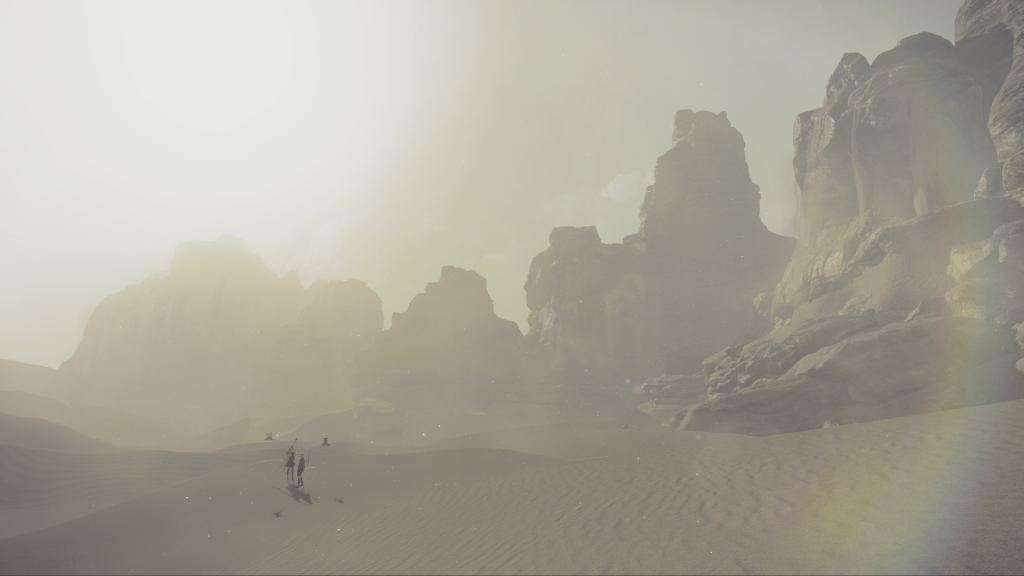 This is a JRPG, a moniker that many associate with giant anime eyes and an abundance of experience grinding. This isn’t the case here. NieR: Automata does an effective job of subverting conventions, something you’ll spot across much of Yoko Taro’s work. Every corner hides a new narrative or mechanical surprise, utilising things you’d consider commonplace in most games as something oddly special.

Androids are made of mechanical parts, so it makes sense that the player would have some agency of how they operate. 2B and 9S are both in possession of customisable chipsets. These influence everything from the HUD elements on-screen to specific attack and defence bonuses. Altering them to conquer specific boss battles or earn additional experience is hugely rewarding, and the benefits only grow as chipsets are enhanced with upgrades. Oh, and remove your OS chip. Trust me, something really cool happens.

Side quests provide valuable insights into the thematic rumblings of NieR: Automata’s world. They’re all superbly written, even touching at times, presenting scenarios of a crumbling world clinging onto whatever hope it can find.

Don’t be surprised if some tasks end in a bleak ultimatum, where nobody is happy. It’s the nature of Automata’s setting, a planet where soon there will be nothing left to fight for.

Humour has a place, too. One early quest has our heroes awkwardly avoiding the explanation of how babies are made to a young robotic child, while another has you trying to hook up two robots across a small village. All of these instances are tinged with an aura of tragedy, subtlety touching upon wider issues with a biting sociopolitical lens. 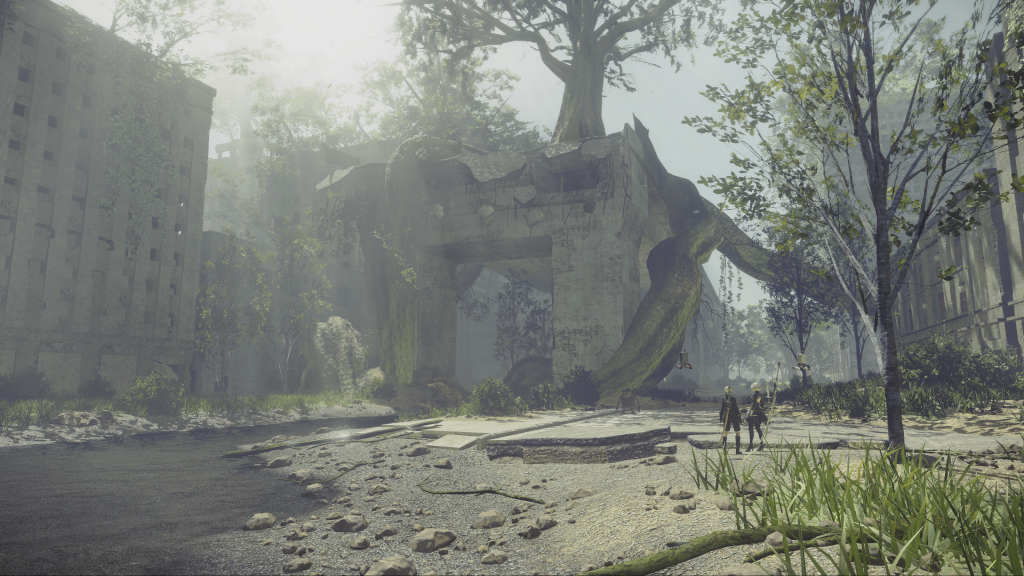 NieR: Automata isn’t a visual juggernaut, but it makes up for a lack in sheer detail with phenomenal art direction. Crumbling city ruins and scorching deserts are brought to life by an equally fantastic soundtrack that provides each and every scene with a musical backdrop bordering on perfection.

It’s really something, and manages to shine a little brighter on Xbox One X with HDR10 implementation. Those with a supported display are in for a treat. Performance is rock-solid throughout, with only a few hiccups emerging in the most hectic of battles.

NieR: Automata remains a fantastic action RPG, bringing an alluring world, compelling characters and a real sense of agency together to craft something I really can’t recommend enough. If you’ve yet to play this gem, the Xbox One is currently one of the best places to do so.