I first played the original Nidhogg projected on a 100ft warehouse wall at a gaming party in Shoreditch. Why have I felt the need to tell you this? Simply because that was almost the perfect introduction to Messhof’s madcap indie stab-’em-up. The game was characterised by its tug-of-war gameplay, perfect for dropping in and out of and great fun to play with a bunch of people. This sentiment still rings true for its sequel.

For those unfamiliar with the original, the game amounted to two players (or one player against the CPU) attempting to murder the other, in what was very similar to the beautiful sport of fencing mixed in with genuine murder. With your opponent vanquished, you were free to then dash as quickly as possible across to the other side of the screen to progress. Your opponent will eventually respawn and once again try to murder you in order to run in the opposing direction.

Games were characterised by this to-ing and fro-ing as both players attempted to reach the final screen and claim their bloody victory – which, for whatever reason, amounts to being eaten by the game’s namesake: the Nidhogg. 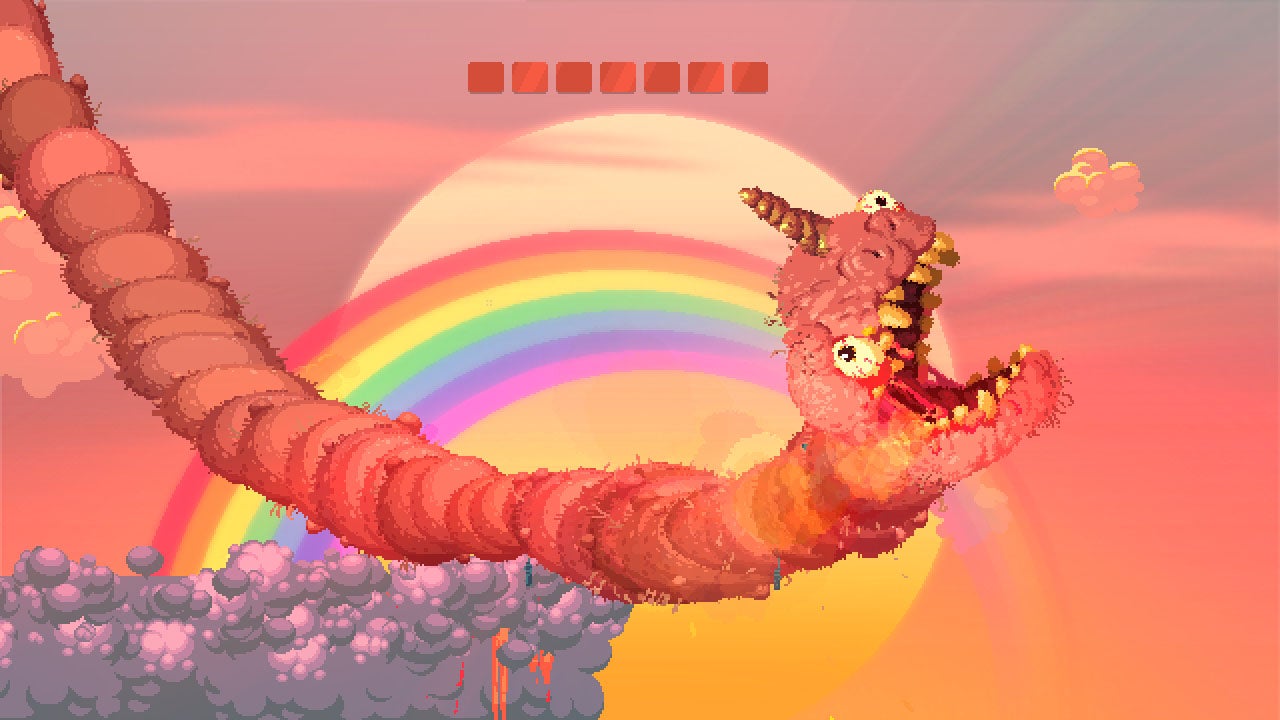 This gameplay remains a constant in the sequel, but there are some major changes introduced in Nidhogg’s return – one is the divisive new art style, which I’ll come to later.

One of the biggest evolutions in the combat for Nidhogg 2 is the introduction of new weapons. Now, beyond the sabre weapon for thrusting, there are new broad sword, bow and arrow and daggers that all perform very differently. The ability to throw your weapon remains, which continues its risk versus reward element; a miss will leave you unarmed. However, instead of throwing punches, your player now kicks, which can even disarm your opponent if timed correctly. This leaves you at slightly less of a disadvantage compared to the original. 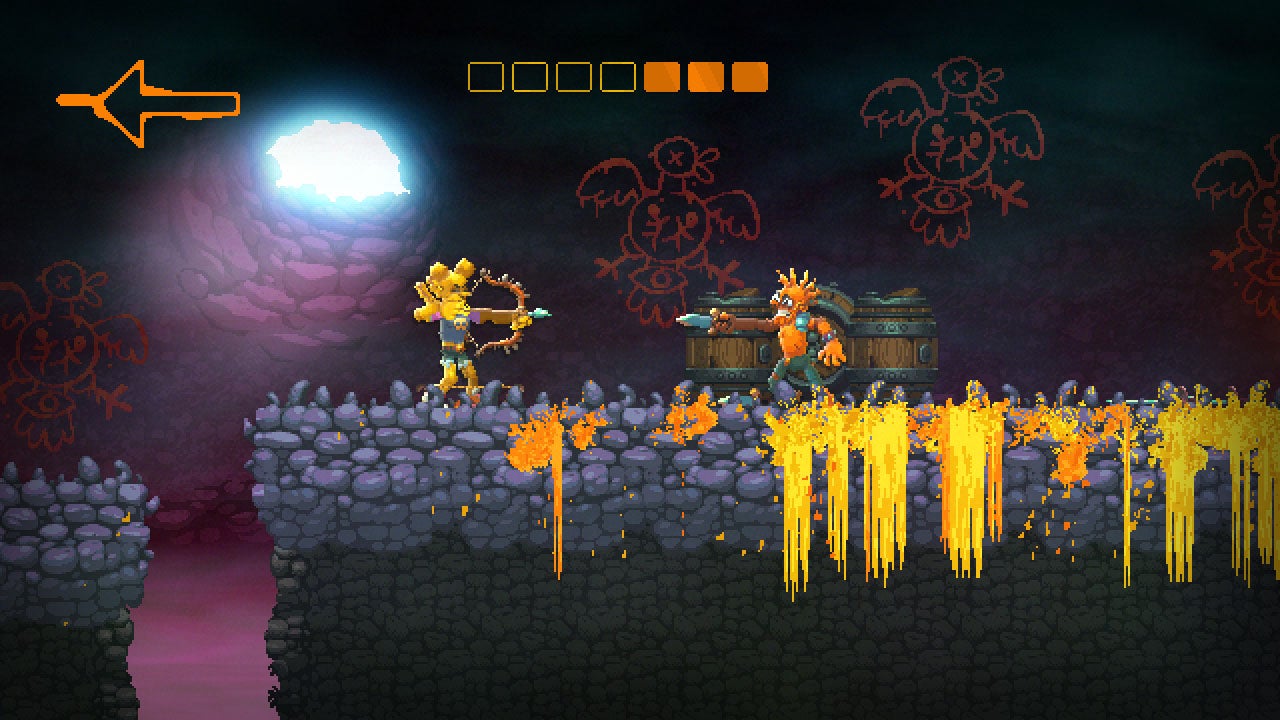 I see you’ve played knifey-spoony before…

I often felt like the new weapons didn’t have the balance and poise of the original sabre, however. In the first Nidhogg, combat could either go the way of spontaneous stabbing or, with two more cautious players, became a more strategic, slow-paced affair. Essentially, you’re able to hold your weapon at one of three attack heights – low, middle or high – which corresponds with blocking. So, a middle thrust versus a middle guard obviously amounts to nothing, resulting in stand-offs where neither player necessarily wants to make the first strike.

Now, with stronger weapons such as the broad sword it’s possible to knock a guarded weapon out of your opponent’s hands, slightly diminishing some of this more cautious play. I felt like the broad sword was a little overpowered in this regard, letting you wade in like Conan the Barbarian. But then in fairness I don’t consider myself a high-level Nidhogg combatant. It will be interesting to see what strategies are devised. 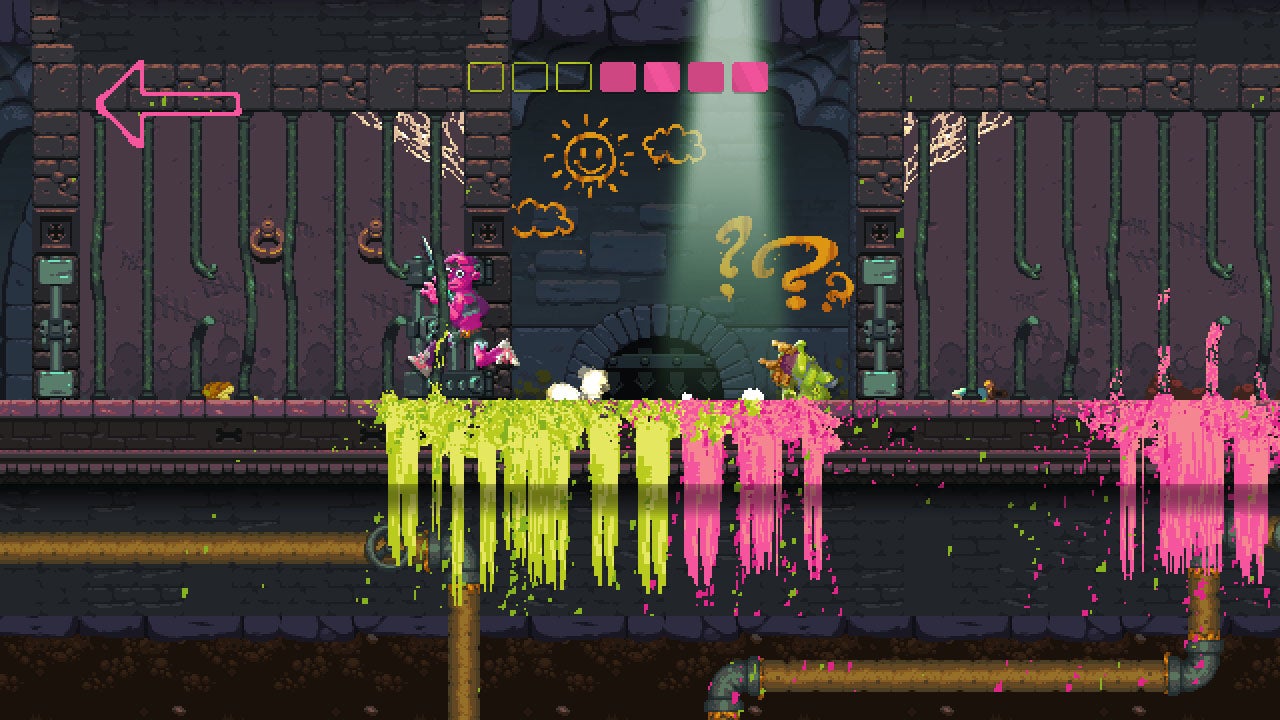 So to the major art style change I alluded to earlier. The original Nidhogg had a distinctive retro pixel-based design that stripped everything back to its basics. It almost reminded me of the stick figure war scenes I used to draw as a kid. But with its more basic graphics, it added an almost balletic beauty to some of the combat through its simplicity. For Nidhogg 2, the art style is similar to something out of the 16-bit era of the SNES and Mega Drive. This brings with it a vast colour palette, more detailed backgrounds and superior animation. It also brings with it Nidhogg 2’s divisive character designs.

Gone are the single-colour pixel figures, replaced by characters that remind me of some of the designs from ClayFighter on the SNES. If you’re thinking googly-eyed, doughy figures then you’re on the right track. There’s a basic character creation tool before you start a fight, or you can just create one at random, but I was never fond of any of my Frankenstein creations. This is obviously subjective, but I never stopped yearning for the more simple designs of the original. 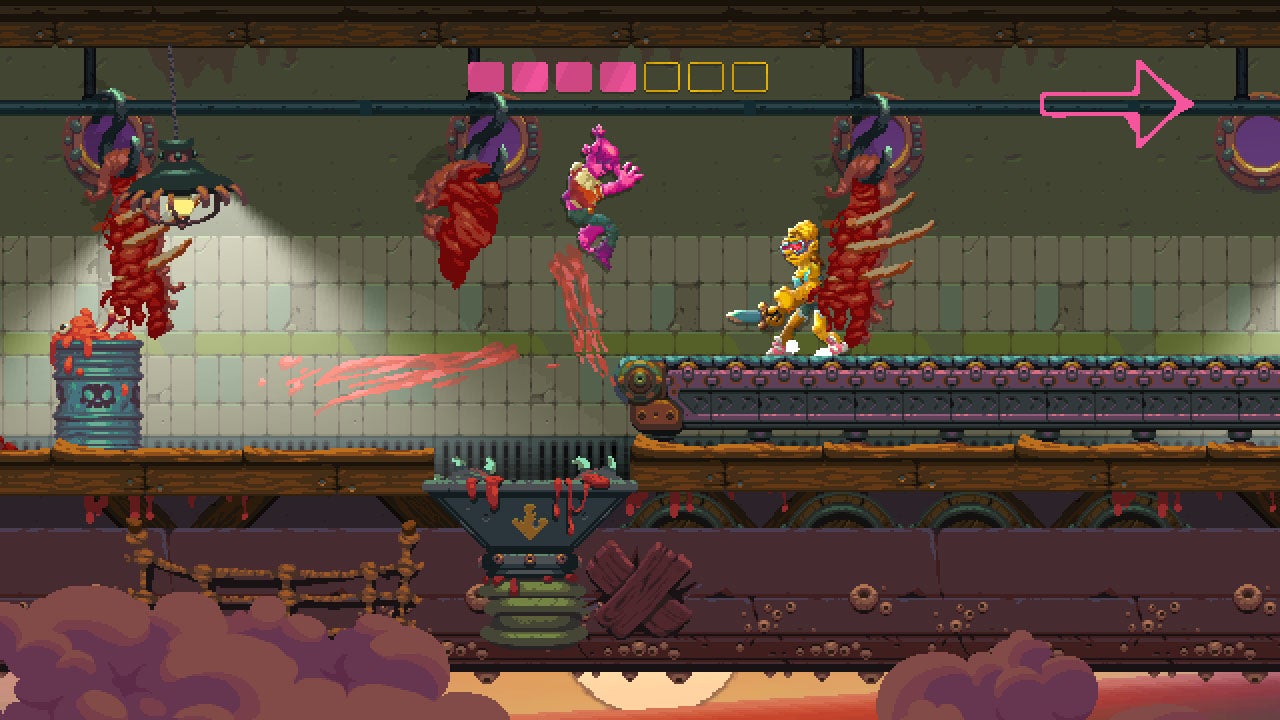 But what the more detailed graphics allow for is variety in animation, dialling the violence up to 11. Now when you curb-stomp your downed opponent, it makes quite a mess and entrails are left in your murderous wake. Slash with the broad sword and guts fly everywhere. I can totally understand why a change was necessary, Messhof said it had reached the limitations of the previous design, I’m still just not fond of the ultimate delivery for the new characters. 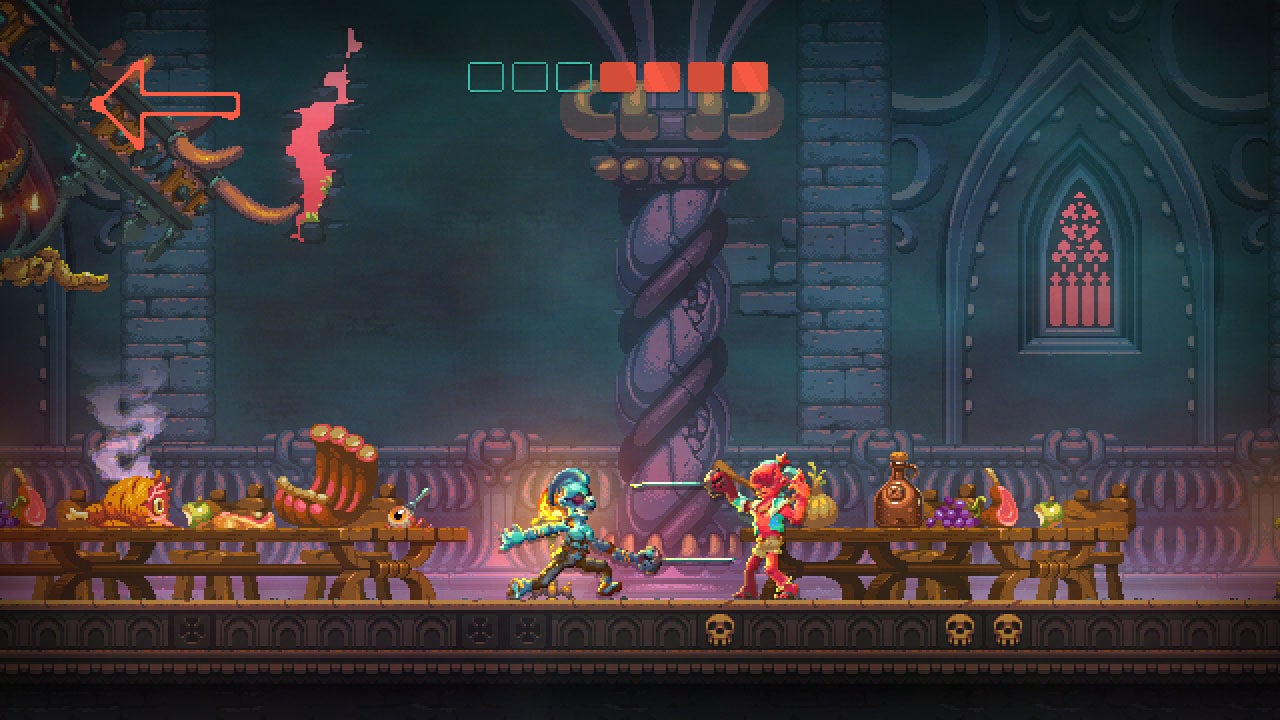 The level design is much more varied as a result of the graphics revamp, too, taking you from airships to underground dungeons to swamp grounds and beyond. In a neat homage to the 16-bit era, the level select screen is a call back to Yoshi’s Island from the SNES, which filled me with nostalgic joy. While each level has a distinct look and feel, but can still feel a little lifeless with objects and items that you can’t actually interact with, even though it might look like you can. Some of the music is great, however, and really heightens the tension in the game.

While the new art style is divisive, it brings with it improved combat and animations, making Nidhogg 2 great for multiplayer madness if you can gather together some friends in-person or online. However, as a single-player experience the Arcade mode quickly loses its appeal. Still, if you’re looking for your next pick-up-and-play party game, Nidhogg 2 can be a hoot.