So it’s a slightly inauspicious start, but nowhere is the Nexus Player’s (and Android TV’s) potential clearer than when watching YouTube. Despite years of Smart TV apps and TV attempts, YouTube finally works well on a TV – no surprise that it’s taken Google to make it work.

That initial content stream plays a part here. Browsing YouTube’s anarchic variety of videos is the on-demand equivalent of channel surfing, and Android TV’s homescreen invites you to dive right in from the moment you switch the Nexus Player on. It’s perfect when you just want some quick entertainment – I’d like that main recommendation stream to be larger, actually, but perhaps that’s just me.

Once in the YouTube app, it’s easy to navigate to new videos from your favourite channels or discover new ones. The main screen mixes your channels with others Google thinks you might like, while a separate stream shows the latest videos from channels you subscribe to.

What makes this all work is how the app seamlessly starts another relevant video right after the first finishes. You rarely have to stop and search for something new unless you really want to, and it’s easy to see alternatives if you don’t like the current video – just press down on the remote to see more alternatives.

The way many YouTube channels have matured to produce longer, more interesting shows means you can lean back and enjoy a more TV-like experience. For all its current wrinkles and issues, the Nexus Player is a great advert for how YouTube could be at the centre of TV in the future.

The fact you can enjoy YouTube without the comments section is worth the admission price alone. 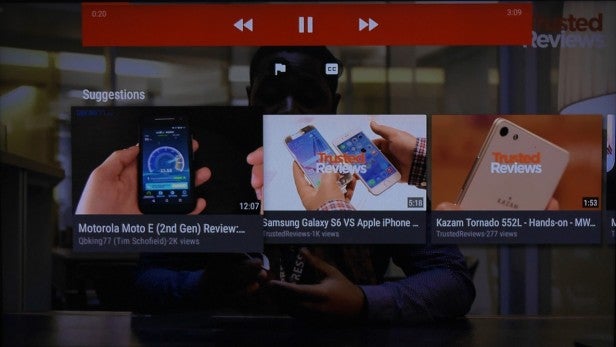 The other core components of the Android TV experience are the voice search system and Google’s other two Play services, Movies & TV and Music.

Movies & TV works fine. The fast seeking is particularly slick – hold the direction you want to go and it shows screenshots in a scrolling filmstrip. This isn’t hugely different to how rivals do it, but Google’s version works better than most. Unlike Music, the Movies & TV service is a rental and purchase experience, so all the latest shows and films are on there.

Google Play Music, however, is a subscription service and a very good one – I recommend trying it if you’re a Spotify, Deezer or Rdio user already. Its key feature is the option to upload and match music from your online collection – it’s like iTunes Match, but with the added benefits of a streaming service tacked on.

Just don’t try setting up your account on the Nexus Player – not because you can’t, but because it doesn’t work properly. If you try, you’ll eventually reach a screen that asks you to select your favourite genres. It’s impossible – in my experience – to advance beyond this stage. (No matter what I did, I couldn’t select the ‘Next’ button to move to the next stage – see the below video for evidence.)

This isn’t the only baffling quirk. It crashes sometimes when trying to access the smart playlists, there’s no way to seek through a track like you can on videos, and it exposes a few limitations and oddities that need sorting out.

One is the sometimes confusing behaviour of the Back button. For example, select the Now Playing option on the homescreen and you have press Back several times to return to the main menu of the Music App. Moreover, sometimes it will take you back to the homescreen instead, and occasionally to the last app you had open before it – probably due to pressing it too many times in frustration.

The Music app also highlights the stupidity in not having Next/Previous buttons on the remote. You can’t skip to the next track using just the left and right controls – you have to select the on-screen controls. This also means it takes three or four button presses to skip a track when the screensaver activates while playing music. That’s -10 for good thinking, Google. 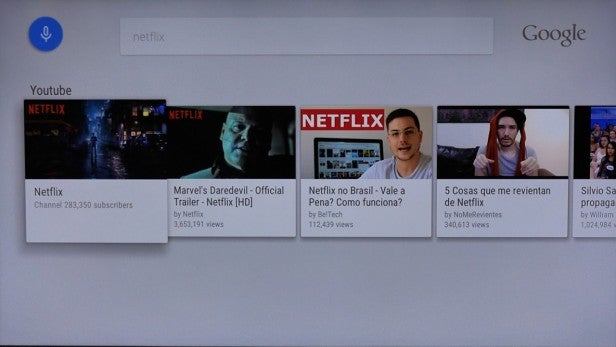 Voice search, by comparison, works well despite being slightly limited at the moment. Search for an actor or band and it’ll show you a short bio and related content, including results from YouTube. It’s accurate 95% of the time, provided you don’t garble your words.

The only big issue is that it doesn’t support universal search of non-native apps like the Roku 3 does, though we’d be surprised if it wasn’t high on Google’s to-do list. You also can’t set it to play music using the Music app – say “play Oasis” and it’ll stream videos from YouTube. It’s not a huge problem, but the option would be nice. 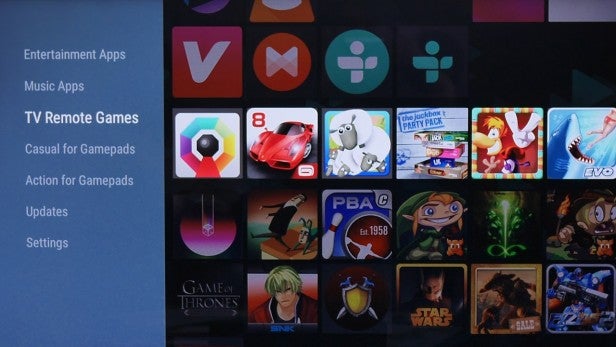 The final element we must touch on is gaming. But if Android gaming on your TV interests you then the Nexus Player isn’t the place to start. Notwithstanding the storage issue covered earlier, it’s underpowered for anything other than the most casual games.

Its Intel Atom CPU, PowerVR Series 6 GPU (launched in 2012) and 1GB RAM struggle with demanding games such as Asphalt 8: Airborne – it drops frames from time to time and lacks the sense of speed to make it exciting. We can live with that given it’s priced to be accessible – the Nvidia Shield will be the gaming powerhouse of Android TV – but investing in the controller is unnecessary. The remote works fine for casual games.

Gaming does highlight one final Android TV issue, though, and that’s how Android TV and “normal” Android often clash, with jarring results. Ad-supported games are especially problematic. It’s beyond irritating when a random video or pop-up interrupts. What works on mobile doesn’t work on a TV, so developers need to adapt their approach to Android TV. Whether they will depends largely on Android TV’s long-term success. 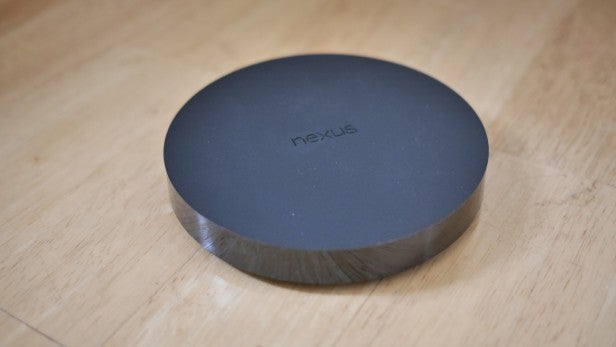 Should I buy the Nexus Player?

Only if you really want it. There’s plenty for Android users to enjoy here, particularly if you crave a serious YouTube-on-TV experience. The Nexus Player proves beyond any doubt that YouTube has a huge say in how and what we watch on TV in future.

But there are too many niggles and limitations to recommend it to everyone. Rivals beat the Nexus Player on performance, app selection, gaming and even ease of use. If we were buying a streaming box right now, the likes of the Roku 3 and Fire TV would get our vote. Moreover, even if you’re desperate for an Android TV box, we suspect better examples aren’t far off – the Nvidia Shield is one such example.

Bottom line: it’s worth it for Android fans, but everyone else should wait and see how it develops and how Apple responds later this year.

A promising debut spoiled by niggles, but it’s still by far the best way to watch YouTube on a TV.