We’re not going to deny it – we’re a little late with this one. In fact, Google has all but discontinued the Nexus One. Nonetheless, enough of you have clogged our inboxes and comments sections with requests to give the device a once-over that we’ve conceded to popular demand. Better late than never, right? We’re hoping so.

Although Google has given up selling the Nexus One itself, the handset is still available to buy from Vodafone and SIM free from online retailers. Most reckon this announcement by Google to be the signing of the Nexus One’s execution warrant, but that’s not to say now isn’t the opportune moment to snap one up while available. Especially as a price drop isn’t inconceivable in the wake of Google’s announcement.


Naturally, we’ve loaded this particular Nexus One with the latest version of Android – 2.2 if you prefer numerals, Froyo if you don’t. This features the plethora of small tweaks and improvements we’d expect from an incremental update, as well as one particularly headline-grabbing addition: mobile Flash. This is provided as a separate download from the Android Marketplace, so in theory it could be made available to previous versions of the OS, but for now you’ll need Android 2.2 to get it. 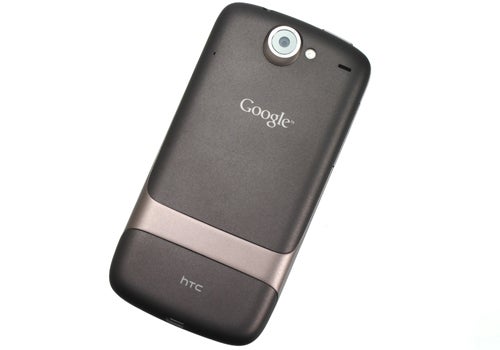 Knowing that Google won’t be selling the Nexus One itself any more, we’re wary of assuming it will remain the first device to get Android updates in the future, but as it runs the OS without third part ‘improvements’ it should at least be among the foremost devices to see future releases. We know it will be able to run Android 3.0 (Gingerbread) at any rate. This makes it a good option if you want to be at the cutting-edge of Android software releases for the foreseeable future, and why we’ve decided to look at it even at this late juncture.

Considering its position as the only Google-branded Android handset, it’s hardly surprising that the Nexus One hardware is good. Google’s choice of manufacturer, HTC, is no stranger to making quality handsets, and the Nexus One is definitely among the best, striking a fine balance between style and functionality. This, of course, is something of a modus operandi for Google.


Unimposing it may be, but the Nexus One is far from unattractive. With its combination of metal and soft-touch plastic and curved edges, it resembles an iPhone 3GS in many respects. The dimensions are similar too; the Nexus One measures 119mm x 59.8mm x 11.5mm and, subjectively, feels very nice in the hand. In fact, it’s arguably nicer to hold that an iPhone 4 – and there’s no wrong way to do so. 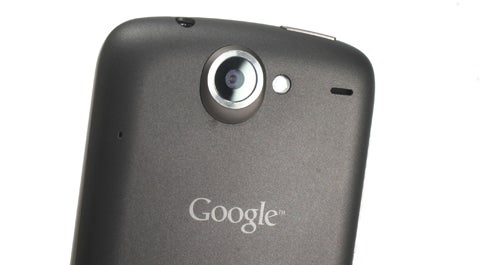 No complaints can be made of the physical buttons – power up top, and a volume rocker on the left edge – but the touch-sensitive controls below the display are pretty poor. We frequently found our presses going unregistered, requiring a stronger prod than many physical buttons, making the slight vibration the Nexus One offers as confirmation of a registered press somewhat pointless.


The trackball is a mixed bag of good and bad points. We like the use of different coloured lighting to represent varying notifications, and the click action has a nice tactile feel to it. However, the sensitivity is far too low for our tastes and it’s not often when using a touch-driven interface that we find ourselves thinking: “if only there was a more cumbersome way to emulate this intuitive input method with an ungainly physical control.” 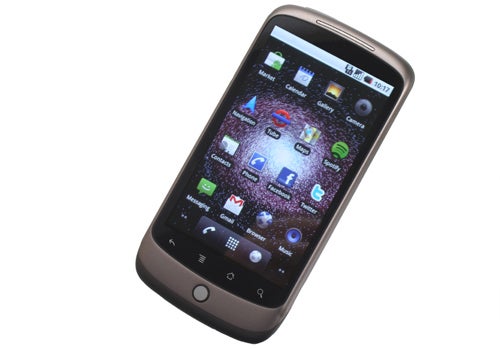 Foraying around the rear of the Nexus One reveals its camera, a five-megapixel affair with an LED flash, also able to capture 720 x 480 pixel video at 20fps. Up top is a headphone jack and down below is a micro-USB port, flanked by metal pins which let the Nexus One interface with a docking station – particularly useful if you plan on using the Nexus One in a car as a sat-nav.


Under the bonnet, so to speak, is the Nexus One’s removable battery (take that, iPhone!) which has to be disconnected to get at the SIM and micro-SD cards slots. As the Nexus One has an almost-negligible 512MB of internal flash memory, you’ll likely be storing all your downloaded apps on a memory card, so ensuring its left in while the phone is on is probably a good move, for once.

Consistent battery life isn’t a mainstay of Android use, as longevity is dependant on how many apps you run, and leave running in the background. Using Google Maps’ built-in navigation, for example, is a sure fire method for killing a fully charged battery on no time and streaming music from Spotify over 3G doesn’t do too bad a job of sucking power, either. 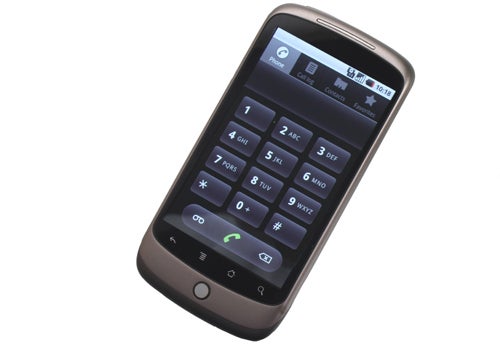 Knowing that it’s possible to drain your Nexus One of power in almost no time at all is a small price to pay for being able to leave apps running in the background, though. Realistically, you’ll be charging up every night with normal use and resorting to the an occasional midday top-up should you really stress the Nexus One’s 1GHz ‘Snapdragon’ Qualcomm CPU with too many tower defence games. This is entirely on par with just about every smartphone on the market at the moment, so we’ve no complains against the Nexus One on these grounds. 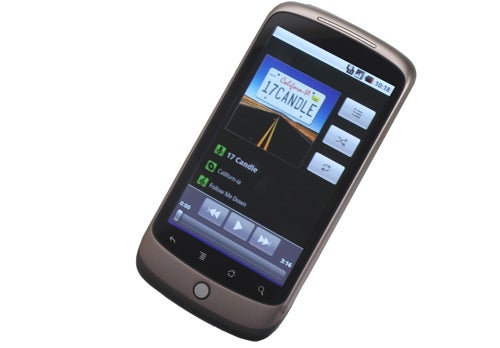 Strangely, the Nexus One’s display isn’t the sharpest-looking we’ve seen, despite an 800 x 480 pixel (WVGA) resolution, which matches rival handsets, such as the Samsung Galaxy S. This seems to be a side effect of the PenTile matrix arrangement of sub-pixels in the screen. It’s not enough of a problem to make the Nexus One unusable, by any stretch of the imagination, but some users might find the slight hazy quality annoying.


Holding the fuzzy pixel issue aside, the Nexus One’s display is to be applauded for its viewing angles, which are superb, but dare to venture outside with the Nexus One and the display may as well not be present. Fortunately mobile phones are rarely used while out and about, so this shouldn’t prove at all problematic! Colours aren’t as saturated on the Samsung Galaxy S, but the AMOLED display is still characteristically over-vivid. The TrustedReviews homepage was rendered a particularly radioactive shade of orange. 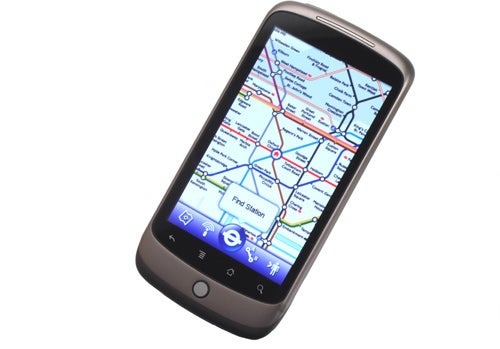 Interacting with Android through the Nexus One’s touchscreen is a frustration-free experience. The display seems responsive and accurate; we found the on-screen keyboard to be perfectly useable, once we adjusted to it. Android’s auto-correction still isn’t quite on par with that of Apple’s iOS, but for quick emails and the odd SMS it’s perfectly sufficient. Apps run expectedly fast, with the Nexus One’s 1GHz CPU never appearing phased by the demands made of it.

The few issues that do arise with the UI aren’t the fault of the Nexus One specifically, but rather derive from Android. The interface still doesn’t have the same sense of coherence that iOS exhibits, nor is there the same level of visual flair – even Windows Phone 7 looks set to trump Android in that regard. We’re more than prepared to forgive this lack of polish in exchange for Android’s notifications implementation, though. The simple, but very functional drop-down list works brilliantly, and augments Android’s multitasking ability into a much more usable affair that it would otherwise be. 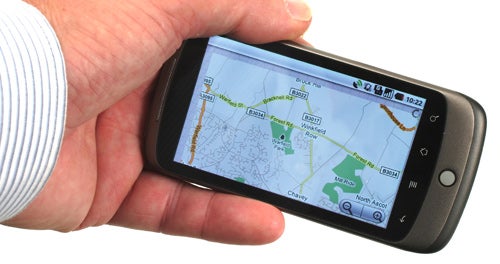 As much as we’re pretty much converted – through out use of iPad’s and iPhone’s – to a web without Flash away from the desktop, we won’t deny that Android 2.2’s inclusion of mobile Flash is very good. Video played smoothly on every site we looked at, and we were able to fully bask in the glory of annoying, garish animations, too. Labelled as a beta it may be, but this is a Google beta, so it’s nigh indistinguishable from production-ready.

Really pushed to find fault, we’ll admit we’d prefer it if the browser defaulted to not displaying Flash elements until asked to, or at least offered that functionality as an option. That niggle aside, Google’s initial implementation of mobile Flash on Android gets our unreserved applause. 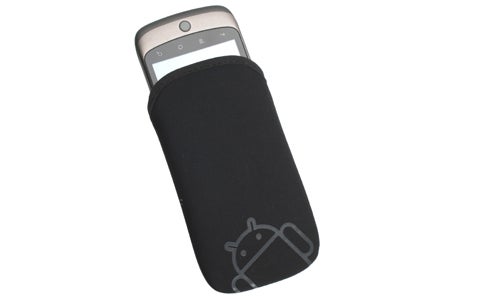 Somewhat raining on this parade, however, is the knowledge that the Nexus One isn’t anything special. Competent, well made, attractively designed, the Nexus One is all of these things, but so are a number of other Android devices. In fact, the HTC Desire might almost be called the Nexus Two. But the real issue is pricing. As much as we’d like to think the Nexus One will get cheaper, at the moment it’s more expensive than a Desire or a Galaxy S. And they’ve not been abandoned by the companies selling them.


Even though Google isn’t planning to sell the Nexus One itself any more, that shouldn’t be considered a poor reflection on the handset. The Nexus One is a great pairing of the best version of Android yet and excellent hardware. If you can pick one up for cheap in the wake of Google’s decision to cease selling the Nexus One directly, you’ll not be disappointed, but for the moment it’s a little pricey for all but hardcore Android devotees.