The Nexus 9 has an 8.9-inch screen. That’s a fair bit smaller than the 9.7-inch iPad Air, but it still feels much, much larger than the Nexus 7 – far closer to the iPad’s league.

What’s important to note here is the screen shape. A 4:3 aspect isn’t so hot for widescreen movies, but it’s great for just about everything else. Browsing, (most) gaming and a great many kinds of apps feel more at-home on this shape display.

Unlike an iPad, relatively few Android apps will have been made with this squatter screen shape in mind, but then most are created with a great deal of scaling versatility in mind: they have to cater for screen from three inches to 23 inches, or even more when you factor in things like Amazon Fire TV. 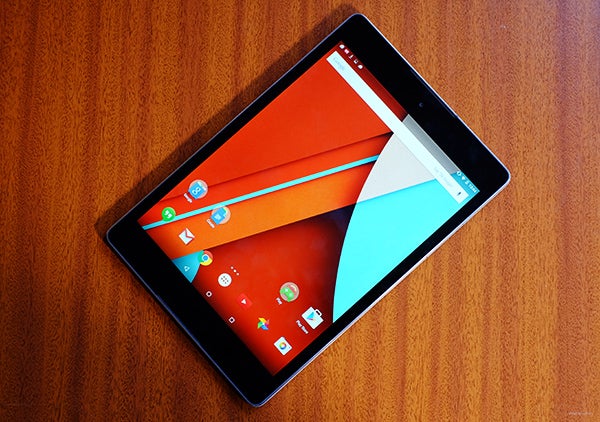 We love the shape, and while the extra portability of the Samsung Galaxy Tab S 8.4 is handy, a straw poll of the Trusted team sees most of us side with the squatter Nexus 9 style.

Thumbs-up for the screen style, but how are its tech chops?

It’s enough to ensure you get nice, sharp images and text. Pixel peepers will be able to see a wee bit of jaggedness right up close, but if that’s an issue, get the higher-res Galaxy Tab S 8.4 or an iPad mini 3. Or, more to the point, get your priorities in order.

There are issues with the Nexus 9’s screen but a lack of resolution is not one of them. 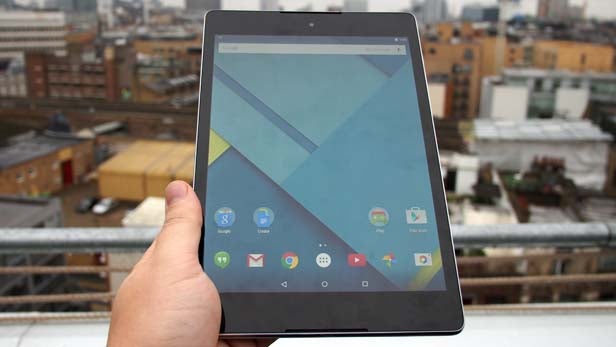 The first thing you might want to worry about is black level. It’s decent, but only for an LCD screen. This wouldn’t have been an issue to raise until recently, but Samsung’s Tab S tablets offer reasonably priced, high-quality AMOLED screens that let you opt out of the insanely saturated colours that used to come as part of the OLED package. These screens offer much greater contrast.

We think it’s only seriously worth worrying about if you’re going to watch films on the tablet in lower lighting.

Any lack of contrast or limit to the black level is a symptom of an IPS LCD screen, not a particular failing of the Nexus 9, though, and IPS comes with benefits too. Colours are excellent — vibrant without being remotely radioactive (as the Samsung Tab S tablets are in multiple display settings) and viewing angles are good.

There is the odd sign that this isn’t a real top-notch screen in QA terms, though. First there’s fairly significant backlight leakage at the top of the screen. This is basically where you can see the effect of the side-firing backlight LEDs, making one edge of the screen significantly brighter than the rest of the display.

It’s a fairly common occurrence, but one that we’re disappointed to see so clearly in a tablet of this grade. 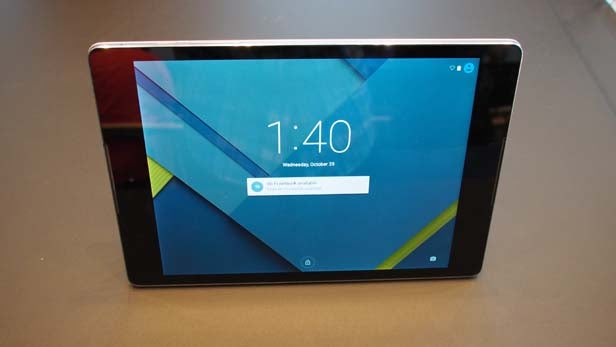 Our particular Nexus 9 sample also suffers from a spot of backlight bleed. This is where parts of the screen are lit-up slightly more than others, another form of backlight leakage. It is only very minor, though, and unlikely to be noticed unless you like staring at screens of dark greys and have — like us — acquired a certain degree of irritating tech pedantry.

Despite its issues, the Nexus 9 screen is certainly one we’d happily watch films on. Just make sure that backlight leakage isn’t going to get on your nerves too much.

The front stereo speakers are an obvious choice for movies too. Coming from the HTC design labs, they bear the same BoomSound branding as the HTC One M8 speakers.

These speaker outlets sit at the extreme ends of the Nexus 9, just as the screen cover meets the metal band that rings around the tablet’s perimeter.

We were initially worried that these speakers might be a bit easy to block when holding the tablet, but they’re virtually immune to it actually. Clever internal design means you need to block the entire speaker port for it to have any detrimental effect on the sound, something that can’t be said for the speakers on the bottom of an iPad.

Care-free stereo is a big win for a tablet, and is obviously great for games as well as films.

It’s just a pity, then, that sound quality isn’t quite as on-target. The Nexus 9 tries desperately to offer beefier-than-average sound, but it doesn’t really have the hardware to do this in style. 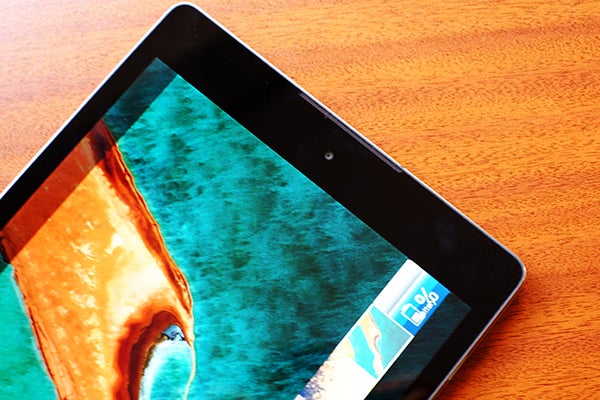 As revealed in the Nexus 9 ifixit teardown, the tablet has fairly small driver units, and you can hear this effect. The output of the tablet is subject to fairly extreme compression and equalisation in order to squeeze as much power out of the tiny little speakers as possible, but it results in rather forced sound that just isn’t particularly pleasant to listen to.

It’s warmer than the tablet norm, which is good. However, we can’t help but feel HTC could have done better. It’s no doubt a symptom of fitting the tablets into such a small front cavity, and potentially a cost issue too.

There are much worse tablet speakers out there, but the Nexus 9 is outclassed by the iPad Air 2, which offers greater top volume and less processed sound.

Audio quality through wireless speakers and headphones is much better. The Nexus 9 supports aptX for higher-quality wireless streaming and the output from the headphone jack is excellent.