What is the Nextbase Adapt DAB350BT?

The Nextbase ADAPT DAB350BT is an automotive add-on that promises to provide DAB radio for older vehicles in which this isn’t option. If your car only has an FM tuner, this could be a more pressing consideration than you think. Norway turned off its FM radio signal in January 2017; the UK is waiting until 90% of the country can receive DAB. With close to 50% already using it, this could be achieved sooner than you might imagine.

According to a report published in the second quarter of 2017 by research firm Rajar, 61% of the UK population now tune in to digital radio. This includes digital television, online streaming and apps, although DAB makes up the lion’s share. In total, 48.7% of all radio listening is via one of these digital platforms.

Looking at growth rates, the specified coverage and the fact that usage proportions could be achieved in 2018, the UK could consider turning off FM as soon as 2020 – although nothing has been announced just yet. Nevertheless, clearly there are reasons to consider a DAB upgrade for your car sooner rather than later.

For your home, you can just buy a DAB radio and get rid of your old FM unit when switchover occurs. But this might not be so straightforward with your car.

The head unit might also offer other functions such as a built-in satnav system, or might otherwise be top quality and not in need of replacement. This is precisely the scenario that Nextbase is aiming to address with the Adapt DAB350BT, since it’s designed to sit alongside your existing in-car hi-fi. 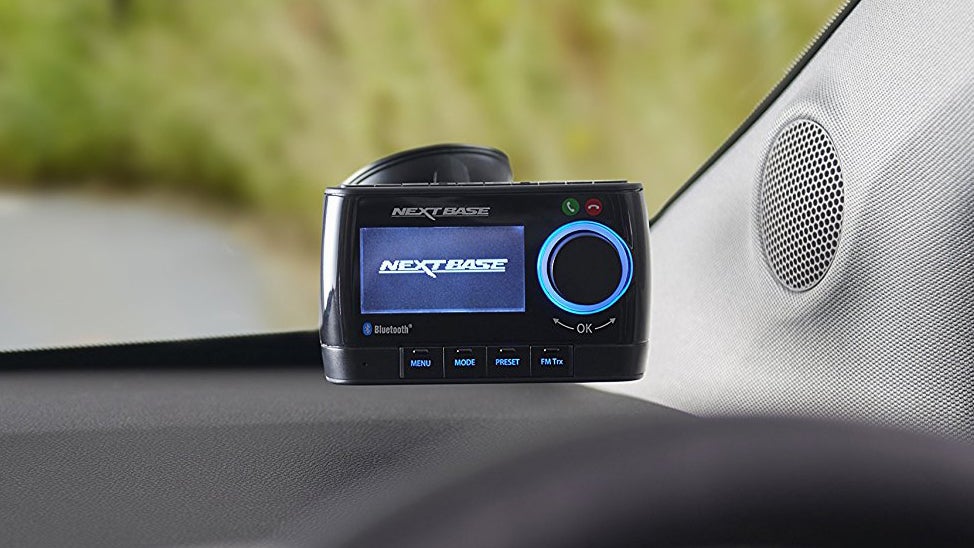 This isn’t the first such unit I’ve reviewed. Some years ago, I put the Pure Highway 300Di through its paces, and was fairly impressed. However, technology has moved on, and although the DAB350BT ostensibly looks similar, it offers plenty of extra features. It’s also quite a bit cheaper than the 300Di – and, for further savings, you can install it yourself.

However, having attempted this myself, I’m not sure this is the best option when Halfords will do it for you for £30. There are quite a few elements to the installation, and achieving a clean, tidy and permanent install took me over an hour. There are at least two cables to route; three, if you use the line input and auxiliary output mini-jacks.

First, you need to install the rather fragile ribbon aerial on your windscreen, and route the attached cable around your windscreen to wherever you wish to place the control unit. This is likely to be centrally on the windscreen, towards the bottom, so it’s within reach of the driver and passenger. There’s also a magnetic ground that needs to be connected to something ferrous. 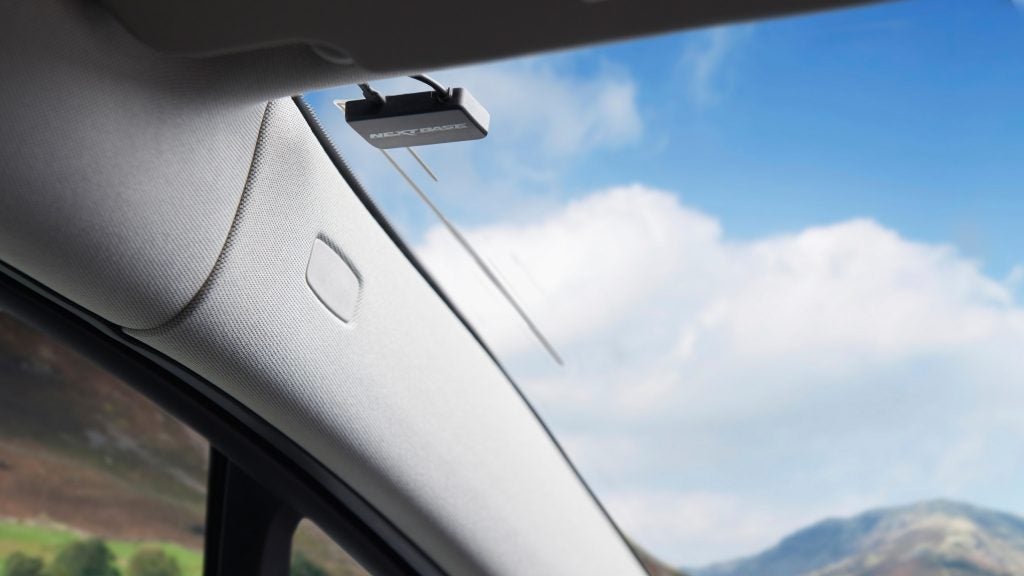 The control unit comes with a suction mount, but there’s a 3M adhesive option included in the box as well. This can also be used to stick the unit to your dashboard. The control unit can be slid off its mount if you want to take it out of the car when not in use. But with two, three, or even four cables attached, and one of them screwed in, this could well be a painful thing to do regularly.

The second essential cable is for power. This is of the same type found with a satnav, using a mini-USB connection to the control unit and a cigarette lighter adapter to the car. Unfortunately, the latter is hardwired, so if you need to power a satnav or phone at the same time, you’ll need to find an alternative cabling option for one of them.

Once the aerial and power are connected, and the cables tucked away neatly, the DAB350BT could be ready to go. There are two ways of sending audio to your car’s existing stereo. The least hassle will come if it has an auxiliary audio input. You can use the supplied mini-jack cable to plug this into the line-out on the DAB350BT.

If your car doesn’t have an auxiliary audio input, however, there’s an alternative way. Simply press the FM Trx button on the front of the control unit, and it will automatically scan for a free FM radio frequency. Once this has been found, it will be displayed, and you can then tune your existing FM radio into this frequency. In general, the quality of this signal is good, but it proved susceptible to RF interference as your location changes, making the wired connection the optimal choice.

Once the DAB350BT is fully installed and connected to your existing car audio system, the next step is to scan for stations. Both DAB and DAB+ stations are supported, so the automated system will be able to receive nearly 300 different stations around the UK. I found this a pretty seamless process, and the DAB350BT picked up 104 stations in the London location I was using for testing. You can re-scan any time, but this happens automatically when you turn the unit on for the first time.

The DAB350BT has three modes: DAB, Aux and Bluetooth. The DAB350BT includes the latter so you can pair your phone with it as a hands-free kit. The control unit has a microphone built in, and your car speakers will be used to listen to your callers. The Aux option simply routes whatever you have plugged into the control unit’s Aux mini-jack to the audio output. 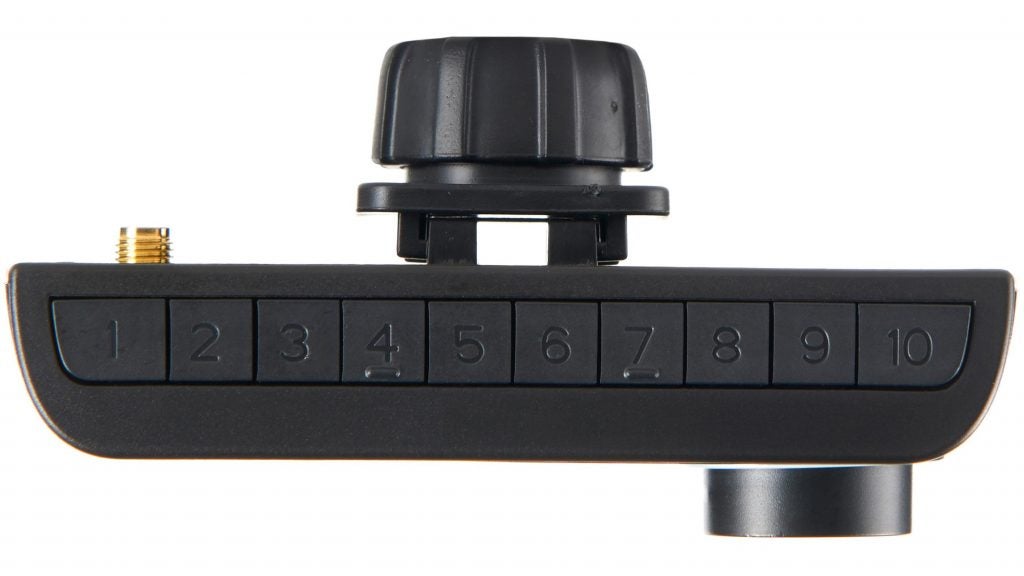 The DAB radio will be your most usual mode, obviously, and this is simply controlled via the big dial on the front of the control unit. Rotate this to cycle through stations, and press it in to select. Alternatively, there are ten preset buttons along the top of the control unit for favourite. This is particularly handy with potentially hundreds to choose from. I found the system simple to use and DAB reception excellent.

Why buy the Nextbase Adapt DAB350BT?

Whether or not you believe that the end is nigh for FM radio, the Nextbase Adapt DAB350BT is an attractive device. It costs about the same as the cheapest DAB head units, and if you already have a high-quality non-DAB stereo that you wish to keep for whatever reason, this is a relatively inexpensive and functional add-on.

Installation is fairly involved, making professional setup the preferred option. It’s also a shame that the power adapter is hardwired to the cable, making this system harder to use alongside an add-on satnav.

Once installed and setup, however, the Nextbase Adapt DAB350BT does its job well. If you do want to give your car a DAB upgrade, it’s well worth considering.