It’s no remake, rip-off or half-arsed homage, but a game that captures the style and spirit of bygone classics, taking Robotron and Smash TV as a starting point for a riot of noise, light and colour. Like Housemarque’s previous games, especially Super Stardust HD and Resogun, it feels like the evolution of a game style that reached its zenith in the 1980s, yet the looks and the way it’s structured feel bang up to date. Nex Machina is the game I would have dreamed of playing thirty years ago, yet I’m thrilled to be playing it right now.

Sure, it’s just a twin-stick shooter modelled loosely on Robotron – that game’s creator, the legendary Eugene Jarvis, is a creative consultant on this game. In each world your hero or heroine must survive a series of fifteen levels, destroying waves of relentless robot enemies while rescuing their bumbling human prey. You move with the left stick and blast with the right, dispensing a torrent of bullets to wipe out the hordes assailing you from every side. Kill them all and you’re off to the next level, until the fifteenth where the boss appears. Learn its patterns, avoid its attacks and keep on firing and take it out and there’s a new world awaiting, ready to repeat the cycle.

There is, of course, more to it than that. While foes can be killed and their incoming fire avoided, there are beams of glowing energy that kill on contact. These need to be phased through or evaded with a tap of the Dash button on L1. There are power-ups to be grabbed, giving you a shield, powering-up your bullets or extending your range and arc of fire. There are secondary weapons to be picked up, enabling you to swing a sword, fire a rocket or singe lines of enemies with your laser, all with a press of R1. 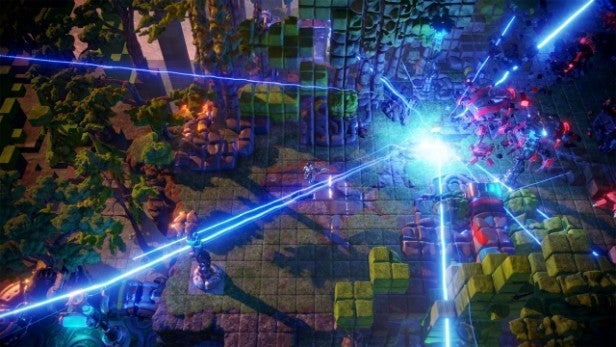 Most of all, you face a prodigious and bewildering variety of enemies, ranging from the arachnid grunts that rush you, to the mobile turrets that try to pin you down with focused beams. There are stomping mechs, spikey wheels, moving columns and a whole lot more. Each has its own movement patterns and specific attacks, and each works with its fellows and with the restrictions of the landscape to give you as hard a time as inhumanly possible, the levels steadily growing more difficult at just about the perfect rate.

Nex Machina demands a lot of your skills and reflexes, but like every great twin-stick shooter from Robotron to Geometry Wars and onwards, it also requires a level of strategy. If you can’t understand the situation and work out tactics to deal with it, the best reflexes in the world won’t help you survive. The challenge is thinking at all in environments where you’re at close quarters with literally dozens of spawning, rushing varmints, all eager to batter or blast you straight to hell.

At first, it’s enough to keep your cool, keep moving and learn from your mistakes. Later on it’s a case of getting and staying in the zone – in that weird state of arcade game nirvana where there’s just you, the screen and the controller in near-perfect harmony. There’s an amazing sense of flow, though the effects on your pulse might be alarming. 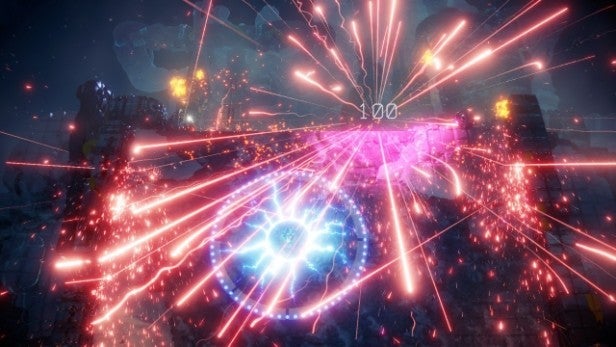 This is particularly true of the boss fights, with each boss a seemingly unstoppable mass of energy beams, bullet streams, destructive ripples and spawning antagonists capable of wiping out life after life in seconds. In practice, though, they’re perfectly stoppable; learn their moves and patterns, then attack them when they’re weak or just whenever you can. They’re tough enough to be interesting, with a great feeling of ‘YESSSS!’ when each one goes down, but never so tough that you want to give up on them and do something else.

And on an audio-visual level, Nex Machina is a stormer. The voxel-based enemies and backgrounds aren’t themselves that exciting, but the game throws on so many layers of light and particle effects that the experience is breathtaking – occasionally even overwhelming. The pounding techno score does much the same for the ears, backed up by a cacophony of vintage blasts, bangs and gurgles. It’s a phenomenal piece of work.

The downside might seem that it’s also a short-lived one. In its default Arcade mode Nex Machina is designed to be played through in one sitting, and within sixty to ninety minutes you could find yourself watching the end-credits. Don’t worry; you’re barely getting started. Housemarque has designed the game so that you play through on Rookie mode to learn the ropes then go back through increasingly tricky difficulty settings, taking on faster, tougher waves with fewer continues, uncovering new levels and new challenges as you go. 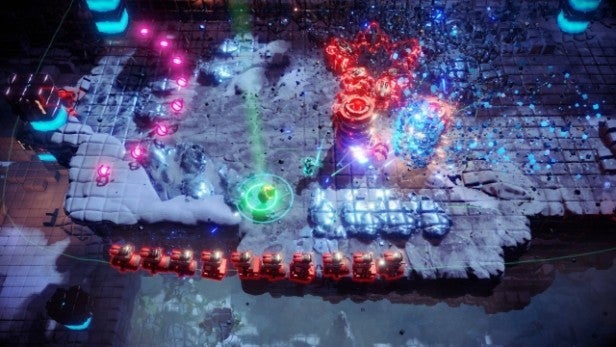 Completing Nex Machine just the once is like saying you finished Mario Kart because you won the 50cc championships. You haven’t seen the whole game – there’s actually a lot more to discover – and you certainly haven’t played it as it’s really meant to be played.

What’s more, beyond Arcade mode you’ll find an Arena mode, where you can play through the game’s worlds with different enemies and conditions, earning credits to unlock new challenges and making your way up the leaderboards. You can also play through each world individually, gunning for the next leaderboard position with three lives and no continues, or play through in a local co-op mode (sadly online co-op’s not supported). You can even spend the credits earned on customisations for your profile and your avatar, though I’m not sure this is quite as exciting as Housemarque seems to think it is.

I think what Housemarque is trying to do here, though, is build a community; a community where leaderboards matter, where some proof of mastery matters, and where videos of awesome play can spread like wildfire. Here we have a game that seems simple and accessible, where most players will be able to have fun and feel like they’ve achieve something, but which also has the depth and interest to keep a hardcore fanbase coming back for more. In fact, the biggest problem with Nex Machina is how hard it is to stop playing the damn thing. It has just one more go factor like you won’t believe.

Verdict
Intense doesn’t even cover it. Nex Machina is every bit as tough, exciting and absorbing as the eighties arcade classics that inspired it. There’s something about its gameplay that seems perfectly honed and balanced, pulling you into ever-more-challenging scenarios and pushing you to make the grade. Even its biggest weakness – its length – becomes a positive once you realise that this is a game that’s meant to be replayed and replayed.

The graphics, meanwhile, only restate Housemarque’s mastery of voxel, lighting and particle effects, transforming retro style into an overwhelming assault on the senses. Where so many rivals stop at replicating arcade classics, Housemarque has just built itself a new one.