Nintendo has once again brought one of its past console’s beloved exclusives to Switch with great effect, offering enhancements in the form of small visual tweaks and wonderful new mechanics.

The Nintendo Switch has long become a second home for exclusive darlings that sadly failed to make an impact on the Wii U, a system that never quite managed the stellar momentum of its younger sibling. The majority of these are fantastic gems, so it’s a pleasure to see them given another chance.

New Super Mario Bros. U Deluxe is the next in a long line of ports that improve upon the original release with new enhancements and features that, while hardly game-changing, provide ample reason for a second, or – for many – a first visit.

Deluxe is just that, refining the original package in minimal ways while introducing new power-ups that will make weaker players and newcomers feel more welcome than ever. Granted, it’s a relatively pedestrian 2D affair for the seasoned plumber, but enjoyable enough that it definitely deserves a spot on Nintendo’s hybrid console. 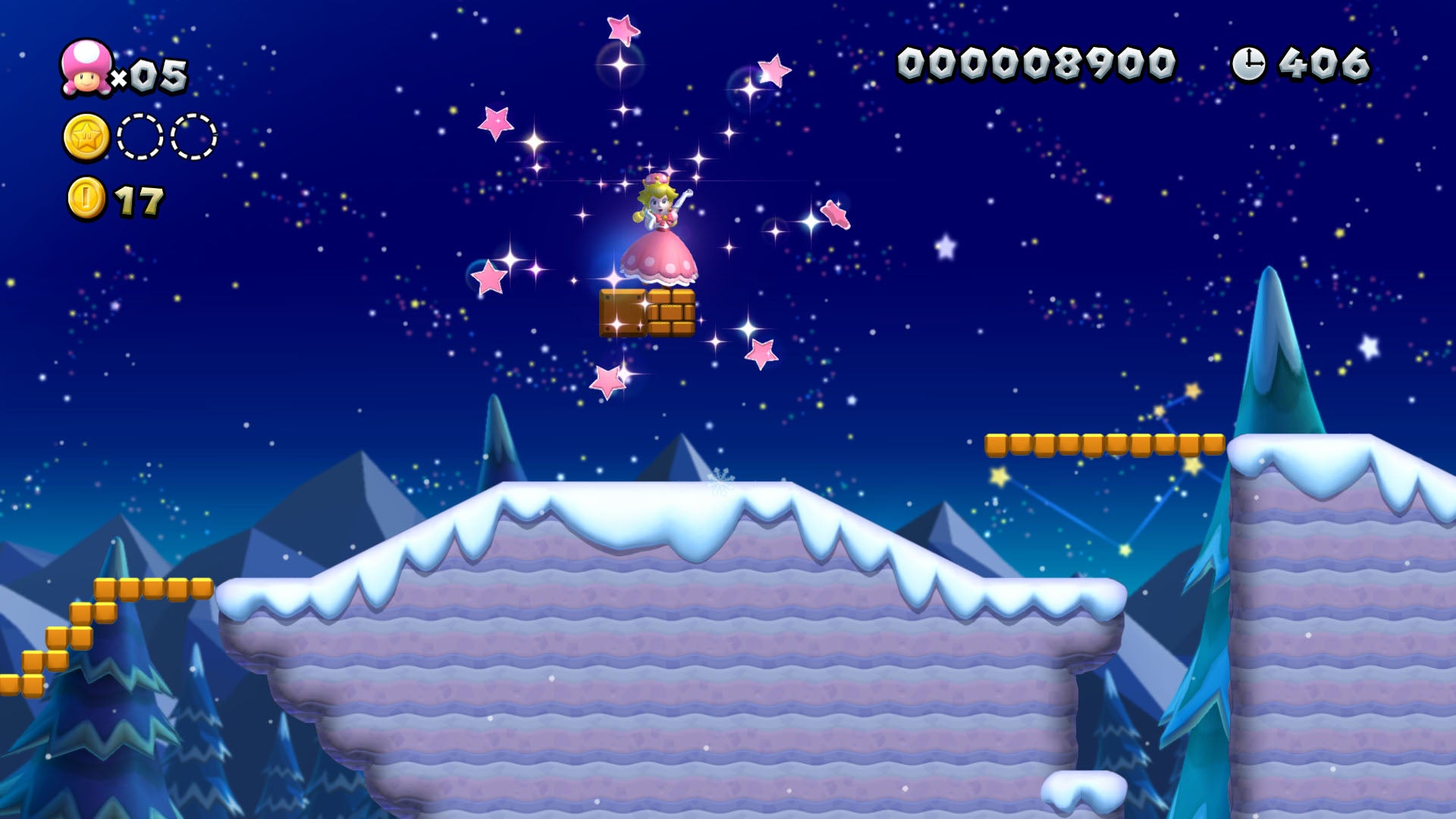 The Super Crown is Deluxe’s biggest new addition, and it’s a blast to play

If you’ve experienced any of Mario’s adventures in the past 20 years, you’ll know exactly what happens in the opening moments of New Super Mario Bros. U Deluxe. Mario and friends are tucking into a lovely dinner right before Bowser comes along and throws another tantrum, taking over the Mushroom Kingdom in the process.

And of course, the Princess has been taken custody as you’re hurled across to the other side of Mario’s homeland. If they aren’t head over heels for each other by now I’d be very surprised, especially since all of the Koopa Kids can be found across the game’s worlds ready and waiting to challenge you.

So, off you trot across an adventure spanning eight worlds, all of which are brought to life with lovingly creative designs. You could be venturing through a delicious desert made up of pudding or precariously hopping across a poisonous swamp. They all fit perfectly in the Mario aesthetic, and seasoned players will find plentiful secrets beyond them once penetrating the endgame.

It’s worth noting that if you played the original Wii U release or even its spin-off, New Super Luigi U, there’s very little here to encourage a second visit. One of the major new additions is Toadette, a new player character who also comes with her own bespoke power-up. 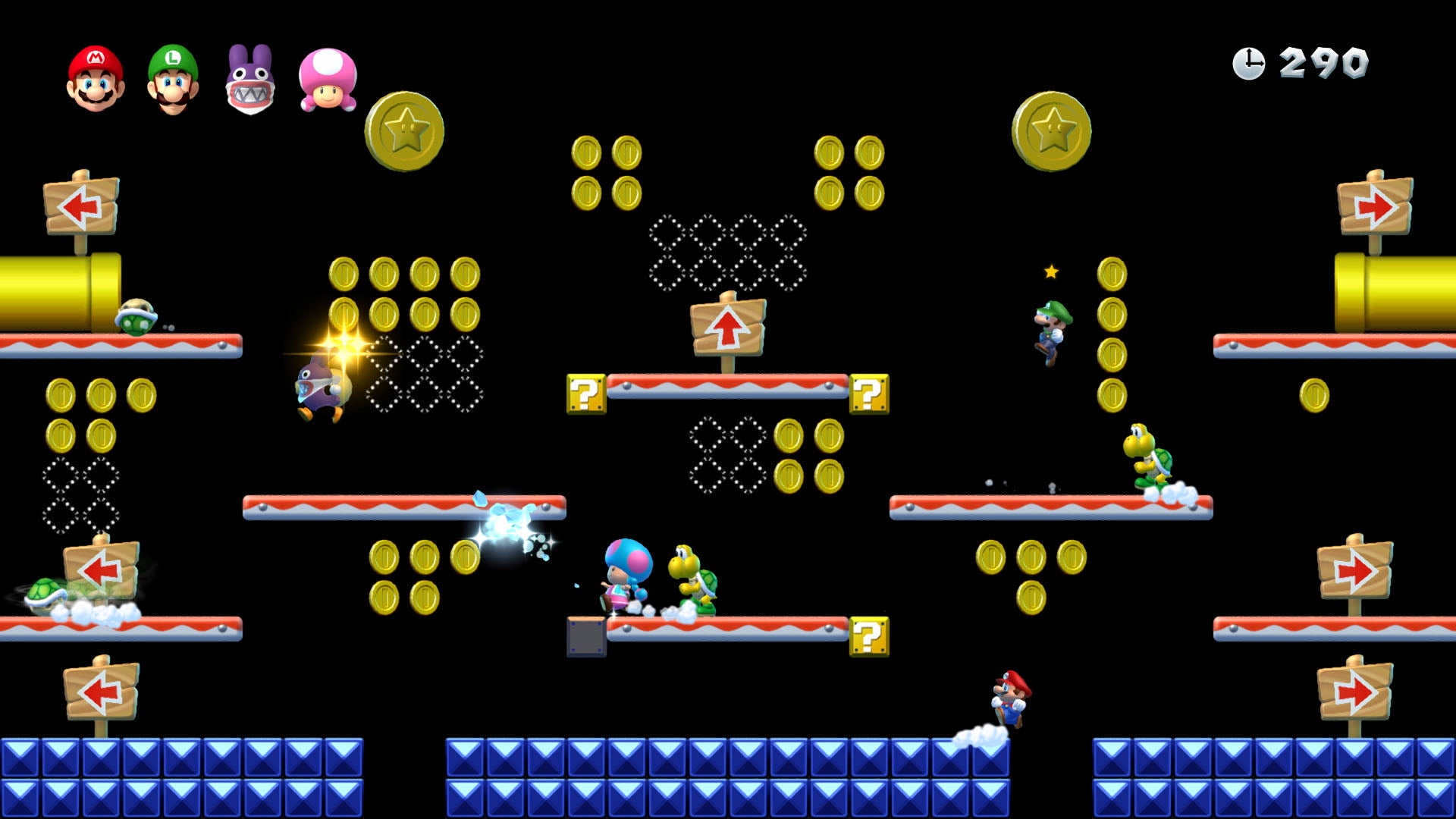 Teaming up with friends is made easier than ever on Nintendo Switch. Oh, and it’s still chaos incarnate

Having spawned the infamous Bowsette trend earlier last year, Toadette can collect a new ‘Super Crown’ power-up that transforms her into an adorable princess known as Peachette. Sporting a fabulous pink dress, this character possesses similar gameplay elements to Peach or Daisy. With a touch of the shoulder button she’ll twirl upward into the air, reaching platforms that would previously require a bit of finesse. She also doesn’t fall into pits as easily, which can be a godsend.

This isn’t a knock against Peachette in the slightest, but she is certainly designed for newcomers who want to experience Deluxe and everything it has to offer without bumping into any permanent obstacles. I’m unashamedly terrible at 2D Mario titles, so won’t deny that I enjoyed hoovering up collectibles like no tomorrow once the crown adorned my fungal noggin.

Even without the aforementioned Super Crown in your possession, Toadette remains a force to be reckoned with. Her swimming abilities are enhanced while you’re given additional time to complete levels. Blessed with the Very Easy difficulty, this is the perfect selection for players hoping to breeze through untouched.

Obviously, there’s still challenge to be had, and the likes of Mario, Luigi and boring old regular Toad can be selected with more robust difficulty settings. No matter which you select, Deluxe is an absolute blast from start to finish. However, it’s unremarkable and failed to break new ground in 2012, and the same applies here. 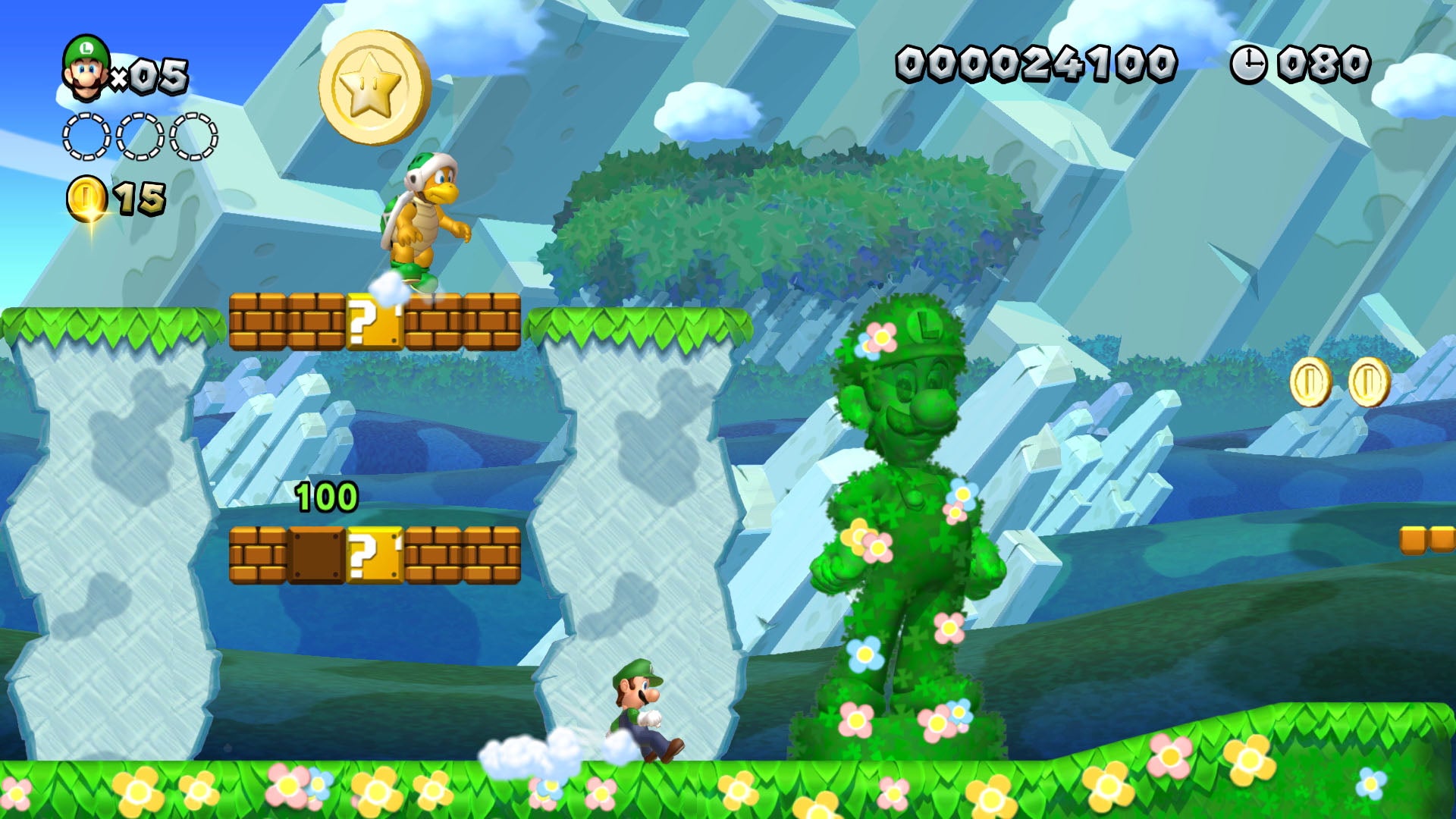 Fancy new items aside, New Super Mario Bros. U Deluxe simply doesn’t live up to  Super Mario Odyssey, a masterful platformer that occupies the same platform. Now, you could argue that 2D and 3D platformers are different beasts altogether, but the creative disparity is impossible to ignore. Deluxe is simply in a lower league.

That’s not to say it isn’t fun, since it most definitely is. Teaming up with friends to tackle stages together is a manic delight as you dash after coins and jump atop awaiting enemies. Levels are designed in such a way that you’re always on your toes for hidden secrets and collectibles. Nabbit is also present, a cheeky critter encouraging you to revisit old haunts for extra collectibles.

After conquering Bowser’s Castle, you’ll unlock a post-game requiring you to collect coins and items in absurdly hard stages across all eight worlds. It’s a fitting surprise for completionists, and many challenges are also available from the main menu for those seeking a satisfying victory from the offset.

Outside of the main campaign you have extra multiplayer modes such as Coin Battle, where you compete with friends to collect as many shiny things as possible. It’s chaotic and enjoyable in short bursts, yet lacks the substance of other modes.

New Super Mario Bros. Deluxe doesn’t offer a lot for those who enjoyed the original on Wii U, but that doesn’t really matter when you consider how many people actually had one of those things.

Nintendo has once again brought one of its past console’s beloved exclusives to Switch with great effect, offering enhancements in the form of small visual tweaks and neat new mechanics.

Peachette is a novel new addition, and having both the vanilla experience and New Super Luigi Bros in a single package is a treat, offering hours of content for even the most hardened platformer fans.