Available on Nintendo Wii U
With the weight of the Wii U launch upon its shoulders, there’s a danger that New Super Mario Bros U will go underappreciated. While it puts the Wii U Pad to good use it’s not the kind of game that will necessarily sell systems, nor is it a groundbreaking Mario in the style of Super Mario World, Super Mario 64 or Super Mario Galaxy. What it is is something less newsworthy, but perhaps more rewarding in the long-run: New Super Mario Bros U is the best 2D Mario since the golden days of the SNES. 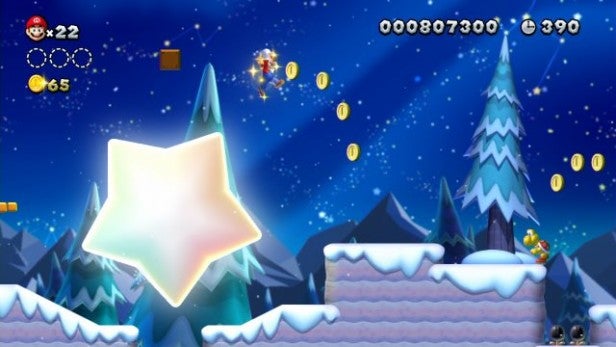 Making the Most of the Hardware?
If you’re looking for features that showcase the hardware, then you might be mildly disappointed. The HD graphics are beautiful, crisp and cartoony, but pretty much what you’d expect if you took the style of New Super Mario Bros Wii and New Super Mario Bros 2 into HD and improved the textures and the lighting. While it’s great to see Mario and his worlds in more detail, there’s nothing that’s going to make you gasp with awe.

The Wii U Pad, meanwhile, is employed in two ways. Firstly, you can play through the game’s various single-player modes on the Wii U Pad, with the display mirrored between the built-in screen and your TV. Switch off the TV or change channel and you can carry on playing, with the less-than HD screen of the Wii U Pad holding up surprisingly well under such concentrated scrutiny. For those of us living in homes with one hotly-contested big screen, this might be reason enough to love the Wii U. 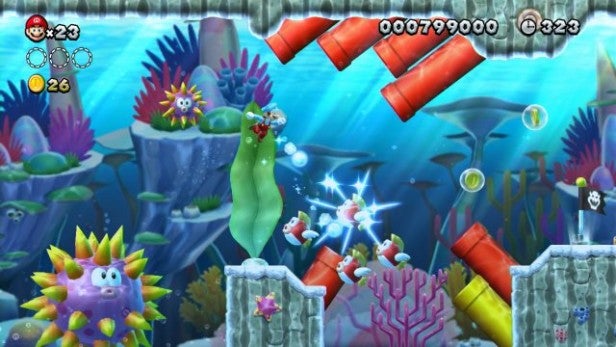 It comes into its own, however, in the game’s various Boost modes. Whether you’re playing through the story with one to four players on Wii remotes, or tackling the game’s Challenge and Boost Rush options, the player with the Wii U Pad gets a crucial support role, tapping the screen to summon handy floating platforms into being. Needless to say, these platforms can be used to help or hinder, giving the players playing Mario, Luigi and supporting Toads a last-minute save or a means to reach high stars, or trapping players you’ve decided to victimise so that they fall prey to hostile critters or rising lava. The choice is yours.

Boost mode is fun, both as a new way to join in the Mario mayhem, and as a means to unobtrusively help out if you’re playing with those with fewer Mario skills and less experience. It’s not enough, though, to justify yet another in the New Super Mario Bros. saga. What is, is the sheer quality of the gameplay.

Bringing the Magic Back to Mario
The last New Super Mario Bros, New Super Mario Bros 2 on the 3DS, was probably the laziest and least inventive 2D Mario ever; something which didn’t leave us feeling too excited about New Super Mario Bros U. These aren’t words you can bandy about with this one, however. The storyline might not be anything more than another variation on Bowser kidnapping the princess, and the world structure might be classic ‘a few levels, miniboss, a few more levels, boss’ but what actually happens in those worlds is anything but uninspired. 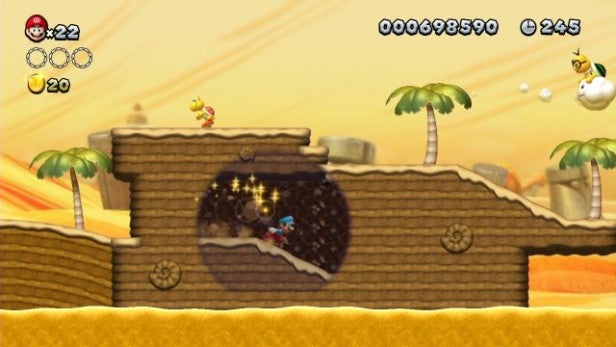 Partly, the magic comes back to the return of the large, branching map. Where previous New Super Mario Bros. games had nothing more than a series of worlds, New Super Mario Bros. U has a single, quite extensive map where you’re given a little scope to choose which world or which level you tackle best, and to try or ignore levels or even worlds until you feel the need to come back and tackle them. There are optional toad houses with bonuses to collect, hidden areas, sneaky routes and occasional ambushes, and even events that encourage you to return to an already conquered level and do it faster. New Super Mario Bros. 2 built replay into the game as a necessity, but New Super Mario Bros. U makes it feel like real exploration.

It also helps that these are levels stacked with secrets, with each playthrough showing up some pipe that takes you to a hidden coin chamber, or a shortcut, or an alternative, bonus-rich route. There are places which you’ll only reach while wearing a specific costume, and areas that you’ll only spot through keen perception or sheer, jammy luck.

Most of all, though, New Super Mario Bros U succeeds because it’s full of the kind of stuff that makes you smile. Listing new mechanisms, power-ups or monsters is the surest way to make it all sound dull, but from the lovable, gliding Squirrel Suit to some of the most enjoyable Yoshi variations yet, there’s always some new toy to try or some new way in which to use it. Meanwhile, the level designers are back at the top of their game.

Sure, you could moan that we’re seeing the umpteenth variation of the ghost house, the ice level or the lava-filled dungeon – and you wouldn’t be entirely wrong – but the traps and mechanisms keep getting bigger, more menacing and more ingeniously deadly. Classic platforms and creatures take on new forms that will test your wit – and sometimes your persistence. Where New Super Mario Bros. 2 often felt bereft of new ideas and like an exercise, New Super Mario Bros U regains that ideal balance between the fresh and the familiar. 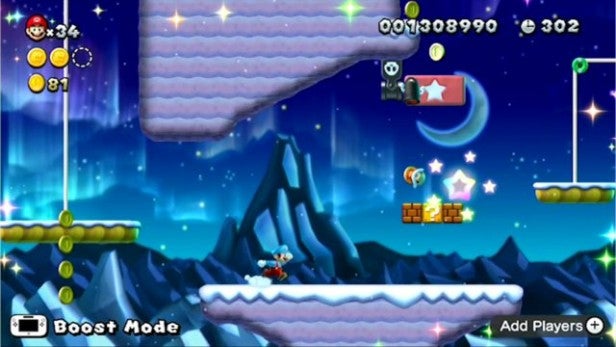 Difficulty Level
New Super Mario Bros U can be a challenging game. Experienced solo players may swan through by banking up extra lives and using them where needed – and the Super Play feature returns with Luigi ready to autopilot you through the toughest levels – but at times the new Mario can even be frustrating. You only have a limited number of lives, and once these are gone there are infinite continues. However, when you continue your progress is reset to the first level of the current world or the mid-world sub-boss (if you’ve reached them), which can leave you repeating the same levels over and over.

In the later stages this can be a real menace, causing you to return to earlier levels and bank up lives as a single player, or to work out strategies as a multiplayer team to make sure that you never end up with all lives spent at the same time (as long as one player has lives, the rest can continue). Let’s be clear: we’re not in Dark Souls territory, and though there are a lot of insta-kill substances in later areas, the game never feels unfairly difficult. All the same, you might want to be prepared for the odd temper tantrum or ear-splitting four-letter-word extravaganza. 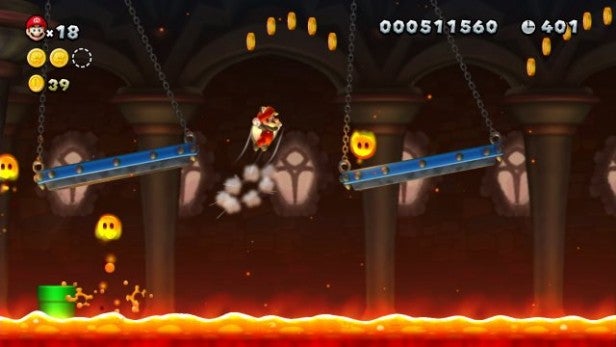 Challenge, Boost Rush and Coin Battle
Of course, Mario’s biggest fans will relish this kind of challenge – not to mention the dedicated Challenge mode. This hits you with a series of time-trials, timed tasks and opportunities to showcase your advanced Mario skills, playable either on your own or in Boost mode. Some are fearsomely difficult, but there’s always that feeling that if you could just master one little trick, you’d have this challenge in the bag. Depending on how well Nintendo has this integrated with the Wii U’s online features (still to be switched on in the UK at time of writing), this could be the start of great things.

With friends or family, Boost Rush and Coin Battle become the stars of the show. Up to four players race across a series of continually-scrolling stages, grabbing coins that increase the speed at which the stage scrolls. It’s fascinating to see how something that starts off quite genteel transforms into a bloodbath, particularly with a less-than-helpful soul on the Wii U Pad. Coin Battle, meanwhile, has players competing for cash through a series of classic Mario levels, and soon becomes a similarly brutal scrap. 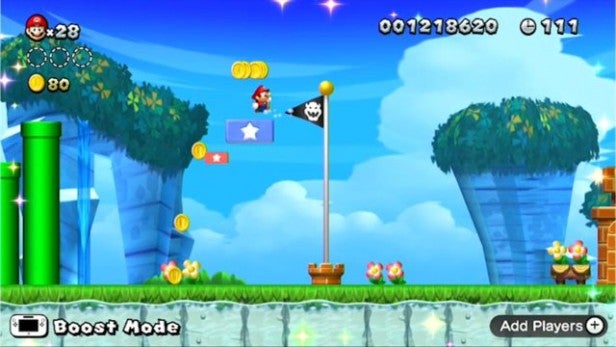 The upshot of this? A hugely satisfying Mario adventure that’s a rewarding solo experience and a fantastic co-op game, though it’s better with a couple of players than three or four. A Challenge mode that pushes the most skilled players and gives younger Newbies something to strive for.  A couple of multiplayer-focused modes that will keep the household coming back for more. Above all else, Nintendo has delivered a Wii U launch title that will make you glad you splashed out on the console. Look to other games for the showcase features or the gimmicks, but if you’re looking for a classic, this is it.

Verdict
New Super Mario Bros U isn’t the most innovative or groundbreaking Mario, or even necessarily the best game to showcase the Wii U, but Nintendo has delivered the richest and most satisfying 2D Mario since Super Mario World or Yoshi’s Island. The map, the levels and the secrets will keep solo and co-op players enthralled for weeks, while the Coin Battle and Boost Rush modes make it an equally strong competitive game. After the disappointments of New Super Mario Bros 2, this is the plumber back on winning form.