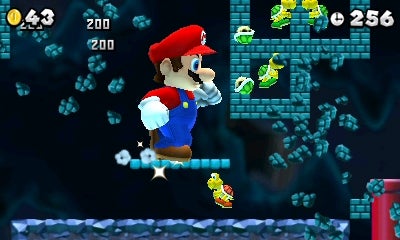 Still Old School
Like the original New Super Mario Bros on the DS, New Super Mario Bros 2 is all about the moustachioed plumber returning to his 2D platform roots. There are six worlds comprised of multiple courses, with a mini-boss in the middle and a boss at the end. Mario’s initial task is simply to get from one end of the level to the other, mop up the bosses and rescue the princess. Mario fans might be vaguely interested to know that, this time, the bosses are the Koopalings – the seven oldest of Bowser’s kiddies – but if you know Mario, you pretty much know what to expect.

The same goes for the gameplay. Mario runs and jumps with his usual finesse, and the controls work with that incredible level of response and accuracy that only Nintendo seems to know how to pin down. Playing New Super Mario Bros 2 isn’t as much like riding an old bike as it is like jumping on the bike and riding it with mind control. The usual basic blocks and platforms are supplemented by a range of trick platforms and mechanisms, most familiar from previous Mario games, and there are still pipes to disappear down into, doors to enter and a variety of traps to avoid. 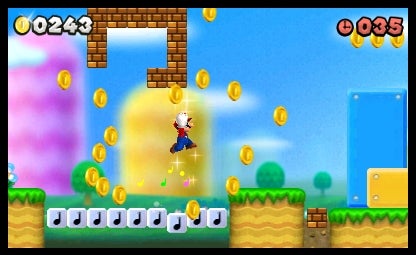 Meanwhile, all your old favourite varmints return, from the standard mushroom Goombas and turtle Kooper Troopers, to those sneaky ghosty Boos, squishing Thromps and Whomps, Lakitu and Bullet Bill. Classic costumes, like the gliding, tail-swiping Racoon Suit and the Fireflower suit come and go. New Super Mario Bros 2 knows what works best about classic Mario, and doesn’t waste time in dishing it out.

Nintendo’s presentation is as flawless as ever. This is comfortably the best-looking 2D Mario yet, with beautifully rendered characters and courses, and the same kind of clever scaling and wobbling effects we saw in New Super Mario Bros and in the Yoshi’s Island games before that. 3D isn’t in any way an essential feature, but it adds impact to a few key scenes. All those favourite Mario tunes also make an appearance, and the way enemies interact with the soundtrack sometimes makes New Super Mario Bros 2 feel like Mario: The Musical. 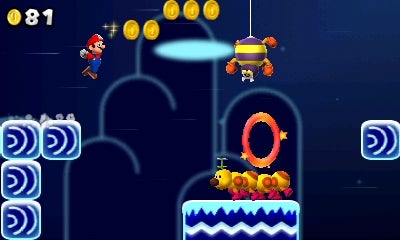 New Mario, New Gameplay?
The problem is – initially – that unless this is your first or second Mario, you’ll have seen it all before. Courses and worlds drift by in an enjoyable fashion, but the feeling that this is Mario by numbers grows with each passing one.

The quality of the best Mario games – the ability to take all the old ingredients, throw in something new and create something that feels classic yet still innovative – just isn’t here. Here’s the ice world. Here’s the ghost house. Here’s the desert. Here’s the tropical, undersea world. Mario’s tropes are too smart and lovable to be called clichés, but they’ve never been so close to the line as here. Nor do repeated mini-bosses and some of the laziest bosses in Mario history make things better.

What is new is the focus on coins. Always a fixture of the Mario universe, coins have become Super Mario Bros 2’s guiding feature. Showers of gold erupt at the stomp or headbutt of a button or magically appear when you repeat certain jumps. Pressing certain switches or activating certain Pow blocks will cause huge swathes of scenery to turn into coins.

There’s even a special hat that dispenses golden coins as Mario jumps, and a variation on the flower suit makes everything Mario touches turn to gold. Taking things a step futher, a special gold ring transforms enemies into walking goldmines when leapt through. Land on a turtle, kick it’s shell downhill, and just watch all the coins spill out. If games could cure a double dip recession, then Super Mario Bros 2 would be the game to do it. 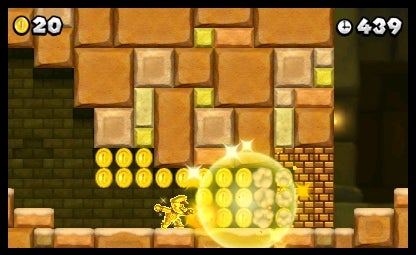 Coin Collecting
This is fun – the game tracks your continuing coin tally from level to level, and you still get extra lives for every 100. There are notifications when you reach key milestones, and the game even features a special score attack mode where you can revisit a random selection of conquered courses and push for a coin-collecting high score.

All the same, it doesn’t quite make up for the ‘seen it all before’ vibe, nor the short length of the main game, which can be conquered within five to six hours of play. There are some difficulty spikes, but Nintendo has generously thrown in the invincible white racoon suit from Super Mario 3D Land (though technically a white Tanooki suit in that game), which appears if you die more than five times in the same level. This, and the number of lives you’ll build up through coin collecting, make New Super Mario Bros 2 the easiest and quickest Mario game ever to get through. 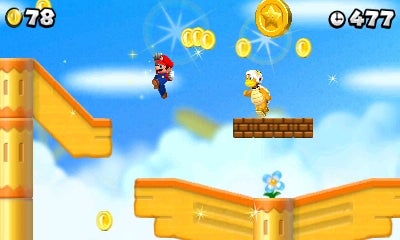 Searching for Secrets
So far, so bad, and we’d be preparing to hit Mario with his worst ever Trusted Reviews score. However, it turns out that there’s more to New Super Mario Bros 2 than just putting Bowser in his place. Here, as in all the best Mario games, it’s all about collectibles and secrets. Special star coins, three on each level, are needed to open up Toad’s various power-up emporiums or open alternative routes. Spotting these is one thing – getting hold of them takes serious skill.

Meanwhile, secret courses and even secret worlds extend the adventure, providing you have the detective skills (or the Google-searching skills) to unlock them. Though you can burn through New Super Mario Bros 2 in a few short hours, it will take you much, much longer to exhaust the game, particularly if you find another player with another 3DS and get stuck into the enjoyable co-op action. It’s just a shame that some of the best and most exciting moments are effectively hidden away out of sight. 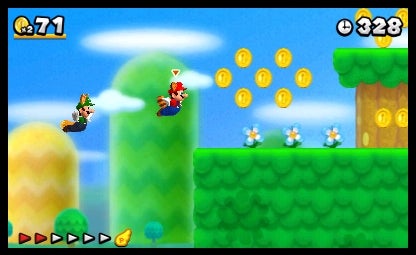 This really saves New Super Mario Bros 2, but it’s not enough to lift it into the pantheon of Mario greats. Compare it to the ingenuity and imagination of Super Mario 3D Land or the Super Mario Galaxy games – even the hectic co-op play of New Super Mario Bros Wii – and it still feels an inferior effort. Let’s be clear: this is still an immensely entertaining, exuberant platformer full of smart ideas and polished to perfection. It’s just that it hasn’t got that touch of genius that normally puts the Mario games on another plane.

Verdict
New Super Mario Bros 2 suffers from a short main game and a sense that something has gone stale in the Mushroom Kingdom. Yet it makes up for it with an extensive endgame, where it’s less about getting from A to B and more about discovering everything along the way. Throw in all the coin-spewing, moolah-flinging madness and you have a solid outing for the chubby Italian, albeit not one of his greatest ever hits.