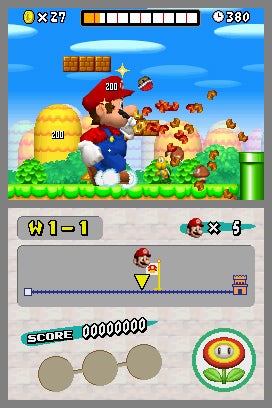 The rest of you may need a few more details. Well, essentially this is a similar effort to last year’s Sonic Rush: a classic, going back to the roots 2D platformer with enhanced visuals that take advantage of the DS’s 3D horsepower. Of course, there is one major difference. Sonic Rush always felt a bit like an apology, as if Sonic were saying sorry for Sonic Adventures 1 and 2 and Sonic Heroes, and that he too was glad to be back in 2D, where he belonged. New SMB feels less like the prodigal son returning, for the simple reason that Mario has nothing to apologise for. Mario 64 now seems certain of a place in the Greatest Games of All Time room in the Big Games Hall of Fame, and Super Mario Sunshine, while inferior, was still smashing stuff. 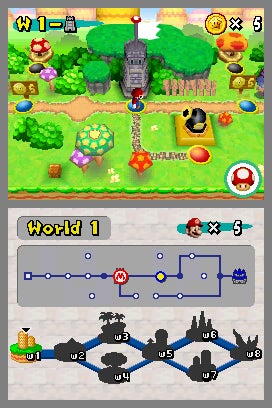 All the same, there is something great about seeing Mario get back to fundamentals. And trust me, they are really fundamental. Just as in the original Super Mario Bros, you start each level with the chubby plumber at one end, the finish flagpole at the other, and a whole lot of platforms, coins and enemies in-between. The controls basically – and quite rightly – ignore the DS touchscreen. You run and you jump, bouncing on the enemies destroys them, and vacated Koopa turtle shells can be kicked at other baddies. Bricks and gold blocks – which may or may not contain coins or special items – can be cheerfully nutted from below, while pressing down when jumping above them unleashes the good old Ground Pound – a heavyweight bottom-first stomp that destroys any blocks sitting below.

In many respects, it’s like going back to the very beginning of the platform game, and yet New SMB never feels that old. Maybe it’s because, from the start, Nintendo got control and movement right in a way few rival platform franchises ever managed. There’s a responsiveness to the controls – a way of finessing Mario’s leaps, falls and slides – that’s actually a pleasure in itself. And it means that, no matter how hard the going gets, you always feel that you live or die by your own skill, not by some flaw in the basic game mechanics. The game even incorporates moves familiar from more recent platformers – triple jumping, wall jumping, sidling and ledge dangling – in ways that makes them feel perfectly natural, like they’ve always been there. And best of all, the usual cast of critters is back to give Mario a hiding: Hammer Bros, Bullet Bill, Lakitu, Piranha Plants, Boos, Bob-ombs, Chain Chomps, Goombas, Paratroopas and Thromps are all present and accounted for. 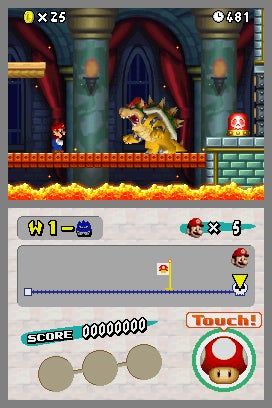 Just as importantly, New SMB never looks that old. Yep, it’s 2D. Sure, it seems to be using a combination of 2D and 3D sprites and backgrounds. But its bright, beautifully shaded visuals seem a perfect marriage of the style of Mario World with the characters and effects of Mario Sunshine. What’s more, New SMB has followed the lead of Yoshi’s Island in bringing 3D elements into play. We’re not just talking background eye-candy, but elements that actually help make the game what it is. 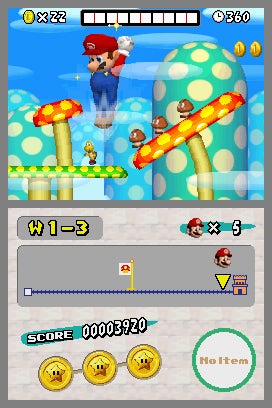 These start with Mario himself. As always, hitting certain blocks will release a collectible upgrade; the mushroom makes Mario larger and stronger; the fire flower gives him a natty white suit and the ability to throw bouncing fireballs. However, New SMB adds too new ones. The first, a tiny blue mushroom, transforms him into Mini Mario – a pint-sized plumber who can squeeze through small gaps, leap further and higher, and even run on water. The second turns him into Mega Mario: a screen-sized monster that bulldozes everything that stands in his way. The sight of Mega Mario on the rampage is always a spectacle, and one that’s especially satisfying when you see a particularly irritating baddie trampled into dust.

However, New SMB arguably goes beyond even Yoshi’s Island in the way it harnesses its technology throughout the game, not just in set-piece battles or chase sequences. There are whole levels where the tides ebb and flow, the water level rising and dropping to make new platforms accessible or bring sunken baddies to the surface. There are levels full of giant mushrooms that grow, tilt and shrink while you try to make your way across; levels with sea monsters to ride or terrifying monster eels to run from. Throughout, there’s a feeling that whatever has come before, just wait – you ain’t seen nothing yet. 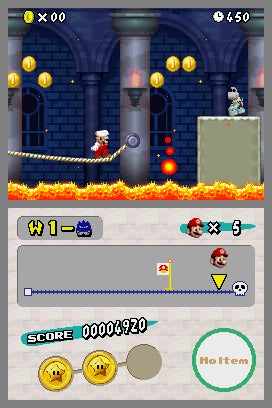 You see, it’s all about invention. The average platformer tends to dish out its main elements in the first few levels, and then simply re-present them harder and faster than before. With the Mario series, Nintendo has always taken a different path: adding new dangers or new mechanisms with every level, then – just when you think you’ve got them licked – finding ways to combine them that make you exercise your brain, not just your reflexes. What’s more, the difficulty level is nigh on perfect; victory is always just within your grasp, it might just take a few more goes to grab it.


Of course, Mario wouldn’t be Mario without secrets. The levels themselves are full of them: hidden blocks that trigger stars or power ups; concealed areas and pathways; warp-pipe shortcuts and hidden cloud sections. But New SMB goes further. While Sonic has always had alternative routes through each level, it’s always been a linear experience, one stage leading to the next in predictable progression. Mario gives you a little more choice. Like Super Mario World, New SMB arranges its levels into worlds, each a map with the different stages and paths picked out. There’s always one main road to take, but collecting special star coins in each stage allows you to unlock additional routes and stages which may or may not be easier or more rewarding. And let’s face it; you’ll probably want to play them all anyway. 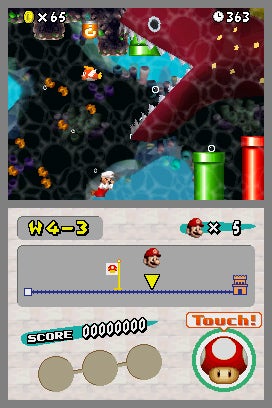 And while you’re at it, you’ll soon realise that there are two whole extra worlds to uncover – you just need to find the way in. All of this means that there’s more game here than you might initially think. I’m not usually one for the endless replaying of levels in order to extract every last secret, but with this game I’d make an exception. Looking for clues and hints becomes a fascinating exercise in detection – what does that switch do? How the hell do I get in there? – and you find yourself not just working your way around the levels, but trying to think your way into the designer’s mind. In fact, if you don’t revisit levels and unlock all the cool stuff, you’re kind of missing the point. 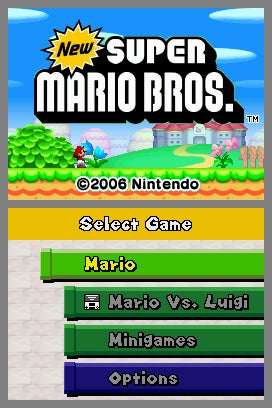 After all this single player genius, any multiplayer options were bound to feel a little tacked on, yet New SMB comes suprisingly well stocked with two or four-player goodness. Firstly, while it might just whet your taste for proper cooperative mode – sadly still not implemented – the two-player Mario vs. Luigi mode allows two players to compete across five stages for star coins. It’s a fun, if limited diversion. The party games fare better by virtue of quantity as much as anything else. Divided into action, puzzle, table and 1 on 1 sub-categories, they present the sort of quick fire games familiar from Mario Party (and a few may be very familiar, having been taken directly from Super Mario DS). For the most part, they’re simple to pick up and play, but hugely enjoyable in the right company, with efforts running the gamut from a silly snowball fight to a Mario-style spin on some old casino favourites. 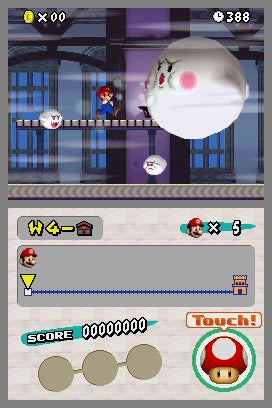 In the end, I guess that there will be much debate about this one amongst the Nintendo faithful: is it really as good as Yoshi’s Island? Does it really get anywhere near the depth of Super Mario World? Is it as inventive as Super Mario 3 was back in the day? Maybe, but then, maybe not. But stop. Just pause for a second and remember what we’re talking about here: a game that stands comparison to some of the very best games of all time. The very fact that we can actually have this debate gives you some indication of just how excellent it is. So meet the New Bros. – it’s the same as the old Bros., but we wouldn’t have it any other way.


A storming new 2D Mario that holds up to the legacy of its legendary predecessors, and another good reason why the DS is the games machine of the year.