What is the New Nintendo 2DS XL?

In a move that might have come as a surprise following the strong launch of the Nintendo Switch, arguably its most powerful handheld console, Nintendo is back with yet another new handheld in the Nintendo 3DS family of handhelds.

To make some semblance of sense of the New Nintendo 2DS XL proposition, you need to first decipher its possibly confusing name. The ‘New’ refers to Nintendo’s flagship range of 3DS handhelds featuring bolstered processing power, an extra analogue ‘C-stick’ and two extra shoulder buttons. Importantly, these will play games that are designed to exclusively work with the ‘New’ range by taking advantage of those extra features, although exclusive titles are few and far between.

With the launch of a new entry in the range, it’s clear that Nintendo hasn’t given up on ecosystem. There’s a decent number of new titles on the horizon, most recently shown off at E3 2017, and a strong back catalogue of certified classics. The New Nintendo 2DS XL is arguably now the Nintendo 3DS game-playing portable you should buy. 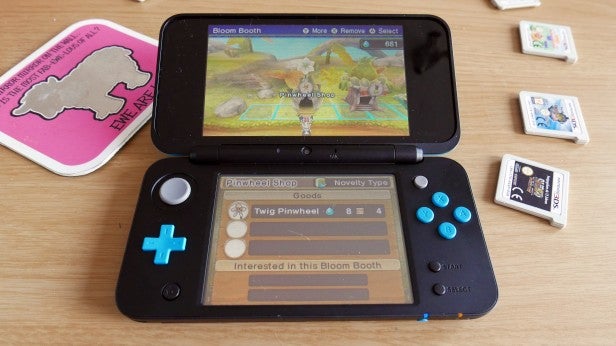 Gone is the non-folding, somewhat unwieldy design of the original Nintendo 2DS. Considering the 2DS line was in part envisaged as a more kid-friendly option that removed the 3D feature, I always found the lack of protection afforded to the dual displays of the original model a little surprising. That and its size due to not collapsing down.

The New Nintendo 2DS XL goes back to the classic clamshell design that’s been a mainstay since the Gameboy Advance SP, which makes for not only a more portable design, but one that keeps the screens safe from scratches when you throw the portable console into a bag or your pocket.

You’ve got two choices of finish. Right now there’s black with turquoise accents or white with orange accents that are in line with the 2DS range’s more youthful marketing. Undoubtedly more will come in the future, especially with special edition game tie-ins.

The top of New Nintendo 2DS XL has ridged plastic that gives a bit of texture and helps make the console feel less like a toy. The feel of the console is important because there was the potential for it to feel a little cheap as it’s shed some weight compared to the 3DS XL. As it stands, though, the New Nintendo 2DS XL feels nicely balanced in your hand as the weight is predominantly distributed through the lower portion, making marathon gaming sessions less tiring. 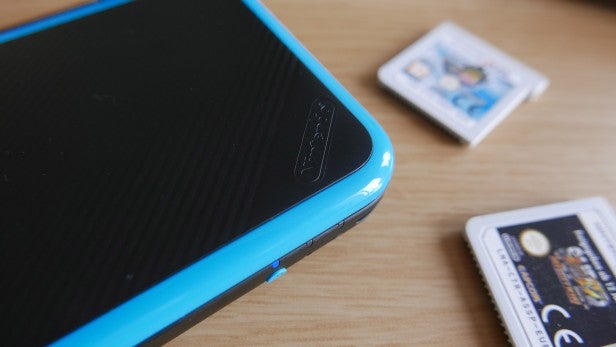 If you’re coming from any other Nintendo 3DS family model, you’ll find the general layout has changed somewhat. The stylus and headphone jack are now placed on the bottom. Next to these is a flap that conceals both the microSD slot and the game cartridge slot.

I’m still not sure how I feel about the cartridge slot being tucked away. There’s less chance of you accidentally ejecting a cartridge now, sure, especially with the console in a bag, but I found the flap quite difficult to open at times. It made swapping games more fiddly than I would have liked. A 4GB microSD card is included with the console but you can easily swap this out if you need more space. 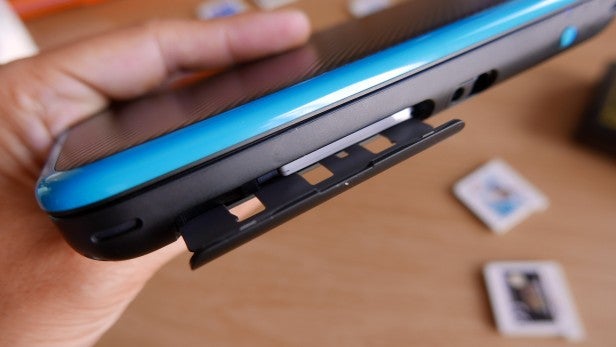 The other annoyance is the stylus. It would be all too easy to make one of the telescopic variety, meaning you could extend the length during use and then it would collapse down for stowing away. Not only is this stylus a fixed length, it’s also really, really short.

It means your hands quickly begin to feel cramped and it makes even slow-paced stylus-based games like Picross begin to feel uncomfortable after not too long. Hopefully third-party styluses will become available because I really don’t get on with the one that’s included. 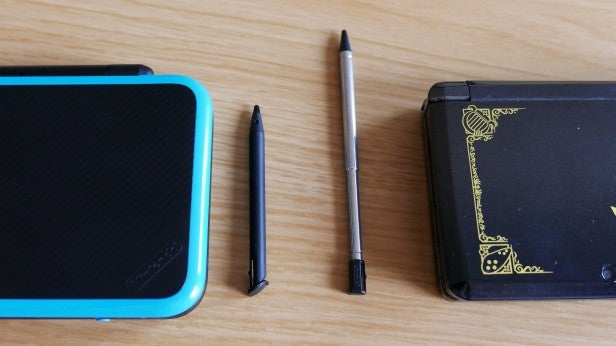 Otherwise, actually playing games is as comfortable as you would want. The circle pad, D-Pad and buttons are all the usual Nintendo quality you would expect. I wasn’t immediately sold on the c-stick, which isn’t anything like the opposite circle pad. Instead, it’s more like the sort of trackpoint nib you’d find on a business laptop, in the sense it doesn’t really move when you attempt to tilt it.

Still, in games like Ever Oasis that use it for camera adjustments, it worked well enough once my brain adjusted, and you’re never really using that often like you would with dual analogue sticks on a standard controller. 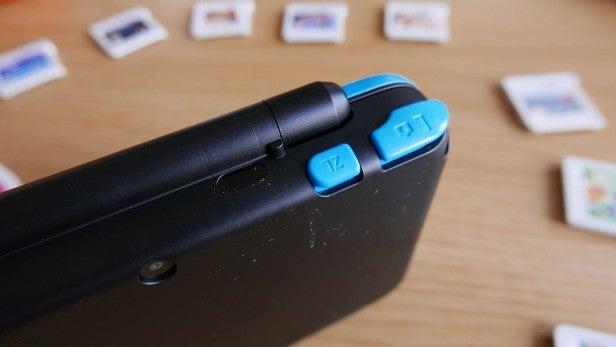 The extra ZL and ZR shoulder buttons are placed between the standard L and R buttons, so younger users might find them a little difficult to reach but I otherwise found them totally fine.

The hinge that connects the two screens is reasonably stiff, meaning it holds the display at two distinct angles without any wobble. It’s again a bit of an anomaly, as the design has changed from Nintendo’s previous clamshell designs. It no longer extends the full width of the console so now when the console is closed, there’s a distinct ridge that extends out the back and detracts from the overall sleekness.

Oddly, the hinge design also means that a small fraction of the camera lens is exposed, which means it’s potentially susceptible to some damage if you’re not careful.

The inclusion of cameras in themselves are also a little perplexing. There’s the oft-neglected and forgotten about front-facing camera and a pair of 3D-capturing lenses on the back. 3D image capturing lenses on a portable that only displays 2D images. I’m sure you can see what I’m getting at. 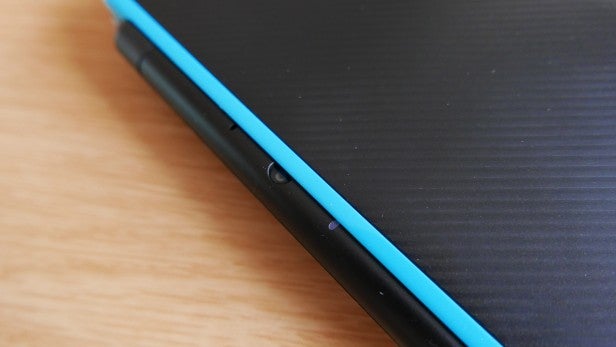 Granted, there are a few games in the Nintendo 3DS back catalogue that use the cameras, so in part Nintendo’s hand was slightly forced and yes, you can use the rear cameras for the AR games and a bunch of cards are included in the box, but they’re a novelty people forget about.

It’s a shame some cost couldn’t have been shaved off by doing away with the cameras, which themselves aren’t particularly good quality for taking photos. When everyone – kids included – typically have access to even a budget smartphone, better photos can be had elsewhere so it all feels a bit pointless.

Amiibo support makes a return, so you can pop one of your figurines on the lower touchscreen to unlock extra content in compatible games.

As mentioned the displays have been super-sized and are 82% bigger than the standard 2DS screens, now measuring 4.88 inches for the top screen and 4.18 inches for the lower touchscreen. The resolution hasn’t seen an increase, though, and is still just 400 x 240 per screen, which leaves you with a less sharp overall image once enlarged. It’s all the more noticeable in this day and age of the Nintendo Switch and high-resolution phone screens.

The individual pixels aren’t really noticeable but in the grand scheme of things, with the Nintendo 3DS’ library of games having far simpler graphics, it’s not as detracting as you might expect. Having all of that extra screen real estate does make for a more enjoyable gaming experience, especially having a large area to use the stylus.

Of course, there’s no 3D effect. But so few games really take advantage of it, especially not for gameplay reasons, so it’s not a great miss in my books even if the New Nintendo 3DS XL did do interesting head-tracking to better maintain the 3D illusion. 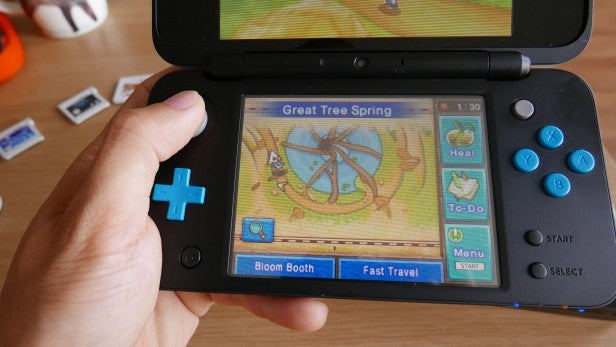 One thing I did notice when placing the New Nintendo 2DS XL next to my original Nintendo 3DS is that the screen has a much warmer, yellower tinge. A yellow tint was also seen on many New Nintendo 3DS XL models, too, and seems to the norm now. It’s not something that I really found a detriment and only noticed when I was transferring system data between the two consoles and both sets of screens were displaying the largely white menu screens. During gameplay, it’s difficult to notice.

There’s the usual 5-level screen brightness adjustment but unfortunately, even at the top level it’s still not bright enough to comfortably use outdoors under bright conditions.

I was hoping that with the larger screen and form factor, there’d be space for meatier speakers rather than the slightly thin-sounding speakers of previous Nintendo 3DS handhelds. Unfortunately, that’s not really the case and the speakers still lack any real presence or weight. At maximum volume they’re not particularly loud unless you’re in a very quiet room, so to really appreciate some of the 3DS system library’s stellar soundtracks you’re better off reaching for a pair of headphones. 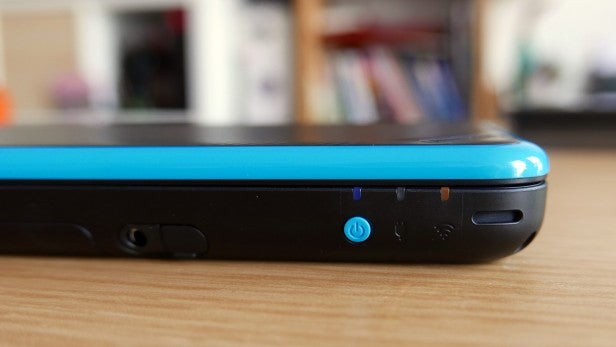 In a hugely positive move, a charger is now included in the box. This seems a silly thing to proclaim merrily, but bafflingly the New Nintendo 3DS didn’t come with a charger and you had to instead buy one separately. Now you’ll have one less thing to worry about.

It’s worth noting it’s the same charger that’s used dating back to the original Nintendo 3DS, so if you have any previous portable charger lying around you can use that, too. Or, better yet, pick up an inexpensive USB to 3DS charger cable if you want to cut down on the number of chargers you need, or if you want to charge from a portable battery pack.

Battery life is around 3.5-7 hours depending on your usage, which is no doubt aided by the lack of any 3D. With the screen brightness dialled all the way up, I saw just short of an hour and a half before the battery meter went down 25%. With more conservative brightness and headphones use, it’s possible to get much more stamina.

Should I buy the New Nintendo 2DS XL? 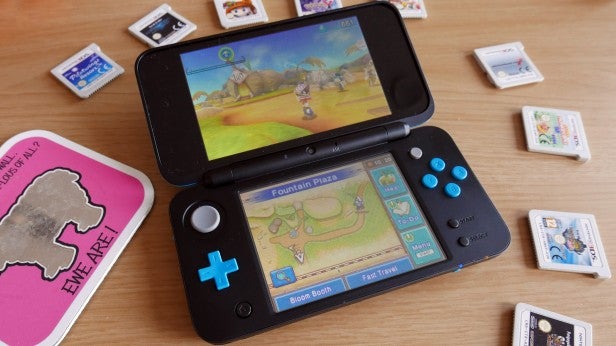 Don’t care much for the slightly gimmicky 3D effect of the Nintendo 3DS? Then buy the New Nintendo 2DS XL. Even for its at-times puzzling design choices, it’s still a massive step up from the unwieldy Nintendo 2DS and contains all of the other upgrades that have come to the various 3DS systems over the years. The bigger screens by themselves make for a much more enjoyable experience, coupled with a more sensible form factor and typical Nintendo build quality.

It’s the Nintendo 3DS family model I would recommend to most people who haven’t already picked up one of the portable consoles. With a number of high profile games to still be released, and six years’ worth of back catalogue on top of backwards compatibility with the original Nintendo DS, the New Nintendo 2DS XL still has the capabilities to keep you well entertained and for considerably less money than the New Nintendo 3DS XL.

The New Nintendo 2DS XL is the best-value Nintendo 3DS system family console to buy for everyone but the most ardent 3D fans.