What is the New Balance RunIQ?

New Balance is a brand most will know for its sports apparel but, like Under Armour and Nike before, it’s now branching out into the sporting technology space. The New Balance RunIQ is its first running wearable, created in partnership with running and cycling platform Strava with an Intel chip inside.

As such, Strava is integrated heavily into the RunIQ, tapping into the RunIQ’s range of sensors in order to track your run and biometrics and automatically uploading your runs to the community platform.

But while the New Balance RunIQ on paper includes everything you might want from a running-oriented smartwatch, its execution is rather lacking, from middling battery life to a slightly disappointing display. In the end it comes up short when up against other laser-focussed running rivals like the similar Android Wear-powered Polar M600 or even the smart feature-lacking TomTom Spark 3. 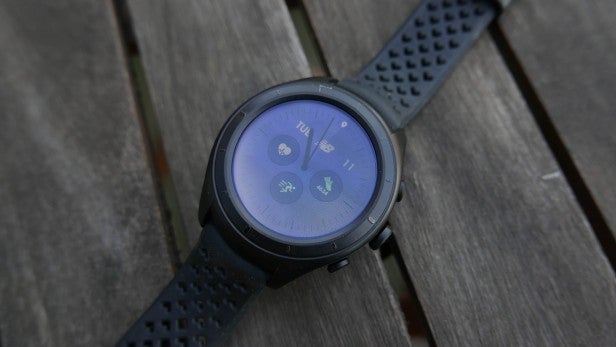 The New Balance RunIQ is, first and foremost, a sports-oriented smartwatch, so it has a design to match. It has a round design, which for me gives it the immediate edge against the likes of the Polar M600 in the design stakes.

That said, it’s still a rather chunky beast of a watch that’s not going to win many awards for style – in fairness that sentiment can apply to most running watches. At around 14mm in thickness, it’s actually not that much thicker than a smartwatch like the Huawei Watch 2, but it is noticeably heavier, which is more of an issue when slapping something on your wrist during a run.

As for the display, there’s a circular 1.39-inch OLED display with 400 x 400 resolution. There’s also no ‘flat tyre’ in sight. While it supports always-on display, which shows a power-sipping monochrome watch face when not in use, it was disappointing to not have an ambient light sensor to automatically adjust brightness. 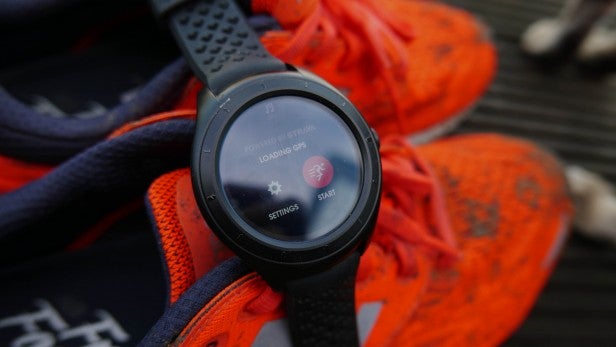 When outdoors, you’re going to have to crank the display up to its maximum to see anything, especially when quickly glancing during a run. While indoors, I preferred to have to the watch set to a level 3 (out of 5) brightness, which simply doesn’t cut it on a bright day. There is also the Brightness Boost option available from Android Wear’s quick shortcuts, but that’s also not the most convenient.

The RunIQ has an all black colour scheme used for the casing, which is made from metal yet feels surprisingly like plastic. It feels sturdy enough, though, and leaves you less concerned about it dealing with the sweat and rigours of a long run. Flip the watch over and there’s an optical heart rate monitor and contacts for the magnetic charger. As the watch is water resistant to 5ATM (50 metres), you’re safe to wear it in the shower or go for a swim.

Along the edge is a non-rotating crown flanked by two additional buttons. The central crown button acts as a shortcut to your Android Wear apps list when held, while the top button provides quick access to tracking a run or cycle. The bottom button is a shortcut to Google Play Music. 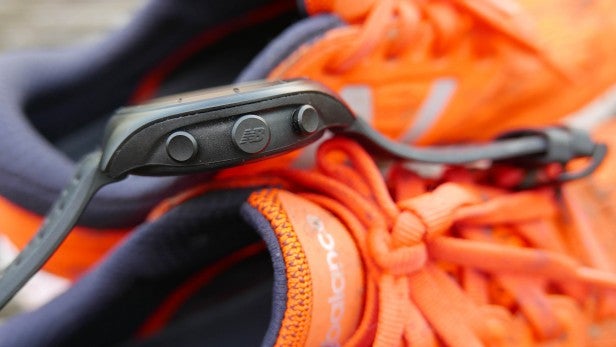 I couldn’t find any way to customise the shortcuts, as I would have liked to have changed the bottom button as I’m not much of a Google Play Music user. If you transfer some music directly to the watch’s storage this will be useful at least. Oddly, I found the bottom button very difficult to press, as it was noticeably stiffer, meaning I had to call upon an opposing thumb in order to press it reliably.

The perforated, and similarly black and drab, silicone band has little arrow shaped cutouts that give some visual interest and also helps with the breathability of the strap. Some might argue they’re little heart shaped cutouts but that’s not immediately obvious as they’re upside when the watch is on your wrist. 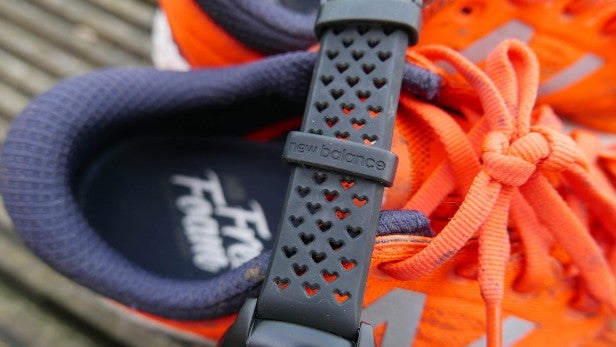 As these perforations are used for the watch buckle, it also meant a more adjustable fit due to a greater variety of sizing options. Another positive of the band is that it doesn’t pick up lint and fluff as has been the case with other silicone straps I’ve worn, which can leave your wearable looking rather dishevelled after a while.