Netgear may claim that the SPH101 is the world’s first Skype enabled mobile phone but in reality you’re going to see very little difference in features between this product and those offered by most other vendors. We’ve already taken a look at SMC’s WPSK100 and apart from their build quality and design they deliver pretty much the same set of features. The reason for this is they use the same embedded Skype software and with both phones to hand we could see that the user interfaces were almost identical.


Price-wise, there’s virtually nothing to separate these two products but we found there are more than a few subtle differences elsewhere. For starters, Netgear’s build quality is far superior as the SPH101 is slightly smaller than the WPSK100 and better constructed. In the touchy feely stakes it’s nicer to hold as well and although only around 8g heavier, it actually feels much more solid. One of our testers endowed with petite digits also said that being slightly smaller the Netgear phone fitted their hand better. 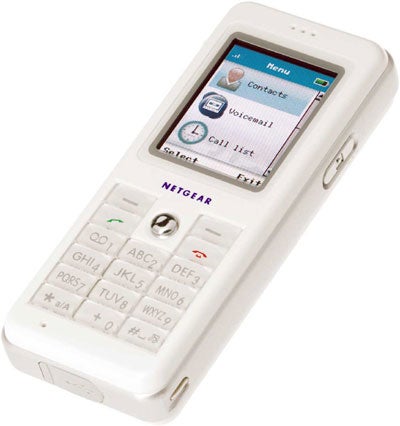 Good design extends to Netgear’s keypad as each key is squarer making for easier one hand operations. It has the same joystick at the centre of the left and right function buttons but this was not so pleasant to use as its sharper edges made for a sore thumb during extended operations. However, the backlight is far superior as all the keys are fully illuminated and easy to see in the dark. The 1.8in colour LCD screen on the SHP101 may be the same size as SMC’s but although Netgear doesn’t state its resolution it does look a lot sharper. We also criticised the WPSK100 for poor sound levels as it was difficult to hear it ringing in busy public places. Not so with the SPH101 as this has a speakerphone built into the back of the case making the ring tone much louder and far more difficult to ignore.


And now to the bad points. Both models have a charger socket in the base covered by a rubber plug but unlike SMC, the SPH101 kit doesn’t include a USB cable so you can’t top the battery up from your PC or laptop. Furthermore, although the SPH101 had a headphone socket at the side you don’t get a hands-free kit included. And another thing – the phone has rocker switches to the left and right hand sides for controlling volume levels and switching the speakerphone on and off but neither worked. You can control the ringer volume levels from the Settings menu but we couldn’t find any way of switching the speakerphone off.

On the SPH101 the power switch has been moved off the keypad and on to the top of the casing. Once powered up the phone will search for available wireless access points and display them for selection. Enter your key for those that have encryption switched on and you can save these details and use them for automatic logons. Be aware that the phone cannot run a web browser so any public hotspots that require this to log in will be unavailable. Once you have wireless Internet access the phone will offer you the opportunity to set up a new Skype account or enter details of an existing one.


The phone’s main display shows your status, how much cash is left in your Skype account, battery charge level and the signal strength of the wireless connection. A big disappointment is the miserable selection of ring tones available – surely Skype could have come up with something better than these three embarrassments. However, if you can’t face the idea of anyone else hearing them you can switch to a silent mode and use the vibration mode only. There are a number of call related limitations as you can’t engage in texting and the phone can only participate in conferences but not initiate them.

Contacts can be kept organised in the phone for quick access and the History option provides a complete rundown of inbound and outbound calls, those missed and voicemails. Searches for Skype users can be conducted and if permitted they can be added to your contact list. The Services option shows your credit status plus the amount of time remaining on it and if you purchased SkypeIn you can view your chosen number and your subscription status.


During testing we found the voice quality of the SPH101 to be vastly superior to SMC’s SWPSK100. The microphone is sited on the front panel rather than underneath and this location resulted in none of the irritating echoing that plagued SMC. Calling out to landlines resulted in good clarity and recipients were generally impressed as most were unaware that they were being called over Skype unless we told them.


If you’re in the market for a Skype phone then the SPH101 warrants closer inspection as Netgear scores highly on build quality, design and call clarity. However, it does have a few niggling faults and the level of call related features on offer simply don’t justify the price tag.