NAS aficionados will know that we think quite highly of Netgear’s ReadyNAS appliances as they offer an excellent combination of features, design and value. Traditionally, Netgear’s focus has been split between home and business users but its latest ReadyNAS Pro has the latter firmly set in its gaze.


Not only is this Netgear’s first six-drive appliance but its classy hardware specification delivers a performance that no other desktop NAS appliance comes remotely close to. The latest firmware upgrade also delivers IP SAN support allowing the appliance to present iSCSI virtual volumes. 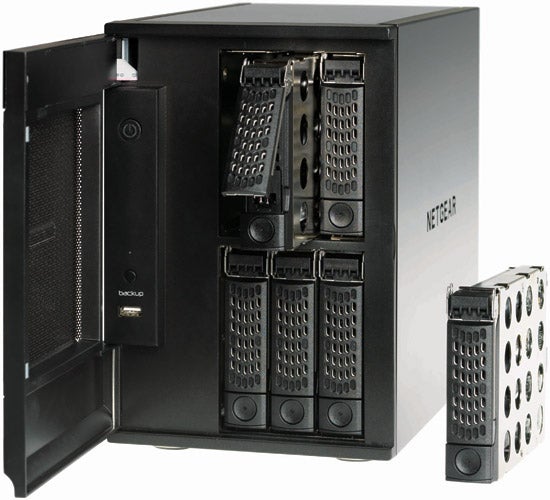 You have a 1.8GHz Intel Dual Core E2160 processor in the driving seat and this is supported by 1GB of 667MHz DDR2 memory. The side panel is easily removed and it’s possible to upgrade memory to a maximum of 4GB. Fault tolerant network connections are supported as the pair of Gigabit Ethernet ports can be joined together for load balanced or redundant link teams.


Three USB ports are provided and support external storage devices and printers. The front port teams up with the backup button alongside and this has a dual function. If you’ve defined backup jobs on the appliance and assigned them to the button then pressing it will run these in sequence. If not, then it will copy the contents of a predefined folder on the appliance to the attached device. 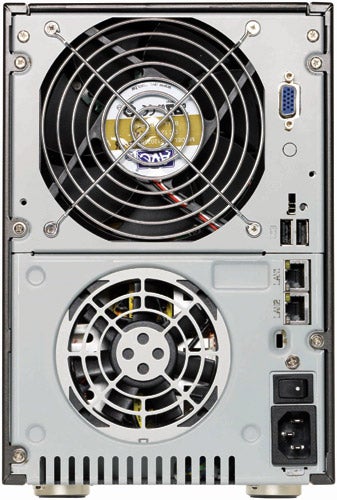 The ReadyNAS Pro supports all the usual RAID suspects but also adds RAID-6 dual redundant arrays to the equation. With six drive bays up for grabs this becomes more of a reality than with the current crop of four-bay appliances although we would recommend Netgear’s X-RAID2 instead.


X-RAID2 doesn’t require so much storage as RAID-6 and it has the added benefit of allowing the array to be expanded on the fly into new drives as they are fitted. Furthermore, you can upgrade hard disks simply by pulling them out one at a time at a time and replacing them with larger models where the array will be rebuilt in the background. Once you’ve replaced the last one the array will increase in size as determined by the new drive capacities.


The bundled RAIDar utility makes installation a cinch as it spots the unit on the network and provides easy access to the web interface. The latter is very well designed and intuitive and offers a quick start wizard that takes you through setting up shares and choosing a security mode, which includes AD authentication.

Client support is excellent as Windows, Unix, Linux and Mac systems are on the guest list and it offers FTP services on selected shares. For share creation, you provide a name, decide on the default access of read only or read/write and restrict access further to selected hosts if required. Share access can be controlled with the appliance’s user and group lists and quotas can be applied as well.


Businesses will have a particular focus on backup facilities and Netgear doesn’t disappoint. The Pro can run manual and scheduled jobs and supports a huge range of sources and destinations including other ReadyNAS appliances, local and network shares, FTP servers and local USB devices. Scheduled volume snapshots take regular point-in-time volume backups and you can even use the appliance as a destination for the Mac OS X Time Machine. 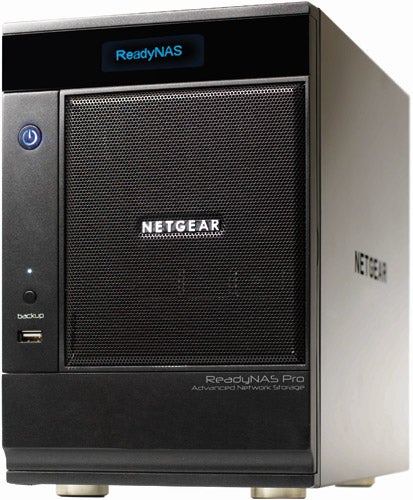 The new iSCSI feature is easily accessed from the Volume tab where you create targets, decide on their size and apply CHAP authentication if you wish. A useful feature is the option to expand them into available space allowing them to grow with demand. Netgear doesn’t provide an automated connection tool as found in Buffalo’s TeraStation II iSCSI but in reality, businesses that don’t understand iSCSI shouldn’t be using it.


To give the Pro a good workout in the lab we selected a dual socket, quad-core Xeon Dell PowerEdge 1950 equipped with 4GB of fully buffered memory, local SAS storage and running Windows Server 2003 R2. Firing up Iometer with eight disk workers assigned to a network share, we saw the Pro deliver incredible raw read and write rates of 108MB/sec over Gigabit Ethernet.


For iSCSI testing, we assigned a 50GB virtual volume to the Dell server using the latest Microsoft iSCSI initiator. With Iometer on the rampage again we saw the Pro return raw read speeds of 109MB/sec. We’ve had many dedicated – and much more expensive – IP SAN appliances in the lab that haven’t gone any faster than this.


The ReadyNAS Pro is master of the universe for performance as there is nothing else that comes even close to it at this price point. It’s well suited to businesses as it offers plenty of backup and security features, has a huge storage potential and now supports IP SANs as well. 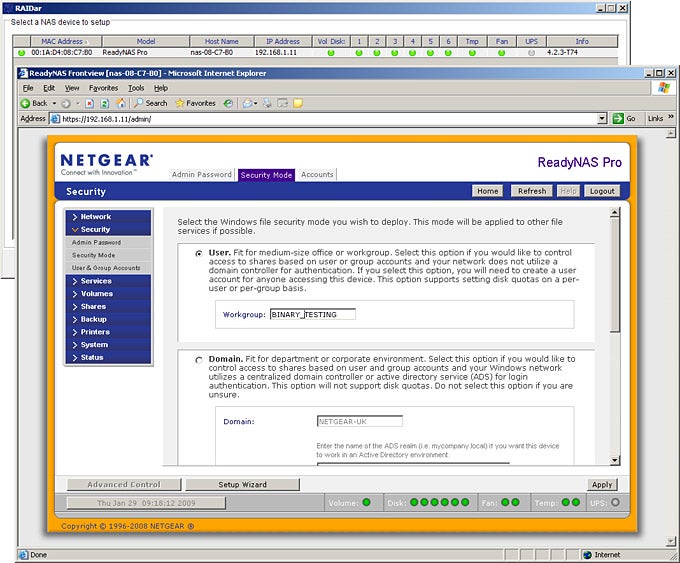 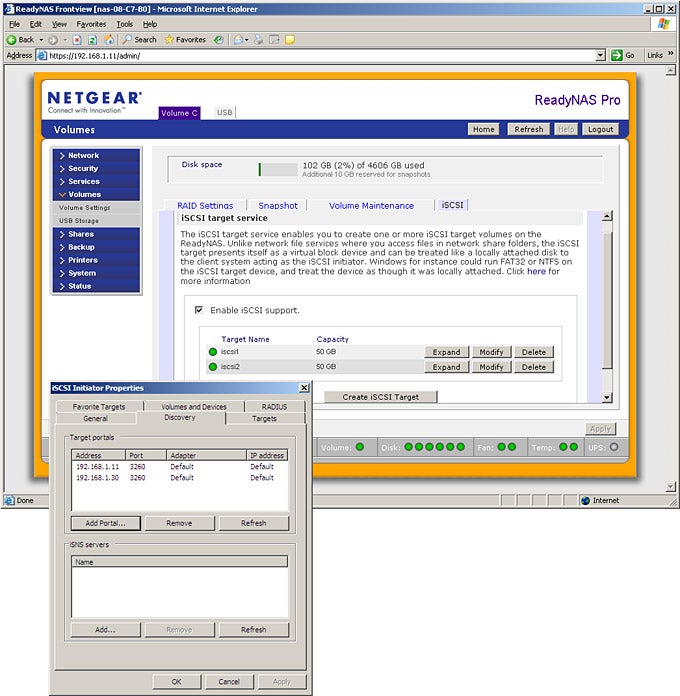 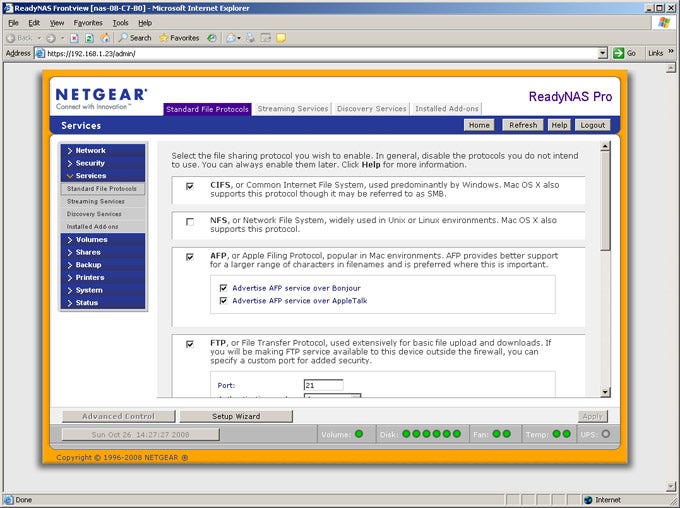 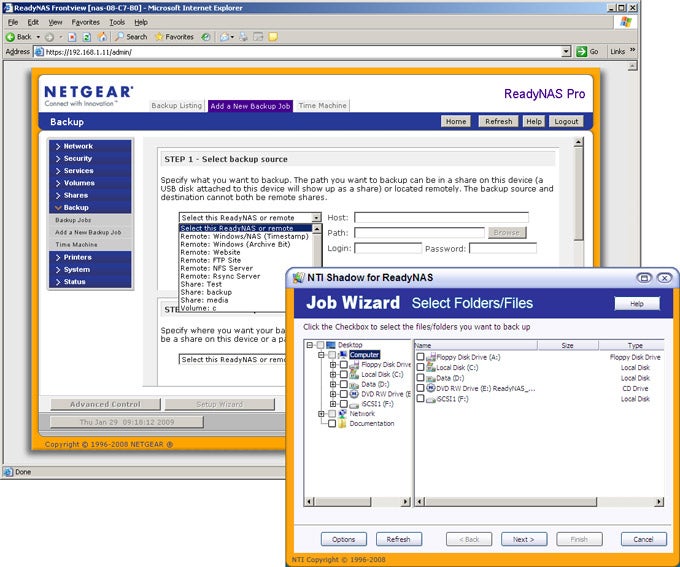 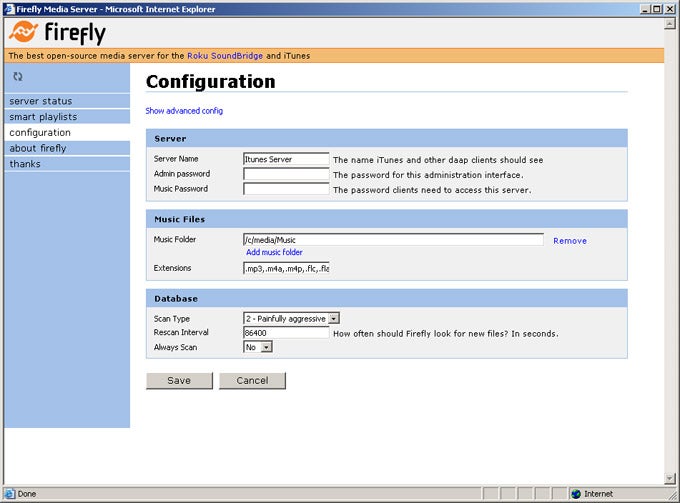