What is the Netgear RBK20 Orbi?

Although the original Netgear Orbi (the RBK50) was the first and, arguably, the best Wi-Fi mesh system available, its high price at launch has meant that it isn’t for everyone. In particular, the lower priced BT Whole Home Wi-Fi has proved to be a winner. It’s no surprise, then, that Netgear has seen fit to release a cheaper version, the Netgear RBK20 Orbi, as a result.

A dual pack, the system comprises of a router and single satellite, for a similar price to Whole Home Wi-Fi. For larger homes, a triple pack (the RBK23) is also available.

The Netgear RBK20 Orbi boasts a neat interface, and the robust tri-band design adds stability, but the price isn’t quite low enough to make this a must-have router, and the lack of Ethernet ports is a real shame.

Netgear’s entry-level Orbi system has a single router in the box, plus one or two satellites (RBS20), depending on the pack you buy. Router and satellites look similar, sporting the same physical case design. They’re effectively a shrunken version of the original Orbi. Measuring 168 x 142 x 61mm, the curved Orbi wireless devices are nice to look at and a little easier to place than the larger originals. 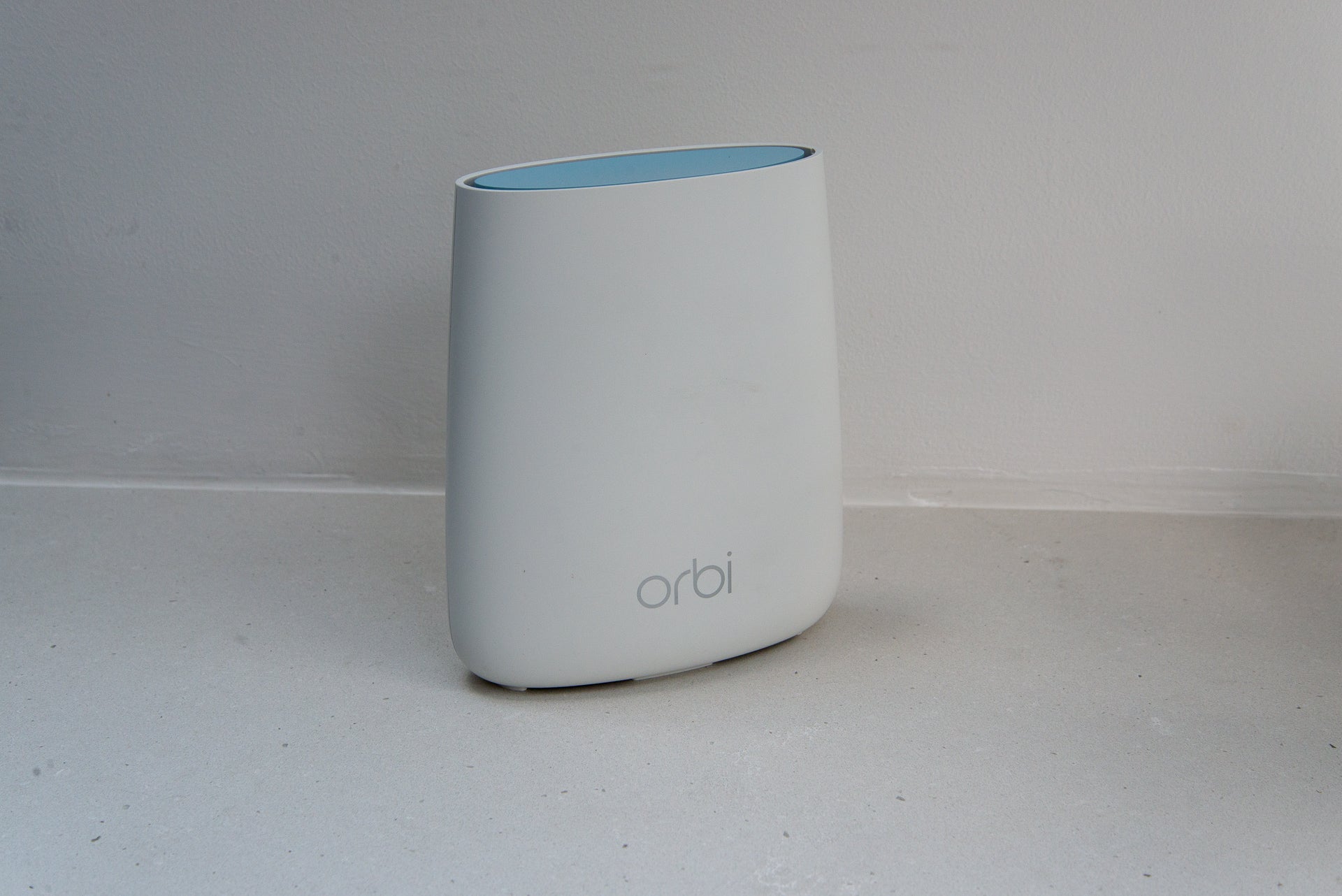 The router has a blue top to help you spot it, plus the rear has a yellow WAN port, which plugs into a modem. It’s also possible to run the RBK20 Orbi in access point mode, keeping your existing router, but then you’re effectively paying for features you won’t use. 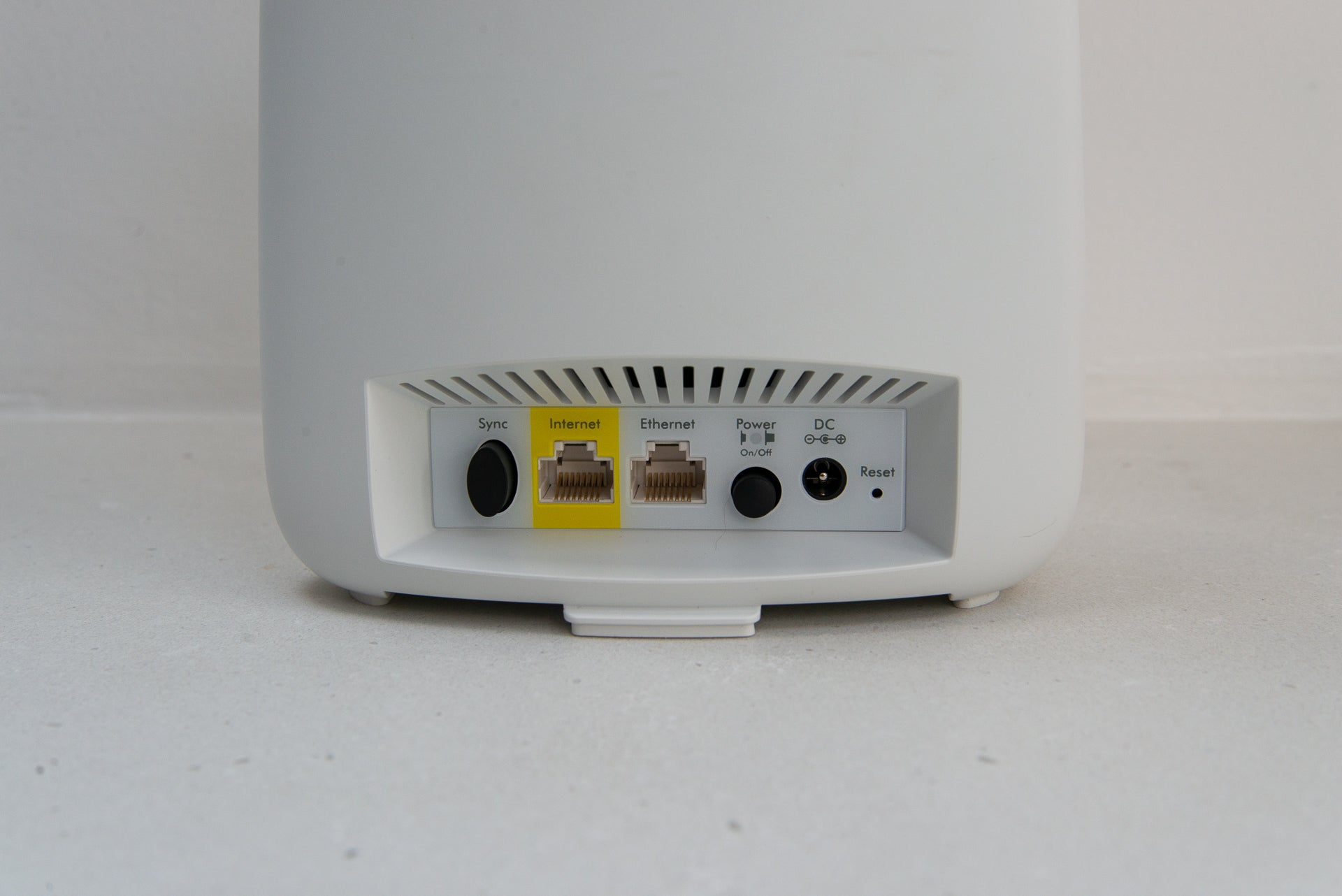 Each satellite has two Gigabit Ethernet ports, which you can use to plug in wired devices directly. Alternatively, you can hook up the satellite to the router via Ethernet, using this for the backhaul rather than using wireless. This can have the effect of boosting reliability and is also useful for extending your wireless beyond the range of the normal network – say, to an outbuilding. 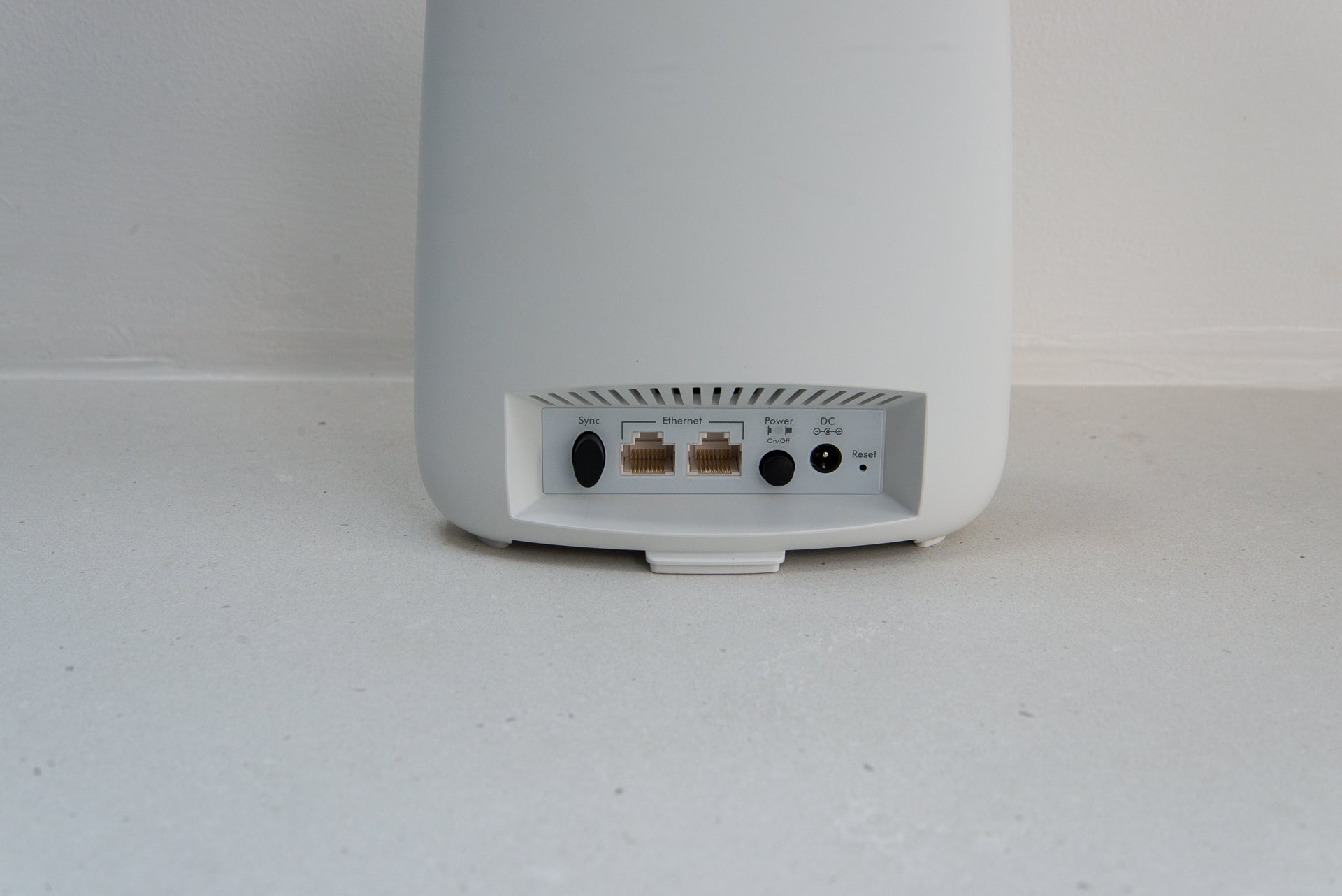 You can buy additional RBS20 satellites to extend your network, with the satellite compatible with all Orbi systems. Currently, I could find only one supplier that was selling an individual satellite at the high price of £164.

The RBK20 Orbi comes with a predefined and secure wireless network, although you won’t need the details for long, as the setup routine prompts you to add your own settings.

I used the app to set up the new system, which took me through connecting up the router and placing the Orbi satellites around my home. It’s simply a case of following the instructions, although the router wouldn’t connect to my broadband connection and I had to manually enter a username and password.

Once connected to the internet, it was a matter of checking the satellites, which have a colour code to show you what’s going on: blue means a strong connection; amber means weak; and magenta indicates that there’s an error. For the latter two, it’s worth trying to move the satellite closer to the main router.

From the app you can see what’s connected to your network and block per device, change the network name and adjust the guest network settings. As per other mesh networks, the Orbi system gives you one network name for both the 2.4GHz and 5GHz bands. Band-steering then automatically directs connecting clients to the strongest band, based on features, performance and range. 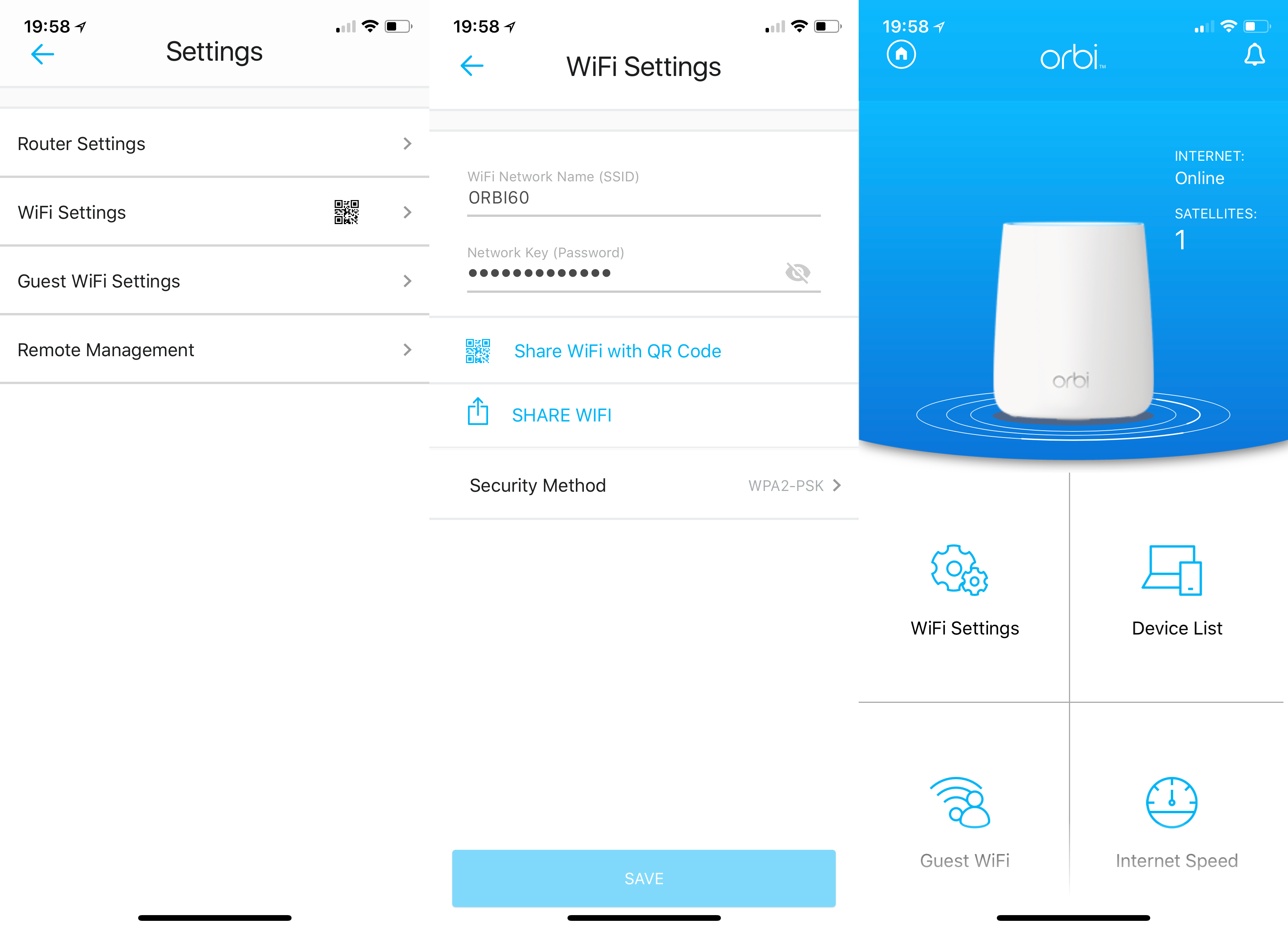 Switch to the web interface, and you can also adjust the chosen wireless channels. By default, the 2.4GHz network is set to Auto mode, and the 5GHz channel to 36. If you’re noticing unreliable or slow performance, choosing different channels may help.

From the web interface, you can also turn on BT IGMP support, which is needed if you have a YouView box and want to watch streamed live channels such as BT Sport. I found that I also had to reboot the Openreach modem, but after doing this I could watch BT Sport in 4K.

As with other Netgear routers, the RBK20 Orbi is quite advanced. From the web interface you can override the default DNS servers, set up port-forwarding and dynamic DNS. Really, there’s every feature you’d expect.

Related: How to speed up your internet 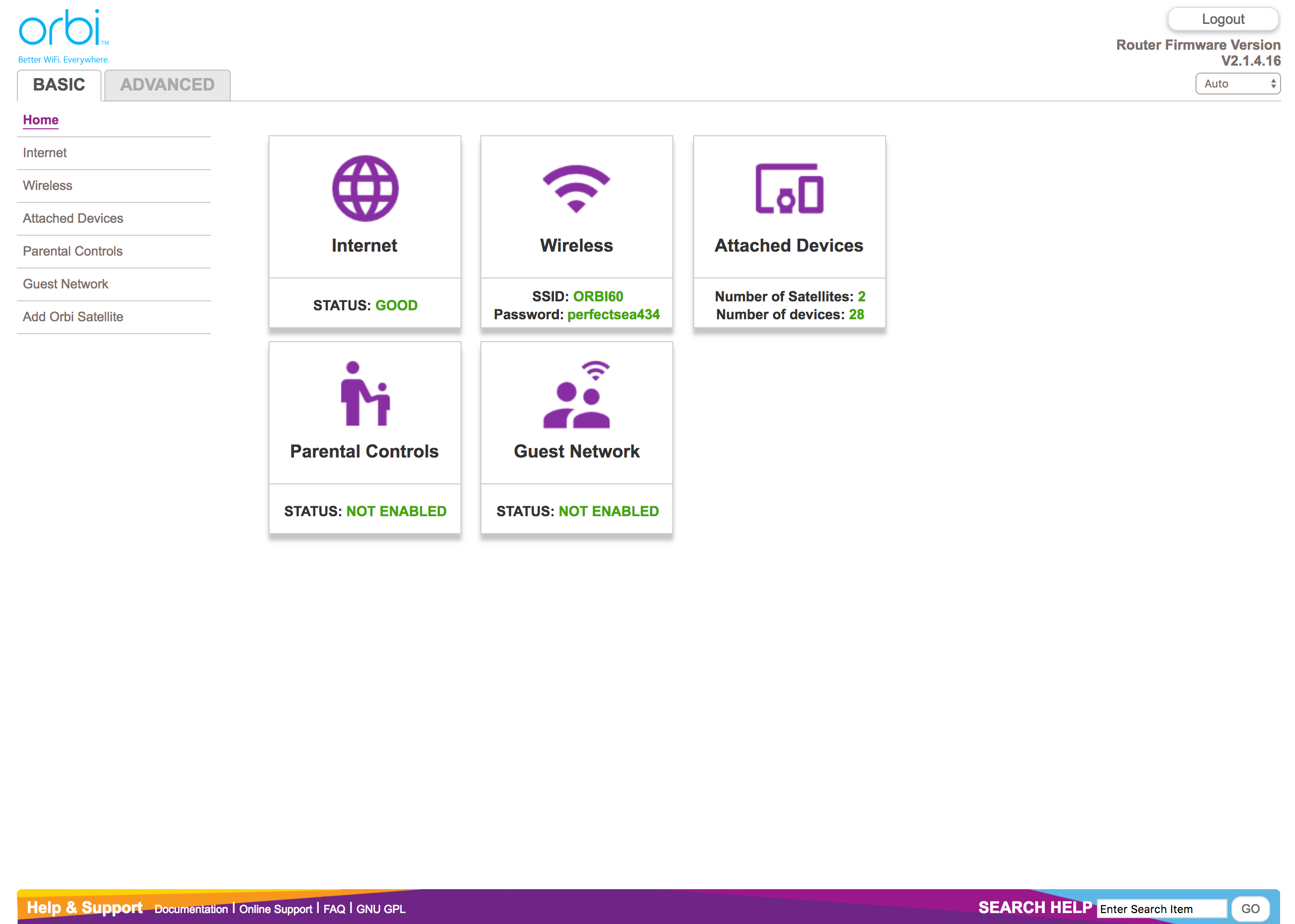 Both router and satellites use AC2200, which works out to one 400Mbit/sec 2.4GHz channel, and dual 866Mbit/sec 5GHz channels. However, one 5GHz channel is reserved for the wireless backhaul, providing a single, constant connection, rather than having to share bandwidth. MU-MIMO and beamforming are built in, which can boost performance.

Testing performance using the free Tamosoft network throughput test, results were good for close-up, but performance dropped over range. I used three devices: the main router at the front of the house, where the broadband service came in; a satellite in the middle of the house, on the first floor; and a satellite at the rear of the house in the kitchen. 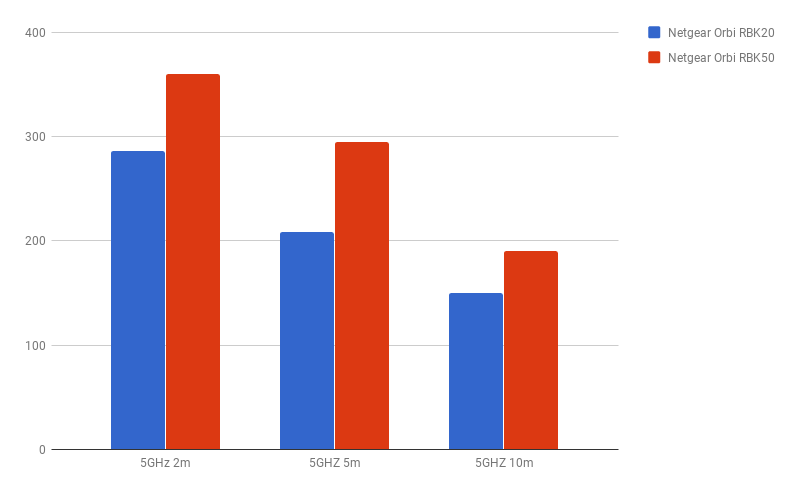 Moving to the rear of the house, I found the satellite displayed a very poor signal to the router. Wiring it in via Ethernet fixed the issue, but demonstrated that the RBK20 Orbi was having trouble at range in my house. With the satellite working, I saw upload speeds of 214.61Mbps and download speeds of 326.06Mbps in the garden – usually a bit of a dead spot. Overall, speeds were similar to the BT Whole Home Wi-Fi.

Rather than having its own parental control software, Netgear provides Circle with Disney. Controlled through a separate app, Circle lets you create profiles for family members, letting you regulate what each person can see and access.

For each profile, you can add a list of devices that belong to that particular person, so web filtering works on all devices. Trying to find the right device can be tricky, as you just get the list of names pulled from the Orbi router, and these aren’t always clear and don’t necessarily match up to the name of a device.

You may need to do a bit of snooping, checking RBK20 Orbi’s DHCP settings, and then matching up IP address on your devices to discover what they’re called on the network.

For each profile, you can manually pause internet access, which is handy if you want to get a child’s attention, and you can view through the web history.

If you want to set time limits and add in a bedtime when the internet is blocked, plus get a few more advanced monitoring tools, you have to subscribe to the Premium version, which costs £4.49 a month. 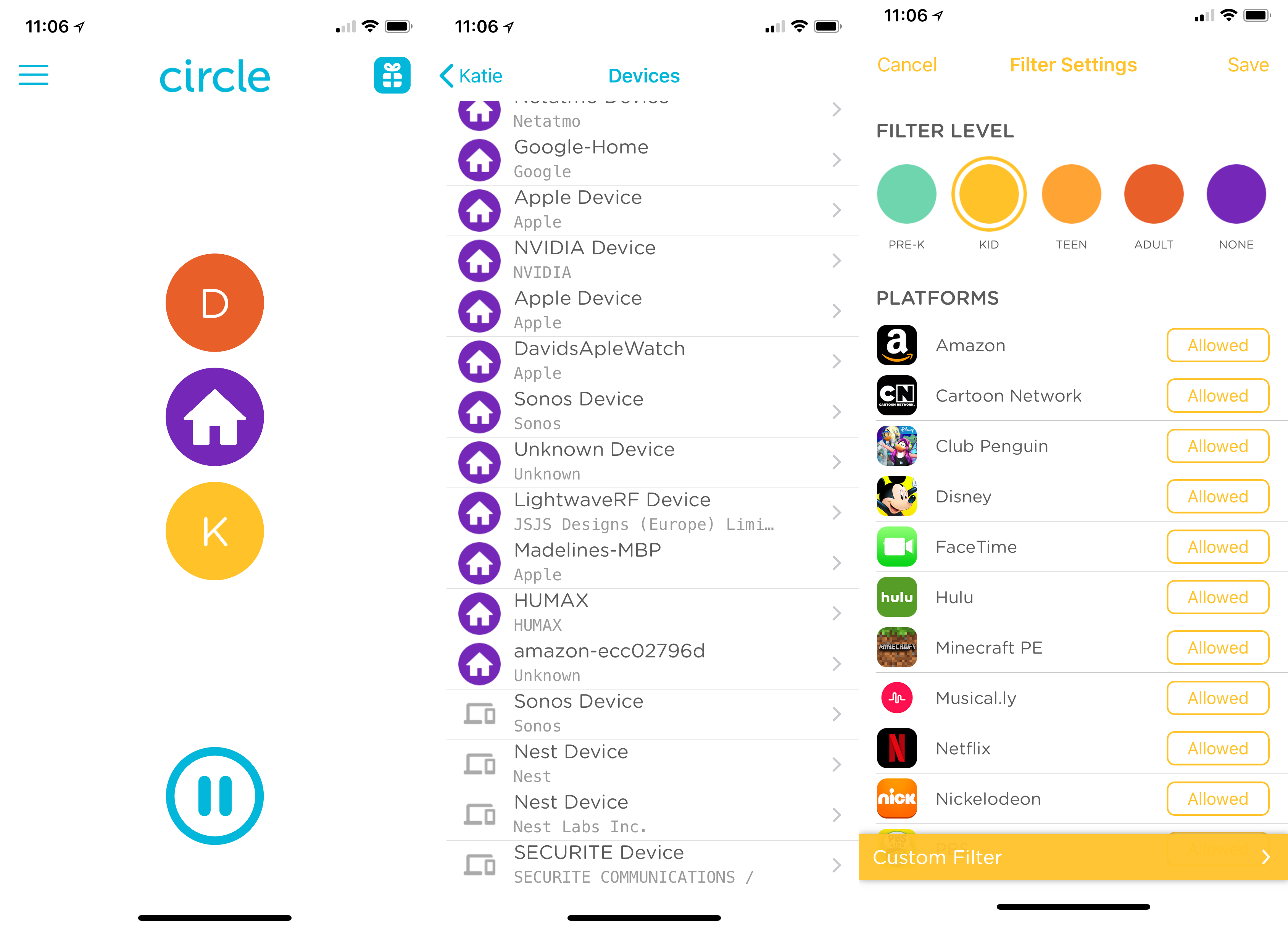 Netgear has an Amazon Alexa skill. Provided you have a Netgear account set up, you can link Alexa to your router. This lets you enable or disable your guest network and reboot your router with your voice.

You can also have Alexa dish out your wireless network settings. On an Echo Show, the network name and password are displayed on-screen, but they’re also sent as a card to the Alexa app. The latter is the only choice with voice-only Echo devices.

Strangely, despite the Orbi having only one wireless network name, the Alexa skill lists the 2.4GHz and 5GHz networks individually, albeit with the same details.

Why buy the Netgear RBK20 Orbi?

As a BT Whole Home Wi-Fi competitor, the RBK20 Orbi does a good job. A two-pack is a similar price and a three-pack (RBK23) is £80 more. That sounds significant, but it’s important to remember that the RBK20 Orbi is also a full router; the Whole Home Wi-Fi works with your existing system. If you have an older router and want to upgrade everything in one go, there’s a lot to like here.

The difficulty in recommending the RBK20 is that at current offer prices, the faster, bigger RBK50 Orbi is currently only £20 more expensive than the RBK20 Orbi twin-pack. And, the RBK50 is cheaper than the triple-pack RBK23, yet offers similar wireless range from its router and single satellite. The RBK50’s router has three Gigabit Ethernet ports, and its satellite four. On balance, the RBK50 is the superior product and well worth paying the small amount extra.

That said, the RBS20, when more widely available, could make a useful add-on to an existing Orbi system, in instances you want to extend coverage with a smaller and more convenient satellite.

A reliable and well-featured wireless system, but its bigger and better brother is only slightly more expensive, making the RBK20 hard to recommend.