Netgear’s marketing hype about its latest wireless router makes for good reading. It claims a 1000 per cent improvement in coverage and speed over 802.11g products and a total of half a million square feet of uninterrupted coverage.


As expected, MIMO (Multiple Input Multiple Output) is the technology behind the scenes. But whereas Belkin’s Pre-N wireless router uses a triplet of external aerials Netgear has craftily hidden them inside the casing. Not only that, but there are no less than seven of them. Netgear’s ‘Smart MIMO’ feature aims to monitor for interference from the likes of walls and other obstacles and constantly modifies the aerial’s setup by choosing the best one from a selection of 100 configurations. If, for example, you move your laptop from one room to another then the router should sense the change in interference and adjust itself automatically to provide the best signal strength.


Physically, the router is a compact slab of plastic that conforms to Netgear’s common design policy. One feature that does make it stand out is the large blue dome on the top panel. This is to remind you just how many aerials Netgear has managed to fit in as it has blue LEDs on its circumference for each one and they flash to tell you which are active and which direction the signals are coming from. It seems a fun idea but when we tested in a typical home environment the lights endlessly circulated like some demented space craft and it quickly became tedious. 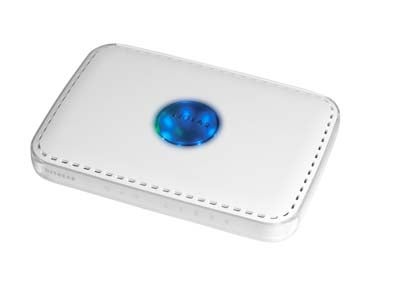 Four switched Fast Ethernet ports are provided for LAN connections but if you need more you can easily cascade another hub or switch from them to increase the port count. Note that you don’t get an internal ADSL modem so you’ll need to source one with an Ethernet connection. The front panel provides a simple display showing active LAN ports along with connection status and activity for WAN and wireless links.


Netgear has perfected its installation routine and it’s a simple process of connecting your PC to a LAN port, adding your DSL modem to the WAN Ethernet port and popping the supplied CD-ROM into an optical drive. The setup routine hunts down the router automatically, checks the Internet connection details and configures itself accordingly. Suffice to say, we had Internet access up and running for our BT Broadband connection within ten minutes of unpacking the box. Even better is that after first contact with the web browser interface it’ll immediately check with Netgear’s web site to see if there’s a new firmware version available. 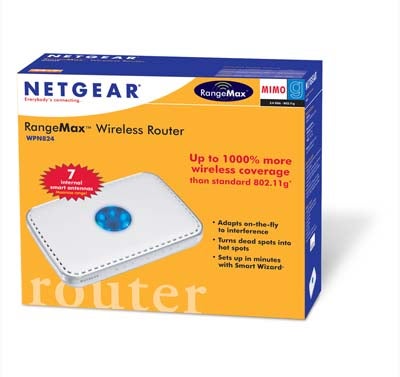 Inevitably, the burning question is whether the WPN824 delivers on Netgear‘s claims for speed and coverage. We used a 1.6GHz Fujitsu Siemens notebook running Windows XP SP2 and fitted with Netgear’s RangeMax WPN511 wireless PC Card. With a line of sight connection of five metres the open source Iometer reported a very respectable 43.2Mb/sec over an unsecured link and moving to a secure link over WPA-PSK saw this drop to 34.4Mb/sec. These figures put Netgear’s RangeMax on a par with Belkin’s Pre-N products.

We were impressed with MIMO’s range capabilities and found it delivered exceptional coverage in a normal home environment. Moving the test scenario into an office complex with far more barriers in the way still produced some good results. Positioning the laptop some fifty metres away down the end of a corridor with two large fire doors in its path saw performance for an unsecured link drop by around 25 per cent. We then did a complete circuit of the first floor and found one dead spot about sixty metres away in a straight line although this did have a steel reinforced concrete floor, three fire doors and four other offices in the way.


Along with good performance and range the WPN824 delivers a reasonable level of features that are standard across its range of multi-function wireless routers. For Internet security you get NAT plus a standard SPI firewall that defaults to blocking all unsolicited inbound traffic. Web access restrictions are nothing special however, as the router implements simple URL filtering so you’ll have to manually create lists of sites you want to block. However, you can use a single schedule to apply blocking lists at specific times of the day or week. Email alerting to one address is supported and a message can be automatically sent by the router if it detects an attack or a user attempts to access a banned web site. Wireless security extends to SSID masking, MAC address access lists, 64 and 128-bit WEP plus WPA encryption. For the latter, Netgear now only offers PSK (pre-shared key) encryption and has removed support for 802.11x authentication via a RADIUS server. Considering the range this router has, we would strongly recommend implementing at least one of the available security measures. 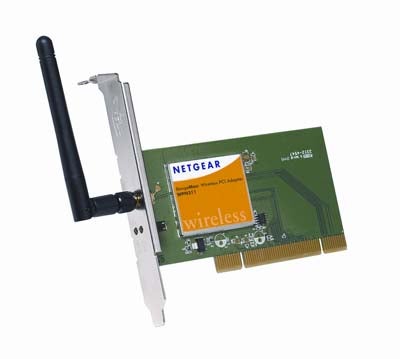 
There’s no denying MIMO wireless products deliver in the performance and range stakes and Netgear’s WPN824 offers a good selection of features suited to home users and small businesses alike. Of course, the downside is that to get these speeds you’ll have to purchase Netgear’s accompanying RangeMax PCI and PC Card products. Though this means losing the convenience of the built-in wireless that so many laptops are now equipped with, the speeds benefits of making this switch are palpable. And as with the router itself these products are available at competitive prices.