Netgear has been quiet on the wireless front for far too long. While the competition has been busy churning out variations on the wireless-N theme Netgear’s last significant product was its Gigabit-equipped WNR854T, which we reviewed over a year ago. The latest WNDR3300 not only remedies this situation but it delivers an interesting mix of features with dual-band wireless at the top of the list.


For design Netgear has taken a leaf out of Belkin’s book as it has ditched its clinical white casings and gone for a slinky gloss black finish top and bottom. The router has no less than eight aerials inside, which link up with the trademark blue dome on the top. These are supposed to flash to tell you which ones are active and where the signals are coming from, but after a while we just found it irritating as the LEDs are very bright.

Unfortunately, unless you disable the radios you’re stuck with them as the option on previous models to switch the dome LEDs off from the management interface is no longer present. However, the dome now has another purpose in life as it can be used for push-button WPS (WiFi Protected Setup) connections with wireless clients.


A modicum of status LEDs are sprinkled across the front panel with indicators provided for the LAN and WAN ports, both 5GHz and 2.4GHz radios and power. Alas, Gigabit Ethernet isn’t on the menu as all you get at the rear is a quartet of switched Fast Ethernet ports and a separate RJ-45 WAN port that accepts a suitably equipped ADSL or cable modem. This does make the top claimed speeds of 270-300Mbps rather academic as these will never be achieved between LAN and WLAN users.

Netgear has installation down to a fine art as the CD-ROM based setup utility helps you connect the router and checks your Internet connection is working. If, like us, your modem is already configured with an ISP account and running a DHCP server then there’s virtually nothing to do except plug everything together as instructed. If the setup utility likes what it sees it’ll transport you to the router’s main web interface and lets you get on with further configuration.


On first contact with the router, the web interface does a quick reconnoiter of Netgear’s support site to check for new firmware upgrades and then lets you into the interface. For wireless settings you have an interesting selection of modes. You can have simultaneous support for the 5GHz and 2.4GHz ranges each supporting 270Mbps and 54Mbps speeds respectively or you can go for 270Mbps 2.4GHz instead. You can also opt for single channel wireless-N for both modes which drops speed to 130Mbps. To be honest none of these speeds are achievable in the real world but at least Netgear has stopped the dubious practice of advertising these speeds on the product packaging.

Netgear’s web access controls are nothing special as all you can do is manually create a list of blocked domains or URLs that match a list of up to 255 keywords. There’s no option that allows you to block all Internet access except to only those sites you list. The Internet Access QoS (quality of service) settings could prove useful as you can choose from a predefined list of online games and assign one of four priorities to them. You can add your own custom applications if you wish and QoS priorities can also be applied to specific LAN ports and MAC addresses. For the latter the router displays all currently connected systems making it easier to provide the relevant address.

For testing we installed Netgear’s new WNDA3100 dual-band Wireless-N USB adapter in a 1.6GHz Fujitsu Siemens notebook running Windows XP SP2. The bundled utility makes very light work of wireless connections as it scans for access points, works out which encryption scheme is active and, once you’ve entered a key, sets the connection up for you.Usefully, the LED on the side of the adapter glows blue for an 5GHz connection and orange if it’s 2.4GHz. 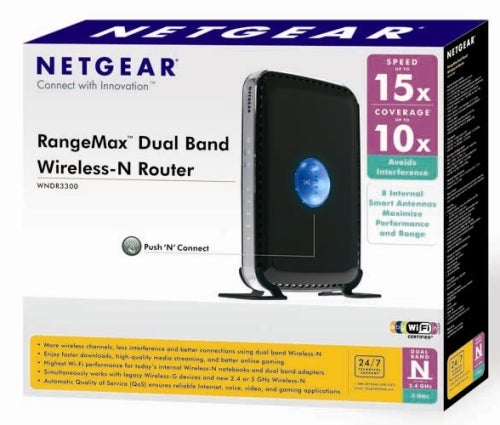 Real world performance proved to be a disappointment as with the fastest dual band mode selected a copy of a 690MB video clip returned a modest 48Mbps over a close range WPA encrypted connection. However, we did see improved signal strength when the laptop was moved to the floor below with three brick walls in the way as this dropped to around sixty per cent – most wireless-N routers fall below fifty per cent. It was sunny day as well so we caught some rays in the garden and with the laptop twenty metres away signal strength held out at around 75-80 per cent.


The dual band feature is capable of improving wireless range and makes the router comparatively good value. However, Gigabit Ethernet isn’t on the menu, wireless performance is nothing to write home about and we were also concerned that during our wireless tests the router hung on a number of occasions when we changed the wireless mode and had to be rebooted to clear it.

(centre)”’QoS allows one of four priorities to be applied to selected applications, LAN ports and MAC addresses”’(/centre)