By knocking back a wireless band, the Netgear Orbi WiFi 6 Dual-band Mesh System (RBK353) is much cheaper than the other Wi-Fi 6 Orbi products. It's still a good performer, too, and it's nice to see a decent collection of Ethernet ports, too. However, the system is still quite expensive and you can get similar performance for less with other products.

Wi-Fi 6 may be the future of home networking but the initial products, particularly the mesh systems, have been rather expensive. Now, with the Netgear Orbi WiFi 6 Dual-band Mesh System (RBK353) you can have a Wi-Fi 6 mesh system with one router and two satellites for just £250.

The catch is that this system has fewer wireless streams and it’s only a dual-band system, whereas most of the Orbi line-up is tri-band.

The original Orbi WiFi 6 product was quite chunky, but the RBK353 is much smaller. In the box, you get one router and two satellites, although there’s a cheaper version with two satellites (the RBK352). Each device is a small box, with rounded edges (178 x 145 x 61mm). They’re easy enough to position where you want them. 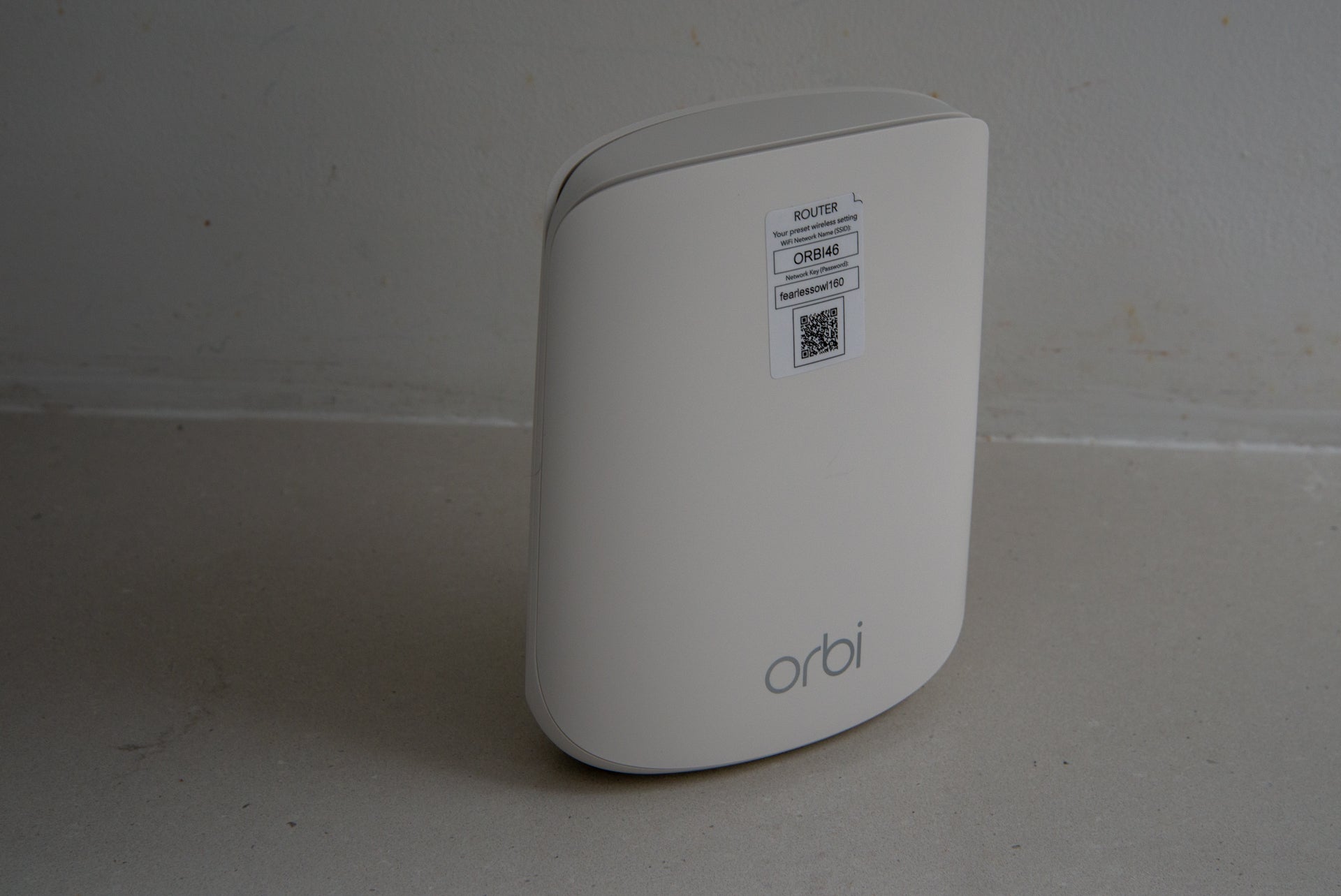 The router needs to be connected to your internet modem via its Gigabit Ethernet WAN port. Note that you don’t get the faster 2.5Gbit/s port that you get with the more expensive Orbi system. Even so, it’ll be some time before UK internet speeds reach a point that this connection is a bottleneck.

You also get three Gigabit Ethernet ports for connecting devices, which gives you a fair amount of scope. 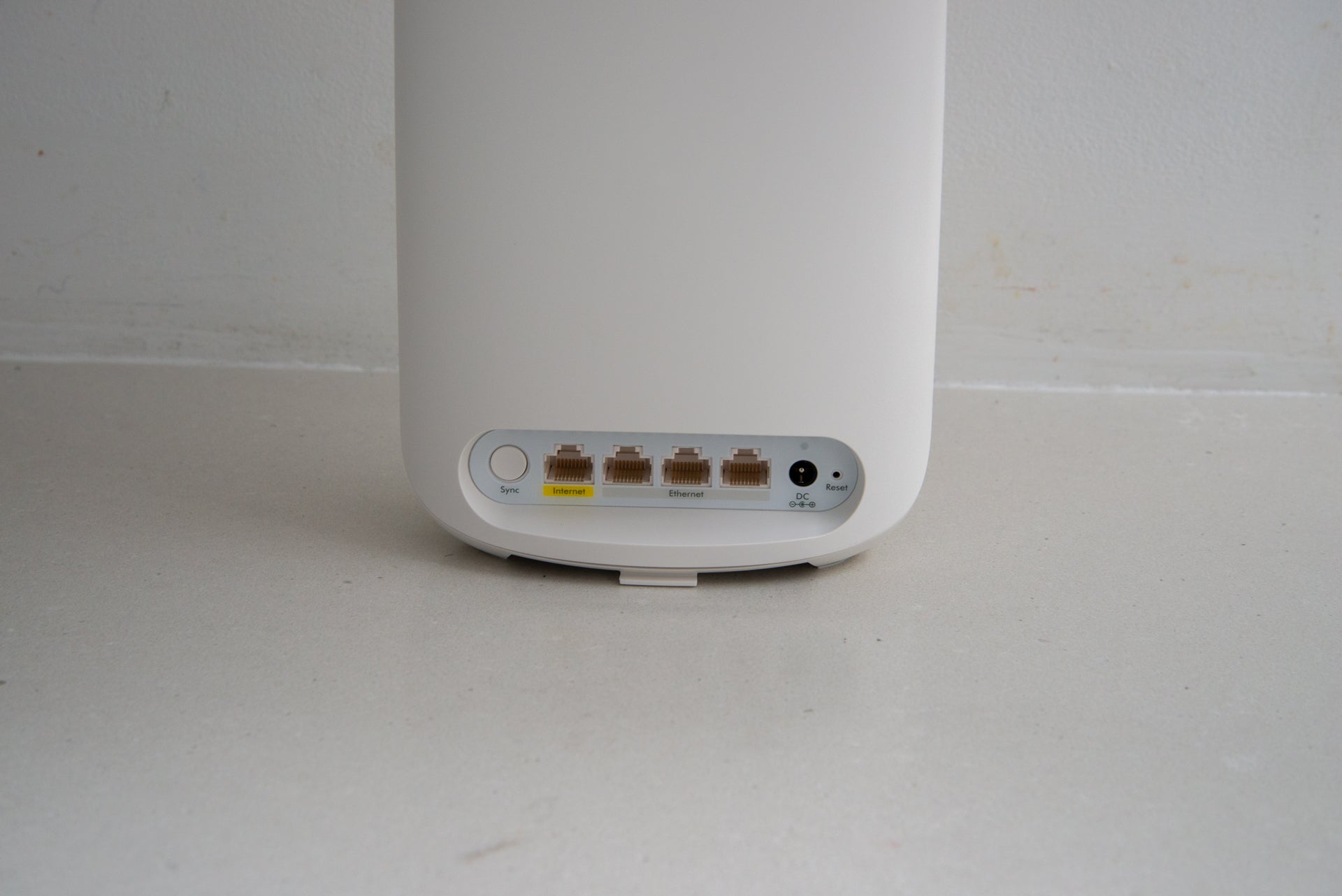 Although the Satellites look physically identical, they have two Gigabit Ethernet ports on them. That’s one more than on the Netgear Nighthawk Mesh WiFi 6 system. Not only can you connect more devices to the satellites, but there’s one added bonus: if you decide to connect the Orbi satellites together via Ethernet, you still have a spare port. 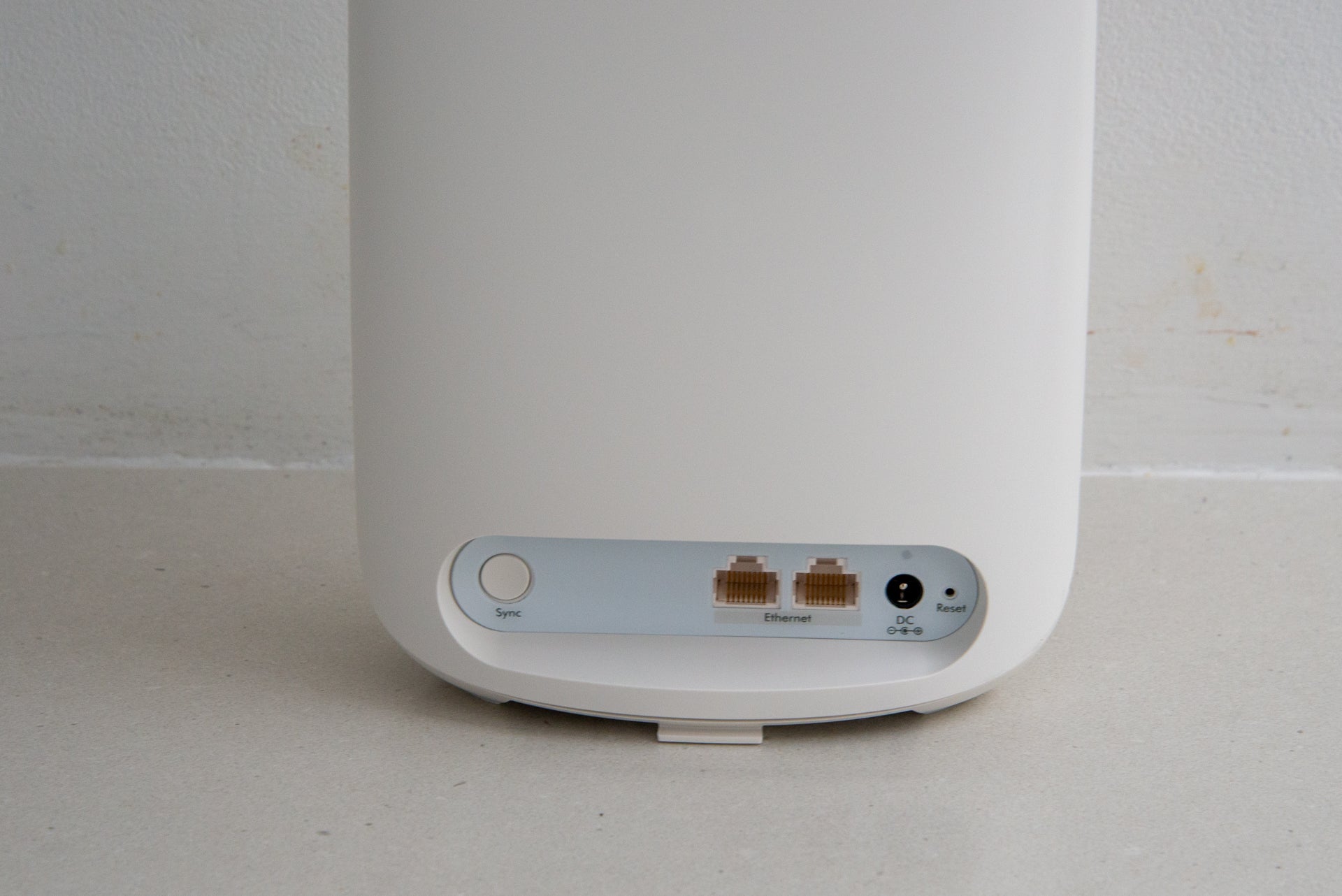 For most people, the Orbi system will be configured in wireless mode, with the router and satellites communicating via Wi-Fi 6.

Setup is via the Netgear Orbi app, which takes you through placing the router, connecting it to your internet and getting the satellites in place. It takes a few minutes to get everything done and, at the end, you have a secure wireless network ready to go.

For the main, the RBK353 is controlled via the Orbi app from your phone. If you’re signed into a Netgear account, then you can also remote control the system, even rebooting it when you’re out and about. It’s a handy troubleshooting tool.

From the app, you can see what’s connected to your network, and you can change the network name and password. You can also enable or disable the guest network, too. In fact, for the most part, it gives you all the level of control that you need day-to-day.

From here you can turn Netgear Armor on and off. This is a security system, powered by BitDefender, which protects all of your devices from internet security threats. Given the increase in attacks against smart devices, it’s a useful tool to have if you want it. You get a 30-day trial in the box, although you then have to pay £59.99 per year to extend your coverage. 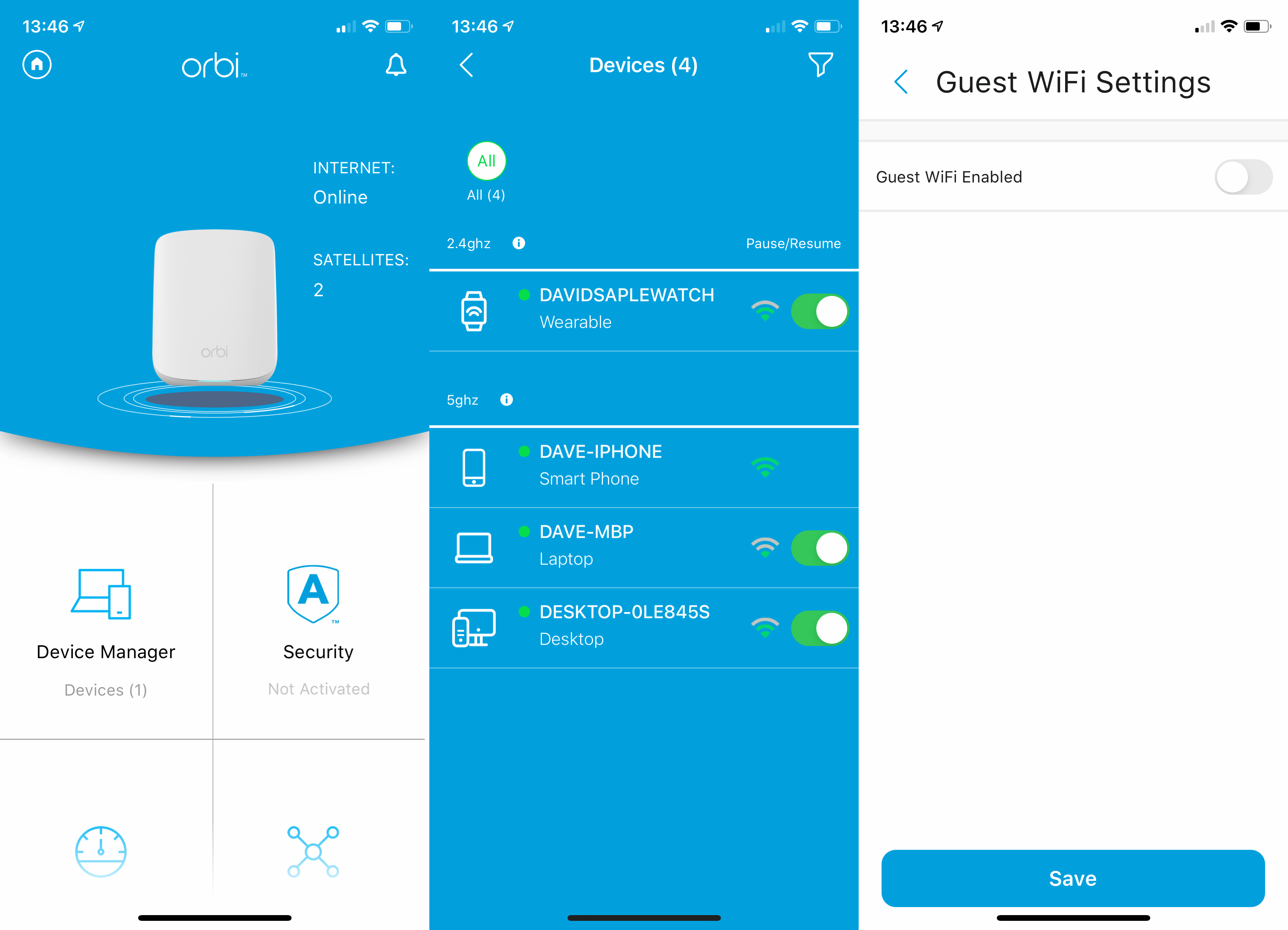 What you don’t get is Circle parental controls, which so far is not available on any Orbi WI-Fi 6 system; it’s only available on the older Wi-Fi 5 Orbi systems. That’s a real shame, as it’s a useful tool to have for parents, giving you internet filtering and access control features to children’s devices.

There’s a web browser interface, too, which replicates the features you get in the Orbi app, plus you get a few extras. From here, you can choose which wireless channels you want to use, and you can also turn on BT IGMP support, which is required if you have BT TV delivered via a set-top box. 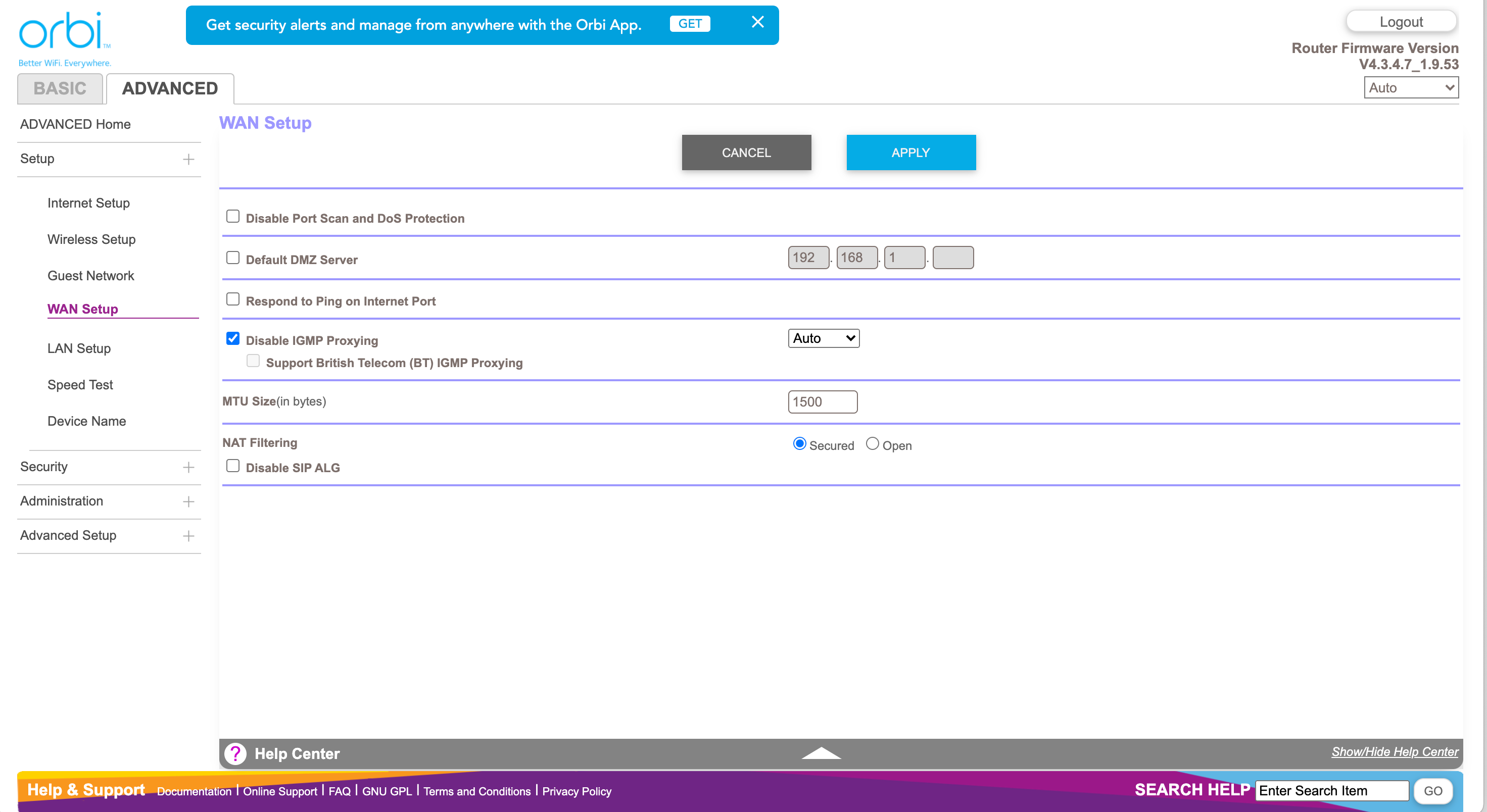 It’s via the web interface that you get access to less frequently used features, too, such as port forwarding. For the most part, however, you shouldn’t need to roam beyond the Orbi app.

Netgear has support for Amazon Alexa and Google Assistant, so you can use your voice to retrieve your current wireless settings and to turn the guest network on and off.

As the baby of the Wi-Fi 6 range, the system runs a dual-band AX1800 network, which means that there’s no dedicated wireless network for communicating between satellites. Instead, clients and network communication needs to share the two networks.

Four streams per device, means a total of 12 streams around your home. If you place your satellites well, then, you get a fair amount of bandwidth per device. Wi-Fi 6 is backwards compatible with Wi-Fi 5 although you lose some of the speed benefits and bandwidth sharing isn’t so good, as you can see in the explainer, what is Wi-Fi 6?

That’s very similar performance, as you can see from the graph, to the Netgear Nighthawk Mesh WiFi 6 System. 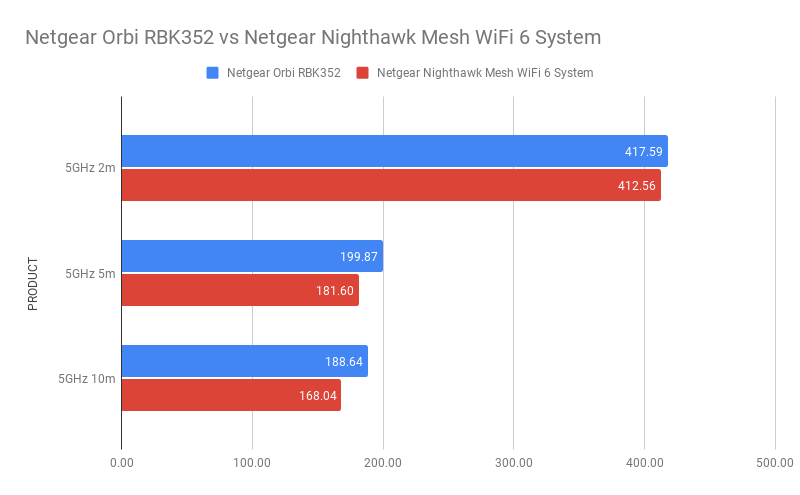 Compared to RBK852 and this new system is a fair way behind. The bigger Orbi has far more channels and a lot more power, although it is a lot more expensive. It has to be said that the older Wi-Fi 5 Orbi products, which have a dedicated backhaul do better on the first floor in my house, although they struggle at greater range. 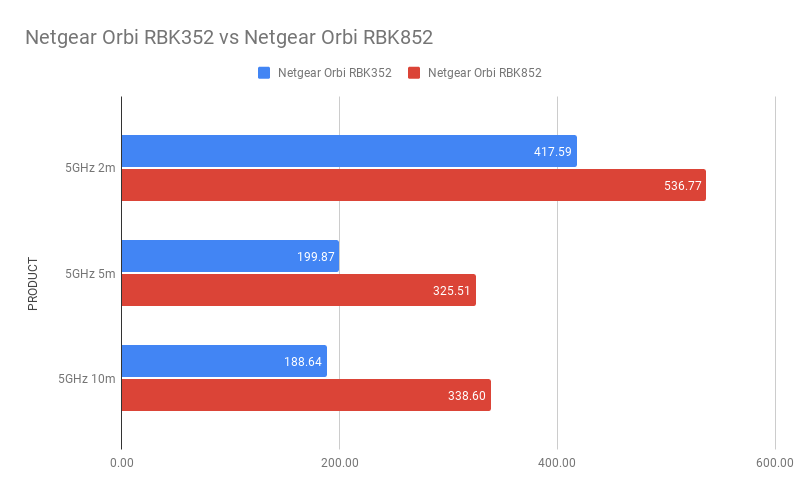 Thanks to the third satellite, I could even get reception in my kitchen, which usually suffers. Here, I got throughputs of 174.25Mbit/s. For the price, the new Orbi RBK853 is a decent performer.

If you want the ultimate power, then the Netgear Orbi RBK852 is a great choice. If you’re after a cheap Wi-Fi 6 system, then the RBK353 certainly fits the bill. If you can wire your home, then you can connect the satellites via Ethernet getting rid of the main downside: there’s no dedicated wireless channel for communication. However, the Netgear Nighthawk Mesh WiFi 6 System has to be taken into consideration, as this is even cheaper. Sure, it has fewer features and satellites have a single Ethernet port, but if you’re after cut-price Wi-Fi 6 system, it’s better value. If you’re after something else, check out the guide to the best routers.