A clever, well-implemented device – the Netgear Orbi Voice gives you everything you need, but suffers from a few limitations out of its control.

With wireless mesh systems, smart assistants and speakers in every room, you may feel as though your home is slowly filling up with small boxes. Wouldn’t life be better if you could combine some of these features into one box? That’s the idea behind the Netgear Orbi Voice, which combines a wireless satellite and Amazon Alexa smart speaker into one.

It’s available in two packages: one as a set with an RBR50 router and the RBS40V Alexa speaker (around £429); the other a smart speaker alone to connect to an existing Orbi system (around £280). The combination is a powerful and potent one, with Netgear Orbi remaining my favourite mesh system. But there are some Amazon-caused issues that make the Orbi Voice less flexible than it could be.

The Orbi Voice is slightly bulkier than the RBR50 router, but there isn’t much in it. Both devices sport roughly the same shape, although the Orbi Voice has a material finish that makes it look more like a high-end speaker (which it is). At the bottom you’ll find a set of fins, designed to push out air when the speaker’s in full force. The RBS40V is a neat-looking and well-made bit of kit. 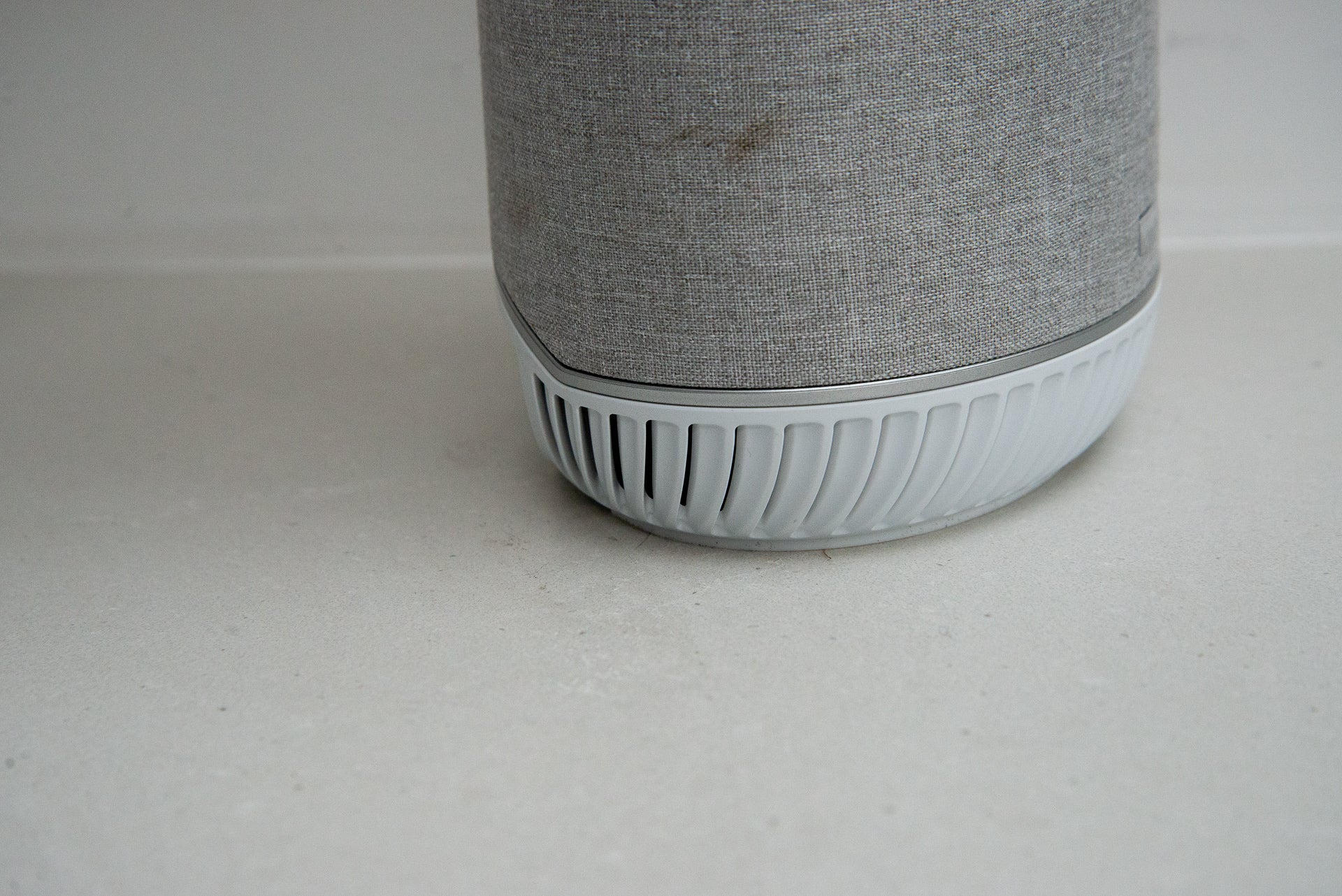 Around the back, the Orbi Voice is more standard router than speaker. There are two Gigabit Ethernet ports, a power button, power input and a sync button for joining the Voice to your network.

It’s a shame not to see at least one more Ethernet port, although the inside’s are fairly well packed with speaker and wireless kit, so I can understand why there are only two. 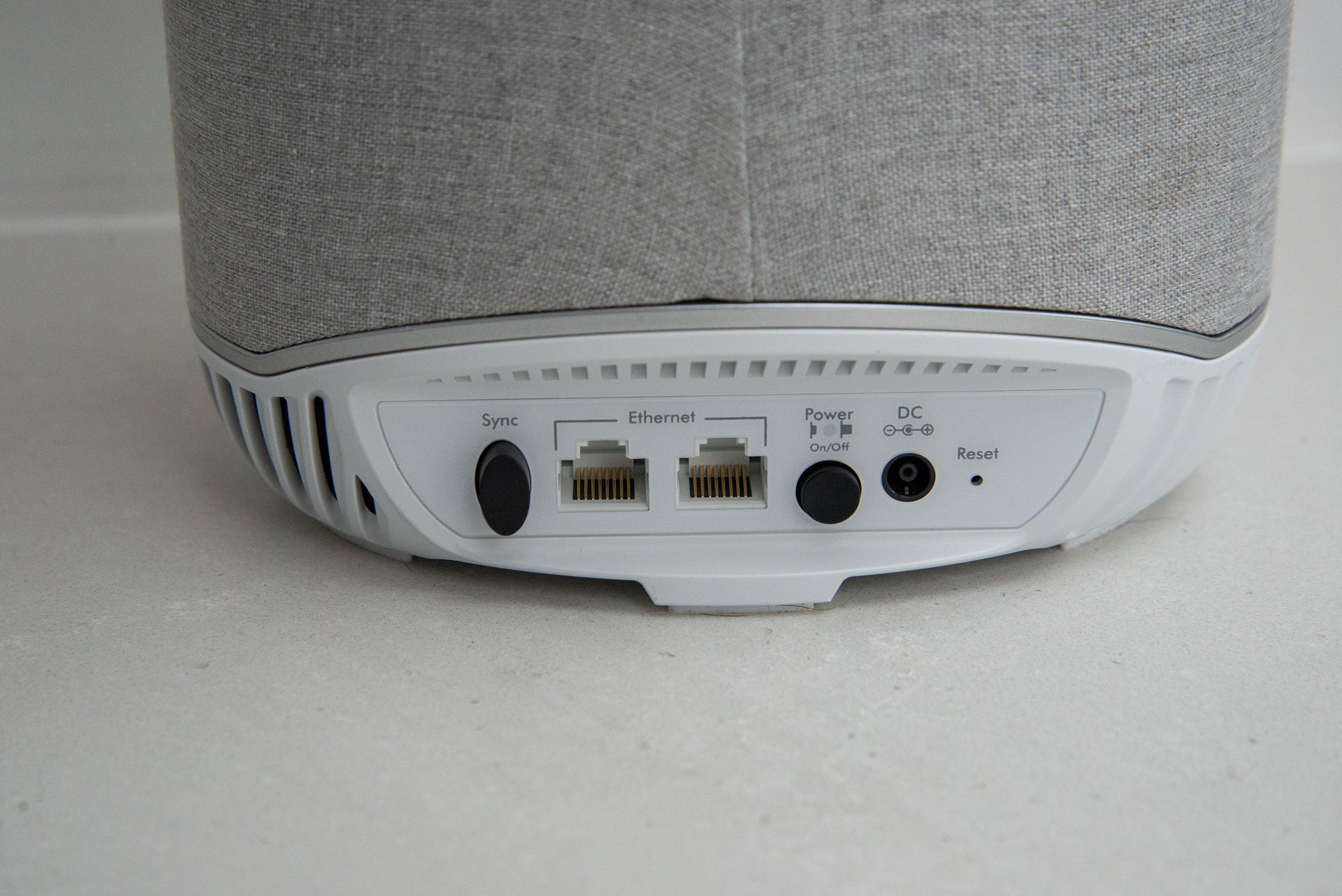 You’ll find touch controls on top of the satellite. There’s a button to mute the microphone, a slider to control volume, and an activation button that turns Alexa into listening mode.

Once the Orbi system is set up, you have to use the smartphone app to configure Amazon Alexa. It’s simple to do: just click the prompt, sign into your Amazon account, pick your language and you’re done. Well, that’s the theory. The first review unit that I had was broken, with the microphones refusing to respond to any voice commands. The second unit worked perfectly.

I’ve covered in more detail what the voice assistant can do in my Amazon Alexa guide. The short version is that you can get weather status reports, calendar updates and control a huge number of smart home devices, all via voice prompts. In this regard, since Alexa is cloud based, the Orbi Voice works as well as any of the official Amazon Echo devices.

The Orbi Voice has four microphones. They’re sufficiently sensitive, and I had to raise my voice only occasionally to get Alexa to hear. Since there’s a fairly powerful speaker inside, Alexa’s replies are easy to hear. 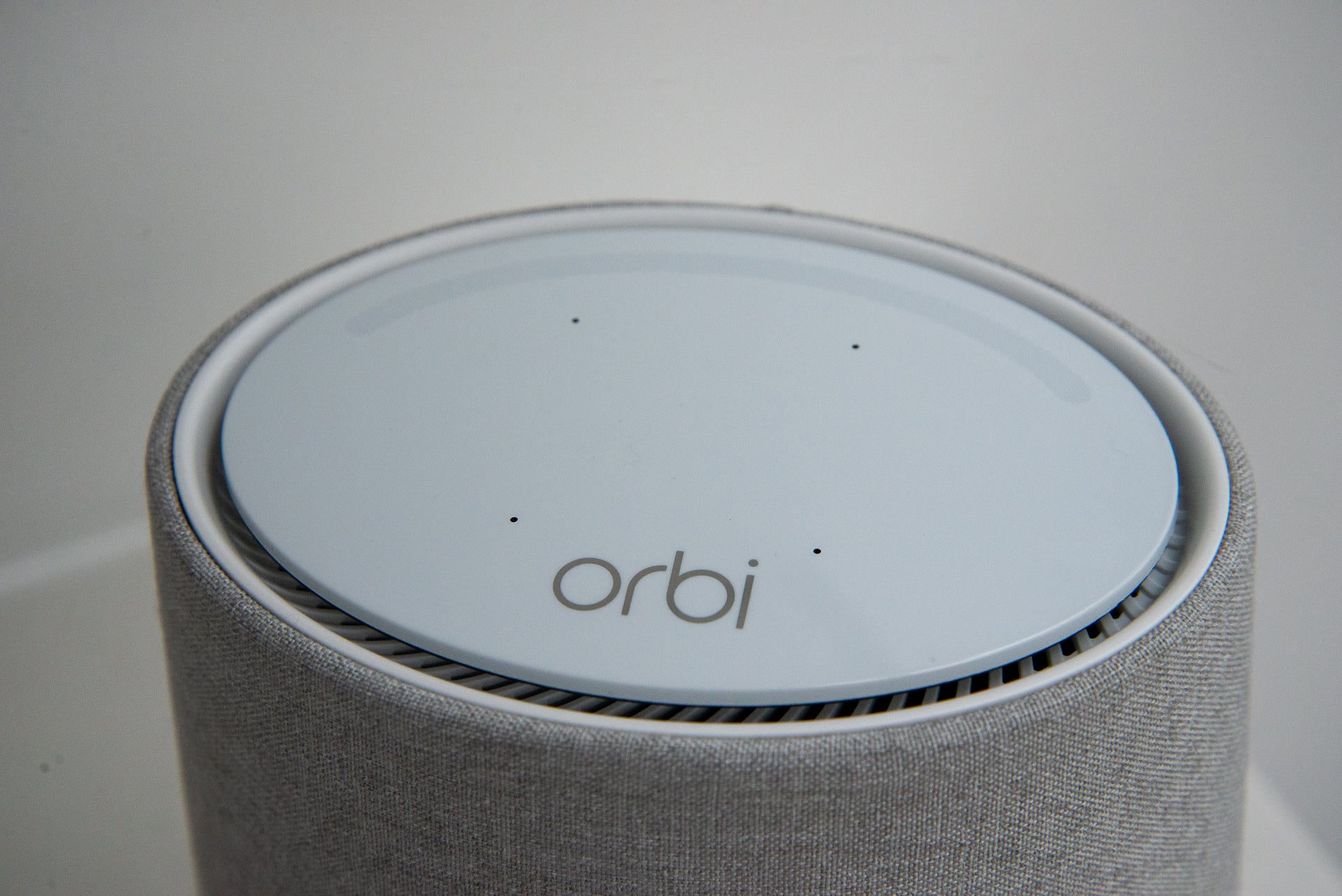 Where the Orbi Voice misses out is with some of the subtleties and tweaks afforded to the official Echo devices. For example, you can’t place the Orbi Voice into an Alexa Group with your smart devices, which is a real shame. When you’ve got an Echo in a smart home group, you can say “Turn on the lights”, for example, and Alexa knows which lights you’re talking about. With Orbi Voice, you have to say which lights you want to turn on.

More annoyingly, if you’ve got a Sonos system, when you talk to the Orbi Voice, the sound is ducked across the entire system, not just the Sonos player in the same room.

You also miss out on Alexa voice-calling and drop-in. It’s slightly frustrating that Amazon doesn’t make third-party support better. Google does a far better job, with all Google Assistant devices supporting the same range of features regardless of manufacturer. What the Orbi Voice can’t do isn’t a deal-breaker, more of a frustration, particularly if you’ve got other Echo devices set up in groups and to make calls.

The entire Orbi system can be controlled by Alexa, although you still need to have the Orbi Skill running. Once connected, you can toggle your guest network on or off, or get Alexa to send you your current wireless network name and password.

Outside of that, Orbi Voice provides the same range of features as any other Orbi pack, including the excellent Disney Circle parental controls (free and paid-for tiers available). I’ve covered this in more detail in my Netgear Orbi RBK20 review.

The Orbi Voice is a tri-band AC2200 802.11ac wireless device. It has a single 867Mbps 5GHz channel, reserved for the mesh part of the system. If you want to place the Orbi Voice further away from another satellite, you can use one of the Ethernet ports for the backhaul instead – say, if you want to kit out an outbuilding with Wi-Fi.

That leaves an 867Mbps 5GHz and 400Mbps 2.4GHz network for wireless devices. As with other Orbi satellites, the Orbi Voice supports MU-MIMO and beamforming. Once connected to your network, the Orbi Voice shares your original network’s name and password.

Effectively, the Orbi Voice is as good a mesh satellite as other Wi-Fi-only Orbi devices.

As well as being a great Wi-Fi extender, the Orbi Voice is also a high-quality speaker. I’d say that audio quality is on a par with the Amazon Echo Plus (2nd Gen). As with Echo devices, you can choose to play music using your voice, or you can use Spotify directly from your phone and choose your Orbi Voice as the playback device.

There’s plenty of volume from this smart speaker, and it will easily fill a good-sized room. At maximum volume, there’s a bit of distortion, but pull back slightly and the Orbi Voice sounds much better. There’s plenty of bass, and the speaker is poised and easy to listen to. There’s a slight muddling of audio in the mid-range, but nothing to really complain about.

If you want to change the sound, you can use the app and integrated equaliser. There are some presets (Rock, Classical, Jazz, R&B), although you can use the Custom option to get the Orbi Voice set up the way you want. 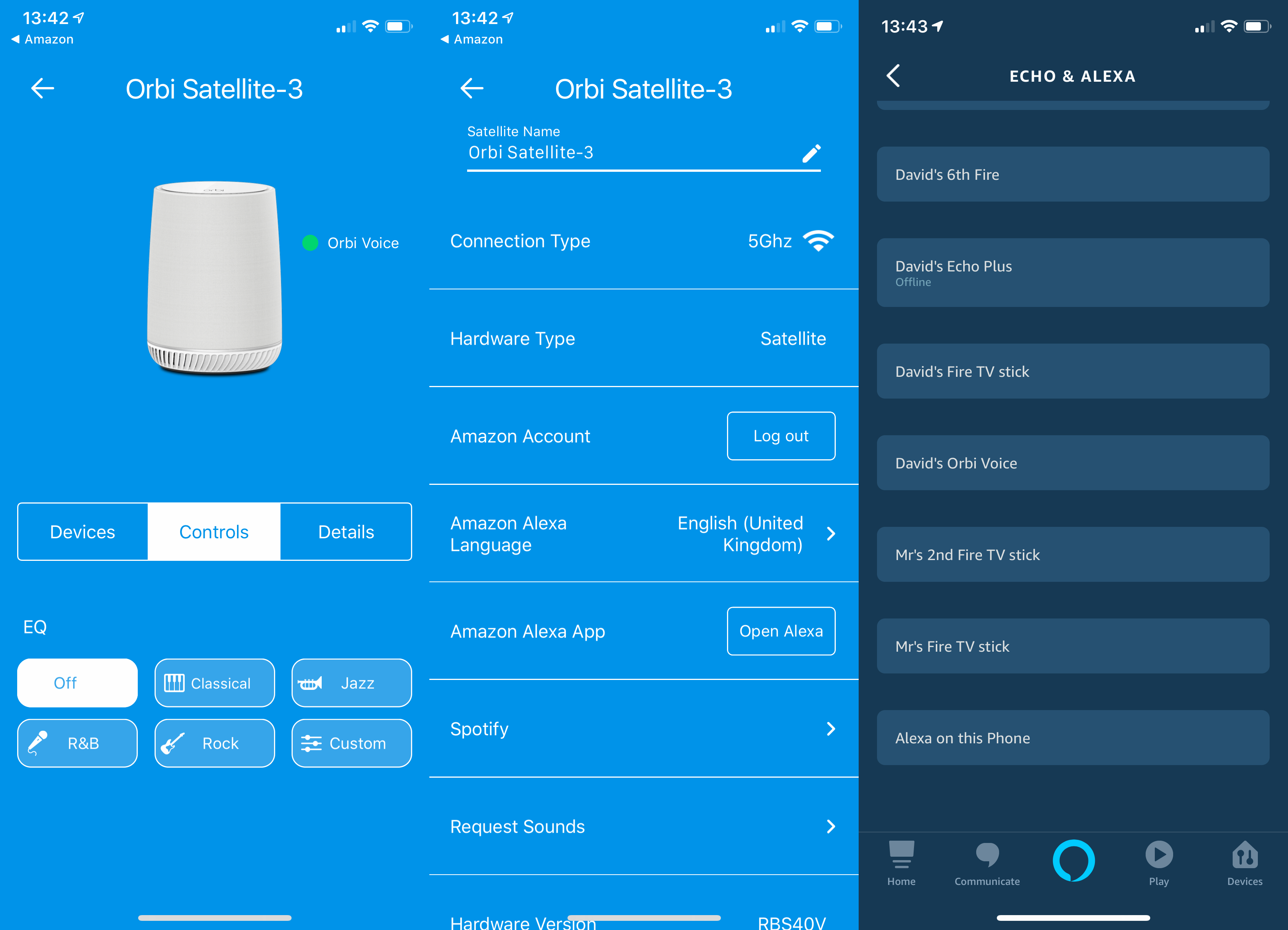 The closest satellite to the Orbi Voice is the RBS40, which sells for £125. Add in an Echo Plus (£139.99), and you’d have to spend closer to £265 to get everything you get with the Orbi Voice. Although the Orbi Voice is £15 more expensive (for the satellite only), it works out as good value, particularly as you have one box rather than two.

I certainly can’t knock the Orbi’s sound quality or Wi-Fi performance, but it isn’t perfect due to the way that Amazon treats third-party devices, locking them out from working with groups and barring calling on them. The effect is that the Orbi Voice isn’t quite as practical or as neat as using an Amazon device, and that’s frustrating. I’m hoping the situation will improve in the future.

For now, if you can live with the slight limitations, the Orbi Voice is a great way of boosting Wi-Fi and adding in a smart speaker. When Amazon sorts out third-party integration, the product could be even better.