It's a little more expensive than the other Orbi parts, but the Netgear Orbi Outdoor (RBS50Y) ensures a powerful and strong signal outside, which is ideal for security cameras and using the internet in the garden.

What is the Netgear Orbi Outdoor (RBS50Y)?

As soon as the sun starts shining, we tend to move out to the garden where we run into a common problem: a lack of Wi-Fi signal. The Netgear Orbi Outdoor (RBS50Y) is here to solve that. It’s a dedicated outdoor wireless extender that can either join an existing Orbi network or work as an independent wireless extender connecting to any wireless network.

This outdoor satellite shows the power of the Orbi system, which has recently expanded to include the Netgear Orbi Voice Alexa speaker. Excellent performance and flexible mounting could make this product a winner – although it is a touch expensive.

With the mounting kit, you can either attach the Netgear Orbi Outdoor (RBS50Y) to a wall or mount it on a stand, so that you can place the satellite on the floor or a table. It’s easy enough to do either, taking just a few minutes to screw the system together.

Once done, you can plug in the weather-proof power cable. At just over 2 metres long, it will be fine for most installations, but annoying if your power socket is a bit further away. I’d have preferred a slightly longer cable for flexibility. Turn the Netgear Orbi Outdoor (RBS50Y) around and you’ll notice that there are no ports on the back. This is because the satellite is weather-proof, so adding the likes of Ethernet ports would allow water to get inside.

There’s a power switch on the back to turn the router on and off, and a sync button to get the RBS50Y connected to your Orbi system (you need to put the satellite into Extender mode to hook it up to another wireless network). 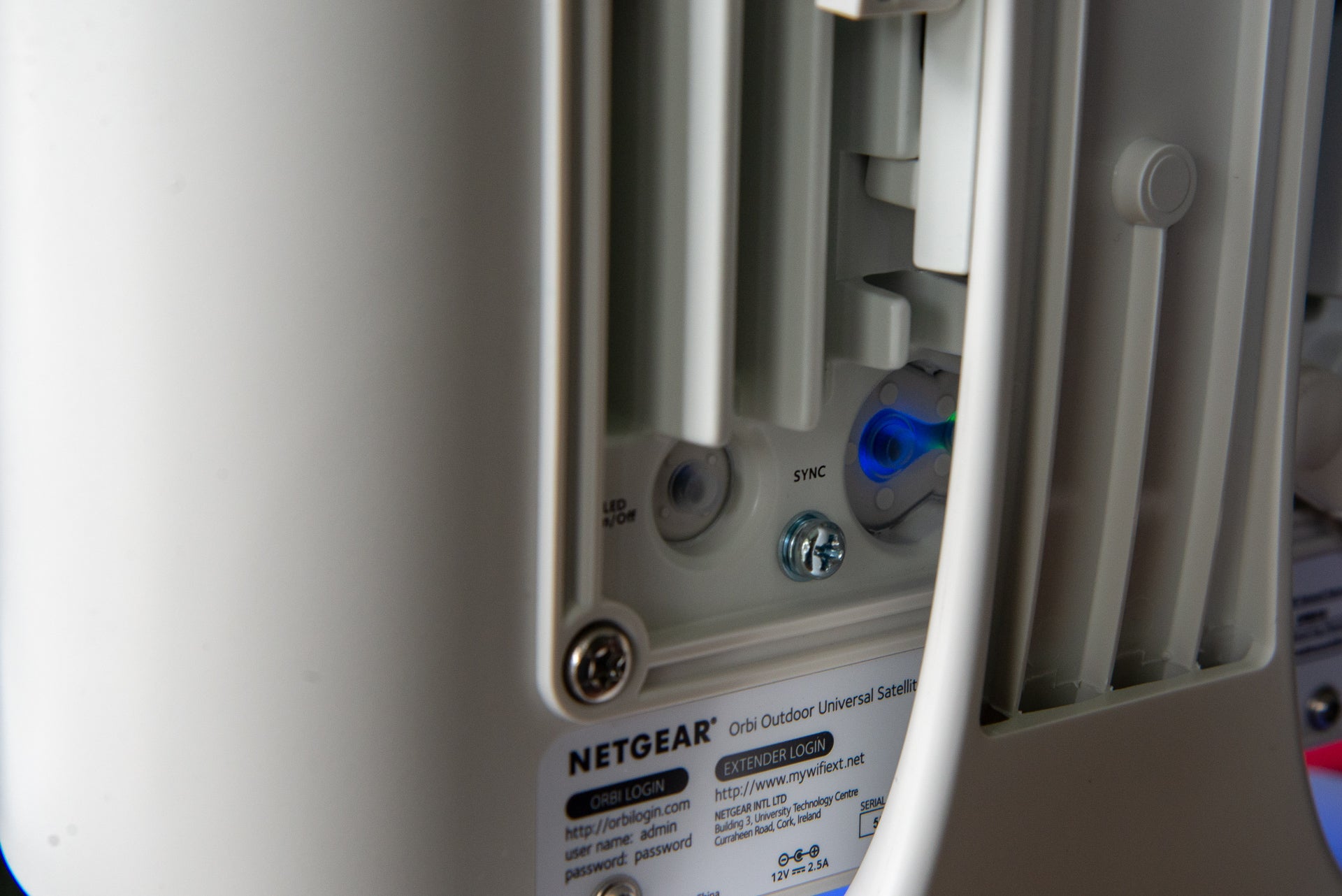 Using the RBS50Y with an Orbi system makes far more sense. In this mode, you can get the advanced features, such as Disney Circle parental controls (see my Netgear Orbi RBK20 review for more information).

More recently there’s Netgear Armor, which is a security system powered by Bitdefender that runs both on the main router and, via download, on your Mac and Windows computers, plus iOS and Android smartphones. By using an Orbi system, the Netgear Orbi Outdoor (RBS50Y) gets the same Wi-Fi name and password, and has seamless roaming, too, whereby your devices are pushed to connect to the satellite with the strongest signal.

Joining an existing Orbi network is simple. Following the instructions in the app to add a satellite, simply press the sync button on the back of the RBS50Y when prompted. I found that I had to update the firmware on the Netgear Orbi Outdoor (RBS50Y) to get a stable connection, however.

There’s a dedicated button to turn off the status light, which can also double as outside lighting. Via the app, you can control the brightness level of the downlight, and even schedule when it comes on. It’s a nice touch and one that makes the Netgear Orbi Outdoor (RBS50Y) feel more like it’s part of your garden.

The only minor annoyance is that the scheduling options don’t work very well. For example, if you’d like to schedule the light to come on at 8pm and go off at 12am (midnight), you can’t as the app tells you that “the end time must be later than the start time”. This makes it impossible to have lights stay on past midnight: the latest shut off time is 11:30pm. There’s one option that isn’t in the manual: the Indoor mode switch. By default the Netgear Orbi Outdoor (RBS50Y) ships in Outdoor mode. Due to the UK law governing 5GHz networks, outdoor devices can’t use channels 36 to 64, and are limited to operating on channels 100 to 140.

Turning on the Indoor mode tells the RBS50Y that it’s inside and, therefore, can use the lower channels for network connections outside, which will give you better client performance. Strictly speaking, you should choose the Outdoor mode if you’re going to place the RBS50Y outside. The Netgear Orbi Outdoor (RBS50Y) has the high-end specs of the Orbi RBK50 router. This means it’s a tri-band device. For clients, you get a 400Mbps 2.4GHz network and an 866Mbps 5GHz network (assuming you’ve selected Indoor mode). These are presented under the same name, with the router using band-steering to push devices to the strongest signal.

There’s a third 1733Mbps 5GHz channel, which is used for the backhaul to connect to other Orbi devices and build the mesh network.

Testing with the RBS50Y placed at the edge of the patio, I moved to the bottom of the garden 10 metres away. I managed an upload speed of 459.29Mbps and a download speed of 303.67Mbps. On average, that’s 100Mbps faster than I’ve seen before: previously, I’ve had to put an Orbi satellite in the kitchen window to get a strong signal outside.

Network range was great. Free from having to punch through any walls, I manage to get a signal all around the back garden, and out into the road running down the side of the house.

Although it’s fairly expensive, the Netgear Orbi Outdoor (RBS50Y) solves a major problem, delivering super-fast Wi-Fi outside. If you need a strong signal for outside security cameras, or you just want better reception for your phone and laptop while you’re outside, then there are no other products that offer the ease and convenience of the RBS50Y.

That said, if you’ve got an existing Orbi system and can reposition one of the satellites so that they’re in a window near your garden, you may find that you’ve got enough signal strength for whatever you need to do outside, albeit at slightly slower speeds than you’ve currently got.

That all said, the Orbi Outdoor gives you the convenience to move outside where you previously had no signal or a poor one.