Building on the successful Orbi lineup, the Netgear Orbi 4G LTE is a replacement router that will work with your existing satellites. This model ads 4G LTE into the mix, giving you a cellular connection as a primary or backup connection, building extra reliability into your network. It's an easy router to configure, and it provides strong, stable Wi-Fi. Slightly faster client-facing Wi-Fi would be welcome, but if you're looking for a way to bulletproof your internet then this is a great upgrade.

The Orbi system was just about the first mesh system to market, and it has endured exceedingly well, remaining the best overall system. One of the great things about Orbi is that Netgear has continued to create a stream new products for the system, including a range of satellites, an outdoor extender and now, the Netgear Orbi 4G LTE router.

This router replaces your existing router, giving you the option of using a 4G connection as well as regular broadband. You get the same quality performance of other Orbi systems, and the same brilliant app. The only potential minor disappointment is that this router is only compatible with the older Wi-Fi 5 system, not the newer Orbi Wi-Fi 6 routers.

If you’ve seen one Orbi router, you’ve seen them all – and the Orbi 4G LTE is no different. Encased in Netgear’s familiar curved plastic body, the new router is a fairly good-looking unit as far as mesh systems go. In the box, you’ll find just the router, since this is really made as an upgrade for existing Orbi owners.

Around the back, the setup is different to most Orbi routers. Here, you get just two Gigabit Ethernet ports. If you use traditional broadband, then only one is available for external devices, so you’ll definitely want to invest in an external switch. If you use 4G only, then you can use both Ethernet ports for connecting to the internet. 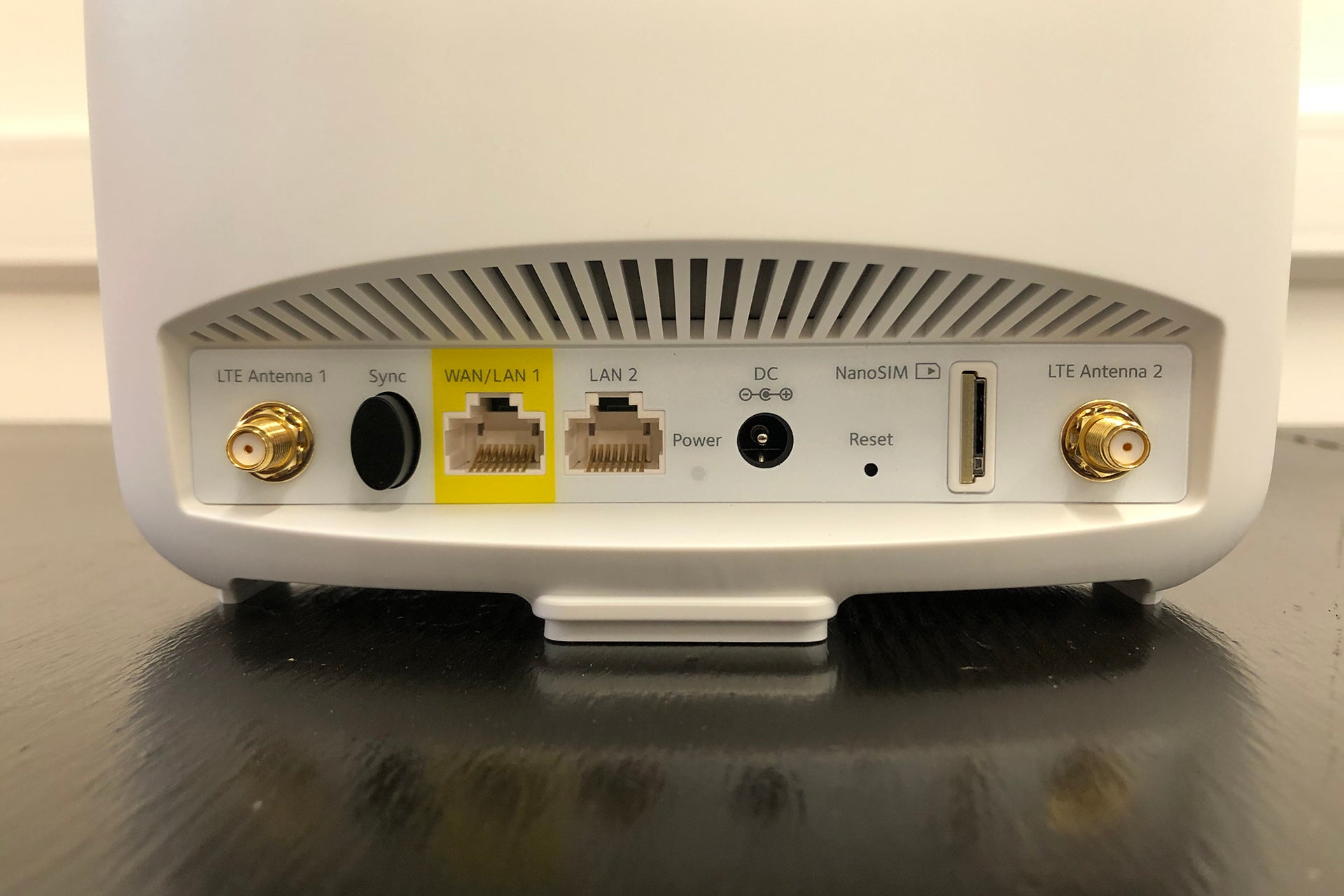 There’s a nano-SIM card slot, too, and the Orbi is compatible will all 4G/LTE networks in the UK, with a maximum throughput of 1.2Gbps. An LTE antenna is built in, although you can connect up to two external antennas if you’re struggling to get a good connection. 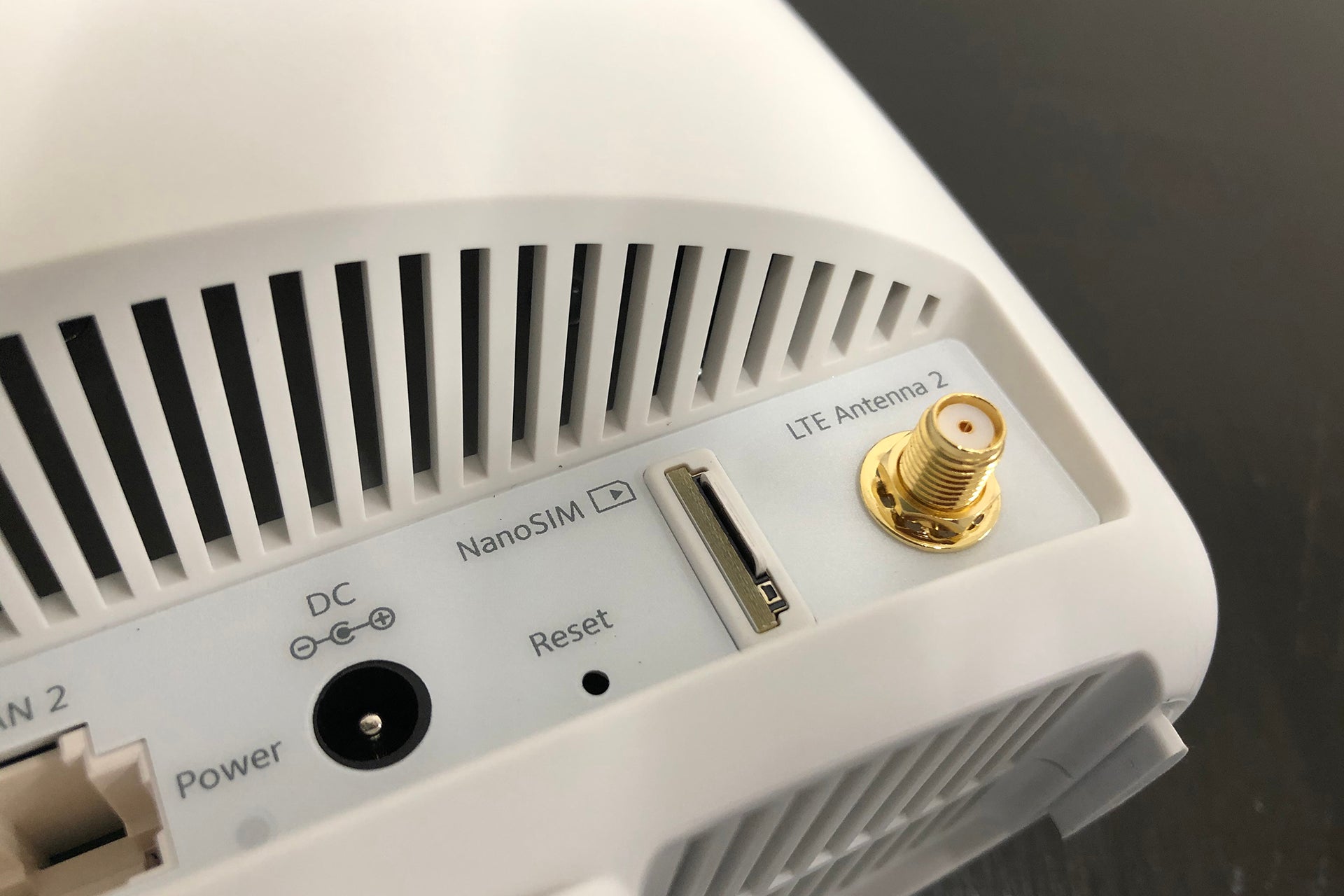 As is the case with other Orbi devices, configuration is handled through the Orbi app, where a simple configuration wizard will help you to get this router working.

If you’re upgrading an older Orbi system, then it makes sense to give this new router the same network name and password. You’ll then need to reconnect old satellites to the new router one at a time, since currently there’s no migration tool.

Once done, you can control most things through the Orbi app, which even provides remote access to the router, so you can reboot it from wherever you are in the world. The difference with this model is that you can set up and manage two internet connections. The 4G/LTE connection will be picked up automatically if you have a SIM installed, but you may need to enter information to have the router connect to regular broadband.

The usual way of running this system would be to have the regular broadband connection as the primary connection, with 4G acting as an instant backup. That’s a brilliant solution to working at home; if you’re experiencing any internet issues with your main connection then you could move over to 4G and continue working.

It also means that you have internet backup for all of your IoT devices, such as your smart alarm or heating system. In short, if things go wrong with your internet connection, then you can still access all of your internet devices.

Just beware of the speed of 4G, as you may have to compensate for some devices. For example, security cameras can use a lot of bandwidth, so you may want to disable them while running on 4G.

Of course, if you move somewhere that doesn’t have a landline internet connection, the Orbi 4G LTE can be used as a standalone internet router, with the added advantage that Wi-Fi performance will be far better than you’d get with a standalone portable hotspot.

From the app, you can view who’s connected to your router, turn on the guest network, and change Wi-Fi details. There are even Google Assistant and Amazon Alexa skills to let you control your guest network with your voice or be sent the current Wi-Fi details. 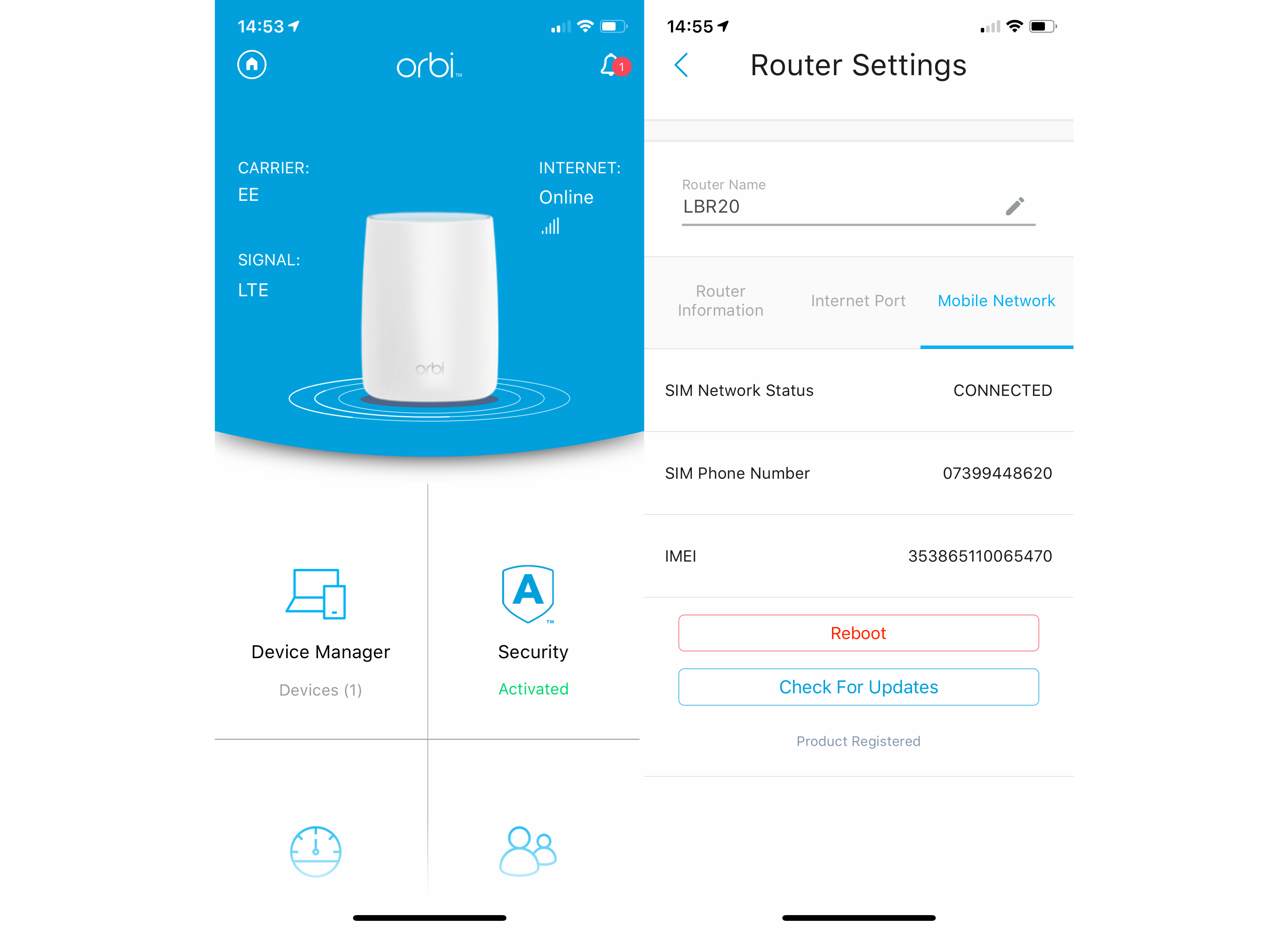 Netgear Armor is baked in, which provides security on and off the network via client software. It will scan and find problems with outdated equipment, too, suggesting firmware updates for old hardware. Armor is powered by Bitdefender and costs £59.99 a year once the free 30-day trial has expired.

Also included is Circle parental control, which lets you create profiles for members of your home, grouping together each person’s devices. You can then apply web-filtering rules to those devices, defining the types of websites and content that each person can view. With Circle, you can block internet access for each person individually. Basic control is available for free, but if you want to set bedtimes, time limits and more, you’ll need to fork out a monthly fee of £4.49.

More advance features are found in the Netgear web portal, which you can access from any computer’s web browser. From there you can access port forwarding, change wireless channels and turn on BT IGMP support, which lets BT TV’s streamed channels work.

As the LBR20 product name hints, the Orbi 4G LTE is based on the RBK20 system – the more entry-level Orbi – rather than the higher-end RBK50. Although you get the same front-facing 400Mbps 2.4GHz and 866Mbps 5GHz networks for clients, the dedicated backhaul Wi-Fi runs at 866Mbps, rather than the faster 1733Mbps connection of the higher-end system.

This can potentially limit speed between satellites, although you can bypass the wireless interconnection and use Gigabit Ethernet instead.

Testing in my home using RBK20 satellites, I saw speeds of 286Mbps at close range, 208Mbps on the first floor and 149.67Mbps on the second floor. These are fast and reliable speeds; but the larger RBK50 did better. You can mix and match satellites and, as already mentioned, use Ethernet to improve connection speeds. 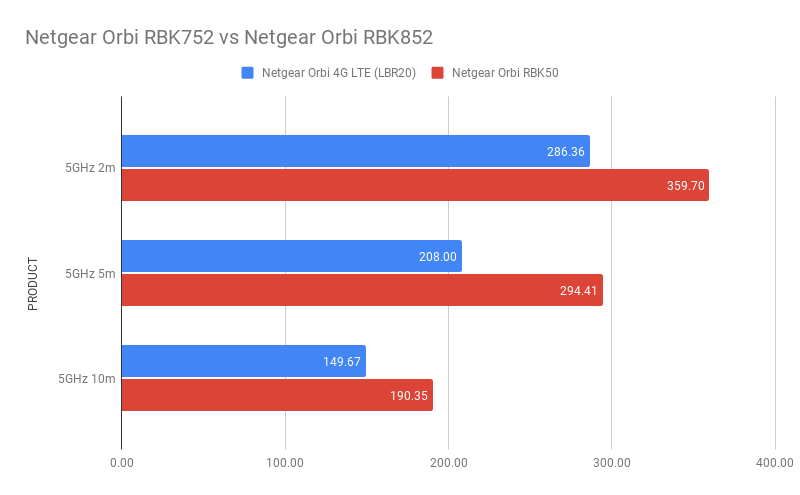 Internet connection speeds will really depend on where you live, and the network you’re on. Taking the router to a rural location, and placing it in the window, I saw download speeds of 12.4Mbps using EE; using my phone inside, I managed just 3Mbps.

Should you buy the Netgear Orbi 4G LTE (LBR20)?

How important is your broadband connection? If you really can’t live without it, then the Netgear Orbi 4G LTE (LBR20) is a great way to ensure that you always have a stable internet connection. And, since it works with just about the most popular mesh system on the planet, it can be a good upgrade for many. This is also a good system for anyone who doesn’t want to pay for (or who can’t get) landline broadband.

It’s slightly disappointing that you can’t get a similar router for the Wi-Fi 6 model, although the high price and general lack of support for Wi-Fi 6 at the moment means that the Wi-Fi 5 Orbi remains the better product for most people.

Nevertheless, if you need the safety net of 4G backup then the Netgear Orbi 4G LTE (LBR20) router is a sleek way of achieving it.