What is the Netgear Nighthawk XR500 Pro?

But that’s not the point. The Netgear Nighthawk XR500 Pro offers performance up to the point of diminishing returns with current mainstream PC hardware, and draws you in with its software. Netgear has partnered with DumaOS to bring a “new” software platform to the router.

It offers control over the servers to which you’ll connect in multiplayer games, and provides a clear way to manage bandwidth across your household’s devices. While you can get other AC2600 routers for slightly less money, the software has a significant appeal, particularly among gamers. 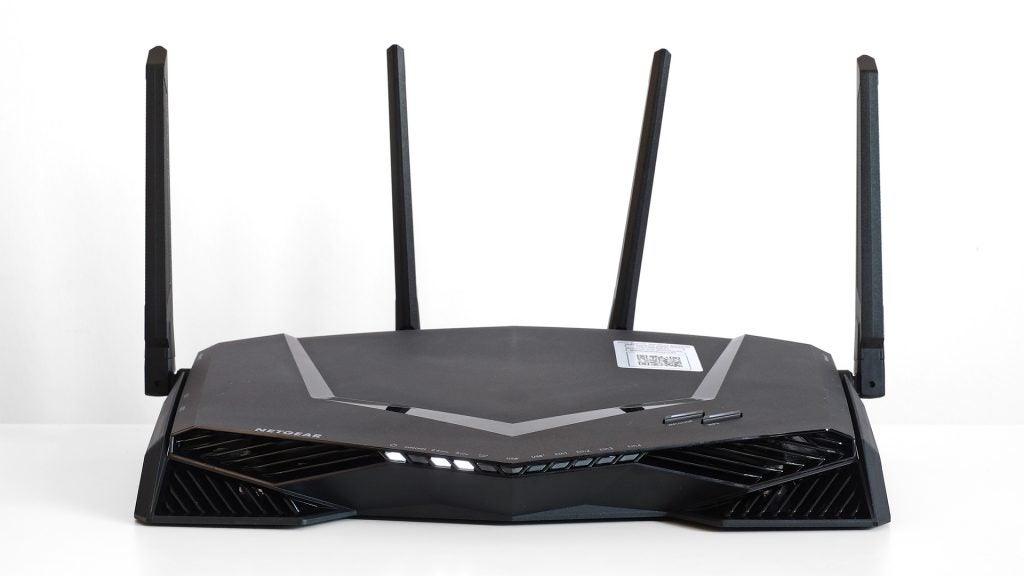 The Netgear Nighthawk XR500 Pro sports a look that will certainly attract it to gamers. Its front is aggressively contoured, and it has oversized grilles similar to those of an Alienware or Asus ROG laptop’s heat vents.

It doesn’t really need these since there’s no fan inside, and while some ventilation is useful, routers just don’t create that much heat.

The swooping, angular design won’t appeal to all, however. Trust your eyes on this one; Netgear has certainly recreated the look of gamer hardware. 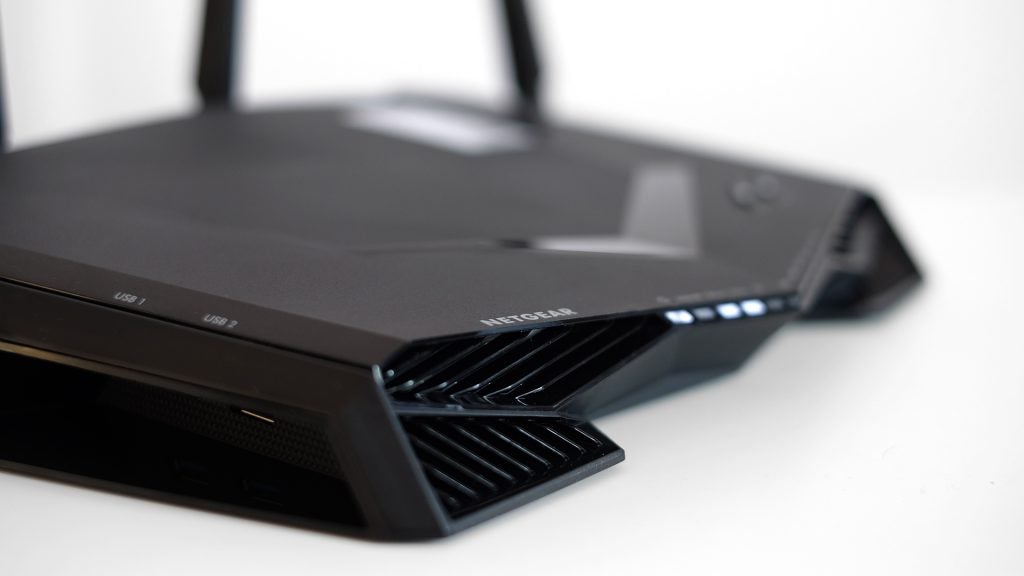 Its lines form a peak at the front, which is home to a set of LEDs. These relay standard information, such as whether the router has an internet connection, which Ethernet ports are active and so on. However, if you want to keep distracting lights to a minimum, there’s a switch on the back to turn them off.

Eye-catching lines aside, the Netgear Nighthawk XR500 Pro construction features nothing too odd. Its shell is plastic and heat vents around the back provide a clear path for air through the frame. 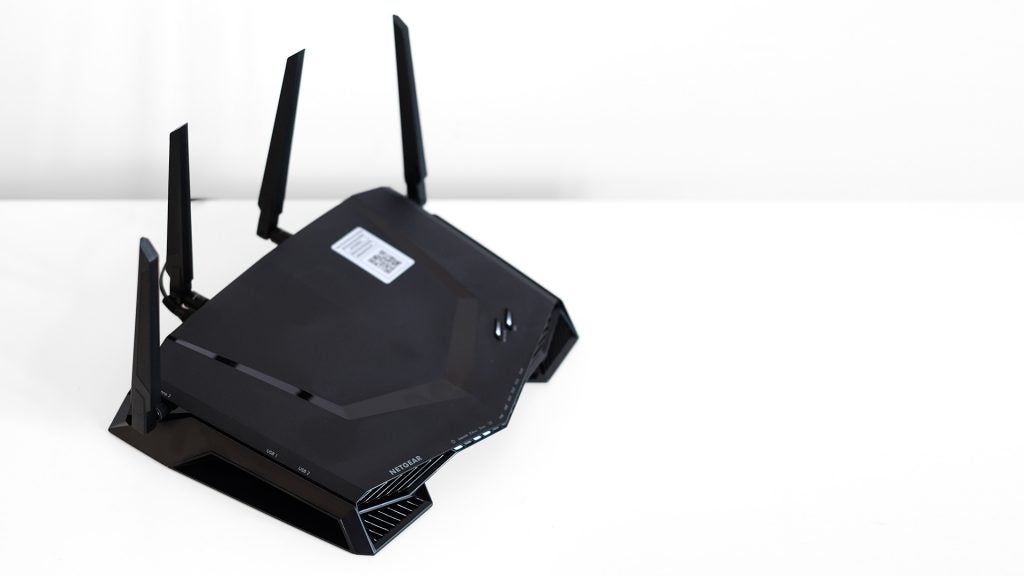 It has four powered antennas. Shop around and you can find simpler tri-band, six-antenna routers for less – the Asus RT-AC3200, for example. Of course, for many of us, the benefits of that upgrade aren’t necessarily stark. Home broadband just isn’t that fast in most areas, and neither are the Wi-Fi cards/chips of most desktops and laptops.

The Netgear Nighthawk XR500 Pro’s rear looks far more ordinary in comparison to its front. You get the standard four Gigabit Ethernet ports, and an additional one to plug in your modem. A couple more connectors would be useful, but four is pretty much the standard inclusion in almost every router at this level. 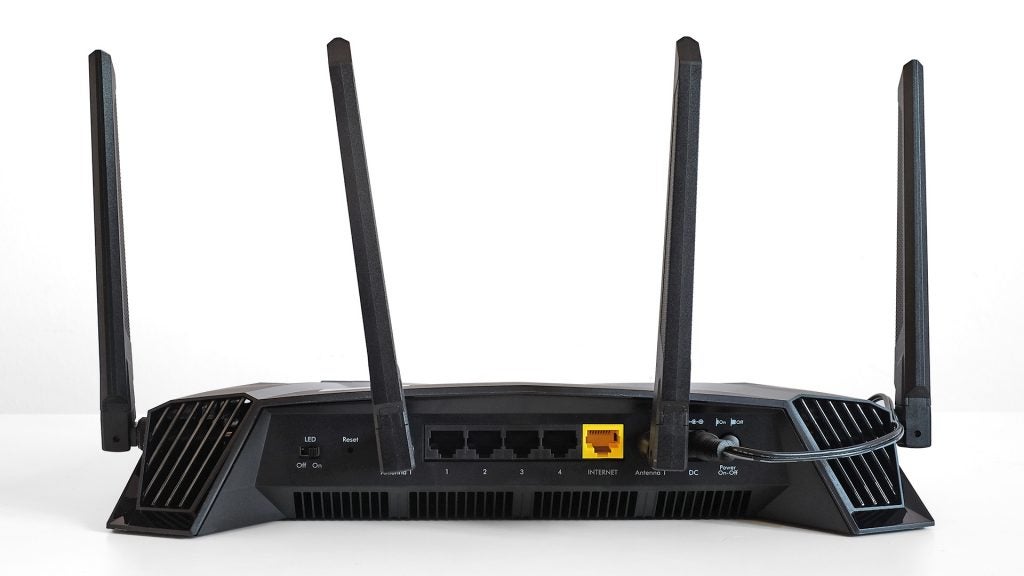 The XR500 Pro has two USB ports, hidden on its sides. Plug a hard drive or USB stick into either and the data will be shared over your home network. It’s an easy way to get networked storage that doesn’t rely on the use of a laptop.

All this is powered by the Netgear Nighthawk XR500 Pro’s dual-core 1.7GHz processor and 512MB of RAM.

I didn’t experience any issues setting up the Netgear Nighthawk XR500 Pro. Plug it in, connect to your computer and head to http://routerlogin.net. A quick wizard will test your internet speed and let you change the login details. It took only a few minutes.

After this, you’ll end up in DumaOS, the Netgear Nighthawk XR500 Pro’s main appeal.

This is an all-web-based utility that splits performance monitoring and additional features into a bunch of clear, simple panels. It won’t make router problems simple to solve for those with only basic networking knowledge, but it does make the Netgear Nighthawk XR500 Pro’s extras far more useful. The more intuitive these features are, the more likely you are to use them. 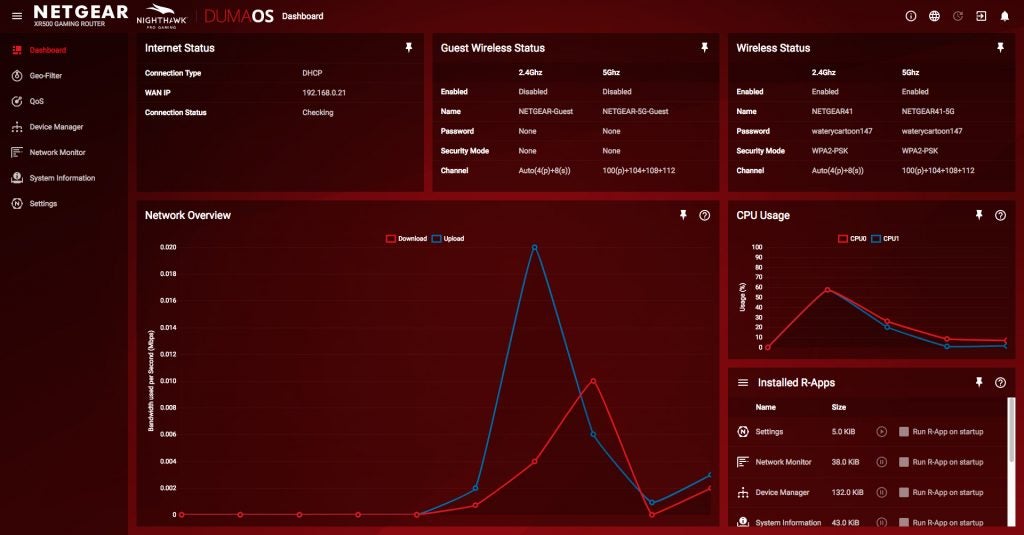 QoS and geo-filtering are the most important. You don’t have to be a gamer to appreciate quality of service. This ensures traffic is correctly prioritised, for less time spent looking at video-buffering screens and no (or less) lag in connected games.

In the QoS section, you’ll see a map of all the devices connected to your home network. A sort of pie chart details how much share of the bandwidth each gets. Just a quick mouse drag lets you give, say, your PS4 or gaming PC higher priority. 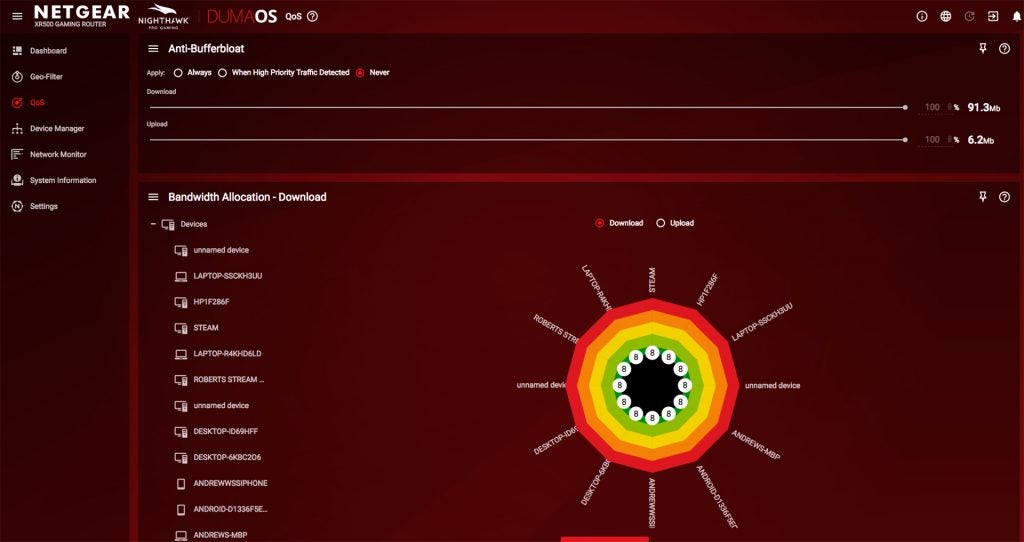 Particularly useful is the Anti-bufferbloat featurem, which limits a single device from hogging your entire connection when, most likely, buffering high bit-rate video.

The Netgear Nighthawk XR500 Pro bases its QoS on the scan of your internet connection on startup. It will distribute any extra bandwidth if your ISP was just having a bad day on setup, but it’s also possible to manually set the expected network bandwidth.

Geo-filtering is the more unusual part. You can set the areas the Netgear Nighthawk XR500 Pro will connect to when looking for a game server, in order to lower your ping and reduce the chance of lag.

As with QoS, DumaOS’s intuitive visualisation feature is the big hit. You can select an area on a world map, and choose a radius for “allowed” connections. 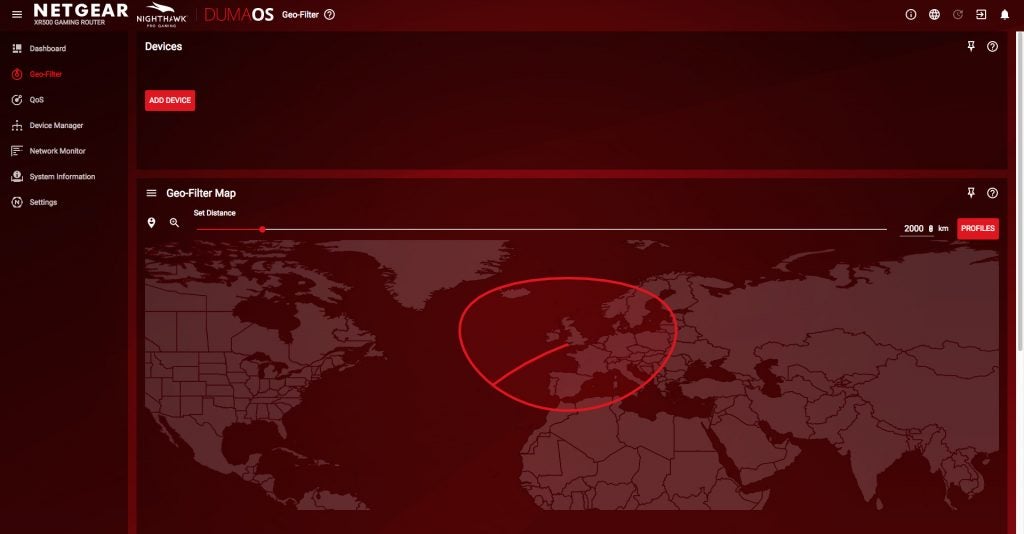 This feature could have been a nightmare to use, but DumaOS makes it seem simple. You’d better be into one of the more popular games, not one whose servers and player base have dribbled away to almost nothing, but it’s handy nevertheless.

When you decide which features and monitoring screens you find most useful, you can pin them to the DumaOS dashboard. This will mean that you won’t have to use the platform’s navigation menu, with links to your most-used panes appearing on the “home” screen. 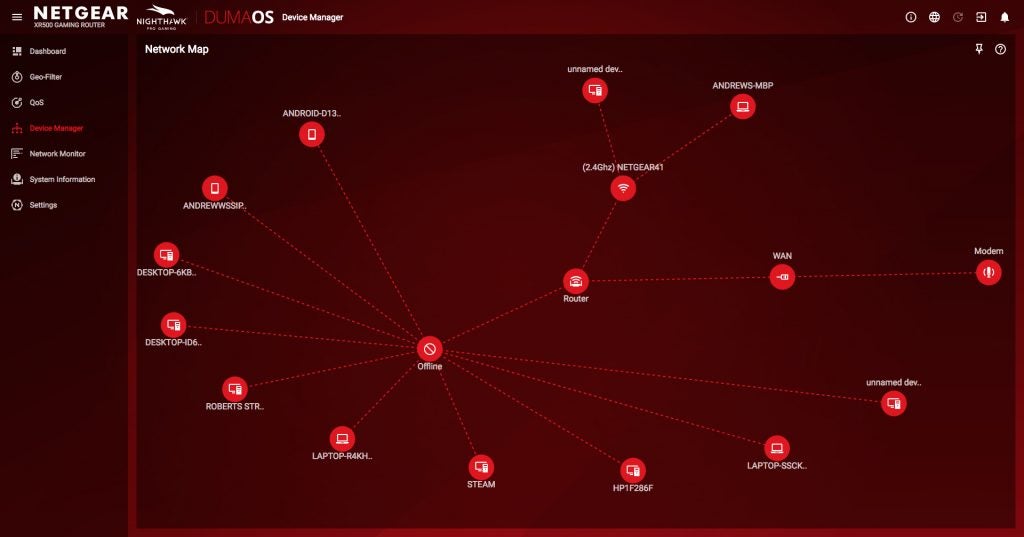 We’ll likely see several more Netgear routers with DumaOS in the future. However, this is the first router to use it since NetDuma’s own R1, originally announced in 2014. 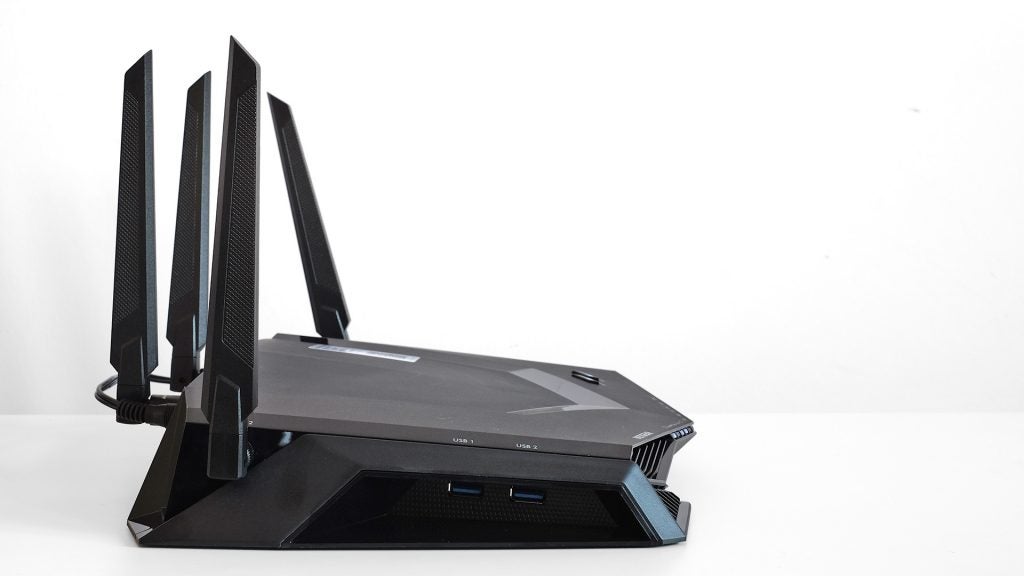 If you’re shopping for your first major router upgrade, acknowledging that real-world speeds won’t quite reach the specs of the 2.4GHz and 5GHz bands is essential.

To test the Netgear Nighthawk XR500 Pro’s performance, I used network bandwidth tester application iPerf. A desktop PC was wired into the router, then a number of other devices connected to it to test the local network speed; even Virgin Media’s fastest fibre optic broadband won’t max out this router.

Wired Ethernet throughput speeds, tested with an Alienware 15 R3, reached 924Mbps. This is close enough to maxing-out the speed of the Gigabit Ethernet port, which is good news. 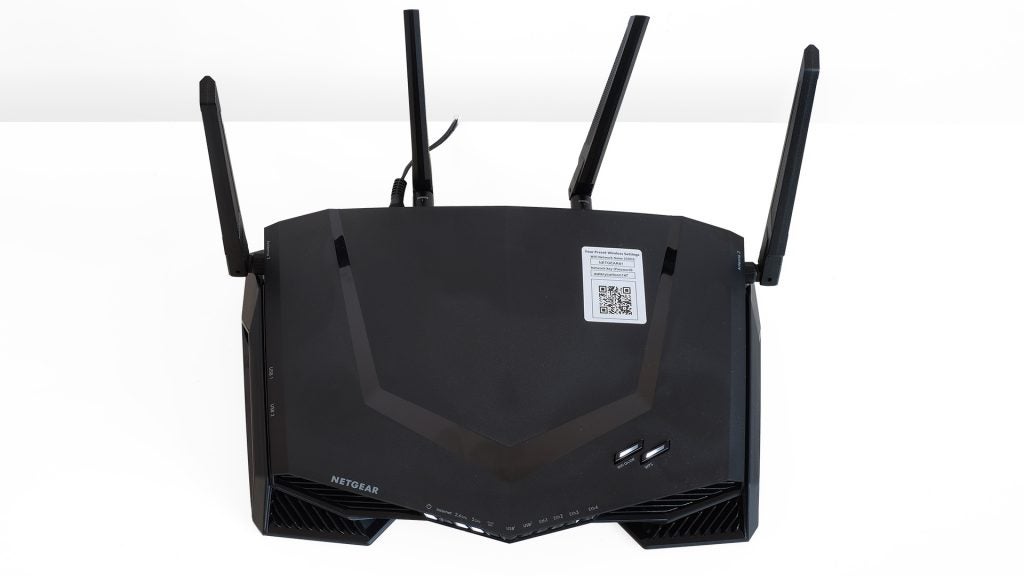 The Alienware R3 15 isn’t actually capable of reaching these speeds wirelessly. Its Killer Wireless-AC 1535 Wi-Fi chip has a maximum total throughput of “only” 876Mbps.

Strangely enough, short-distance results from the Lenovo Mix 510’s Intel chipset were even better. It topped out at 399Mbps at 1 metre, dropping to 377Mbps at 3 metres and 228Mbps at 10 metres.

At 1 metre the LG G7 reached 355Mbps, 355Mbps at 3 metres and 164Mbps at 10 metres. Its swifter drop-off is no great surprise when it likely has a smaller antenna array than the laptops tested. 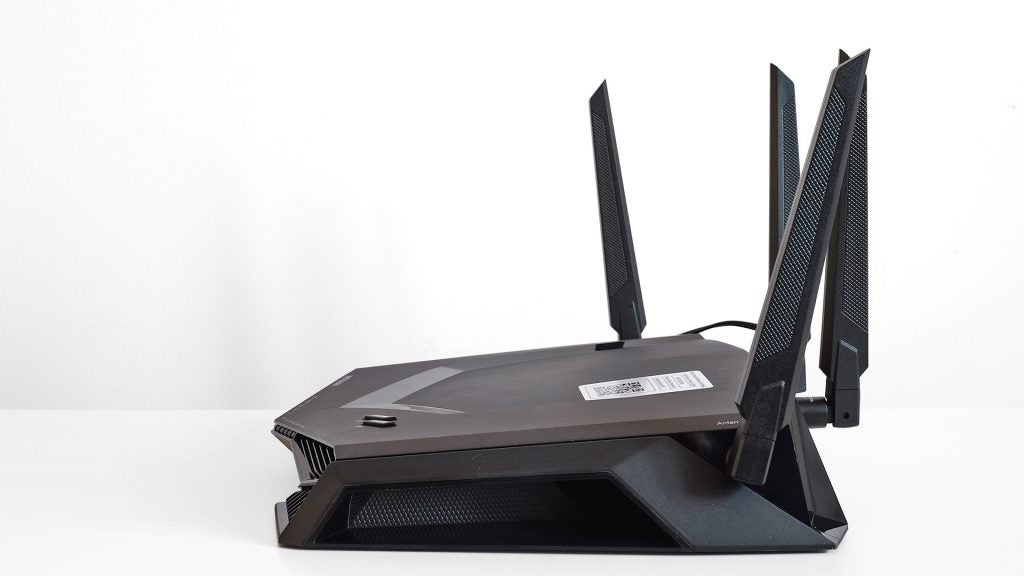 The Alienware managed 196Mbps at 1 metre and 95Mbps at 10 metres. Of course, if you buy this router you’ll likely use 5GHz most of the time.

The Netgear Nighthawk XR500 Pro isn’t the fastest router in the known universe, but it performs admirably for its spec level. Close and mid-range 2.4GHz performance is notably very good too. 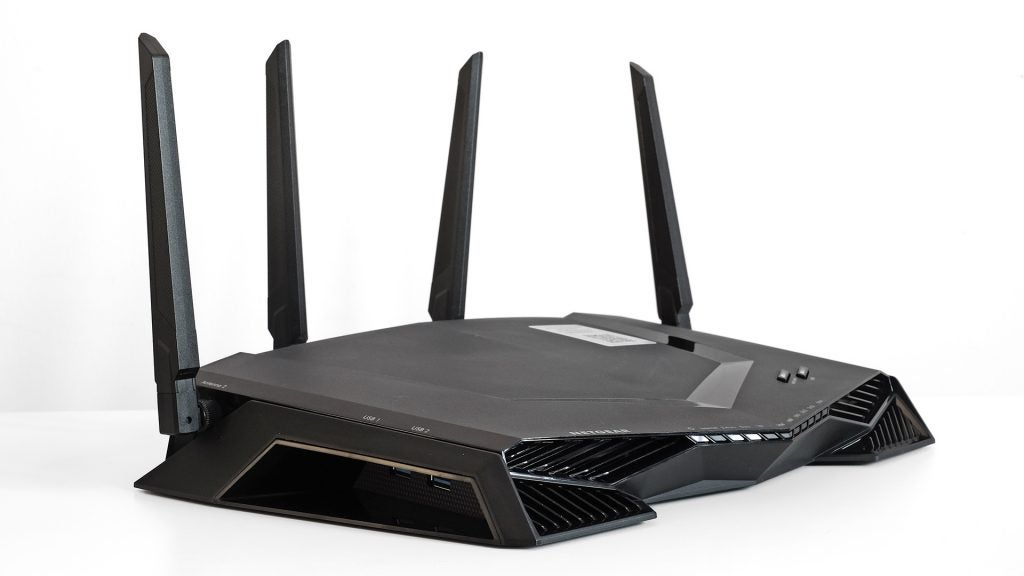 The main draw of the Netgear Nighthawk XR500 Pro is its DumaOS software. It makes advanced features such as custom QoS and geo-filtering appear simple. Implemented poorly, these useful extras would quickly be made useless. However, this isn’t the case here.

Those who own extremely fast wireless cards for their desktops and whose main concern is maximum performance  may want to consider a tri-band router. However, gamers after real-world performance and the management of a bandwidth-limited internet connection should take the benefits of DumaOS seriously.

Solid performance and great software make for a compelling package.