It isn't the fastest Wi-Fi 6 router in Netgear's lineup – there are faster models available for less – but the Netgear Nighthawk XR1000 is still quick. However, it's the DumaOS 3.0 operating system that really grabs attention; it offers fine control over the servers to which you can connect, ensuring you always achieve the lowest ping times. For those who need it, then, this is a great router.

Although this isn’t the fastest router in Netgear’s lineup, the XR1000 is fast and DumaOS offers plenty for the serious gamer.

You might have just read that Netgear’s routers aren’t simply rebadged models sporting fancy coloured finishes, but externally, the XR1000 is exactly that. It’s the same shape and size as the RAX50, only here there are red accents to show it’s the gaming router. And, in my opinion, those accents make the XR1000 look much better than the RAX50. 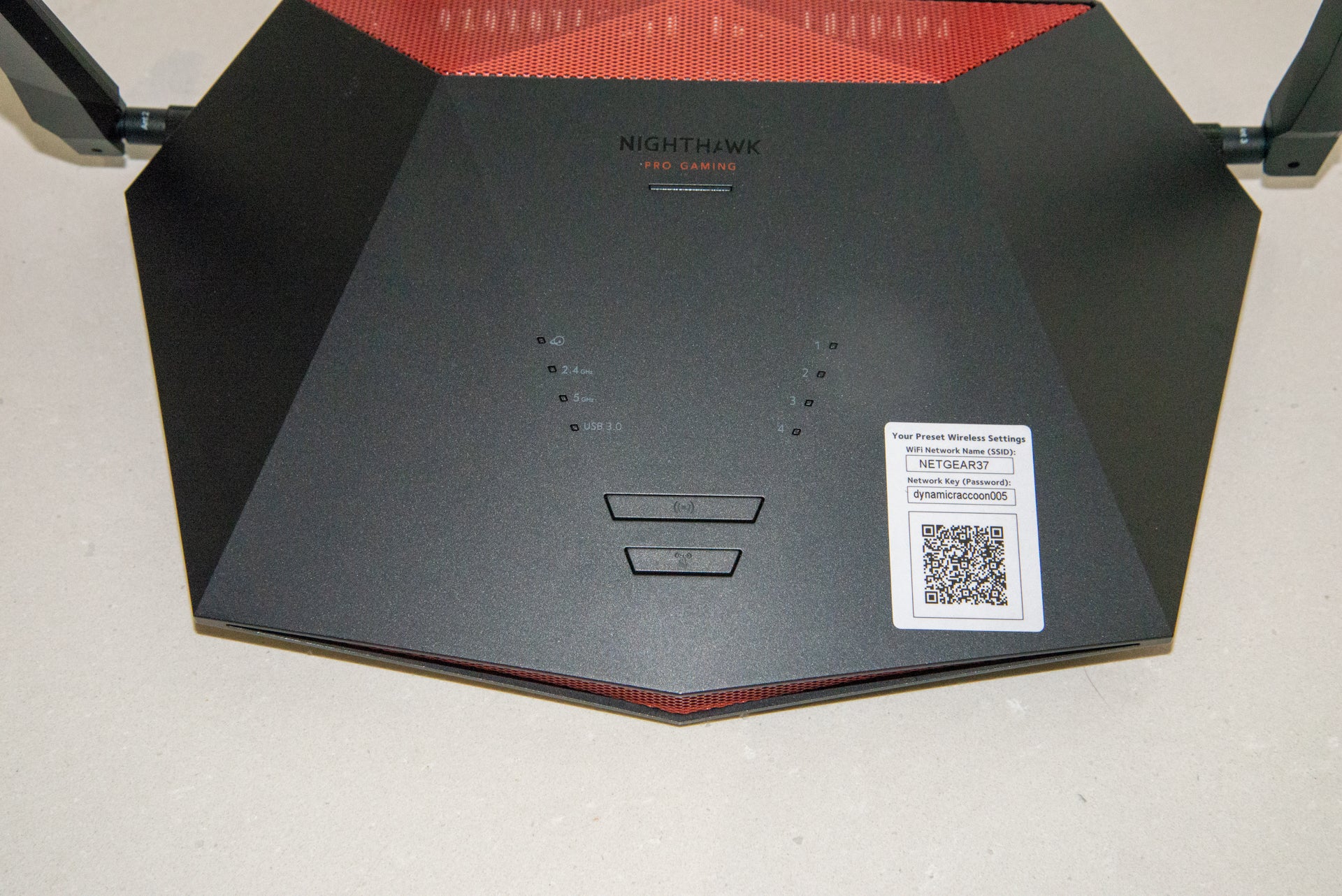 While Netgear’s other Wi-Fi 6 routers opt for a stealth-bomber look, fitting the antennas into fold-up wings, the XR1000 sports a more traditional design. Here, you have to fit the four antennas manually and stand them up. It’s a minor job leaving the XR1000 looking like it means business. 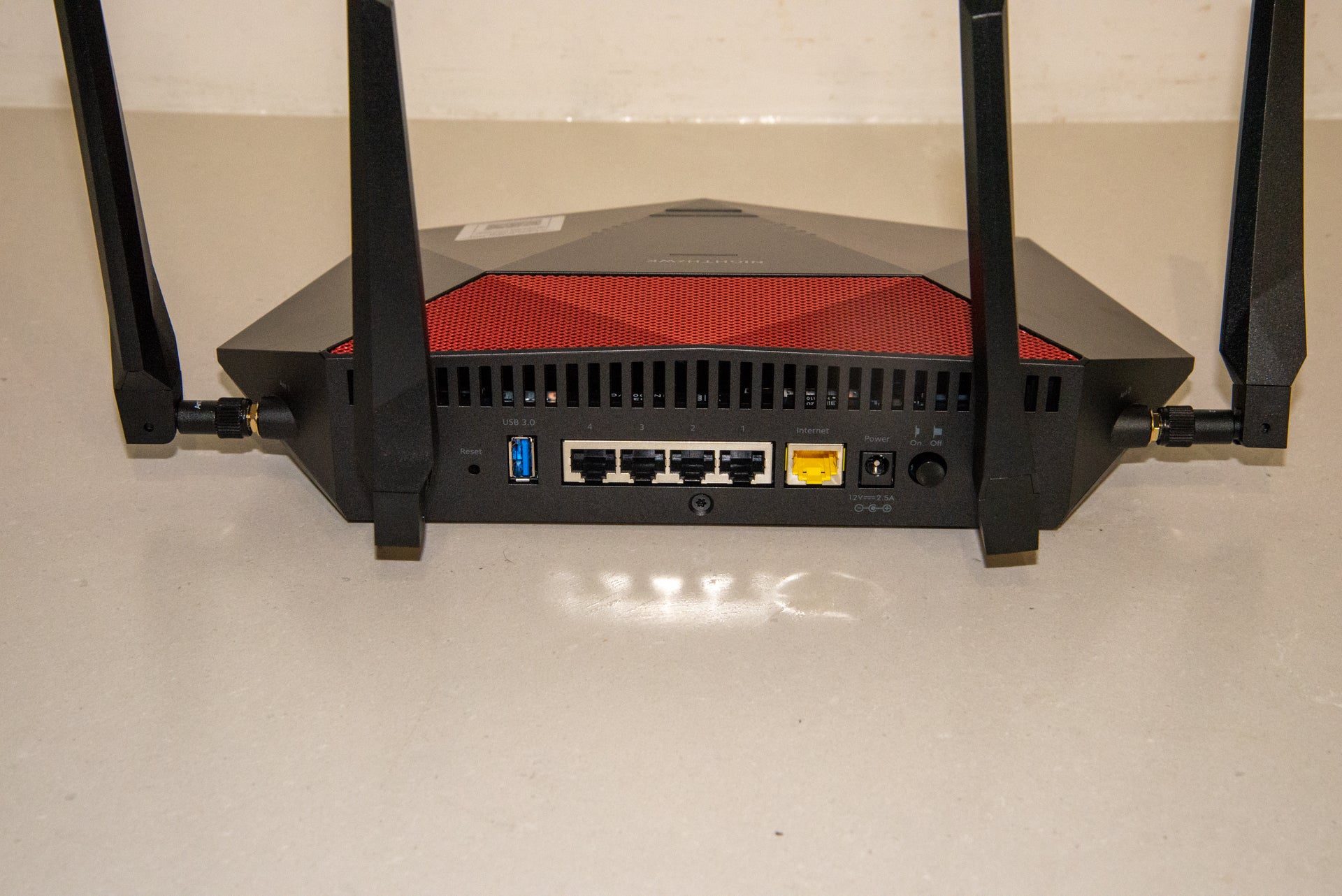 Also included is a USB 3 port for sharing files on the local network, should you need to. 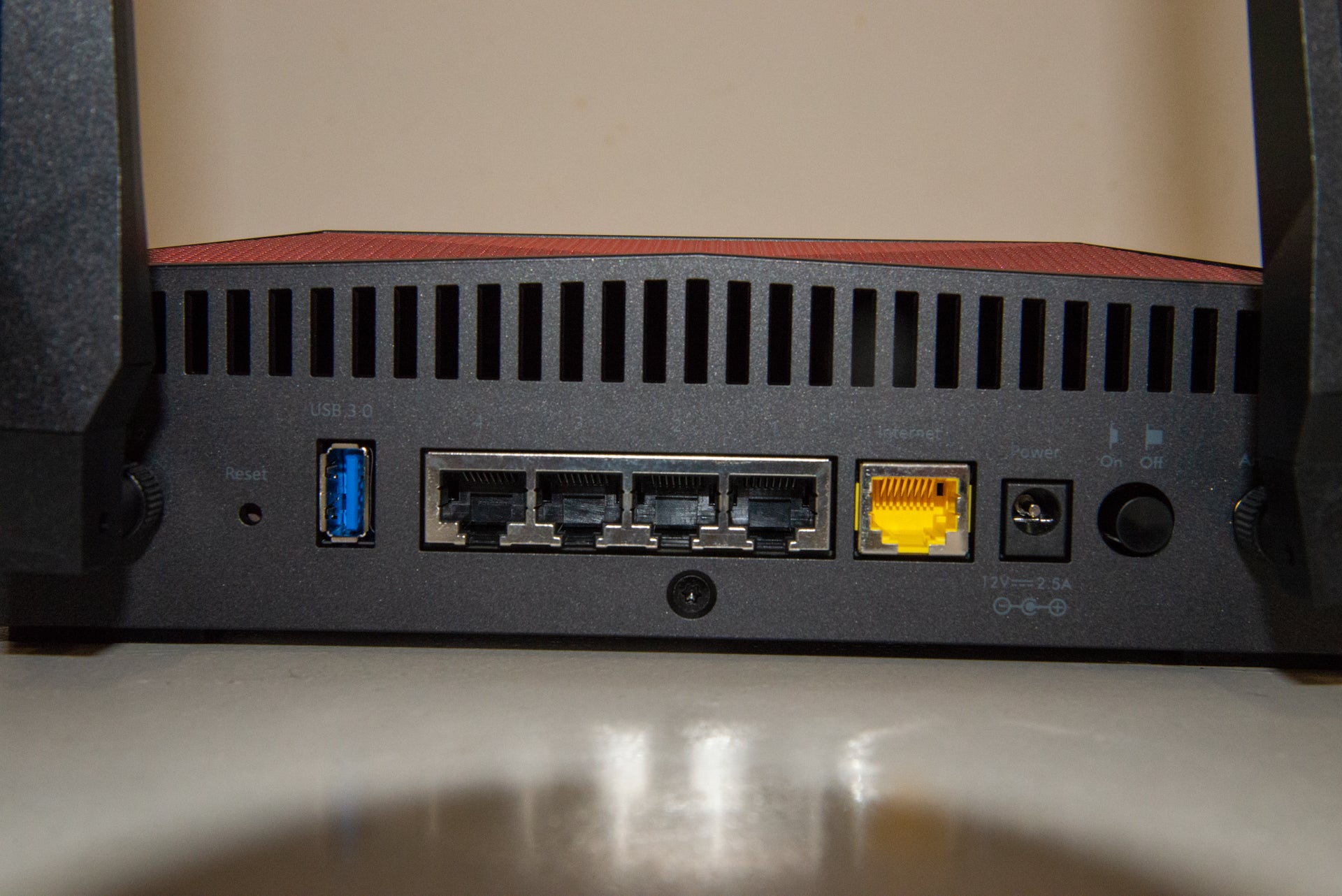 Setting up the XR1000 is via the Netgear Nighthawk app. This will get you connected to the router and take you through the internet and Wi-Fi setup. By default, you end up with two Wi-Fi networks – one for the 2.4GHz band and one for the 5GHz band – but you can turn on Smart Connect to have one network, with the router deciding which device connects to which band.

Through the Nighthawk app, you can do some very basic things. You can turn on the guest network, manage the Netgear Armor service (a network-wide security service that’s powered by Bitdefender, which costs £59.99 per year), and change your wireless name. You can also view connected devices and reboot the router, either when you’re on the same network or even remotely. 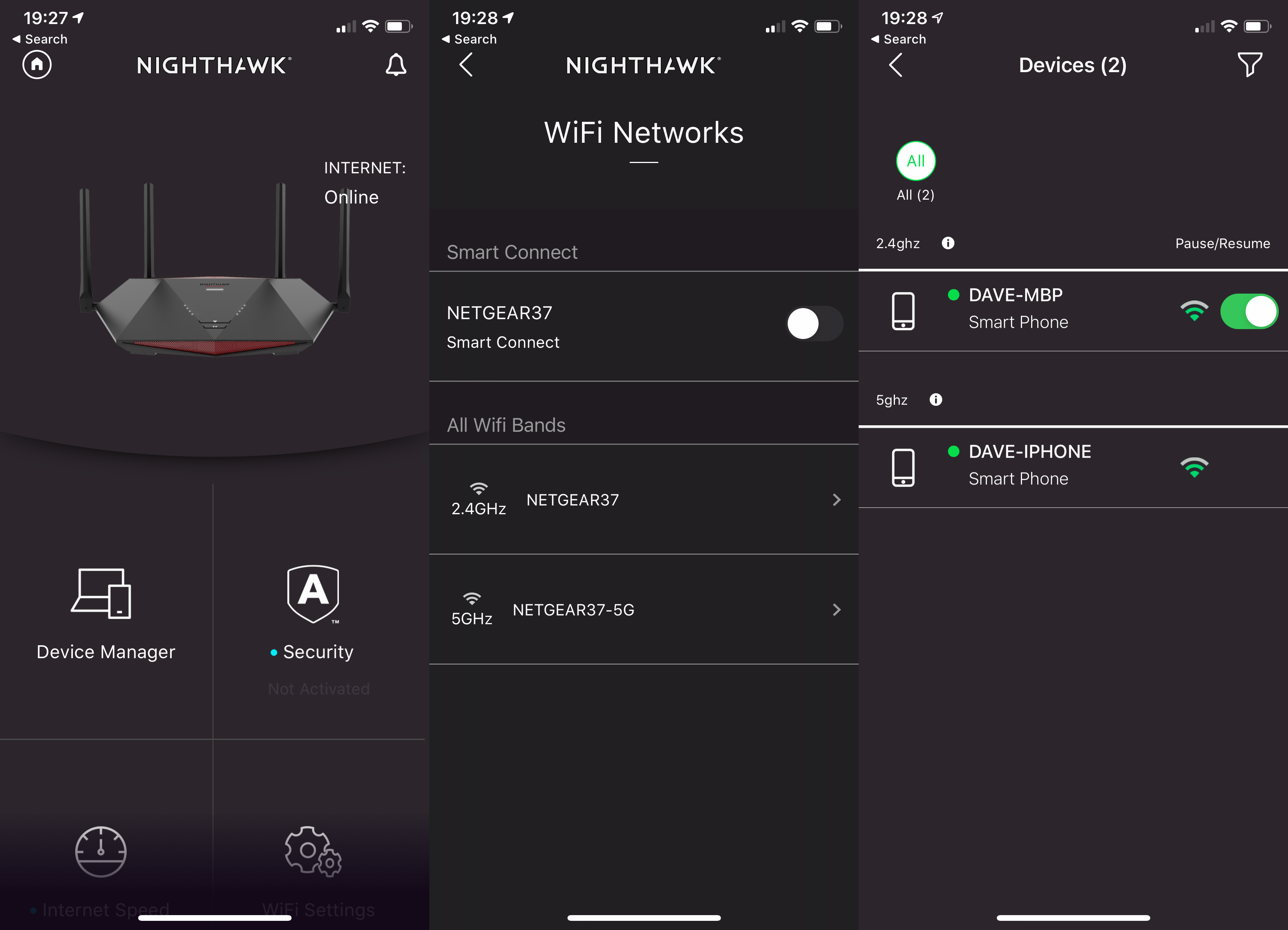 You’re only touching the surface of what the XR1000 can offer, however; you really need to dive into the web interface. Here, DumaOS 3.0 presents its full power – and it’s impressive. I first encountered DumaOS on the Netgear Nighthawk XR500, and this is now the latest version.

DumaOS is built around offering the best performance on a per-device and per-application basis, and it has some of the most sophisticated controls available. The router takes a speed test when you install it to get an idea of the bandwidth. Delve into the QoS settings, and you can drag and drop performance groups (Web, Media, Gaming, and so on), to allocate more or less bandwidth to each one. As you adjust one – say, making gaming a priority – the other groups adjust automatically. 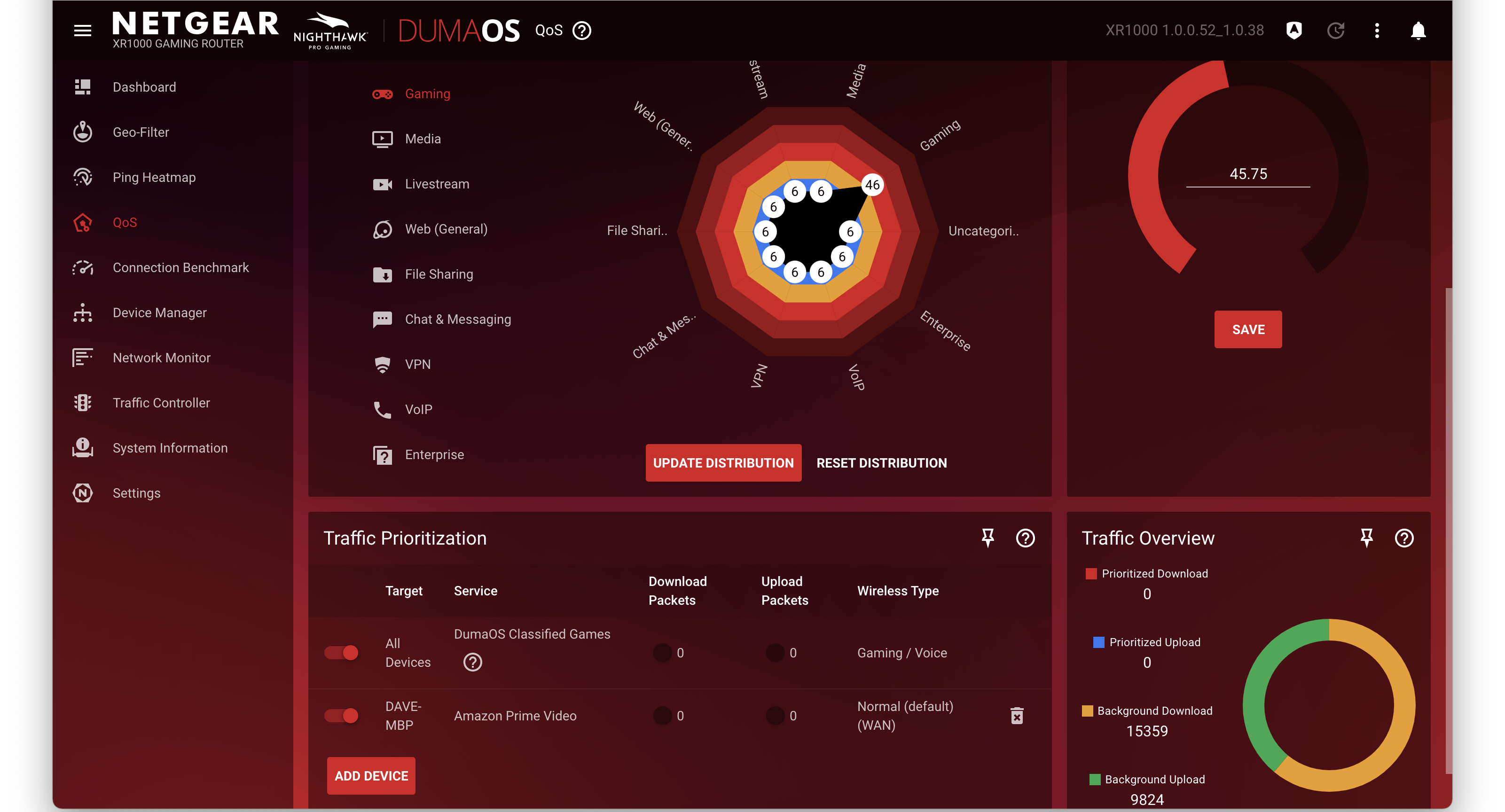 You can also add individual devices, giving them a specific priority, ensuring your main TV always has priority for streaming Netflix or Amazon Prime Video, for example. While QoS can often be a difficult thing to configure, DumaOS excels in making it easy to adjust quite complex rules.

As well as prioritising traffic, you can also set some complicated traffic rules. For example, you can set a schedule for when one device can play Call of Duty online, which is neat if you don’t want the kids going online all of the time. Perhaps what DumaOS is most known for is its Geo-Filter. This is the bit of tech that helps you find and connect to the servers with the lowest ping times, ensuring that when you do play online, you get the best response times.

You can select a game through the Ping Heatmap, then run a test to find out where in the world the fastest servers are. You can then use this to create a Geo-Filter, where the router only allows your games console or PC to connect to specific servers. Dive into the Geo-Filter proper, and you’ll discover new controls that let you select areas on the map where you want to connect, preventing your devices from joining games on slow servers. With the old version, you could only select a radius from a location, offering less granular control. The Geo-Filter is exceptionally powerful and is particularly useful for games consoles.

Otherwise, DumaOS provides the usual advanced controls, letting you configure your wireless network and internet connection in much the same way as on any Netgear router. Of course, although the XR1000 is backwards compatible with Wi-Fi 5 devices, you get the main benefits if you have Wi-Fi 6 devices. My guide to Wi-Fi 6 explains more.

Although there’s a fair amount of bandwidth here, the Netgear Nighthawk RAX80 doubles the number of 2.4GHz streams for a total bandwidth of 1200Mbps, although it maintains the same 5GHz speeds.

Testing the XR1000 with a Wi-Fi 6 laptop that contains a two-stream Wi-Fi 6 card, I put the router into Smart Connect mode to run my tests. I found that performance was very strong at close range, with throughputs of 715.57Mbps, but it dropped off on the first floor to 318.59Mbps, and did better again on the second floor at 355.15Mbps.

These speeds are very similar, although a touch slower, than those achieved with the Netgear RAX80 router. 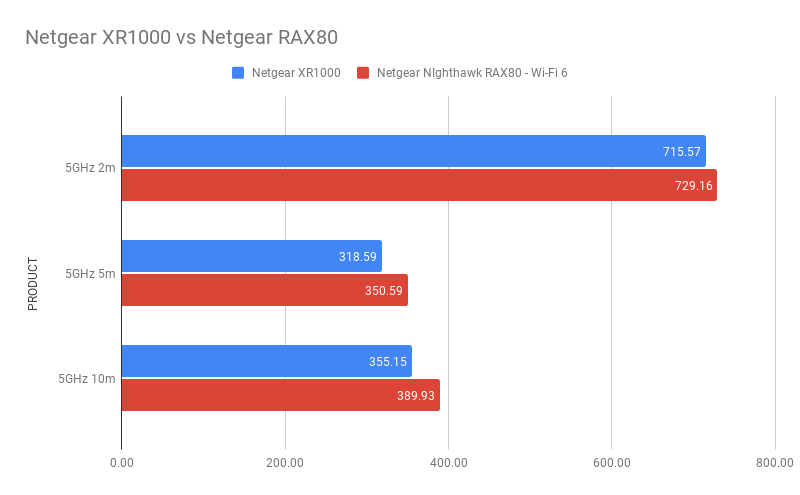 It isn’t Netgear’s fastest router, and the XR1000 actually offers less bandwidth than the cheaper RAX80. If you’re mostly just using your internet connection for web browsing or streaming video, then the older RAX80 makes more sense. However, if you’re properly into gaming, particularly on console where there’s less choice over servers, DumaOS comes into its own. If you need something different, then the guide to the best routers can help.