Like the slightly cheaper X4S, the Netgear Nighthawk X6S (EX800) uses twin 5GHz radios to provide both a fast connection to your client devices and a full-speed link back to your router. What’s more, the backhaul radio is rated at an exceptionally fast 1.7Gbits/sec, helping it to wring every bit of performance potential out of your router. Other standout features include a generous set of four Gigabit Ethernet sockets and a USB connector, allowing you to use the X6S to share a printer or a storage device. The X6S is expensive compared to other extenders, and you might find the freestanding design inconvenient. For anyone seeking the best in features and performance, however, this is the crème de la crème of Wi-Fi 5 repeaters.

The Netgear Nighthawk X6S (EX8000) is one of the most impressive Wi-Fi extenders we’ve seen. Its tri-band design combines a legacy 2.4GHz radio with a pair of 5GHz radios, eradicating the bottleneck that arises when a single radio is used for both client and router connections. The client-facing radio is rated at 867Mbits/sec, while the second one claims a massive 1.7Gbits/sec, so it should be able to handle as much data as your router can throw at it. It’s not short on range, either: Netgear advertises that the X6S can cover an area of up to 2,500 square feet, and will support up to 50 connected devices at once.

Admittedly, you might be put off by the price – or the fact that the X6S doesn’t support next-generation Wi-Fi 6. If you want that, you’ll need to move up to Netgear’s even pricier Nighthawk AX8 extender, or invest in a new router. As a way to add range and versatility to an existing 802.11ac network, however, the Nighthawk X6S has plenty going for it.

Most wireless extenders are small, self-contained units that plug directly into a wall socket. Not so the Nighthawk X6S: it’s bulkier than some routers, standing 227mm tall, and there’s no provision for attaching it securely to a shelf or wall.

The big casing does however allow space for plenty of features. At the front, a long row of eight LEDs shows the status of the X6S’ various features and connections, while at the rear you’ll find four Gigabit Ethernet sockets, enabling the extender to serve a whole home office. There’s a USB 2 socket too, allowing you to connect a printer, or hook up a USB hard disk and share files across your home network. 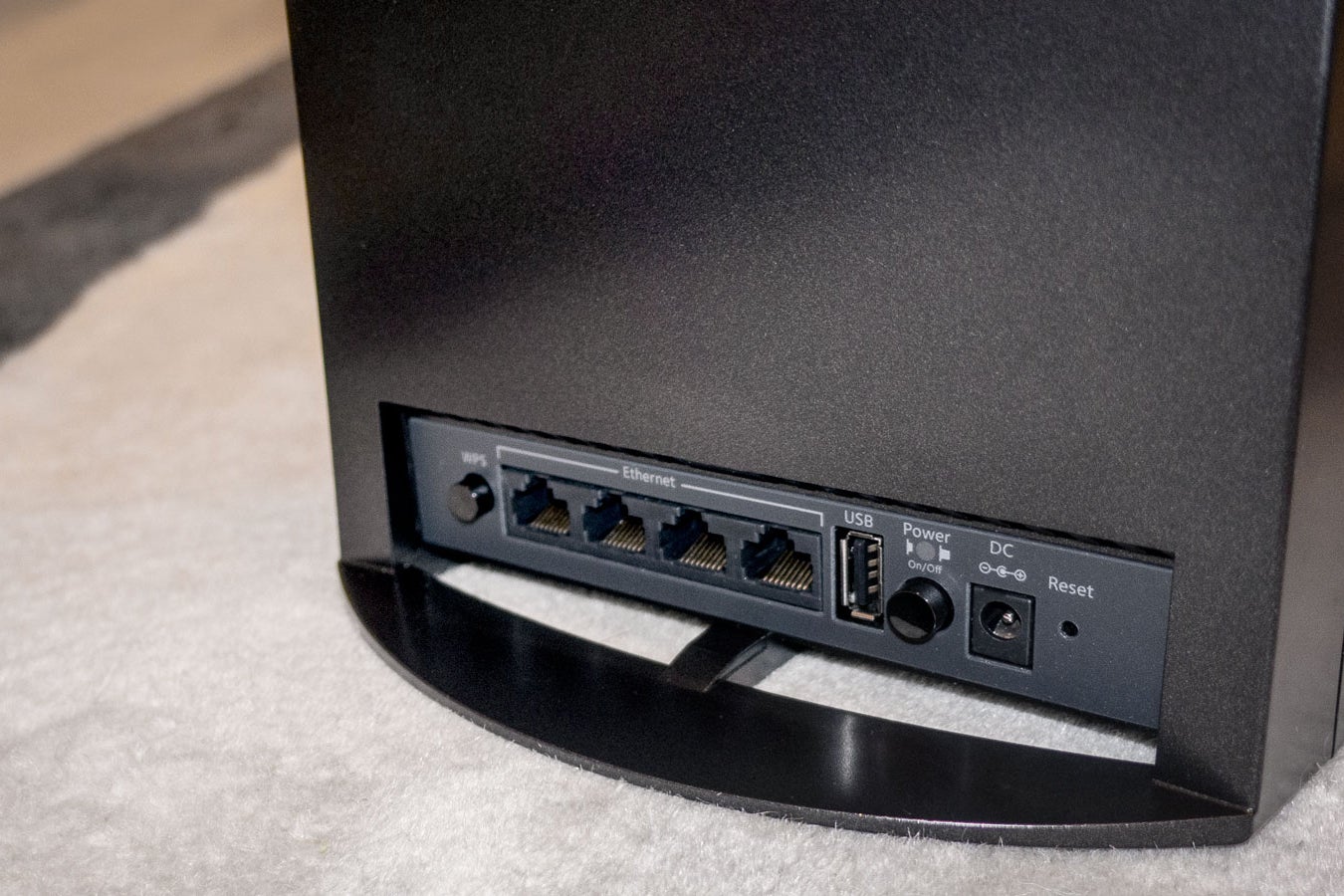 There’s even a built-in DLNA server, which can stream video files from the Nighthawk directly to a computer, phone or smart TV. Just be warned that the X6S extender weighs a mere 0.86kg, so if you accidentally yank a cable, the whole unit is liable to get pulled out of place.

Management is taken care of via Netgear’s familiar web portal. Here you can decide whether to clone the SSID and passphrase from your router – enabling your devices to switch seamlessly onto whichever has the strongest signal – or apply separate settings, so you can choose exactly what connects to what. There’s a guest network too, which you can enable to keep visitors or untrusted devices isolated from your personal devices. While there are no device-specific parental controls, you can set the extended network to turn off and on at preset times. 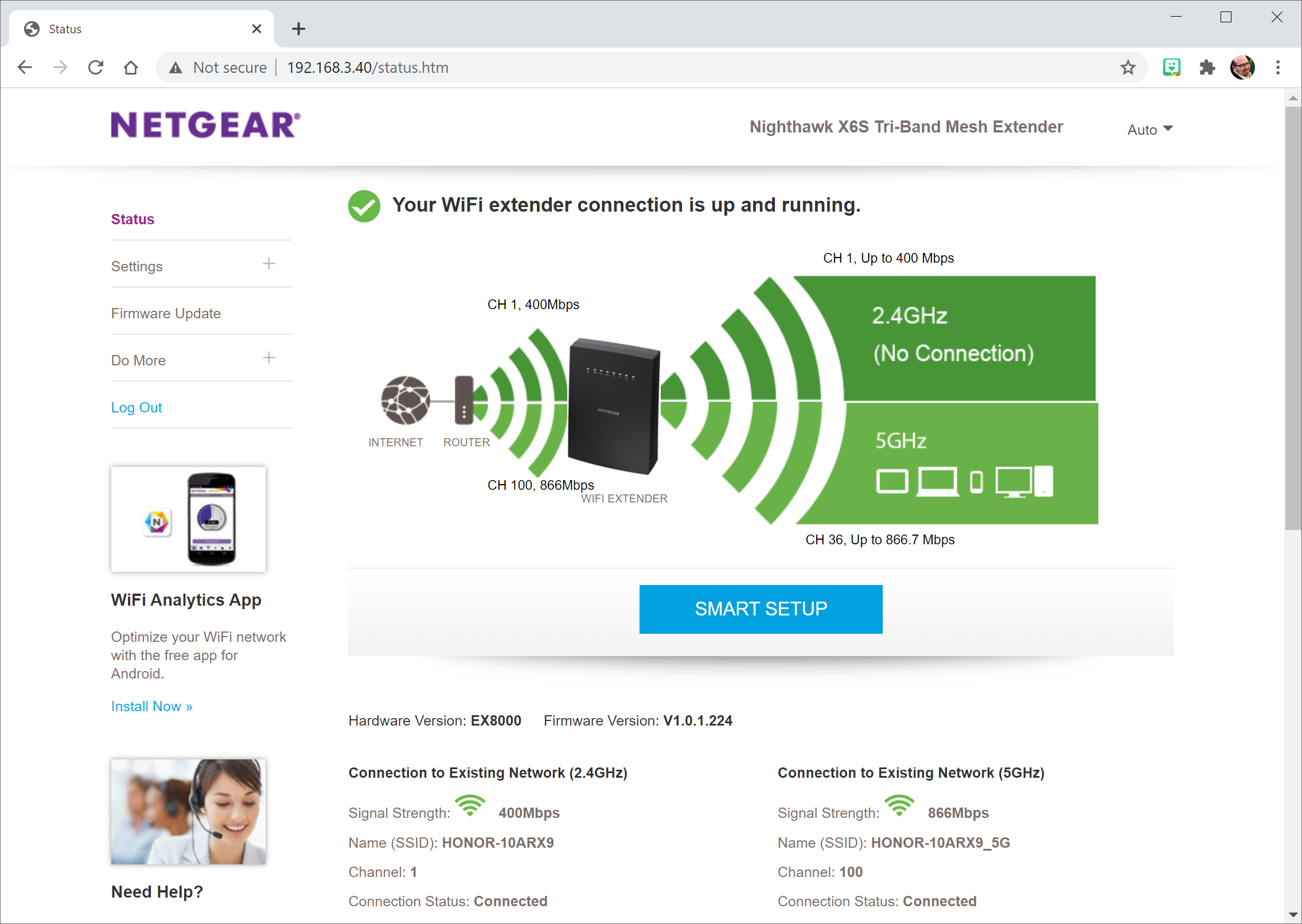 It’s also good that you can choose to disable the WPS button at the rear of the X6S and use PIN-protected access instead. The push-button connection model is convenient, but it’s a security risk if your extender is situated within reach of untrusted visitors.

Netgear boasts that the Nighthawk X6S delivers “ultimate” performance: in reality it’s not as fast as the latest Wi-Fi 6 models, but for 802.11ac networks it could well be the fastest extender on the market.

I tested this by setting up the X6S in the central hallway of my home, then using a laptop running TamoSoft’s free Throughput Test tool to measure speeds in various areas of the house. I have to say, I was impressed: out on the rear terrace, I got gobsmacking download speeds averaging 338.4Mbits/sec – well over three times the 94.3Mbits/sec I got from connecting directly to my router.

That success was repeated in the bedroom. Where before I had been getting 92.4Mbits/sec downstream from my router, the X6S again more than tripled that, to 294.3Mbits/sec. And in the bathroom, where my router managed just 42.6Mbits/sec, the X6S extender came through with a magnificent 239.4Mbits/sec – more than a fivefold improvement.

It’s worth noting that upload speeds didn’t see such huge gains. The upstream connection was also faster, but only by around 70%; to be fair, this probably reflects the limitations of Wi-Fi hardware in my laptop, rather than any shortcoming of the X6S extender.

Bear in mind too that not everyone needs to shell out for the very fastest connection: according to Netflix, 25Mbits/sec is enough to stream 4K HDR video. You may find that a cheaper and more discreet repeater gives you all the speed you need. If nothing but the best Wi-Fi 5 extender around will do, however, then look no further; if you’re after something cheaper our best Wi-Fi extenders guide can help. The Nighthawk X6S is a cracking upgrade for your home network, with ludicrous performance and an excellent set of features.