The Nighthawk X4S extender is expensive for a Wi-Fi repeater, but it delivers excellent performance. Those distinctions are both down to its tri-band design, which uses not one but two 5GHz radios, along with a 2.4GHz one for older devices. That translates to a big bandwidth boost over the majority of cheaper extenders, which make do with a single 5GHz radio. Physically, the Nighthawk X4S is a chunky unit and it only supports Wi-Fi 5, rather than super-fast Wi-Fi 6. It has little in the way of advanced features, either. For what it is, though, the Netgear Nighthawk X4S is a terrific piece of kit. It delivers excellent Wi-Fi performance while being cheaper and easier to install than a full-blown mesh system.

If you suffer from patchy Wi-Fi at home, a repeater is normally the simplest solution. These little devices plug into an electrical socket and rebroadcast the radio signals from your router, providing a stronger, faster connection in areas where the router’s own signal is weak.

Most repeaters do this using a single 5GHz radio, which has to share its bandwidth between talking to your clients and connecting back to the router. The Netgear Nighthawk X4S Tri-Band Wi-Fi Range Extender adds a second 5GHz radio, which allows it to maintain a full-speed connection to your wireless clients while forwarding their traffic to the router over a second, separate full-speed connection. This pushes up the price, but it also helps deliver peak performance.

Netgear Nighthawk X4s design and features – Chunky build, but easy to set up

The angular design of the Nighthawk X4S isn’t ugly, but it’s bulky enough to limit what you can plug into an adjacent socket. And despite its size, there’s no support for wired network connections, which is a shame. What it does feature is a helpful row of blue LEDs along the top, which show your network status at a glance, and on the side is a WPS button, which you can use to connect devices to the network without having to enter a password. 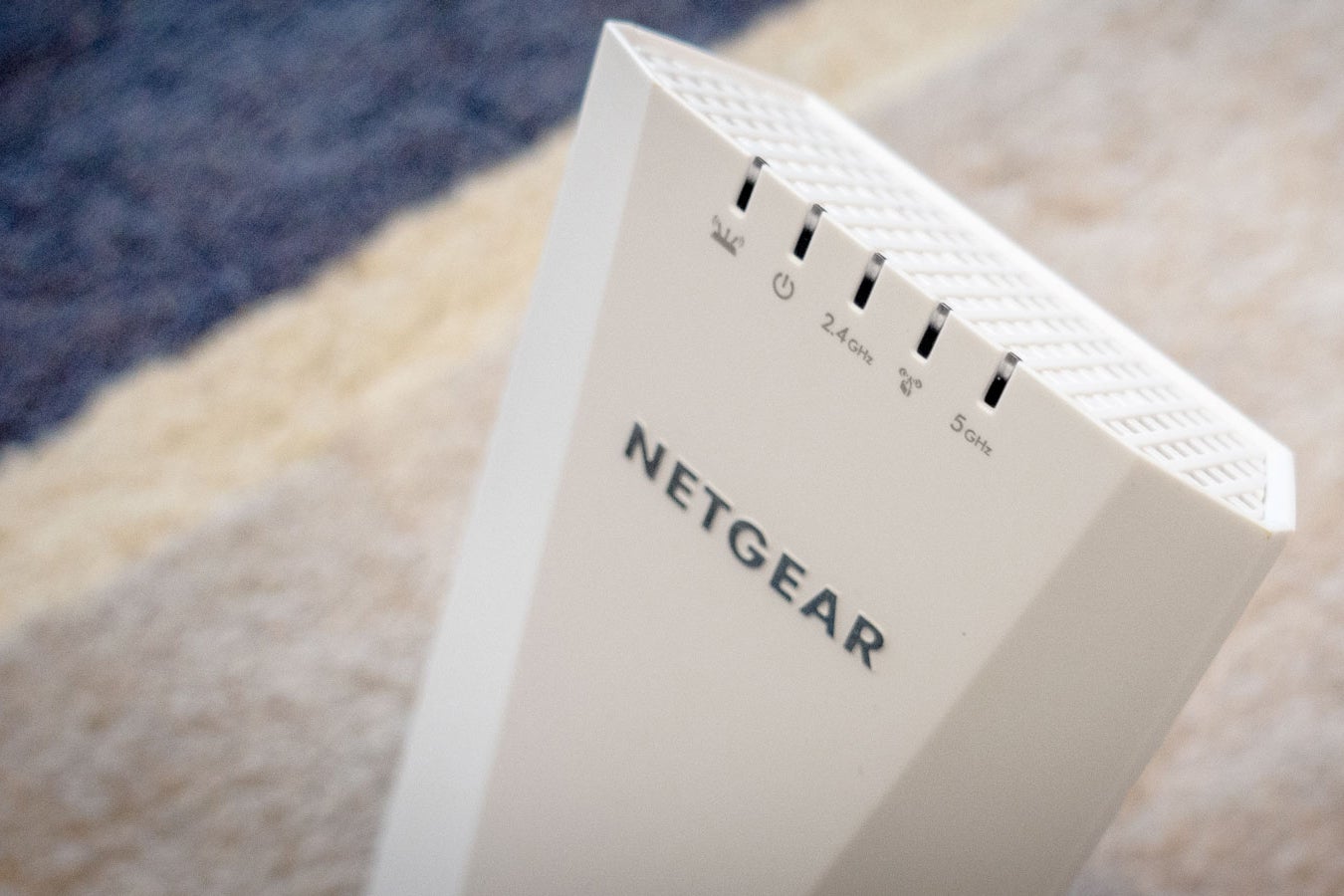 Setup and configuration are handled via a dedicated web portal. You can choose whether to split or combine the 2.4GHz and 5GHz networks – and, optionally, give them the same name as your existing network, which allows your mobile devices to automatically switch to whichever signal is strongest as you wander around your home. Most extenders can’t do that and have to have their own network name, which gives the X4S a feature you’d normally find in a mesh network. 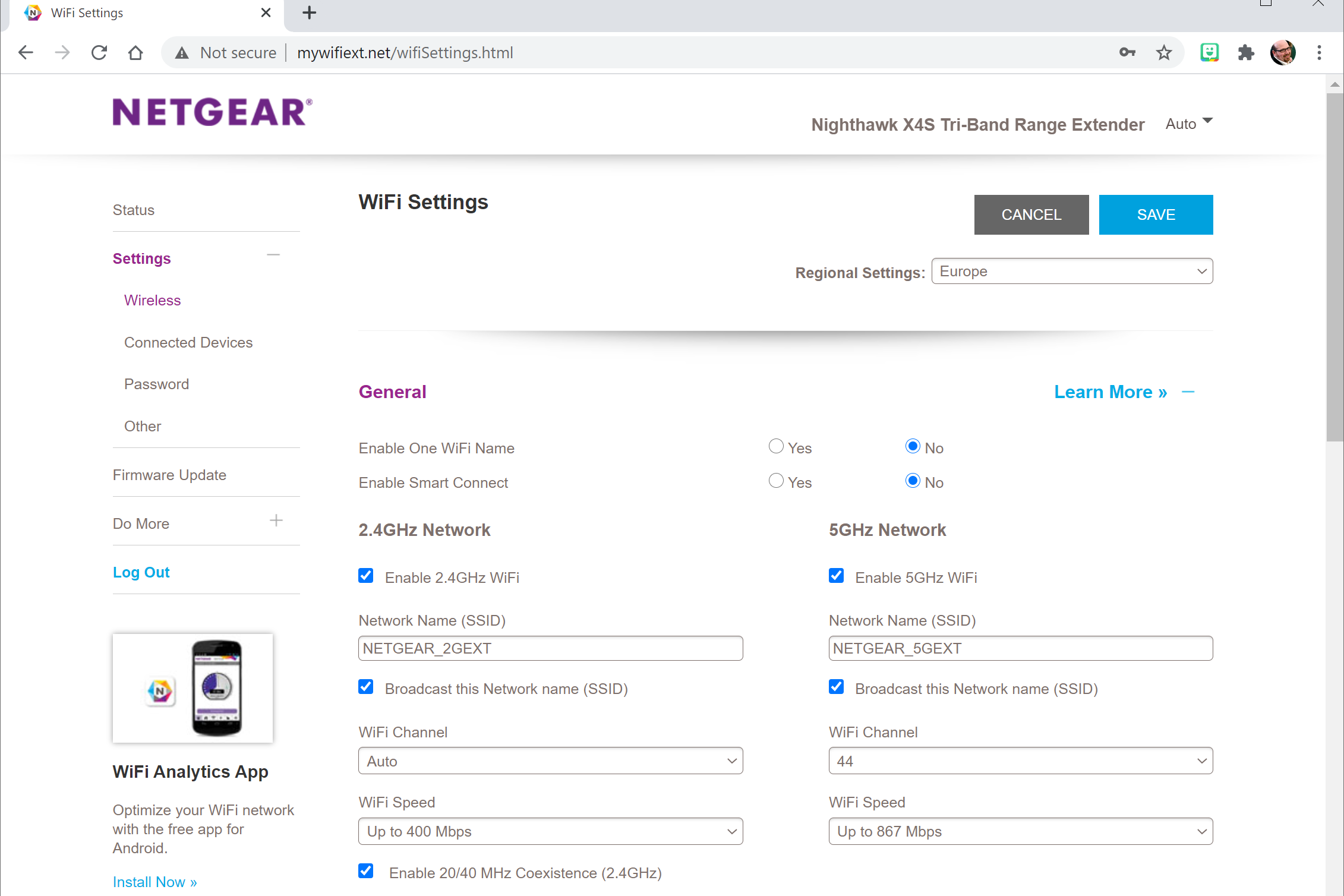 There’s also an option to automatically turn the wireless network off and on according to a custom schedule, but there’s no way to block specific devices at certain times, short of switching to the Connected Devices page and disabling them manually. There’s no guest network option either, although we doubt that will be a deal-breaker for many people. 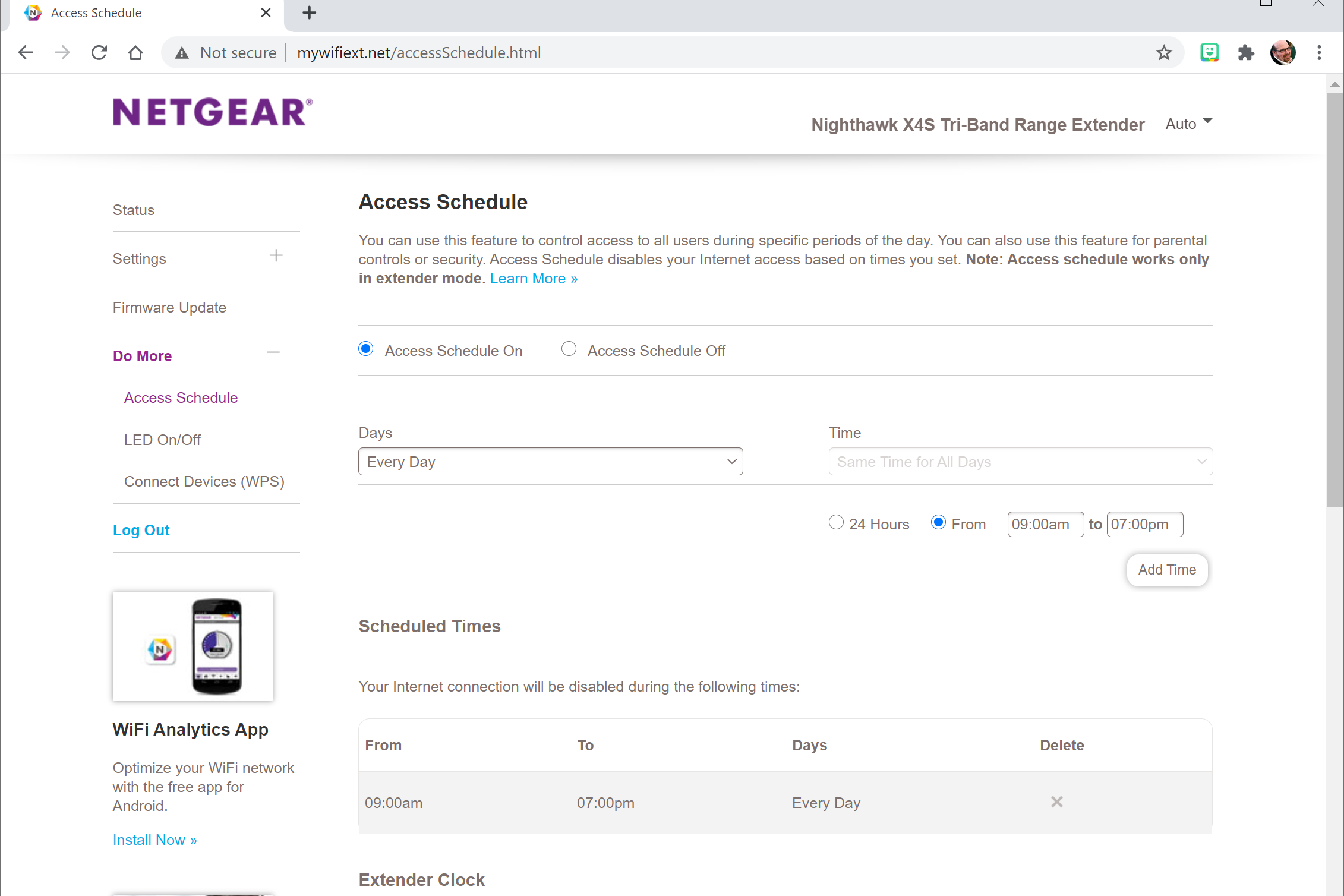 Netgear advertises the X4S as offering connection speeds up to 2.2Gbits/sec – but that’s misleading, since it represents the combined bandwidth of all three radios running at their theoretical maximum data rates. Even so, there’s no denying that the X4S can give your network a real boost. Running the free TamoSoft Throughput Test tool on a laptop at the back of my home, I saw average upload and download speeds of 63.6Mbits/sec and 94.3Mbits/sec over a 5GHz 802.11ac connection directly to my router.

After I’d set up the X4S in the hallway in the middle of the house, the extended network gave me a slower upload rate of 37.5Mbits/sec, but downloads arrived at a far faster 156.3Mbits/sec.

Things were even better in the bedroom, where download speeds of 92.4Mbits/sec were accelerated to 220.8Mbits/sec. In the hard-to-reach bathroom, the X4S delivered a simply phenomenal uplift: its download speed of 187.4Mbits/sec was more than four times as fast as the 42.6Mbits/sec I saw from the router alone.

Stellar performance goes a long way to justify the high price of the X4S. If you really want the very fastest connection possible, remember that this is only a Wi-Fi 5 extender, and can’t match the performance of a Wi-Fi 6 system, such as the Netgear EAX80. That’s more than twice the price, though – and the X4S is perfectly fast enough for 4K video streaming and other bandwidth-heavy tasks, making it the ideal upmarket extender for most homes.